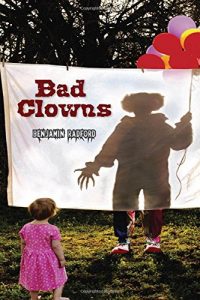 Who knew naughty clowns could be so interesting? From mischievous and bizarre to disturbing and dangerous, the wayward jester, it turns out, makes for a fascinating topic of study. With his wildly fun and surprising book Bad Clowns, Benjamin Radford wipes away the greasepaint and skillfully illuminates the weird world of clowns gone wrong. He makes it clear up front that he has no animosity toward clowns of any ilk. Radford simply wanted to understand this strange human phenomenon.

The author describes his goal in writing the book was to produce a “mostly serious blend of academic scholarship, pop culture critique, folklore and urban legend research, psychology, and sociological analysis.” He succeeded. Bad Clowns is a near-perfect collection of all those things and more. Too much emphasis on one or two academic concerns and the book would not likely have been able to hold the great charm and humor that it does. Too little attention to history and psychology, however, and it likely would feel too silly or trite for serious readers. As one who enjoys all history, for example, I appreciated Radford’s inclusion of a general survey of world clown history.

Although bad and scary clowns are perhaps more prominent in pop culture today than ever before due to their inclusion in many horror films, Radford reports that there is no clear evidence that fear of, and anxiety about, clowns has risen in recent decades. We can’t know this because there is no data from generations past with which to compare. Regardless, it seems to be an extraordinarily small problem in terms of population percentage affected. Radford explains that it barely shows up in medical and psychological research. “Coulrophobia” (fear of clowns), for example, is not even a recognized phobia by psychologists and mental health experts. This is not to say it is not a real and serious problem, only that it is extraordinarily rare.

True to his stature as one of the world’s most accomplished and respected skeptical investigators, Radford pays due attention to unfounded hype and hysteria. There are many cases of exaggerations, misinterpretations, and outright lies fueling irrational fears and controversies. Radford explains them away with expert precision. An important point Radford makes, and deserves repeating here, is that depraved or criminal clowns are the exception, not the rule. As he writes, one is more likely to win the lottery than encounter a truly evil clown. But this book is not dedicated solely to exposing myths and frauds. There really have been genuinely bad people who dressed up as clowns. Some of it is entertaining—Bozo has a bad day; Ronald McDonald sparks social protests—and some of it is deeply disturbing.

John Wayne Gacy, the infamous serial killer who sometimes performed as a clown at children’s birthday parties, is often held up as Exhibit A in the case against bad clowns. Gacy was convicted and later executed for killing more than thirty people, twenty-eight of whom he buried or hid on his property. To this day, many articles and documentaries about him suggest that he was the ultimate “killer clown.” But was he? Radford keenly identifies a problem with this portrayal: Gacy was never a professional clown. He was a building contractor who only occasionally did clown gigs. He is not known to have killed or abducted anyone while wearing a clown suit and makeup. The clown angle, Radford concludes, was irrelevant to his serial killer activities. But the news media continues to find the jarring contrast of brutal killer and birthday party clown irresistible.

Radford presents another glaring case of misleading journalism fueling the bad clown concept. It came out of news coverage of the mass shooting at a theater in Aurora, Colorado, in 2012. The killer, James Holmes, was reported to have been inspired by the Joker (Batman’s archenemy and perhaps the most famous bad clown in all of fiction). Radford reveals, however, that this was yet another “media-created myth.” There was no mention of the Joker during Holmes’s trial, and nothing about the Joker emerged from the intense and extensive investigation into his past and motivations for the crime. Even Holmes’s own notebook, containing written plans for the attack, did not include any mention of the Joker.

Lest you think yourself safe, Radford offers a surprise word of caution for all of us: Bad clowns may be on the rise. He connects troublesome clowns of decades and centuries past with contemporary online trolls: malevolent people who seek enjoyment or thrill through annoying, tormenting, and scaring people in cyberspace may be the new nasty jesters of our time. You have been warned.

There is so much in Bad Clowns that everyone, from casual clown fans to hardcore skeptics and academics, will find plenty to both entertain and enlighten.


Bad Clowns. By Benjamin Radford. Albuquerque, NM: University of New Mexico Press. 2016. ISBN 978-0-8263-4666-6. 188 pp. Paperback, $24.95 Who knew naughty clowns could be so interesting? From mischievous and bizarre to disturbing and dangerous, the wayward jester, it turns out, makes for a fascinating topic of study. With his wildly fun and surprising book …