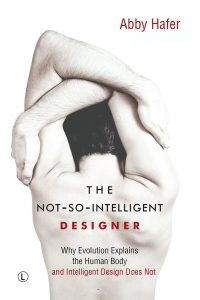 Intelligent design (ID) maintains that some features of the natural world are best explained by an intelligent cause (presumably God?) rather than by the natural process of evolution. That’s nonsense; evolution explains the natural world much better. Abby Hafer has a doctorate in zoology and teaches human anatomy and physiology at Curry College. She was incensed by the claims of ID, so she wrote this book explaining the history and claims of ID, conclusively debunking it, and demonstrating that no intelligent designer could have created a human body with so many design flaws.

Hafer exposes the religious agenda of the creationist Discovery Institute as revealed in the infamous “Wedge” document and shows that the individual members of its staff disagree about almost everything. Some believe Earth is only 10,000 years old; others accept that it is billions of years old. Some believe every species was individually created by God; some accept that humans and chimpanzees have a common ancestor but say that doesn’t explain the differences between the species. Some are HIV/AIDS denialists. Hafer comments, “I’m not sure that they could agree among themselves that gravity makes things fall down.” There is only one thing they agree on: they want your children to be taught ID as science and expect you to pay for it.

Hafer chose to describe ten simple design errors, though there are many, many more. Because sex sells, she starts with a sexy example; she points out human testicles are positioned outside the body. Why? Because the human body is too hot for sperm production. That puts a vulnerable organ in a vulnerable position and creates all sorts of inconvenience. But the supposed creator designed some animals with retractable testicles and some with testicles that reside permanently inside the body, including frogs and elephants. Birds have a higher body temperature than humans, and yet they have internal testicles. Hafer asks whether the designer likes turkeys better than us and wonders if the designer is a turkey.

Her other examples of bad design include:

This is not intelligent design. The only logical conclusion is that the designer is incompetent or favors other animals above humans, but ID proponents don’t seem to recognize that.

There are many other flaws Hafer could have covered, but she opted for economy to leave room for an impassioned defense of science and a full rebuttal of ID. For those who want to know more, Nathan Lents covered many more flaws in his book Human Errors: A Panorama of Our Glitches, from Pointless Bones to Broken Genes.

Hafer includes a cogently argued defense of science and evolution and shows how science denial causes harm. She provides a two-part Handy Dandy Intelligent Designer Refuter with answers to every point ID proponents might bring up in an argument. She spends considerable time refuting the “irreducible complexity” argument, explaining how the eye and the flagellum evolved. She ridicules ID promoters for not knowing the difference between a cilium and a flagellum and not knowing that bacteria don’t have cilia. The very organism that creationist Michael Behe writes about is a living refutation of his claims about irreducible complexity. It has a system for building a flagellum that is reducible, and he doesn’t seem to know about this. It is inexcusable that he didn’t do his homework.

Hafer refutes the “academic freedom” argument: “Even college professors do not have the freedom to teach anything they want any way that they want.” She notes that she was hired to teach anatomy and physiology, and she would lose her job if she taught Mark Twain instead. His work is fiction, and she is supposed to teach science.

She refutes the “teach the controversy” argument. We don’t need to teach the flat-earth “controversy.” She comments, “I pity any passenger on an international jet liner whose pilot truly believes that the earth is flat. It could end tragically.” Of the creator’s flawed design, she asks, “Even Detroit does recalls. Why can’t God?”

The Not-So-Intelligent Designer is packed full of information about human anatomy, other animals, and animals that shouldn’t exist according to ID. The many illustrations and the snarky sense of humor make it a delight to read. It’s less than 200 pages, and the chapters are short and easy to digest. Hafer ends by saying she thinks our bodies are beautiful the way they are, regardless of their imperfections, and there is real beauty in our ability to really understand the world instead of just making things up. She says evolution is “the greatest indisputably true story ever told.” She wonders if she is preaching to the choir but says the book’s information and arguments are exactly what the choir needs to defend evolution against pseudoscientists and political pressure groups. ID is an anachronism that has no place in the twenty-first century.


The Not-So-Intelligent Designer: Why Evolution Explains the Human Body and Intelligent Design Does Not. By Abby Hafer. Eugene, Oregon: Cascade Books. 2015. ISBN: 9781620329412. 244 pp. Paperback, $31.00.  Intelligent design (ID) maintains that some features of the natural world are best explained by an intelligent cause (presumably God?) rather than by the natural process of …