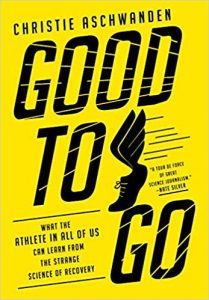 The more desperate people are to achieve some goal, the more likely they are to fall prey to quack and pseudoscientific treatments or aids. Thus, the seriously ill are often easy targets for quack medicine. Parents of autistic children are taken in by a whole range of fake treatments and cures. But the ultra-healthy can also fall into this sort of trap. By the ultra-healthy, I mean individuals heavily involved in professional sports or amateur athletics. In the new book Good to Go, Christie Aschwanden provides an excellent survey of the variety of crazy regimens used by athletes to speed and aid recovery after training.

The often very expensive gimmicks and gadgets that athletes—professional and otherwise—use to enhance recovery after a training session are little more than expensive placebos. Some can cause real harm. The book covers a plethora of practices, both well-known and widely accepted in the training community by coaches, trainers, and athletes alike as well as some that are less well known and bizarre. In the former category is drinking copious amounts of water. Aschwanden reviews the evidence that shows that if you’re not thirsty, you don’t need to drink a lot more water. Hyperhydration, or water intoxication, is a real problem that leads to hyponatremia. Pay attention to what your body (specifically your hypothalamus) is telling you, not what some coach or trainer is advising. Then there’s Gatorade and all the other sports drinks, widely accepted as an almost necessary part of any recovery or training program. But “the dazzling powers that sports drinks display in the studies touted by their makers may be nothing more than the placebo effect” (39) because “studies using plain water for the control group found positive effects, while the ones that used taste-matched placebos didn’t” (40).

In the category of less well known and bizarre is cryotherapy. That’s where you get in an enclosed box where the air is cooled to as much as 250 degrees below zero Fahrenheit. Granted, you don’t stay in the cryotherapy box long, just long enough to feel it—and rack up a hefty bill on your credit card. There is no evidence whatsoever that such gimmicks have any beneficial effect other than a placebo effect. It must be noted that it would be next to impossible to carry out truly blind placebo studies of some of the treatments discussed in the book. For example, how could you subject someone to 250-degree-below-zero temperatures without them knowing it? And how about the Tom Brady–endorsed “TB12” pajamas, for a mere $199.98 a set? What makes these so wonderful? They contain a bioceramic powder that “supposedly absorbs body heat and reemits it as far infrared radiation” (139). This is exactly the type of pseudoscientific gibberish that Gwyneth Paltrow’s company Goop throws around and gets (completely) justified ridicule for. Obviously, this sort of nonsense can be used to sell overpriced crap to healthy, wealthy, worried athletes as well as to healthy, wealthy, and worried non-athletic women..

Even when a sports product probably has beneficial effects, the same benefits can be obtained much more cheaply by buying generic equivalents. A company called Advocare sells expensive post-workout recovery shakes containing carbohydrates, protein, and calories. One would get “approximately the same nutritional value from a bowl of Greek yogurt and a banana” (168) as one would get from the Advocare shake. Aschwanden skewers several more such scams aimed at the sporting crowd. But one thing that makes her book so appealing is that she tried all of these things herself to see if they had any effect for her. They did not. What makes her personal evaluations of these products especially important is that she is a highly trained sportswoman, having excelled at running, cycling, and skiing. She is no stranger to the culture of extreme training and the desperation of those who think they need just that tiny little bit of extra advantage to win the next race.

Chapter 8, “Selling Snake Oil,” is devoted to dietary supplements. It will come as no surprise to readers of this magazine that such supplements are worthless. The author addresses why supplements are such a big deal in sports. In addition to the ever-present placebo effect and peer pressure, another answer is strong-arm marketing. “Supplement makers bring money to the table, and they spread this money around—to organizations, coaches, trainers, teams, and individual athletes. Along the way, a lot of people get a chance to make a buck” (183). Even the International Olympic Committee has recognized that athletes use supplements “based on unfounded beliefs” and because of people who are “influential rather than being experts” (183). Worse, supplements are often contaminated with performance-enhancing substances that are banned by various sports agencies. Aschwanden recounts a case where an athlete took such a supplement, not knowing that it was contaminated, and was banned from the sport in question for a length of time.

Good to Go is much more than an excellent description of the foolish gimmicks that sports enthusiasts will buy. Aschwanden, with no references at all to the skeptical literature, makes all the right points about how to evaluate dubious claims of scientific support for any treatment. The first chapter is a lovely description of her own involvement in a study to see whether drinking a little beer after a “hard” training run would be beneficial. She goes through the difficulties of picking a valid dependent measure, of defining what constituted a “hard” training exercise, how to assign individuals to a control versus an experimental group—in short, all the issues that crop up in any experiment testing the effects of some manipulation. The results of the study showed that drinking a little beer was beneficial but only for the females in the study.

Aschwanden then proceeds to beautifully take apart her own study, pointing out that there was a very small sample size, that there were problems with the placebo drinks used, and that the finding that beer was beneficial for women but not for men was probably a false positive error. She then discusses the fact that the great majority of studies finding benefits of some sports-related manipulation suffer from these same problems—small samples, isolated findings, and dodgy statistics. The file drawer problem is also mentioned, demonstrating that it’s easier to get studies showing a difference between conditions published than it is to get a study published that didn’t find any differences. Marketers love small, cheap, and badly done studies because these are just the ones most likely to conclude, incorrectly, that the gimmick being tested has a positive effect. The study can then be cited as “scientific” evidence that whatever is being sold really works. Along these lines, Aschwanden makes the very important point that one study can never settle an issue. Science advances at a slow pace, and no single study can ever be definitive. This chapter alone is worth the price of the book. I plan to use it in any class I teach where understanding the basics of research methodology is important.

Many athletes work as hard on recovery after training as they do during training. There is a large market for tests that claim to be able to detect effects of overtraining. These are covered in a chapter titled “The Magic Metric.” Many of these tests have multiple measures. If one takes enough measures on a perfectly normal individual, just by chance one or more will show something “abnormal.” One such test is “Blueprint for Athletes,” a blood-based test sold by Quest Diagnostics. True to form, Aschwanden subjected herself to this test, in which someone comes to your home and draws blood that is then analyzed for abnormalities. The test generates forty-three different measures. Out of that many measures, it is very likely that one or two will be “abnormal” even if nothing is wrong. Sure enough “my eGFR [estimated glomerular filtration rate] was low and my creatinine was high” (211). But “my numbers were only slightly off, and probably not a cause for concern” (211). From a marketing standpoint, having a lot of measures makes it much more likely that the individual can then be sold some supplement to correct that “abnormal” finding that isn’t of any real concern in the first place.

So if all the gimmicks, rituals, and supplements athletes engage in to improve their performance and recovery are little more than expensive placebos, does anything work to help recover from a stressful workout session? The answer is a comforting “yes” that carries with it minimal expense. As noted earlier, water is important—regular water, not sports drinks—and no more water than is needed to quench the thirst. The other important recovery aid is sleep. Aschwanden’s review of the research on recovery shows that many athletes work nearly as hard at recovery as they do in their original training. That’s counterproductive and can cause anxiety about working hard enough to recover from training. Recovery should generate less anxiety, not more. Just taking time off from training and getting adequate sleep and relaxation is vital. Further, training itself should increase in difficulty gradually—no spurts when the athlete jumps rapidly to a new, much higher level of exertion.

Good to Go is a valuable contribution to the skeptical literature because it covers an area in which outlandish health claims have not previously been subjected to any, or at least much, critical analysis. Athletic health quackery is clearly an area in which much skeptical thinking is needed.