The 1986 explosion of the Number 4 unit of the nuclear power station at Chernobyl, Ukraine, was the worst nuclear accident in history. The accident and the costs of responding to it are credited with a major role in the collapse of the Soviet Union three years later. This accident is relevant to decisions made today about the role of nuclear power in a low-carbon energy strategy. It is therefore timely that HBO has produced an excellent five-part dramatic miniseries simply titled Chernobyl. On July 16, Chernobyl received nineteen Emmy award nominations.

The HBO series does an outstanding job of presenting the technical and human issues of the accident. Only at the end of the last segment is there the sort of summary one might expect in a documentary. Instead, this production is a scripted drama, depending on the characters and events themselves to carry the message. It focuses on three individuals: academician Valery Legasov, the scientist who best understood the frightening implications of the reactor explosion; Boris Shcherbina, deputy chairman of the USSR Council of Ministers, who led the response to the disaster; and a composite character representing the input of other scientists.

The story is confined to the first two years, which saw a massive mobilization of effort across the USSR to contain and remediate the damage. The film skillfully uses dialog to inform the audience on technical issues, such as the explanations by Legasov to Shcherbina of how a nuclear reactor works and to Gorbachev on the dangers of radiation. The testimony at the trial of plant managers for dereliction of duty is also informative, creating a gripping narrative. 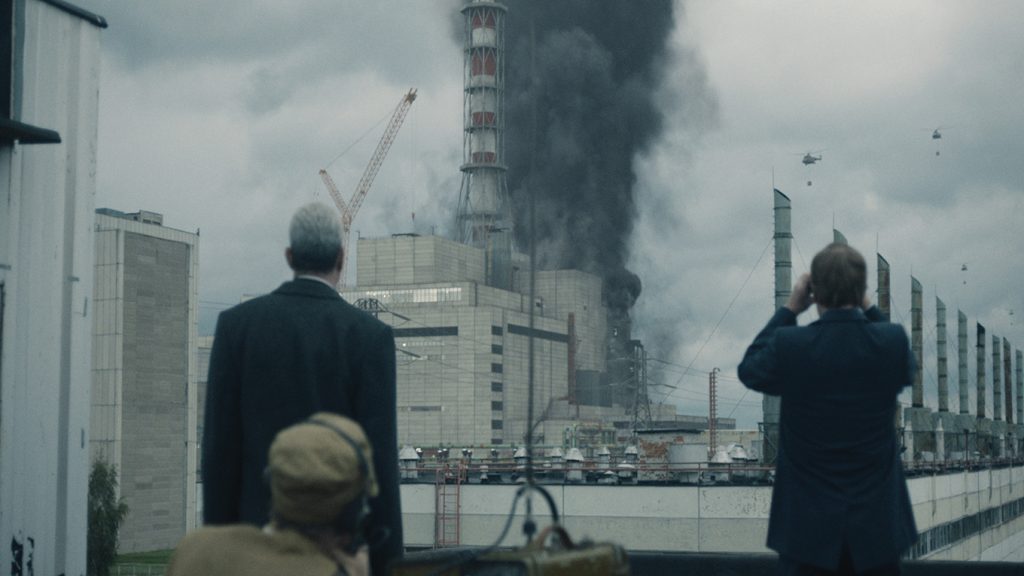 I was struck by the attention to accuracy in the film. I have visited (as a tourist) both the Chernobyl plant and the nearby “science city” of Pripyat where 50,000 plant employees worked, and I was initially amazed at the authenticity of the images. Only part way through the series did I learn that the USSR had adopted a standard model for the architecture of such new cities and that several had been built within the USSR that followed this design. The filmmakers used a nuclear plant in Lithuania and its associated “science city” as stand-ins for Chernobyl and Pripyat.

The film makes excellent use of dramatic vignettes to advance the story. In addition to following the fate of first responders, many of whom died from acute radiation sickness, we see short segments on the men who volunteered for a suicide mission to drain radioactive water from the reactor; coal miners recruited to tunnel underneath the burning reactor; military draftees who cleared radioactive debris from the adjacent building, receiving a lifetime near-lethal radiation dose in just ninety seconds; hunters assigned to kill the surviving dogs from Pripyat; and efforts to convince a ninety-year-old woman to leave her farm when the “exclusion zone” around the nuclear plant was established.

This is a story of heroism and stupidity, of the consequence of a bad initial design for the reactor, and of overcoming efforts within the government to cover up the magnitude of the disaster. Both Legasov and Shcherbina are faced with the herculean task of responding, and ultimately a substantial fraction of the human and material resources of the USSR were committed to the task. As a government scientist myself, I especially appreciated the way individuals from very different backgrounds (party boss, military, and scientists) learned quickly to work together to deal with this unprecedented threat.

The series does not answer fundamental questions about the consequences of exposure to moderate radiation levels, and there was never an adequate follow-up to determine the effects on the millions, including the population of Kyiv, who were exposed. That issue remains a point of contention as we consider the role of nuclear energy in a carbon-free world.

The Soviet RBMK reactors were the primary civil nuclear energy source for the USSR. They were rushed into production and assumed to be entirely safe, a reactor design that could not fail. Therefore, the government saved money by having no containment such as was used elsewhere in the world. It was their faith in the safety of the RBMK that caused initial disbelief that the reactor had exploded and consequent delay in evacuating Pripyat and its 50,000 inhabitants, as dramatized in the film.

To learn more, two excellent recent books on the Chernobyl events provided background for the HBO film: Midnight at Chernobyl by Adam Higginbotham and Chernobyl, the History of the Nuclear Catastrophe by Serhii Plokhi.