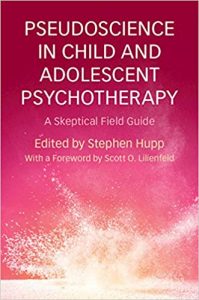 Pseudoscience in Child and Adolescent Psychotherapy: A Skeptical Field Guide is a new book with multiple authors edited by Stephen Hupp. They point out that “It is difficult to prove that something works, especially in the field of psychotherapy, and particularly in attempting to help children.” There is little research on children, and research in adults may not apply to children. This very useful book addresses this neglected field. It does a wonderful job of separating psychotherapeutic treatments that have been scientifically proven to work and therapies that are based on pseudoscience.

Nineteen chapters by skeptical experts address everything from tics to toileting, from depression to anxiety, from sleep to substance abuse. The first chapter is an introduction to critical thinking about psychotherapy, covering pseudoscience and skepticism, plausibility, and good science. Each chapter covers myths, questionable ideas, and treatments that are implausible, ineffective, or harmful. Then it explains which therapies are supported by good scientific research, followed by a succinct conclusion. As a bonus, each chapter features a sidebar by a prominent interdisciplinary science communicator on peripheral subjects such as dolphin-assisted therapy, gay conversion therapy, fear of GMOs, alien abduction, and breatharians. Four of the sidebars were contributed by authors who have also written for Science-Based Medicine, and others are by skeptics who have spoken at national conferences, such as Britt Marie Hermes and Sheldon Helms.

As an example, here are some of the implausible, untested treatments they list for anxiety: homeopathy, crystals, thought field therapies, moxibustion, Tappy Bear (a really silly idea that was new to me), acupuncture, and neurofeedback video games, including MindLight.

The book is full of fascinating information and is extensively referenced. Joe Nickell reveals that breatharians have been caught making nighttime forays for junk food. Indre Viskontas debunks the idea that children should be taught based on their preferred learning style; in fact, research has shown that conditions that make learning seem more difficult are actually more effective for long-term retention. Medications for ADHD may be more effective if behavior therapy is implemented first. The Brain Gym program has been widely adopted by schools but is not supported by evidence. Tics are a brain disorder, not a spinal disorder that could be corrected with chiropractic adjustments; nevertheless, some chiropractors try.

Treatment of psychosis has evolved from “maintenance” to “recovery” with coordinated specialty care programs that have been proven effective in randomized controlled trials. The evidence for cognitive behavioral therapy is good but not perfect; scientific conclusions are provisional and subject to revision as new data comes in.

Phobias describe behavior but don’t explain it: Sally runs away when she sees a dog because she has a phobia. But that’s circular reasoning. Why does she behave that way?

The book also discusses pitfalls in research; if you add a placebo to cognitive behavioral therapy (CBT), the results will seem to improve, but that doesn’t mean the placebo is an effective treatment. Tolerating pseudoscientific treatments degrades the profession; failing to act is condoning fraud. One of the reasons pseudoscientific practices proliferate is that evidence-based practices are underutilized.

Obsessive compulsive disorder (OCD) involves rituals, and rituals can have psychological benefits even if they are not based in reality. In Heart Centered Hypnotherapy, therapists use past-life regression to “wash off the child” that was dirtied, which supposedly cures OCD. When a pseudoscientific treatment fails to work, proponents often come up with ad hoc hypotheses. The American psychologist Roger Callahan developed a pseudoscientific therapy he calls “thought field therapy,” using fingers to tap on various spots on the body. He explained his failures by positing “individual energy toxins,” which could be any substance consumed or inhaled, including common foods. He made patients severely restrict their diets for no good reason.

Some attachment therapists claim that emotional attachment of infant to mother occurs prenatally as a result of telepathic communication that begins at the time of conception. Apparently, positive research exists for eye movement desensitization and reprocessing (EMDR)—but only because the research methods were flawed and because factors such as patient engagement are common to all successful psychotherapies.

Eating behavior responds to reinforcement, but studies have shown that rewards for eating are counterproductive. Crib bumpers were designed to prevent infants from getting heads or limbs stuck between the slats are no longer needed because safety regulations have changed the size of crib slats. But they are still being sold and have been implicated in several infant deaths.

The last chapter says, “The mind is a terrible thing—there are so many ways that our minds can be deceived. … Reading through these chapters, it’s really exhausting to think how much time, money, and effort are spent using therapy practices that are questionable, ineffective, or even harmful.”

When the book calls an idea “questionable” that leaves the door open for some of these practices to develop an evidence base. One pessimistic writer deplores Counter-Enlightenment trends in the United States that lead people to reject or deny scientific findings: “If indeed a general anti-rationalist posture is responsible for pseudoscientific thinking about children’s mental health, it is difficult to see how the public can be convinced of the need for evidence-based treatments.”

There is an incredible amount of silliness out there, but it’s reassuring to see how many writers Hupp found who understand science and can cogently critique pseudoscience in this book. There is reason to hope that good science will prevail and that this book will be instrumental in making progress. This book would be instructive for psychotherapists, and it is an invaluable resource for parents who are trying to find an effective psychotherapy for their children and adolescents. They need all the help they can get.

This article was originally published on the Science-Based Medicine blog.