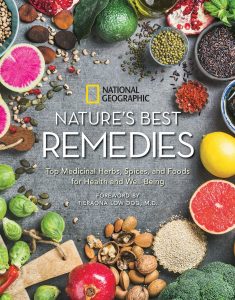 The National Geographic store proclaims, “This authoritative guide to the foods, herbs, spices, essential oils, and other natural substances that alleviate common ailments will enhance your life—from treating illness to sharpening the mind, losing weight, cleaning the home, enhancing pregnancy, and reducing the effects of aging.” No, it won’t. Its information is biased, incomplete, unscientific, and sometimes even dangerous. I am a longtime subscriber to National Geographic magazine; I enjoy the great photography and always assumed the articles provided reliable information. I can no longer trust it; this book was a bitter disappointment.

The author, Nancy J. Hajeski, is a fiction and nonfiction writer with no medical or scientific credentials. The foreword is by Tieraona Low Dog, MD, an integrative medicine specialist. As Mark Crislip famously said, “If you integrate fantasy with reality, you do not instantiate reality. If you mix cow pie with apple pie, it does not make the cow pie taste better; it makes the apple pie worse.” Integrative medicine is a marketing term designed to infiltrate quackery into science-based medicine. It accepts poor-quality evidence and tries to co-opt some of the standard recommendations of mainstream medicine such as diet, exercise, and lifestyle changes, giving the impression that only integrative medicine appreciates their value!

The book subscribes to a logical fallacy, the naturalistic fallacy: the idea that a natural remedy is inherently better than a pharmaceutical remedy. That concept is demonstrably false. It doesn’t matter whether a remedy comes from a plant or a laboratory; what matters is whether it is effective and safe. Around half of pharmaceuticals were derived from plants. Drug companies improved the natural remedy using science. They identified and isolated the active ingredient, developed a pure version with a controlled dosage, and often synthesized the active compound and altered it to improve its efficacy and safety.

This book is unreliable. I have long relied on another resource that is much more trustworthy and complete, the Natural Medicines Comprehensive Database. It covers all the published research (with citations) on vitamins, minerals, and dietary supplements. It lists adverse reactions, safety concerns, drug interactions, warnings, and more. It rates each natural medicine for effectiveness and safety. Only 5 percent are rated as “effective,” and almost all of those are vitamins, minerals, and medicines that are also available as prescription or over-the-counter products approved by the FDA. Others are rated likely or possibly effective, likely or possibly ineffective, or ineffective. Safety ratings are likely or possibly safe, likely or possibly unsafe, or unsafe. For a great many entries, they say there is insufficient reliable evidence for them to provide a rating.

In contrast, the National Geographic book describes only “health benefits.” It mentions that there are positive studies and studies that indicate that a remedy “may” have beneficial effects, but some of these are animal or in vitro studies; it provides no citations or references to help readers locate the studies and evaluate the claims. It fails to mention negative studies or adverse reactions or interactions with other remedies. It does not warn when a remedy might be unsafe during pregnancy or breastfeeding.

The first part of the book covers treatment of common ailments. The second covers individual herbs, spices, and foods. Both parts are a mixture of half-truths, speculations, false information, superstitions, and myths. I’ll provide just a few examples.

There is little or no scientific evidence for any of these. They have not been evaluated in controlled clinical studies; they are mainly “old wives’ tales.” In an article on the Science-Based Medicine blog, pharmacist Scott Gavura reviewed the research on cranberry juice and concluded: “There is no persuasive evidence that cranberries can prevent urinary tract infections.” He called it “an alternative medicine zombie that’s impervious to evidence.”

For pain, one of the recommendations is white willow bark. It invokes the naturalistic fallacy and the “ancient wisdom” fallacy, because it has been used since the fifth century BCE. It contains salicin; the dosage is difficult to control and is not very effective, and the bark also contains unwanted ingredients. Today we have a much better derivative, aspirin (acetylsalicylic acid), which is more effective, purer, is regulated by the FDA and sold over the counter, and is far more likely to supply the desired dosage. In my opinion, it is unconscionable to recommend willow bark in the twenty-first century.

For arthritis, recommendations include a smorgasbord of nonsense, such as reflexology(!), essential oils, acupuncture, turmeric, and blackstrap molasses. None of these recommendations are supported by credible clinical scientific evidence. This is not only unscientific but potentially dangerous. If the symptoms are from rheumatoid arthritis, just relieving the pain is not enough. The course of the disease can be altered by using disease-modifying anti-rheumatic drugs (DMARDs) early in the course of the disease. People who rely on natural remedies risk permanent joint damage with disability and deformity that might have been prevented with appropriate prescription drugs.

The book lists the following health benefits for turmeric: used for 4,500 years (ancient wisdom fallacy), powerful antioxidant, scavenges free radicals, reduces inflammation, prevents platelets from forming blood clots, stimulates the gall bladder, lowers cholesterol, combats infection, may prevent certain cancers, and may prevent heart attacks after bypass surgery. I happen to know quite a bit about the evidence for turmeric because I researched and wrote about it in an article for the Science-Based Medicine blog titled “Turmeric: Tasty in Curry, Questionable as Medicine.” I quoted the National Center for Complementary and Alternative Medicine (NCCAM) website’s conclusions about “What the Science Says”:

There is little reliable evidence to support the use of turmeric for any health condition because few clinical trials have been conducted. Preliminary findings from animal and other laboratory studies suggest that a chemical found in turmeric—called curcumin—may have anti-inflammatory, anticancer, and antioxidant properties, but these findings have not been confirmed in people.

The Natural Medicines Comprehensive Database reviewed all the available scientific studies for turmeric and concluded that it is “Likely Safe,” “Possibly Effective” for dyspepsia and osteoarthritis, and there is “Insufficient Reliable Evidence” to rate effectiveness for other indications, such as Alzheimer’s, anterior uveitis, colorectal cancer, rheumatoid arthritis, and skin cancer. It warns that it may interact with anticoagulants and antiplatelet drugs to increase the risk of bleeding, that it should be used with caution in patients with gallstones or gallbladder disease and in patients with gastroesophageal reflux disease, and that it should be discontinued at least two weeks before elective surgery. These warnings are important to know, but they are not mentioned in the National Geographic book.

Anyone promoting dietary supplements should inform patients that buying them is risky. Numerous independent studies have analyzed the products on the market. They have consistently found errors. Sometimes they contain a different ingredient from what the label promises. The dosage listed on the label is often wrong, with some products containing much less or even no active ingredient and others containing many times what the label says. Contaminants have been frequently found, including heavy metals, carcinogens, insect parts, and even prescription drugs. You can’t be sure what you’re getting. Buying them is a gamble akin to buying street drugs in a back alley.

It’s easy enough to cherry-pick the literature and find a study or two that supports any given natural remedy, and that is what the author of this book has done. The scientific approach is to look at all the published evidence, pro and con, evaluate the quality of the studies, and put all the evidence into perspective before assuming that the remedy is effective. A scientist would not be satisfied with a list of “health benefits” but would insist on knowing about negative studies, adverse reactions, interactions with other treatments, safety, and much more. And if it appears that a natural remedy is effective, the next question is whether it is the best choice. How does it compare to other treatment options that might be more effective and/or safer? The book provides no comparisons.

The description of the book on the Amazon website calls it “a guide to the world’s most therapeutic foods, herbs, spices, and essential oils” that will “allow the healing power of nature to energize your body and enrich your life, providing a surefire path to good health and well-being.” It calls the book “an authoritative guide.” I have shown that it is clearly not authoritative, and Amazon’s description is highly misleading. There isn’t a shred of evidence that any of these remedies will “energize” your body, whatever that means. The remedies will please those who believe the naturalistic fallacy; suggestion will lead to a placebo response and will make the user feel virtuous in the belief that they have taken action to improve his or her health. There are plenty of subjective results, but not much in the way of objective effects.

If National Geographic had presented this as a coffee table book describing folklore and belief systems, illustrated by lots of pretty pictures, I wouldn’t have objected. But they presented it as an evidence-based review of the top natural medicinal remedies, and they presented the natural medicines as effective, without mentioning what Paul Harvey would have called “the rest of the story.” This is superstition, not science. It is misleading, incomplete, and potentially dangerous. Nothing in this book can be trusted without confirmation from other, more reliable sources. National Geographic let us down. They should be ashamed.