The results of Wellcome Global Monitor 2018, a massive survey on public attitudes toward science and health, were released June 19, 2019. The Wellcome Trust in the U.K. commissioned this survey from Gallup.

Among the topics investigated were understanding of (and interest in) science and health, level of trust in science and health professionals, attitudes toward science and society (with particular attention to science and religion), and views on the effectiveness and safety of vaccines. The study was unprecedented in scale, conducted in more than 140 countries and more than 140 languages through direct interviews with more than 140,000 people. While there clearly are reasons for concern and room for improvement, the results were overall encouraging.

With the exception of vaccines, people were not asked about specific topics in science. Questions intended to assess understanding of such topics, including the evolution of antimicrobial resistance, were considered but not contained in the final survey instrument due to the difficulty of translating scientific terms into the local languages and to the deterrent effect of seeming to quiz the lay respondents. Even the survey’s definition of science as “the understanding we have about the world from observation and testing” was not fully understood by a significant minority (20 percent globally), although a large majority (81 percent globally) accepted that studying disease is part of science.

Trust in scientists and medical professionals is generally high: 72 percent of people globally expressed a high (18 percent) or medium (54 percent) level of trust in scientists (as assessed by a composite of five survey questions), while 84 percent of people globally said that they have “a lot” (41 percent) or “some” (43 percent) trust in doctors and nurses. At the individual level, the most influential predictor of trust in scientists was studying science in school; at the country level, people in countries with higher levels of inequality were less likely to trust scientists. Doctors and nurses are generally trusted globally, especially in high-income areas such as western Europe, Australia, New Zealand, and northern Europe.

Globally, 61 percent of people—73 percent if one excludes people in the atypically irreligious China—said that religion is important in their daily lives. Asked whether science has ever disagreed with the teachings of their religion, only 29 percent of people globally answered in the affirmative. Of these, more than half —55 percent globally and 60 percent in the United States—said that they would side with their religion in the event of such a disagreement, while 29 percent globally and 32 percent in the United States said they would side with science. Men and older people were generally more likely than women and younger people to take the side of science, although there was considerable regional variation. 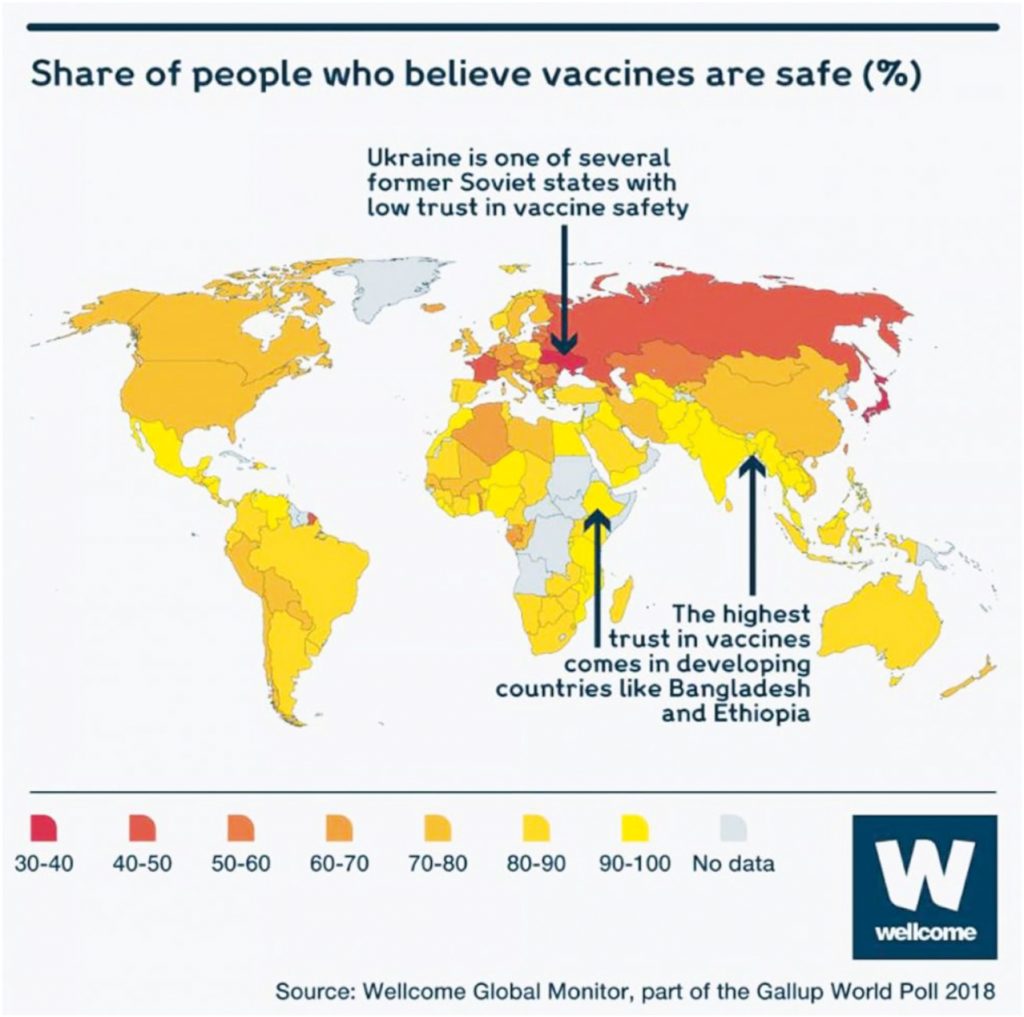 With a questionnaire that occupied (in its English-language version) eleven pages, a detailed report (available online at https://wellcome.ac.uk/sites/default/files/wellcome-global-monitor-2018.pdf) that runs 132 pages, and over six megabytes of raw data from the survey archived at the UK Data Service, it’s clear that Wellcome Global Monitor 2018 was a comprehensive effort. As Wellcome’s director writes in his foreword to the report, the study’s findings “can inform the development of policies to increase trust and engagement between scientists and society”—which are surely going to be conducive to the aim of increasing understanding, acceptance, and appreciation of science.

For more perspective, see Matthew Nisbet’s column in this issue.