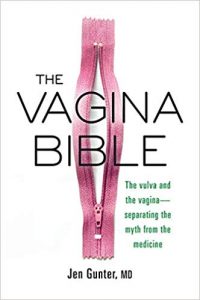 Considering that half the population has one, the vagina has been plagued by an inordinate amount of myth and misinformation. There are many reasons. Prudery inhibits public discussion of anything having to do with sex, women are embarrassed to talk about their private parts, patriarchal attitudes still prevail, religions have taught that women are inferior, most doctors have traditionally been men, and the vagina has been thought of as unclean. Dr. Jen Gunter has done women everywhere a great service by writing The Vagina Bible: The Vulva and the Vagina—Separating the Myth from the Medicine to set the record straight. Her declared “vagenda” is “for every woman to be empowered with accurate information about the vagina and vulva.” She is the perfect person to write such a book. She has a wealth of clinical experience, with thirty-three years in medicine and twenty-four years practicing gynecology. She is a gifted communicator with a long and successful career writing about medical matters. She is frank, unashamed, and generous about sharing details of her personal experiences, such as the time she embarrassed herself by putting a condom on a man inside out. And her sense of humor shines through.

I am not a gynecologist, but gynecology was a big part of my practice as a family physician; I couldn’t begin to guess how many vaginas I’ve peered into and palpated. I thought I knew about vaginas, but reading this book taught me much that I didn’t know. I discovered that a lot of what I thought I knew was wrong. I learned a lot, and I’m sure the average woman would learn even more. The book is not only educational but also entertaining, fun, and conveniently organized into easy-to-read short chapters. Each chapter ends with a “Bottom Line” summary of the important points. As an additional bonus, the book provides an education in science, critical thinking, and evaluating medical claims.

In ten sections and forty-seven chapters, The Vagina Bible covers cleansing, menstrual products, douching, lubrication, menopause, sexually transmitted infections, pubic lice, yeast, probiotics, toxic shock syndrome, and much more. It covers everything women want to know plus everything they didn’t know they needed to know about their vaginas.

Here’s a sample of some of the book’s intriguing facts:

Dr. Gunter asks, “Why do we have a hymen?” and offers some possible answers. She gives valuable instructions to help a young girl insert a tampon for the first time. She says myths abound, but “Fortunately I have the antidote. Facts.” She is a breath of fresh air.

There is a whole chapter on how to find valid information on the internet, how to identify reliable websites, and how to detect bias. Avoid websites that sell products or offer advice from celebrities. Watch for made-up concepts such as detox. Avoid any website that mentions homeopathy as a valid treatment. Don’t rely on testimonials. There is a chapter on old wives’ tales, debunking myths about apple cider vinegar, coffee enemas, drinking eight glasses of water a day, essential oils, alkaline water, kava, garlic, widespread yeast, vaginal tightening sticks, tea tree oil, and much more.

She says a full discussion of hormone replacement is beyond the scope of this book and says perhaps her next book should be The Menopause Bible. I hope she will go on to write that and maybe The Pregnancy Bible and other OB/Gyn related books.

The book concludes with “The patriarchy and snake oil have had a good run, but I’m done with how they negatively affect and weaponize women’s health. So I am not going to stop swinging my bat until everyone has the tools to be an empowered patient and those who seek to subjugate women by keeping them from facts about their bodies have shut up and taken a seat in the back of class. That’s my vagenda.” It is a worthy goal indeed.

This book is an owner’s manual for the vagina that also offers an education in skeptical thinking about medical matters. I wish every girl and woman everywhere had a copy of this book. I can’t thank you enough, Jen, for creating this invaluable reference. I feel smarter now, thanks to you.