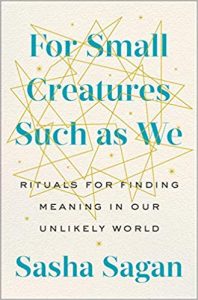 For Small Creatures Such as We: Finding Wonder and Meaning in Our Unlikely World.

Sasha Sagan has written a book for turbulent times. It’s for believers, those of us who are nonbelievers, and for those in-between. Its evocative title, For Small Creatures Such as We, came from her parents’ only work of fiction, the novel Contact. Sasha Sagan’s parents, Carl Sagan and Ann Druyan, gave her a childhood rich in both science and meaning. And her parents were true collaborators. In fact, Sagan notes that although her title phrase (the rest of it reads, “the vastness is bearable only through love”) gets attributed to Carl, “It’s my mom who actually came up with those words, which have served as a perfect crystallization of our family’s philosophy.”

The details of each of her parents’ historic religious backgrounds as Orthodox Jews and how they came to secular, evidence-based beliefs is a wonderful read. Carl told his devout father, Harry, that he no longer believed, and Harry responded: “The only sin would be to pretend.” Yet Sagan relates that being Jewish is so much more than just religion; it is history and culture intertwined. Modern DNA tests can reveal that she is Ashkenazi Jew, for example, but no such test reveals you to be Presbyterian.

Sagan’s own process of learning to think critically came at her parents’ knees when she was urged to believe that which was true, and true not because one wished it to be so but because of evidence. And as she grew older, the evidence litmus test was the scientific method.

“They taught me that science wasn’t just a set of facts to be compared and contrasted with other philosophies, but a way of testing ideas to see which ones stand up to scrutiny,” she writes.

Growing up in our home there was no conflict between science and spirituality. My parents taught me that nature as revealed by science was a source of great, stirring pleasure. Logic, evidence, and proof did not detract from the feeling that something was transcendent—quite the opposite … . My parents taught me that the provable, tangible, verifiable things were sacred … .

The essence of her book surrounds the need for rituals and celebrations that put us into community to celebrate life. (And science itself, she writes, “is the source of so much insight worthy of ecstatic celebration.”) She is emphatic that life itself is a true miracle, considering all the opportunities not to meet, not to fall in love. Sagan makes us stop and think that life has existed for millions of years before us and will be here, it is to be hoped, for millions of years after us. We have, if we are very lucky, a blink of eighty to a hundred years to live.

So how are we going to do just that? She gives marvelous examples from many global communities from the Hopi in the Southwest to the Maasai of Africa of rituals and celebrations. Yet, Sagan notes, most ceremonies on earth come from either biology or astronomy: life passages such as birth and death, planting or harvest times, religious ceremonies based on the position of heavenly bodies.

Even the universal celebration of spring begins with a discussion of the science of the tilted earth, the disaster that tipped us and created the rituals, worldwide, to welcome the spring equinox. Sagan writes of a created ritual her mother made for her, “Blossom Day,” to examine closely, as winter faded, the dogwood tree outside their dining room window, watching for the first bud and, then, an indisputable blossom. A tea party ensued, gifts were exchanged, but to Sagan, the biggest gift was that celebrations can be created.

Perhaps the best parts of the book are Sagan’s descriptions of life with her famous parents, and then Carl Sagan’s death in 1996, when Sagan was just fourteen. A ritual at bedtime when Sagan was small was to tell her parents, “Don’t forget—don’t die.” Her mother would promise; her father would say, “I’ll do my best.” And as Carl was dying he said to his daughter, “I’m sorry,” which she didn’t understand at the time, but came to realize Carl knew that her and her brother’s lives would be forever shaped by his untimely, and out of the natural sequence, death. Sagan chose not to read her father’s books until she listened to them as audiobooks, and she says it was as though he was speaking just to her.

Sagan gives universal examples of the rituals of all our lives: the seasons, anniversaries and birthdays, weddings, coming of age (and menstruation), sex, and funerals. By doing so she emphasizes our need as Homo sapiens to connect, to celebrate, and to make sense of rites of passage.

There is a moving story of taking her small daughter to visit Carl’s burial place in Ithaca. Sagan uses the Jewish tradition of placing a small stone on his grave and is comforted by all the “notes, marbles, Legos, mini planets, and other space-related objects. Seeing this makes me happy. My grief is soothed by knowing other people miss him, remember him, and love him still now.” And she writes, “Of all the turning points in life, death begs most for ritual. Many of these are elaborate, but the simplest ones sometimes carry the most weight.”

A life without connections for us humans would ring rather hollow. Sasha Sagan’s book gives both import to, and lessons for, connecting. Because of her excellent global examples, the world feels a bit smaller, a better place to be. Whether or not you know or like Carl Sagan or watched the first Cosmos series that he and his wife Ann created or the second one (2014) that Druyan produced after his death (a second season is forthcoming), this book has messages that resonate. And if you would go tomorrow to put a rock on Carl’s grave to connect with others who miss him, this book will delight.

Ruth Frazier is a former nonprofit executive who is active in the International Women’s Forum. She has long been associated with the Committee for Skeptical Inquiry and the Center for Inquiry.