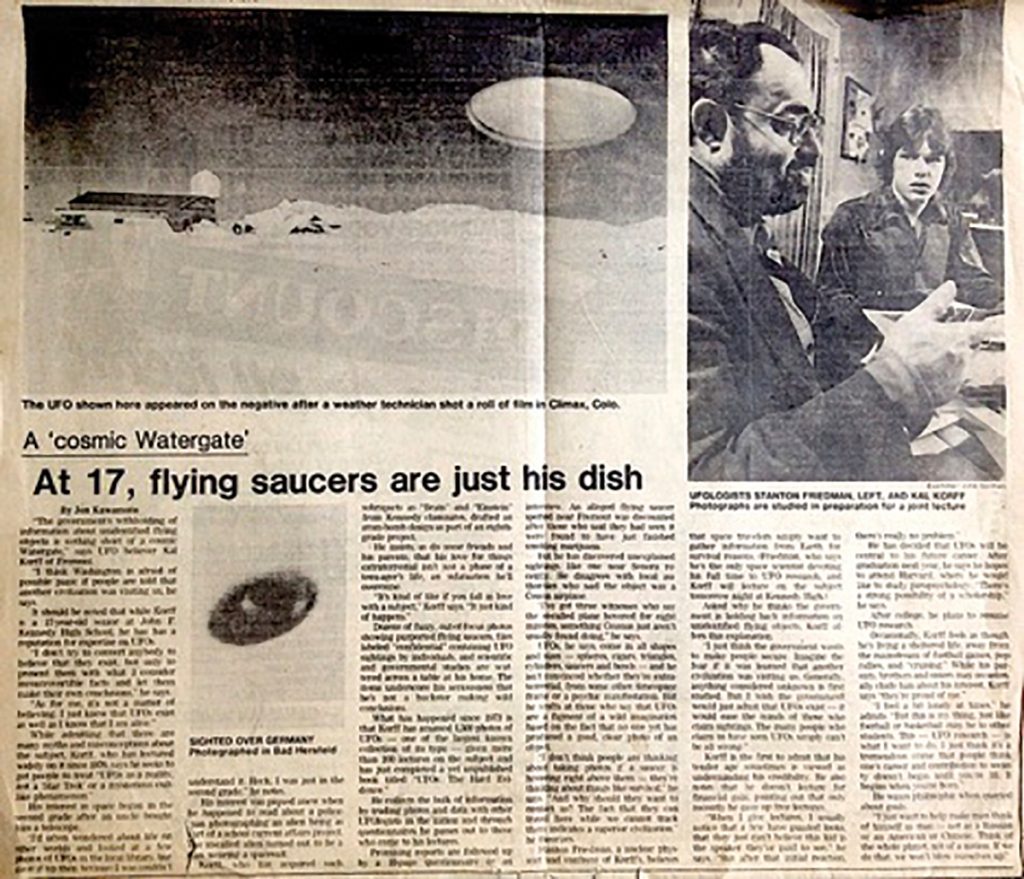 I first started studying UFO reports on October 17, 1973. By the time I was thirteen years old, I had met and become friends with famed UFO researcher Stanton T. Friedman, who recently passed away at age eighty-four (see Joe Nickell’s piece in the September/October 2019 SI). Friedman had taken me under his wing and was a former mentor of mine. To say he was a great influence on me when I was young is an understatement. Until disagreements over various UFO cases came between us, we still “agreed to disagree”—we remained civil and friends.

Though I started out as a hardcore “UFO believer” when I was a teenager, ironically it was in working closely with Friedman that I saw through his schtick, eventually learning to embrace a truly skeptical approach to investigating UFO reports. I have championed this approach ever since.

One of the biggest revelations I had in understanding the true nature of Stanton Friedman and his biases was in seeing how he deliberately twisted the meaning of very important words to further what really was his own propaganda. The word debunker was perhaps his favorite. To Friedman, UFO skeptics such as the late Philip J. Klass, James Oberg, and especially Robert Sheaffer—“Little Bobby Sheaffer” as he used to say to me—are all guilty of committing the crime of using facts to back up their claims. As Friedman said, “Don’t confuse me with facts; my mind is already made up.” To Friedman, the word debunker means someone whose mind is closed, a person with an obvious agenda. In the real world, the true definition of debunker is someone who separates “bunk” or falsehoods from facts. Debunking is not only good for the UFO field, it must be embraced. There’s something very wrong with “researchers” who think that separating fact from fiction is ever a bad thing.

Speaking from firsthand experience again, I know that Stanton Friedman always knew the real truth about Betty Hill’s “alien star map.” Based on the admirable work of amateur astronomer Marjorie Fish, the map supposedly identified the stars Zeta Reticuli 1 and 2 as being the “home base” where the aliens who supposedly abducted Betty and Barney Hill had come from. Unfortunately, to this day “The Reticulans” are just as much a part of modern day American cultural mythology as are Roswell and MJ-12, thanks to Friedman!

It was over the Hill case and Friedman’s refusal to face the facts that caused me to largely break ranks with him. In 1976, Robert Sheaffer wrote an article published in Official UFO Magazine. In this devastating exposé, Sheaffer correctly argued that another “star map” had been found that was a better fit than Marjorie Fish’s work, a map made by astronomer Charles Atterberg. When confronted with Sheaffer’s exposé, Friedman immediately gave me his song and dance routine that Sheaffer was a “debunker,” that “all debunkers operate the same way: research by proclamation. Don’t confuse me with facts; my mind is made up.”
What once distinguished the Hill case from all other claimed abductions was the supposed credibility of Fish’s star map. If more than one candidate group of stars seemed to fit, then this “alien star map” was worthless, essentially a Rorschach blot. Atterberg’s work was superior to Fish’s. He used more recent and accurate astronomical data not available to Fish when she did her study. Indeed, when the Hipparcos satellite was launched in 1989, its measurements further destroyed the Fish star map interpretation. You would never know this from talking to Friedman.

After Sheaffer’s exposé was published, Friedman refused to take the initiative to determine whether Fish’s or Atterberg’s claims were right. Instead, he resorted to doing what he slammed the debunkers for engaging in: “research by proclamation.” Friedman was simply proclaiming that Sheaffer was wrong, but he refused to try to prove it.

Refusing to do the same, I spearheaded this investigation, corresponded for over one year with Atterberg, throwing everything Friedman could think of back at him, plus my own points, with me being the middleman in all of this. After a year of correspondence, I finally had to admit that Atterberg was right; Friedman was not only wrong, he was being dishonest! I handed Friedman my now thick file of letters with Atterberg, and he looked at the file for about forty seconds. He flipped through a few pages in his basement office in Union City, then handed the folder back to me and said, “I don’t know. I’m not an astronomer!”

Oh, I get it, Stan. Suddenly you are “not an astronomer,” but you’re just a “good enough astronomer” to promote the myth of the Fish star map for years, even though the idea has now been discredited. That was it for me. If I wanted to really understand the truth about UFO cases any further, it was not going to happen by working closely with Stanton Friedman.

There was another event I experienced, the details of which I have never revealed in writing before. When I invited Friedman to lecture with me in high school—thanks to Friedman I also started lecturing when I was only thirteen—I arranged a press conference and individual face time with all the major reporters so that he and I could speak to them.

Because of time overlaps, two reporters were present: one from the San Francisco Examiner and the other from the Oakland Tribune. As the Tribune reporter correctly reported in his article, I was shocked at some of the things that Friedman started saying. Not only did this journalist capture Friedman’s words accurately, the Examiner photographer’s photo taken during this time shows the exact moment my mouth is open aghast in response to what I am hearing Friedman say. Friedman was sharing beliefs that exposed his true lack of objectivity and his penchant for doing “research” by proclamation. Here’s what he said that stunned everyone in that room—me included.

In a damning article titled “Apostle of UFOs Says the Day Is at Hand,” Friedman boasted with “certainty” that official “contact” with aliens would happen within “20 years.” This was in 1979; you do the math.
“Do you really think so?” asked the startled Korff, as the article noted.

“Absolutely,” said Friedman. “The space shuttle will be flying regularly by then, and this will bring down the UFOs.”

Friedman “retired” from UFOlogy just months before his death, saying “It was time.” Unfortunately, he is either largely or wholly responsible for spreading several of the most enduring and dangerous myths about UFOs, which have harmed society and destroyed basic trust in the government, its military, and other institutions such as NASA. This includes the myths of Roswell, the MJ-12 hoax, “Zeta Reticulans,” the Hill “alien star map,” and so forth ad nauseam. These facts about Stanton Friedman are beyond dispute and can easily be verified by anyone who thinks critically.

Kal K. Korff is President and CEO of TotalResearch, a company dedicated to studying universal mysteries and concerns. He has appeared on such TV shows as CNN’s Larry King Live and Fox’s Encounters. He is the author of Spaceships of the Pleiades: The Billy Meier Story (1996) and The Roswell UFO Crash: What They Don't Want You to Know (1997), both from Prometheus Books. He is a former senior systems analyst at Lawrence Livermore National Laboratory on the “Star Wars” program and is a recognized expert and pioneer in computer-based multimedia systems who helped develop Apple Computer’s revolutionary HyperCard software — the ancestor to the Internet software Browser. He can be reached at 16625 Redmond Way #254, Redmond, WA 98052.


I first started studying UFO reports on October 17, 1973. By the time I was thirteen years old, I had met and become friends with famed UFO researcher Stanton T. Friedman, who recently passed away at age eighty-four (see Joe Nickell’s piece in the September/October 2019 SI). Friedman had taken me under his wing and …