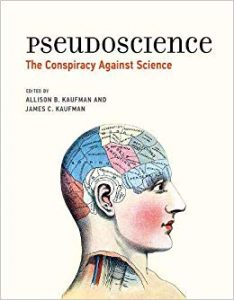 The new book Pseudoscience: The Conspiracy against Science includes twenty-two essays organized in six sections touching upon, respectively, the basics of pseudoscience, the costs of pseudoscience for society, scientific soundness, pseudoscience in the mainstream, and science activism. The sixth section consists of a single chapter by Paul Joseph Barnett and James C. Kaufman. For reasons of space, I can briefly mention only a few of the most remarkable contributions.

In the chapter titled “Food-o-science Pseudoscience: The Weapons and Tactics in the War on Crop Biotechnology,” Kevin M. Folta discusses in detail the fallacies of those who absurdly malign genetic engineering in a world in which no fruit or vegetable can be consistently called “natural.”

In “An Inside Look at Naturopathic Medicine: A Whistleblower’s Deconstruction of Its Core Principles,” Britt Marie Hermes shares her experience as a “licensed naturopath.” Naturopaths believe that a “force” called vis can restore health if activated through “natural remedies.” They use antiquated/discredited methods yet strive for inclusion in the field of scientific medicine. Hermes dissects the “beautifully packaged nonsense” that she herself used and describes the moral dilemmas she faced when confronted with conditions beyond her competence that threatened the patient’s life.

In “Scientific Failure as a Public Good; Illustrating the Process of Science and Its Contrast with Pseudoscience,” Chad Orzel discusses two cases of failure on behalf of major scientific institutions: the 2011 announcement that neutrinos seemingly moved faster than light and the 2014 claim that evidence had been found of primordial space-time ripples predicted by inflationary cosmology. In the first case, the experiment was influenced by a malfunction; in the second case, the effect of foreground dust on the signal had been underestimated. Orzel emphasizes that the debate over such cases was conducted over professional channels and that the process resulted in self-correction. Although these are not success stories, they can still be taken as illustrating “science at its best” (254).

In “Scientific Soundness and the Problem of Predatory Journals,” Jeffrey Beall examines the proliferation of pseudo-journals that, trying to generate as much revenue as possible, never turn down articles and also meet the needs of sloppy and ambitious “researchers” who want to easily inflate their publication lists. His pessimistic conclusion is that because such factors and practices are so ingrained and widespread, junk science and science proper have started to mingle.

In “‘Integrative’ Medicine: Integrating Quackery with Science-Based Medicine,” David H. Gorski scrutinizes the spread of complementary and alternative medicine (CAM) and the infiltration of pseudoscience in academic medicine, or “quackademic medicine.” At least two U.S. government entities fund such enterprises: the National Center for Complementary and Integrative Health and the Office of Cancer Complementary and Alternative Medicine (OCCAM, “the most inappropriate acronym ever,” points out Gorski, 314). Supporting CAM, observes Gorski, discredits the rigorous application of scientific trials and subjects patients to interventions without probability of a positive result.

In “‘HIV Does Not Cause AIDS’: A Journey into AIDS Denialism,” Seth C. Kalichman examines AIDS deniers’ tactics, such as cherry picking genuine scientific papers or moving the goalposts (i.e., demanding a piece of evidence and then claiming that it is not enough), and follows individual stories, including one of a denialist who ignored her own HIV diagnosis until she died of the untreated infection; meanwhile, she had transmitted it to her daughter, who died of AIDS-related pneumonia (a death that the woman wrongly attributed to antibiotics).

In the final chapter, Barnett and Kaufman remark that pseudoscientific beliefs have been flourishing because of the idea that “everybody has the right not to be offended” (467). Change, they suggest, is possible, yet “directly challenging followers of pseudoscience is not simply ineffective. It focuses on the symptoms instead of the disease” (475). One should promote scientific literacy and critical thinking. In their opinion, giving up on the battle against the “hydra” of pseudoscience is not an option; it is possible to keep engaging against pseudoscience in a nonconfrontational way even in everyday life, when one for instance faces coworkers who support homeopathy.

Kaufman and Kaufman’s collection tackles pseudoscience from multiple angles, including the viewpoint of whistleblowers and insiders but also experts in cognitive sciences and educators. It is an invaluable toolbox for all those who are interested in understanding pseudoscience and in addressing it critically in the classroom as well as in informal conversation. The collection makes it clear how pseudoscience and antiscience are not just adversaries in a “battle of words” of sorts but constitute a threat to health. No contribution slips into a naive overpraise of science. The advocates of pseudoscience are never “otherized” but understood in depth without adopting a patronizing attitude.

My only critical remark is that the collection almost exclusively focuses on American/Western culture: a broader, intercultural perspective may have been instrumental in revealing how pseudoscience, despite appearing in cultural or religion-specific garb, invariably displays the same fallacies: consider creationism, widespread both in Christian and Islamic garb, or “cupping,” a form of bloodletting that is claimed to be traditionally Muslim by Muslims or Chinese by Chinese people. I am convinced that the exposure of how cultural specificity is an illusion can deprive pseudoscience of much of its appeal.

Stefano Bigliardi has served as a researcher and a lecturer at the Center for Middle Eastern Studies at Lund University (Sweden). He currently teaches philosophy at Monterrey Tech, Campus Santa Fe (Mexico City). He is the author of Islam and the Quest for Modern Science (Swedish Institute in Istanbul, 2014).