To reconcile inconvenient scientific findings, the creationists’ god had to make sedimentary rock layers nice and smooth and had to tamper with atoms to nullify the results of radiocarbon dating. 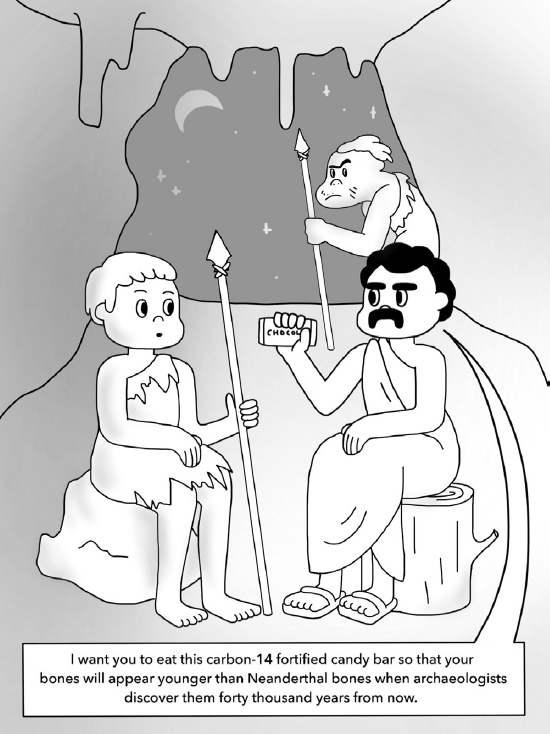 This is the third of an occasional series of articles on the Creationist Funhouse.

God was very busy during Genesis 1, warping light around to create the Red Shift and during Genesis 3, recreating the whole natural world to curse it. But he really got busy in Genesis 6, during The Flood.

You see, if you thought you could learn about the creation of the earth by studying the rocks, you would be very, very wrong. Genesis 1 tells you nothing about where the rocks came from. To understand that, according to creationists, you must read Genesis 6–8, the story of Noah’s Flood. During this time, they say, water covered the entire land surface of the earth for a little over a year. And this water movement would have been so violent, sloshing around in gigantic waves, that it would have torn up all the land masses and produced great mounds of sediment that entombed plants, animals, and people and turned them into fossils. Therefore, according to creationists, the layers of sedimentary rock in the crust of the earth are a record not of what happened in creation but of what happened during the Flood.

The first thing that God had to do to make the young sedimentary rocks appear old was to make the layers of sediments nice and smooth. Sometimes the layers of sediments, which today form rocks such as limestone, shale, and sandstone, form perfectly flat layers for many miles. One look at the Grand Canyon and you can see just how extensive the perfectly flat layers of sediments can be. The Grand Canyon rock layers are quite typical of almost any place in the world you might find sedimentary rocks. Such smooth, flat layers of sediments can form in tranquil, shallow seas; in fact, they are forming this very moment in shallow seas all around the world. But what if there is a gargantuan flood going on all around? God had to make sure the resulting sediments were smooth and flat for hundreds (and sometimes thousands) of successive layers over large areas. The Bible, of course, makes no mention of this. It is the product of creationist fantasy.

But God’s job was not this simple. He also had to make sure that between many of the sedimentary layers there were layers of lava or volcanic ash. That is, he had to hold back the Flood waters from dumping sediments on a sometimes large area, and then call forth a volcanic explosion to pour layers of lava over the fresh sediments or dust them with ash before allowing the Flood waters to resume dumping their sediments. Some volcanic deposits were made underwater—they have a characteristic pillow shape—but most of them formed on the continents. All over the world today, we can see sedimentary rock layers with fossils in them sandwiched between rock layers consisting of volcanic minerals without fossils in them. The Bible makes no mention of God creating volcanic explosions either.

But perhaps more than anything else, God was very busy during the Flood playing with subatomic particles.

Scientists use radiometric dating to determine the age of certain components of rocks, meaning they use radioactivity as a metric of age. Radioactivity was one of the great discoveries at the turn of the twentieth century. Some large kinds of atoms decompose or fall apart. They eject subatomic particles and turn into different and smaller kinds of atoms in the process. Uranium atoms, for example, undergo radioactive decay to become lead atoms. As a matter of fact, different kinds of uranium atoms decompose into different kinds of lead. You may refer to my Encyclopedia of Evolution, or any number of online websites, for more information.

This radioactive decay is not a random process. Instead it follows the law of half-lives. Over a certain period of time, half of the atoms will decompose. Each kind of radioactive atom has its own half-life. For uranium atoms, a half-life is millions of years. For radioactive carbon, the half-life is 5,730 years. This means that you will never have a time when all the atoms will decompose. After ten half-lives, only one-1,024th of the radioactive atoms remain, but this is still a lot of atoms. For any given atom, you cannot know when it will decompose. The reason that the atoms collectively follow this pattern so strictly takes us right into the realm of quantum mechanics, a realm where only physicists do not fear to tread.

What happens next seems to be simple. To figure out how old a rock is, just measure the amount of uranium and the amount of lead and calculate how long it would take for uranium to have formed that amount of lead. But as any creationist can tell you—correctly, for once—this is not a valid procedure. What if there were already some lead in the rock before the uranium began decomposing? This would make a young rock appear to be old. Indeed, this would be an invalid procedure—so obviously invalid that, in fact, no geologist uses it. Instead, geologists measure the relative amounts of uranium and lead inside of zircon crystals.

Within certain volcanic rocks, zircon crystals form. Within the crystal as it forms, zirconium and uranium atoms (which have a similar external structure) line up. But you do not find very many lead atoms within the crystal, because they do not fit. Therefore, if a scientist finds a zircon crystal in a volcanic rock, he or she can reasonably assume that almost all the lead atoms in the crystal (though not the rest of the rock) came from the radioactive decay of uranium atoms. Zircon crystals formed in volcanic rock under extremely high temperatures, which have been rare on the earth since about 4.5 billion years ago, back when the crust of the earth was still molten. Therefore, most zircons have a lead-to-uranium ratio consistent with that age.

Because newly formed zircon crystals contained little or no lead and creationists believe all zircon crystals are newly formed, one must wonder why any zircon crystals contain any lead at all. How did the lead get there? Creationist websites claim that the lead comes from contamination—the lead atoms diffused into the crystal after it was formed. If in fact the relative amounts of lead and uranium have nothing to do with the passage of billions of years of time, then you would expect random amounts of the two. But this is not what you find. Zircon crystals from geological deposits all over the world appear to be about 4.5 billion years old. Therefore, almost the same amount of contamination must have occurred in all geological deposits all over the world if the creationists are right. And such contamination would have taken a long time to occur, longer than they believe the earth has existed. Perhaps God had to personally supervise the diffusion of lead into the crystals as they formed on a young earth, something not mentioned in the Bible.

God also apparently played around with radiocarbon atoms. Carbon-14 is a rare form of carbon atom that is unstable. The carbon dioxide in Earth’s atmosphere contains a small amount of carbon-14, which plants absorb along with regular carbon in photosynthesis. Any organic material, such as a piece of wood, contains a small amount of carbon-14. Because the half-life of carbon-14 is 5,730 years, the amount of carbon-14 decreases more quickly than uranium. Radiocarbon never all disappears, but after about fifty thousand years, so little of it remains that chemists cannot measure it. Note also that radiocarbon analysis cannot be performed on fossils, in which the original wood and bone molecules have been replaced by minerals and nearly all the original carbon atoms, whether regular or 14, have been lost.

Just as with the zircon dates, the radiocarbon dates are not random. God would have needed to take every organic archaeological specimen and tamper with it. To see an example, come with me in your imagination to the world of cavemen. The Neanderthal cavemen lived in Europe until about 30,000 years ago. Their bone remnants contain small amounts of radiocarbon that are consistent with that age. The Cro-Magnon cavemen, however, lived in Europe more recently, until about 10,000 years ago. Their bone remnants contain, on the average, larger amounts of radiocarbon. These results are not random. No Neanderthal bones younger than about 30,000 years have been found. However, to a creationist, the universe itself did not yet exist even 10,000 years ago. And the caves in which the cavemen lived—whether Neanderthal or Cro-Magnon—are limestone caves, formed of materials that creationists believe were deposited during the Flood just four thousand years ago. Therefore, creationists have to believe that all radiocarbon dates, except very recent ones, are invalid. Why, then, do these dates show a pattern, in which the more primitive specimens have older radiocarbon ages than the more recent specimens? God had to have tampered with them.

Scientists have only known about radioactivity for a little over a century. Radiometric dating was only recently developed. Anyone living before the twentieth century could not have known anything about God’s detailed, worldwide, splendid manipulation of radioactive atoms. As with the Red Shift, God did some of his best work for us, today, to see, rather than for anyone else who lived before us.

But apparently playing around with radioactivity was easy work for God because, as we shall see in the next article in the series, he had time to do some even more creative things with the rock layers.

Stanley Rice is professor of biological sciences at Southeastern Oklahoma State University and author of Life of Earth and, most recently, of Scientifically Thinking (Prometheus Books, 2018).


To reconcile inconvenient scientific findings, the creationists’ god had to make sedimentary rock layers nice and smooth and had to tamper with atoms to nullify the results of radiocarbon dating.   This is the third of an occasional series of articles on the Creationist Funhouse. In the first episode of this series (May/June 2019), I …