Q: It’s said that the best way to keep people down is to limit their access to education and knowledge, making it easier to control them. That seems to be what the government does. What do you think?

A: I was asked this question in mid-2019, accompanied by the news headline “Trump Administration Proposes $7.1 Billion Funding Cut to Education Department.” The claim, like most conspiracy theories, has a superficial populist appeal, and I’ve seen the sentiment echoed by many otherwise skeptical friends and acquaintances.

An unedited sampling of Reddit posters on the topic provides some typical opinions:

Many conspiracy theorists—from David “Obama Is a Secret Lizard Illuminati” Icke to Alex “Everything Is a False Flag” Jones—have eagerly adopted this idea. It’s not surprising, because complaints about suppression of information (and secret knowledge available only to the powerful elite) are key to their worldview. Note that the claim is not merely about misinformation (a staple of conspiracy theories) but the active suppression of otherwise ordinary general knowledge and information.

A History of Anti-Education Complaints

The idea has a long history. In his influential 1869 book On Liberty, John Stuart Mill wrote:

A general State education is a mere contrivance for moulding people to be exactly like one another: and as the mould in which it casts them is that which pleases the predominant power in the government, whether this be a monarch, a priesthood, an aristocracy, or the majority of the existing generation, in proportion as it is efficient and successful, it establishes a despotism over the mind, leading by natural tendency to one over the body.

Another early proponent was professional curmudgeon H.L. Mencken, who wrote in the April 1924 issue of his magazine The American Mercury:

The aim of public education is not to spread enlightenment at all; it is simply to reduce as many individuals as possible to the same safe level, to breed and train a standardized citizenry, to put down dissent and originality. That is its aim in the United States, whatever the pretensions of politicians, pedagogues and other such mountebanks, and that is its aim everywhere else.

For later generations, the Pink Floyd song “Another Brick in the Wall (Part 2)” from the album and film The Wall is perhaps a clearer touchstone, tapping into universal student grousing about conformity and mandatory public education. 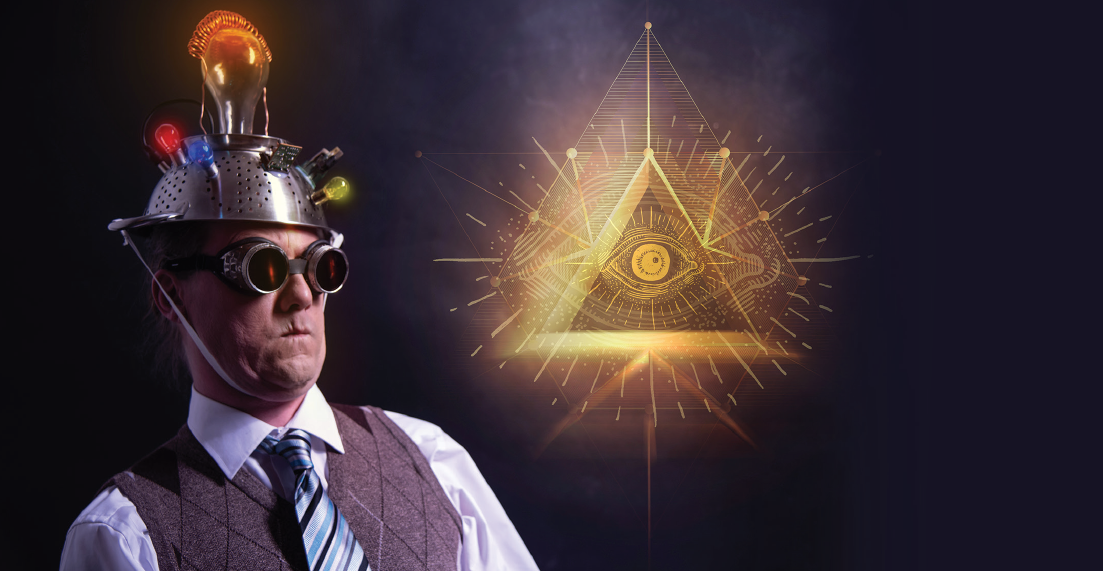 Complaints about the educational system (or public transportation, crumbling infrastructure, or any other social service) are both timeless and beyond the scope of this column. But it’s fair to point out that much has changed in the American educational system since the days of Mill and Mencken (more on that presently). Nevertheless the idea holds a strong sway over many people today.

Like UFO cover-ups (see “The Phantom Menace of UFO Revelation,” my July/August 2018 SI column), this conspiracy allegedly spans administrations and generations. Democrat and Republican alike are allegedly participants in this institutional conspiracy. (The effects of Trump’s education cuts that spurred this query would not be seen in general education levels for years—if at all—and thus any “benefit” to keeping the public ignorant would of course boost the goals of future Democratic presidents and administrations as well. If true, it’s heartening to see this common ground and shared agenda between otherwise deeply polarized political parties.)

On social media, I’ve seen this claim shared unironically by many highly educated people, often with a whiff of condescension. Those advocating conspiracies of course exclude themselves as victims of it. They’re “in the know” and have managed to break free of the blinders. It’s the Others—the ignorant masses of sheeple—who need to wake up and realize how they’ve been so woefully duped and kept ignorant by the government in service of controlling them.

Falsifying conspiracy theories is a difficult task, but we can look at different lines of evidence for this one. This conspiracy ignores the fact that education and information—the very things that the government is supposedly working to contain and minimize—have never before in human history been so freely available. There are over 115,000 libraries across the United States that have books and current publications on every imaginable topic that are free to read by anyone at any time. Virtually everyone has some access to the internet, a portal to virtually unlimited information via Wikipedia, tutorials on YouTube—and the Khan Academy, a free multilingual online program offering courses on myriad topics—news articles, blogs, and the like. (Some information is of course behind newspaper and journal paywalls, but that’s a function of for-profit publication and has nothing to do with government attempts to suppress knowledge.)

Americans are better educated than at any other time in history. In July 2018, the U.S. Census Bureau revealed that 90 percent of Americans twenty-five and older completed at least high school—an all-time high and a remarkable increase from 24 percent in 1940. Education has risen dramatically in the population as a whole, across genders, races, and economic statuses (Schmidt 2018). The Census Bureau also found that the number of people aged twenty-five and over whose highest degree was a master’s has doubled since 2000 to 21 million. During that time, the number of people earning doctorate degrees more than doubled to 4.5 million. In 1940, 3.8 percent of women and 5.5 percent of men had completed four years or more of college; by 2018, it was 35.3 percent for women and 34.6 percent for men.

The United States spends $706 billion on education, according to the U.S. Department of Education (2019), which comes to about $13,850 per public school student. Not only does the government provide free, mandatory grade school education,1 but it also offers low-interest student loans for those who wish to pursue higher education. All this is puzzling behavior for a government that wants to keep its citizens ignorant—but perhaps someone didn’t get the memo.

The shadowy sheeple factory workers are obviously losing the battle to keep citizens ignorant. The data—assuming you don’t think they’ve been faked—are quite clear. And where, exactly, is the “puppet-like” dumbed-down populace that believes anything the government and media say? The idea that Americans—after decades of their education being systemically suppressed by the government—have become easily swayed and docile is absurd. Americans are hardly in lockstep agreement with what its leaders and officials want; this is especially clear from the widespread and well-attended protest marches across the country in recent years. From the Women’s Marches to Occupy Wall Street, from protesting for climate change and education policies to gun control and police brutality, Americans show no sign of being too uneducated about what’s going on to embarrass and cause trouble for those in power.

Regardless of status as progressive, conservative, or something else, everyone can unite to complain about the stupidity of their fellow citizens and blame the “gubmint” for trying to keep citizens uninformed. Many people endorse the spirit or gist of conspiracy theories while not necessarily believing in their literal truth. This is especially true of socially and politically charged issues. Sharing on social media is less about the content of that specific story or meme than it is about symbolic endorsement, or what’s been called virtue signaling. Liking or sharing a news story doesn’t necessarily mean you’ve read it—much less understand it or can intelligently discuss it—but instead it’s often used as a visual badge representing your social views and grievances.

If there really are federal government employees in charge of keeping Americans ignorant—maybe a “black operation” with a name like “Department of Anti-Education” located in some nondescript hallway in the Pentagon—they must surely be disappointed in their demonstrable and utter incompetence.


Q: It’s said that the best way to keep people down is to limit their access to education and knowledge, making it easier to control them. That seems to be what the government does. What do you think? —C. Griffin A: I was asked this question in mid-2019, accompanied by the news headline “Trump Administration …