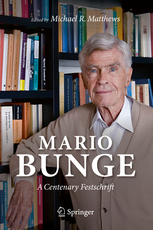 Philosopher of science Mario Bunge has been honored with the publication of Mario Bunge: A Centenary Festschrift, an 827-page volume with forty-one chapters by scholars from sixteen countries written to honor him on his 100th birthday (September 14, 2019). Bunge is a longtime fellow of the Committee for Skeptical Inquiry and has written several key articles on science and pseudoscience for Skeptical Inquirer.

Born in Buenos Aires and trained as a physicist with a doctorate in mathematical physics, Bunge eventually emigrated first to Europe and then to Montreal, Canada, where in 1966 he joined the philosophy department at McGill University, with which he has been affiliated ever since. Bunge was the Frothingham Professor of Logic and Metaphysics at McGill until his retirement in 2011 and is now professor emeritus of philosophy.

He is the author of more than eighty books and some 540 articles, many of them devoted to his task of achieving a synthesis of rationalism and empiricism. Such works as Foundations of Physics (1967), Philosophy of Science (1998, two volumes), and his massive eight-volume Treatise on Basic Philosophy (1974–1989) defended conceptions of materialism and humanism.

The contributions in the new book in his honor, published by Springer International, aim to show the value of Bunge’s science-informed philosophy and his systematic approach to philosophical problems. The chapters explore what Editor Michael R. Matthews of the University of New South Wales, Sydney, calls “the exceptionally wide spectrum of Bunge’s contributions.” They deal with the philosophy of science, of mathematics, of psychology, of physics, of social sciences, of biology, and of medicine as well as with metaphysics and the methodology and philosophy of science broadly.

In his scholarship, Matthews writes, Bunge’s unifying thread is “the constant and vigorous advancement” of Enlightenment thinking “and criticism of cultural and academic movements that deny or devalue” its core planks, “namely naturalism, the search for truth, the universality of science, rationality, and respect for individuals. … At a time when specialization is widely decried …, it is salutary to see the fruits of one person’s pursuit of the ‘Big’ scientific and philosophical picture.”

In an emailed note to colleagues about the book, Alfonso Lizarzaburu, a Paris-based Peruvian educator, philosopher, and UNESCO consultant, says Bunge is “curious, open-minded, critical, creative, courageous, lucid, insightful, rigorous, and systemic to whom nothing human is alien. At the age of 100, he continues to make his life his masterpiece, and he impels us to push the limits of our ignorance and courage in order to live a good life.”

Lizarzaburu calls the number of publications Bunge has produced in such a wide variety of fields “astonishing.” And he adds, “I agree with what Laurent Jodoin asserts on Mario Bunge: He is undoubtedly one of the greatest sciences philosophers of the twentieth century. And he has everything needed to be in the present century.”

Among Bunge’s essays on science and pseudoscience is “The Philosophy of Pseudoscience” (Skeptical Inquirer, July/August 2006). In it he points out that science and pseudoscience each have philosophical ideas behind them. But they are totally different ideas and “orthogonal” to each other, totally at odds. When we published it in SI, I wrote that in my view “it provides a comprehensive, explanatory, intellectual, philosophical framework for virtually every issue we address in the Skeptical Inquirer.” Bunge argues that his “exercise in border patrolling” can help distinguish between good and bogus science and reveal why research guided by the wrong philosophy is likely to fail.

Decades earlier, Bunge wrote “What Is Pseudoscience?” (SI, Fall 1984), another seminal essay that listed and described several attitudes and activities by which to compare scientists and pseudoscientists. It provoked some controversy but still stands up well.

Bunge’s 2013 book Medical Philosophy, Bunge said, was the first that “analyzes and systemizes all the general ideas of medicine.” He pointed out that whether doctors realize it or not, medicine is firmly based on the philosophical principles of materialism, systemism, realism, scientism, and humanism. In her review in our January/February 2014 issue, physician and SI contributing editor Harriet Hall called it “full of insight and wisdom” and “a mind-stretching book.”

James Alcock reviewed Bunge’s 500-page memoir, Between Two Worlds, in our March/April 2017 issue. He pointed out that “staunch opposition to pseudoscience” has been a constant factor throughout Bunge’s academic career and that Bunge has always embraced “methodological rather than absolute skepticism.” “Methodological skeptics, he tells us, doubt only the insufficiently substantiated claims, reject the groundless ones, and suspend belief on untested propositions.” The memoir “reveals a man of exceedingly high confidence who has lived his life guided by strong principles about truth, science, and justice.”


Philosopher of science Mario Bunge has been honored with the publication of Mario Bunge: A Centenary Festschrift, an 827-page volume with forty-one chapters by scholars from sixteen countries written to honor him on his 100th birthday (September 14, 2019). Bunge is a longtime fellow of the Committee for Skeptical Inquiry and has written several key …