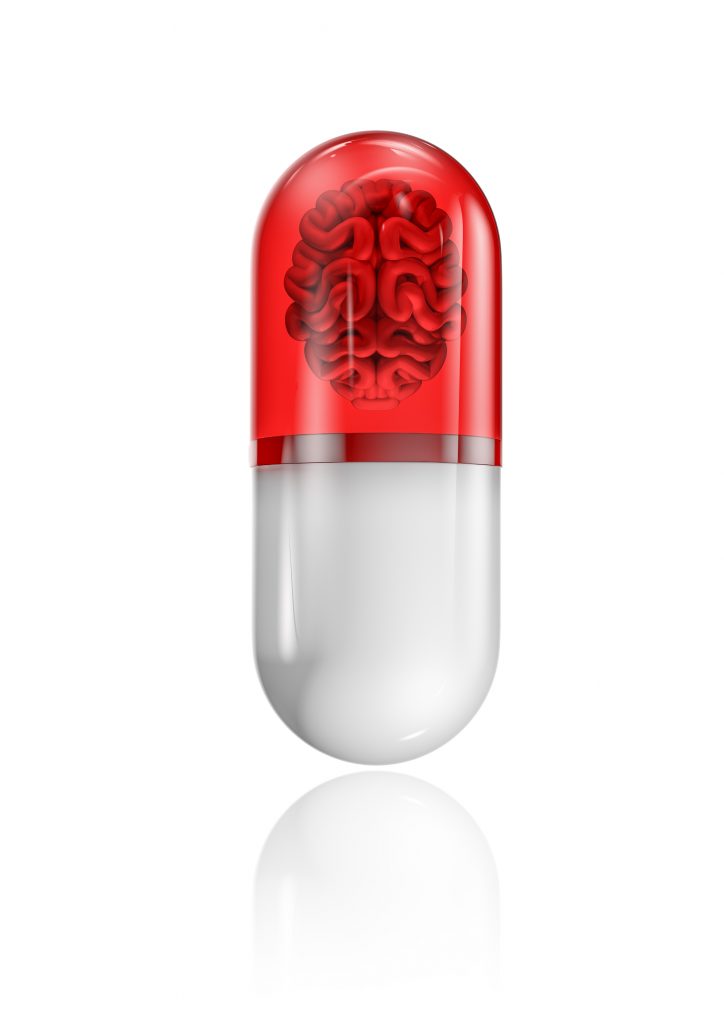 It sounds like the script of a science fiction/fantasy movie: The class dunce takes a pill and suddenly becomes smarter than everyone in the class, including the teacher. An elderly Alzheimer’s patient takes a pill and his memory is instantly restored—Alzheimer’s dementia cured! Don’t you wish? If only that sort of story could be true! Unfortunately, reality intrudes. There are no pills that have such dramatic effects. At best, some drugs (including amphetamines, Ritalin, and caffeine) might modestly improve a student’s ability to stay awake and maintain concentration when studying for a test.

It’s probably a good thing that there are no miracle smart pills. If a pill could really do such wonderful things, it would create some tough ethical dilemmas. If individuals could gain advantage from a pill, who will get that pill? What if it costs too much for most people to afford? Would you want to live in a world where any person could gain an unfair advantage over another by taking a pill? Especially if there were no way to know ahead of time whether you would be one of the disadvantaged or the privileged? Life is already unfair enough. I think I’d rather take my chances with the brain I was born with.

Unfortunately, there are people who will believe anything they wish were true; they have enthusiastically followed the PIED Piper. The acronym PIED stands for performance and image enhancing drugs. These can include drugs such as steroids, human growth hormone, and diuretics intended to improve appearance or athletic performance. These drugs can be dangerous. They are often abused,1 and many products are contaminated.2 A large part of PIED advertising is for dietary supplements that are claimed to improve memory and cognition; these are also known as smart drugs, cognitive enhancers, or nootropics. When Dr. Steven Novella reviewed these drugs, he concluded that nootropics and PIED are being abused and hyped without adequate evidence.3

Some TV commercials are cringe-worthy. I shudder every time they run the commercial for Prevagen that says it’s the “number one pharmacist recommended memory support brand.” If pharmacists really are recommending it, they shouldn’t be—because it doesn’t work. In fact, the Federal Trade Commission (FTC) and the New York Attorney General are suing the marketers for false and unsubstantiated claims that it improves memory, provides cognitive benefits, and is “clinically shown” to work. The complaint alleges that the manufacturers relied on a study that failed to show Prevagen works better than a placebo on any measure of cognitive function. They preyed on the fears of vulnerable older consumers experiencing age-related memory loss, and they charged exorbitant prices. The New York Attorney General called it “a clear-cut fraud” that “costs more than a week’s groceries but provides none of the health benefits that it claims.”4

The number of Americans over sixty-five is projected to nearly double from 52 million in 2018 to 95 million in 2060, when they will make up nearly a quarter of the population. There are measurable changes in cognitive ability and memory functions as we age. Most of us old folks are aware that we aren’t able to think or remember things as fast or as accurately as we once did, and we are deathly afraid of descending into Alzheimer’s or other forms of dementia. Wouldn’t it be great if we could take a pill that would restore our memory and our mental sharpness?

To be clear: there are prescription drugs proven to improve cognitive function in patients diagnosed with specific diseases. In 2016, the American Medical Association adopted a new policy discouraging the use of prescription drugs for cognitive enhancement in healthy individuals.5 They pointed out that drugs approved to treat attention-deficit hyperactivity disorder (ADHD) and narcolepsy were being used off-label by students and others seeking to boost memory or learning, and such use is associated with a variety of adverse effects. In one study, 11.3 percent of college students admitted to taking prescription stimulants that had been prescribed for other people. Amphetamines, dextroamphetamine (Adderall), and methylphenidate (Ritalin) were the most commonly used, and students took them mainly to enhance alertness and to improve academic performance. Students are more likely to use coffee and energy drinks than stimulant pills. Prescription stimulants do not make people smarter. The effects are “highly variable among individuals, are dose-dependent, and limited or modest at best in healthy individuals.”

Dr. Joe Schwarcz, chemistry professor and science communicator extraordinaire, has examined Prevagen’s claims and handily refuted them.6 The supposed active ingredient is a jellyfish protein called apoaequorin. It binds to calcium, which plays a crucial role in brain function. But it has to be just the right amount of calcium; high levels of unbound calcium can wreak havoc with nerve cells, impairing thought and memory, not enhancing it. Effects that have been documented in the lab in cell cultures are irrelevant to human health, because the protein is broken down by digestion and never gets into brain cells. The manufacturer of Prevagen hypes a single in-house placebo-controlled trial that allegedly showed memory improvement after ninety days. Although there were some positive results in a few specific tests, overall the placebo group performed as well as the experimental group. Apart from this questionable trial, there are no peer-reviewed studies attesting to the safety and efficacy of Prevagen. Schwarcz points out another kicker: “The company’s ‘evidence of safety’ basically admits that the product cannot work.” It admits that the protein is broken down by pepsin in the stomach and has no chance of getting to the brain.

As if that weren’t enough, the Federal Drug Administration (FDA) has also charged that Prevagen does not qualify for marketing as a natural dietary supplement, because apoaequorin is synthetically produced. The manufacturer also failed to disclose over a thousand reported adverse reactions to Prevagen, including seizures, strokes, fainting, and even memory impairment and confusion—the very symptoms that Prevagen is supposed to treat! Dissatisfied consumers have filed a class-action lawsuit.7

Do those pharmacists who are recommending Prevagen know all this? They should. And they should know it is unethical to recommend it. But then, pharmacies carry homeopathic remedies on their shelves alongside real medicines (see the Center for Inquiry’s recent legal actions against CVS and Walmart pharmacies for doing so), so what could we expect? It seems you can’t trust the average pharmacist to be scientifically accurate and ethical.

There are many other dietary supplement products with similar claims. One of them, Procera AVH (the “Memory Pill Does for the Brain What Prescription Glasses Do for the Eyes”) makes claims such as:

Those are all lies. I looked for the published evidence and found that it absolutely did not support those claims.8 There was a single study of the product. It measured all kinds of factors but only found improvement in three of them (working memory accuracy, long-term memory consolidation, and one measure of mood). The magnitude of those effects was small and probably not clinically significant, and the study is suspect because it was commissioned by the manufacturer and reported by them as showing effects that it did not show.

Procera AVH is a mixture of three ingredients, and the evidence for each of them is thin gruel indeed. For Vinpocetine, there was a small preliminary study of twelve healthy volunteers whose memory apparently improved. For Huperzine A, there was one small study of students in China, and a Cochrane review found inadequate evidence of effectiveness for dementia. For Acetyl-L-Carnitine, the only studies were in Alzheimer’s patients, and the evidence was not objective.

Evidence for Some Products

Piracetam is a popular nootropic, but a Cochrane systematic review concluded that while further research is indicated, the evidence is currently insufficient to recommend it for clinical use. Modafinil is a prescription drug for narcolepsy and other neurologic diseases that is sometimes abused by students. When used by healthy subjects, their responses were slower and were not more accurate. Many combination products include a stimulant such as caffeine, which is probably responsible for any positive effects observed. The effects of stimulants are problematic. They may make users feel more alert but not actually improve performance; in fact, they sometimes decrease performance—and regular users quickly develop tolerance.

ConsumerLab has evaluated the evidence9 for supplements sold to enhance cognitive function and memory. They list a few supplements that may provide modest benefits in some people. They say, “Although green tea has been touted for improving brain function, this effect is not well established. Other supplements touted for brain function, such as Gingko biloba and vitamin E have, by and large, not been found to be helpful.” While most reviewers agree that the hype for nootropics greatly exceeds the evidence, there are some non-pill measures people can take to help maintain cognitive health:

The story of the Pied Piper of Hamelin is a cautionary tale dating back to the thirteenth century. He was a rat catcher hired by the mayor to eliminate a plague of rats. He lured them out of town with his magical music and piped them into the Weser River, where they died by drowning. Then, when the mayor reneged on his promise to pay, the rat catcher took a chilling revenge: he lured all the town’s children out of town. In some versions, he returned them after he was paid a ransom far larger than his original price; in others, the children vanished mysteriously, never to return (see Massimo Polidoro’s column “The Legend of the Pied Piper” in our January/February 2008 issue).

There are many parallels with the Nootropic PIED Piper. They both involve rats, in this case of the human variety. Characters behave unscrupulously. Promises are made and not kept. The piper plays a siren song that entices everyone who hears it. Rats and people follow it willingly and don’t ask questions. There are allegedly miraculous effects. The modern PIED Piper won’t lure your children away, but it will lure your money away with false promises.

Beware the PIED Piper. For that matter, beware any dietary supplement or advertising claim unless you can verify the evidence behind the claims. You can’t believe everything you read.