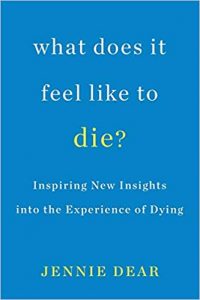 We’re all going to die. What does dying feel like? We can’t really know, because no one has come back after death to tell us. For those who die suddenly (for instance from a fatal gunshot to the head), there probably isn’t time to feel anything. But 90 percent of people die slowly from a fatal disease. What can we expect to happen during the days, months, or even years between diagnosis and departure?  In her book What Does It Feel Like to Die? Inspiring New Insights into the Experience of Dying, Jennie Dear reports on recent research and observations about that period and peppers her reporting with anecdotes from her experiences as a hospice volunteer and as a caregiver for her dying mother. Understanding this information can help us prepare for our own death and can suggest coping strategies.

Depictions of death on TV and in the movies are unrealistic; the characters are awake and carry on meaningful conversations, then suddenly close their eyes and die. That’s not how it works. In the days when deaths occurred at home, most people had seen a relative die. Today we have a lot of knowledge about what happens in the body as it begins shutting down. It’s a gradual process.

Most people accept the idea of their own death intellectually but not emotionally. They don’t really believe they are going to die until they get that existential slap and realize that their disease is really going to kill them. After that realization, they may experience depression, anxiety, despair, anger, and a loss of identity and meaning. This phase tends to last an average of three months. When the initial distress subsides, expectations change, and patients find ways to cope. They may even find a new meaning in life and a richer sense of who they are.

Scenario 4 is the most likely. Modern medicine keeps us alive and allows us to remain sicker longer. Witnesses tend to ascribe a lower quality of life for dying people, but studies have shown that the patients themselves rate their quality of life the same as healthy people, or sometimes even better.

We all have to die of something, and preventing one cause of death only increases the incidence of deaths from other causes. In this regard, Dear points out that seatbelts could be considered carcinogenic.

Elizabeth Kübler-Ross’s five stages of grief in terminal illness are denial, anger, bargaining, depression, and acceptance. They have not been validated by peer-reviewed research and are frequently misunderstood. They don’t apply to everyone, and they don’t happen in any particular order.

Patients are not so much afraid of dying as afraid of pain, losing control, and becoming dependent on others. One of the attractions of alternative medicine is that it can give the illusion of control. And it can offer an illusion of certainty where conventional medicine is uncertain. Eighty percent of prognoses about how long a patient will live are wrong, and phrases such as “The doctor said I had six months to live” can be misunderstood. Doctors can’t predict the future; at best, they can only offer a guess based on the average historical life expectancy of more-or-less comparable patients.

Eighty percent of Americans say they want to die at home, but only 30 percent actually do. They may not get to choose, or they may change their mind when home care proves unrealistic or problematic for various reasons. More and more patients are dying in hospice, where they get palliative care with no intent to prolong life. Forty percent of hospice patients use the service for two weeks or less.

Pain can almost always be controlled, but there is a trade-off with side effects such as sleepiness. Sometimes the only way to completely relieve pain is palliative sedation, keeping the patient unconscious. Pain is not the same as suffering; the same physical pain will cause less suffering if the patient believes it is temporary. Psychological interventions are being tested to help people cope better with dying. They can help patients reassess their priorities, find meaning in their lives, develop positive attitudes, resolve unfinished business and personal conflicts, and express the things they want to say to loved ones. Impending death can be reframed as a normal life stage, a second chance to correct past errors, and an opportunity for post-traumatic growth.

Dear discusses why some people want to hasten their death and describes both legal and illegal ways to do it. She discusses phenomena such as hallucinations, delirium, insights from near-death experiences (NDEs), terminal agitation, plucking, visions, the death rattle, and terminal lucidity, where an unconscious patient becomes awake, lucid, and coherent right before dying. As the body systems shut down, people lose interest in the outside world. They lose hunger, then thirst, then speech and vision. Hearing and touch are the last to go. They may enter into a dreamlike state. Death itself is usually painless and peaceful.

She presents facts supported by references to scientific studies and illustrated by anecdotes. Most of what she says is not controversial, but not everyone would agree with her characterization of “active dying.” One of the instructors in my residency program had been assigned to manage a ward of terminal patients during his training. He told the patients they were not dying, they were living (and would continue to be living until they actually died). He tried to create a pleasant living environment in the ward, and he let patients out on passes to go do the things they loved to do, such as fishing. His superiors got very upset because their patients were out dying all over the county instead of in their hospital beds. He thought that was a good thing, and I do too.

This little (206-page) book contains a wealth of information and food for thought. Unless you have somehow discovered the secret of immortality, I think you would benefit from reading it. I know I did. I feel better informed and better equipped to face my own death and the deaths of my loved ones.