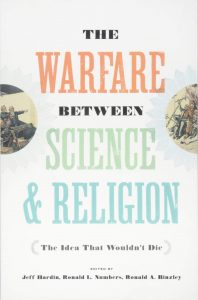 In the introduction to The Warfare between Science and Religion, its thesis is clearly laid out: “There has never been a systemic warfare between science and theology, and this book explains why the notion nonetheless lives on.” The editors further state that the idea of a struggle between science and religion is hard to eradicate and that historians have successfully demonstrated that there is no such struggle. This was previously argued in Joshua Moritz’s book Science and Religion (2016), but this new book takes a different approach with a series of chapters, each written by accomplished experts in their fields (and partially based on books they previously published), that breaks down the argument into components that are each examined in detail. The first portion of the book reviews the history of the alleged struggle, its origins, and associated myths. Then comes a series of chapters on the major religions and Christian denominations and finally summaries of the views of atheists, historians, and scientists.

A common theme in the book is that the modern warfare model traces back to two works from the late nineteenth century: John William Draper’s 1874 History of the Conflict between Religion and Science and Andrew Dickson White’s 1896 A History of the Warfare of Science with Theology and Christendom. Both books advanced the thesis in which there is an inevitable conflict between science and religion. But each is criticized for being motivated by outside factors and not referencing the historical evidence. White is criticized for letting his arguments with the church about the founding of Cornell University bias his views, while Draper is criticized for documenting his conclusions with erroneous and misleading statements.

Further exploration of the history of the alleged conflict comes in a chapter delving into the Galileo Affair. Here Maurice Finocchiaro (who previously wrote several books on the subject) tells us that the trial was not just about a conflict between science and religion but that there was a deeper conflict between conservatives and innovators in the church. As a result, it was possible to be a devout Catholic at that time and see no conflict with the heliocentric model. Thus, the conflict between science and religion is not as clear as a simplistic analysis of Galileo’s trial and subsequent house arrest might suggest.

This is followed by a series of chapters on how different segments of society, parsed more or less along religious lines, view the conflict. For Catholics, Protestants, Jews, and Muslims, there just is not much of a conflict—or only within the minor conservative elements. The chapter on Protestant evangelicals by Bradley Gundlach (a friend of mine) also refers back to Draper and White and goes on to establish that even within the evangelical community, the prevailing view was that there is no serious conflict.

Special criticism is focused on the New Atheists (particularly Sam Harris, Richard Dawkins, Daniel Dennett, Jerry Coyne, and Christopher Hitchens), who all claim that organized religion is antithetical to science. But how could they reach the opposite conclusion of the historians and other experts who contributed to this book? The answer, the latter say, is that “none of the New Atheists is a historian” (223). Their analyses lacked historical context and commonly was in conflict with historical data. At this point we can also note that none of the authors of this book is a scientist other than biologist Jeff Hardin. He is author of the New Atheist chapter and first-named editor of the book.

The thesis of no conflict is further supported by an analysis of modern scientists’ religious views based on a survey of over 6,000 scientists in eight countries. The authors conclude that despite the popularization by a few “celebrity scientists” (such as Dawkins) most scientists do not perceive a conflict between science and religion. However, the surveys also revealed that the conflict thesis is more widespread in the western countries surveyed (the United States, the United Kingdom, and France), where scientists were significantly less religious than the general populations.

So, is it true that the conflict thesis has been greatly exaggerated and that there is little evidence to support it? The book is not an investigation into evidence for and against the conflict thesis but rather an investigation of why the claims of conflict are so inflated. Thus, there is no real evaluation of much of the recent evidence. The book was based on a conference supported by the Issachar Fund to understand why the conflict thesis persists despite historical evidence to the contrary. The Issachar Fund is a private operating foundation that “supports learning that moves beyond amassing information and toward enriching communities of faith and the flourishing of our society.” The conference brought together historians, sociologists, and philosophers to investigate the persistence of the conflict thesis.

Notably missing from that conference (based on its description) were any scientists to offer their perspective. Also missing from the book is the abundant evidence of the modern conflict in the United States. Although people of most religions may not perceive a conflict, there is a narrow evangelical interpretation of biblical chronology that conflicts with much of science. This narrow interpretation of Christian philosophy is very popular in the United States and has impacts reaching far beyond churches and science labs. This particular dimension of the conflict is not investigated in any detail, and where it is described, it is inaccurate. The young-earth creationists (YECs) are briefly described in the New Atheists chapter where the Institute for Creation Research (ICR) is described as “venerable.” Kind appraisals of intelligent design proponents such as Phillip E. Johnson and Alvin Plantinga are based on philosophical arguments lacking reference to any data in support of evolution without supernatural guidance. And there is no discussion of the philosophical implications of the scientific method, specifically that supernatural intervention cannot be considered because it immediately shuts down scientific inquiry.

There is also a long list of evidence of direct conflict that is either not mentioned or mentioned only in passing. There are only brief mentions of the “venerable” ICR and Ken Ham’s Answers in Genesis and the Creation Museum. No mention is made of the organizations on the other side, such as the National Center for Science Education (NCSE), which was created specifically to fight attempts to force creationism into public schools.

Most puzzling is the lack of mention of the constant flow of antiscience bills, mostly at the state level, that attempt to water down the teaching of evolution or insert creationism into the classroom. These bills are all religiously motivated, and their numbers belie any claim that the conflict is mostly in the minor backwaters of Christianity. This is direct evidence of the actions and real-world consequences of young-earth creationists today. According to the NCSE, in 2019 antiscience bills that could weaken teaching of evolution have been introduced in Arizona, North Dakota, South Dakota, Oklahoma, Iowa, Indiana, South Carolina, Florida, and Maine (see https://ncse.ngo/catalyzing-action). The Indiana bill would specifically allow the teaching of creationism in public schools. This proposed legislation is too recent to have been included in the book, but similar bills are proposed every year. And there is no discussion of how the proposed bills have evolved over time to attempt to pass constitutional muster, in part based on the two modern creationist trials, Kitzmiller v. Dover (2005) and McLean v. Arkansas (1981), neither of which is mentioned in the book.

Other evidence not mentioned are the many scientific organizations that have come out against creationism. The ACLU lists about fifty scientific societies that specifically oppose the teaching of creationism or intelligent design (https://www.aclu.org/other/what-scientific-community-says-about-evolution-and-intelligent-design). If there was no active campaign to infiltrate creationism into science classrooms, these organizations would not need to issue statements supporting science and against creationism.

The final chapter, “The View on the Street” by John Evans, is the most direct analysis of the conflict between YECs and science. He claims that YECs dissent from “very few scientific claims … only about human origins.” He further states that evolution and the big bang cannot be observed and thus are merely speculation. This, and similar statements in the chapter, reveal a profound lack of understanding of how science works and that theories of ancient events can be scientifically tested.

Evans correctly states that scientists get upset because evolution is important to biology, but he does not appreciate just how central the YEC attacks are on science. YECs dissent from the core theories uniting several sciences. These include:

1. Evolution (not just human evolution), the central unifying theory of all biology and paleontology

2. Plate tectonics, the central unifying theory for all of geology

3. The big bang theory, central to all of astronomy and cosmology

Very little in science makes sense except in light of these theories, and they are all being attacked through social media, schools, and in legislation.

Repeatedly in the book we read the statement that there is no conflict between science and religion. But what does this mean? Even stout creationists will agree with this, while rejecting evolution. For example, William Bell Riley in the early 1900s was a Baptist defender of his faith and opposed to evolution but still stated that “Science and the Bible are not in conflict” (Chapter 9, p. 175). And more recently, along the same lines is the 2012 DVD by Ken Ham, Science Confirms the Bible. In the book’s chapter on evangelical Protestants, Gundlach ends by noting that “evangelicals agreed that the conflicts between science and religion were ultimately misconceived, for true science and true religion could never finally conflict.” Statements such as these are ultimately meaningless and attempt to downplay the conflict because each side gets to choose what is true science and what is true religion.

The book defends a common theme among historians that there is no inevitable conflict between science and religion. This may be true for many religions and denominations but is certainly not true for many Americans who perceive evolution and an ancient universe as a direct threat against their religious views. The book minimizes the conflict by devoting many pages to religions that do not conflict with science while virtually neglecting the conflict between YECs and science, misstating the depth of the conflict, and just ignoring almost all the modern evidence of the conflict in the United States. For a book about the warfare between science and religion, they left out most of the modern battles.

Howard Feldman has worked as a petroleum geologist and paleontologist for the past thirty years. He has published technical articles in geology, mostly stratigraphy.


The Warfare between Science and Religion: The Idea That Wouldn’t Die. Jeff Hardin, Ronald L. Numbers, and Ronald A. Binzley, editors. Johns Hopkins University Press, 2018. ISBN 9781421426181. 368 pp. Softcover, $39.95.   In the introduction to The Warfare between Science and Religion, its thesis is clearly laid out: “There has never been a systemic …