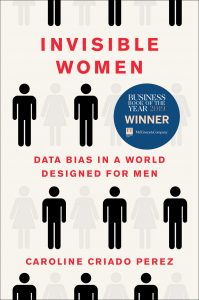 Unlike many popular books on gender differences and conflicts, Invisible Women: Data Bias in a World Designed for Men refreshingly ignores brains, personalities, and stereotypes. Instead, Caroline Criado Perez shows why sexism (efforts to discriminate against women and keep them out of traditionally male spheres) and misogyny (hatred of women) are not the only problems women face on the road to equality. The third roadblock is what she calls women’s “invisibility,” and it is in some ways the most difficult to jump over, because, by definition, most of us—women and men alike—simply don’t see it.

Criado Perez doesn’t mean that women are literally invisible, of course—not with all the noise that women have been making about sexual, political, and professional rights. She means that in a world that men have created and designed, men hold a deeply embedded, unconscious assumption that their way of doing things and solving problems is the normal, inevitable way. This is not a malevolent feature of the male mind; all of us are biased to see our way of doing things as the best way, designing solutions that work for us without paying much attention to whether those solutions work for other groups we’re not thinking about. But gender is a universally powerful category, and as Criado Perez shows in a well-researched and dazzling array of examples, women’s “invisibility” can produce consequences that range from the minor to the irritating to the fatal.

Consider, she says, how many items and practices are designed with reliance on the average (“normal”) male body: iPhones and smart watches; uniforms for the military and safety workers; temperatures in offices set at a level more comfortable for most men rather than women; VR headsets that are too wide for many women and more likely to generate motion sickness; voice commands that often don’t register women’s higher voices. For decades, car safety design was determined with crash-test dummies based on the average height and weight of males, who are assumed to be, as usual, in the driver’s seat. Some efforts to remedy that problem have been made, but even female dummies are primarily tested in the passenger seat. Given that women are far more likely than men to be seriously injured in a car crash, Criado Perez observes that is “one hell of an inequality to be overlooking.”

In a splendid early chapter that sets the stage for the surprises that follow, “Can Snow-Clearing Be Sexist?,” Criado Perez shows why the answer is yes. In Sweden (as elsewhere), snow clearing began with major traffic arteries and ended with clearance of pedestrian walkways and bike paths. Reasonable, right? Wrong. This way of prioritizing snow clearance was affecting men and women differently because women’s needs were invisible to city planners. Women are more likely than men to walk and take public transport, and they travel more throughout the day, because of child- and elder care, marketing, errands, and the like. Thus, the city’s snow-clearing plans were not gender neutral. The city planners switched the clearance plan to put pedestrians and transport users first, figuring it wouldn’t cost more and would be easier to drive a car through three inches of snow than walk or push a buggy, wheelchair, or bike. To their surprise, the result was beneficial financially and medically. In snowy and icy conditions, pedestrians are injured three times more often than drivers, and the cost of pedestrian accidents due to ice is two to three times higher than the cost of road maintenance. Making women “visible” significantly reduced the number of hospital visits and saved the city money to boot.

Every woman who has ever waited for what seems like hours to use a public bathroom stall, namely all of us, will read Criado Perez’s chapter on sanitation with a mix of exasperation and fury. Here is a case in which “equal” is inherently unfair: having the same number of bathrooms in public spaces is unequal, because women take up to 2.3 times as long as men to use the toilet—not only because of tampon use but also because women are more likely to be accompanied by children, to be old or disabled and need more time, and to be pregnant or have urinary infections that increase the frequency of urination.

More worrisome, hazmat suits, police vests, and other “Personal Protective Equipment” (PPE) are designed for men, with little to no accounting for women’s breasts and hips and certainly no accounting for differences in how difficult and even hazardous it is for women to use a toilet when having to remove the top as well as bottom of a body suit, as when working in frigid weather and risking frostbite. (Yes, they know about pee shooters.) For women, PPEs are usually neither personal nor protective, forcing them to choose between struggling with outfits that don’t fit and are even painful or being unprotected from knives, impacts, and guns.

Perhaps the most important chapters are those on the persistence and consequences of the male norm in medicine: in the research questions asked, in the development and effectiveness of drugs, in diagnosis and treatment. Doctors rarely learn that sex differences are found in “every tissue and organ system in the human body.” If a woman’s symptoms don’t fit a doctor’s preconceived notion of what they indicate (as with heart disease) or if the doctor can’t easily find the cause of her symptoms (as often happens with endometriosis, when uterine tissue grows outside the uterus, causing immense pain), her complaints are likely to be trivialized or dismissed. Treatments that might have benefitted women have been rejected because they didn’t work in men, and many treatments that do benefit men (e.g., statins to prevent a first heart attack or hypertensives) don’t work as well, or even work at all, in women. Effective dosages of many drugs, standardized on men, differ in women (and, by the way, in old people and non-white populations). That these mistakes are still going on is a scandal; Criado Perez writes: “Women are dying, and the medical world is complicit.”

By emphasizing how many problems occur because of women’s invisibility rather than men’s misogyny, Criado Perez opens our eyes to creative solutions that benefit everyone. For example, in the 1990s, Viennese researchers found that after age ten, girls stop using public parks and public playgrounds. Why? Something in girls’ wimpy nature or boys’ aggressive nature? Should girls be taught to lean in and boys ordered to lean out? The problem was that the parks were designed as large open spaces, which forced girls to compete with boys for the space. Most girls didn’t want to compete or lacked the confidence to demand territory, so they let the boys have it. But when parks were subdivided into smaller areas, girls returned. Similarly, think of all the sports areas you have seen, those large barren spaces enclosed by ugly wire fencing, with one entry—enabling boys to congregate there and taunt girls wanting to enter. No wonder girls stop using these spaces; who wants to run the gauntlet of obnoxious boys or teenage louts? A woman designer came up with the solution: create more entrances and wider ones; subdivide the sports courts and provide more space for informal activities that girls like. Now all parks in Vienna are designed this way, and the sex difference in use of the parks has evaporated.

The theoretical underpinning of this book is not new; every generation of feminist scholars rediscovers Simone de Beauvoir’s 1949 observation that women are the second sex, the “quintessential Other,” eternally measured against men and found different, deficient. Likewise, some of Criado Perez’s observations have been known for decades, ever since women began entering fields formerly closed to them. Man the Hunter wasn’t enough without Woman the Gatherer. Man the Promiscuous found Woman the Equally-If-Not-More Promiscuous. Mankind the Violent and Competitive met his partner in Humankind the Peaceful and Cooperative. Man the Paid Worker learned that he contributes far less to the world economy than Woman the (Invisible) Unpaid Worker whose housework and caretaking activities are indispensable. But Criado Perez adds to this list other discoveries that scientists have made once they let women in the door: Ancient cave paintings assumed to be the work of male hunters? Analysis of handprints suggests the majority were created by women.

Criado Perez is fully aware of the wrath of men toward women who dare to become visible—a rage that seems to be escalating as women continue their march into politics, science, and technology. That anger, she argues, comes “from a place of fear”—fear of losing power and status they assume is rightfully theirs. “I believe that the onus is on those of us who feel able to weather the storm, to do so,” Criado Perez admonishes her young readers. “Our” generation of women has to weather this storm, she says, “in order that the women who come after us don’t.” This sentence did make me smile; we older readers are apparently invisible to her! My mother lived it ninety years ago. De Beauvoir could have written it seventy years ago. I could have written it thirty years ago—and did. Women have been weathering the storms of misogyny, sexism, and invisibility for centuries. Criado Perez doesn’t look backward to see how far we have come, but this splendid book certainly illuminates the path going forward, revealing how much remains to be done.

Carol Tavris, Ph.D., is a social psychologist, writer, and lecturer. She is author of a recent collection of book reviews and essays, Psychobabble and Biobunk, coauthor of three introductory psychology textbooks, and the book Mistakes Were Made (But Not By Me).