Despite the beliefs of many people, scientists have yet to find any compelling evidence for life beyond Earth. But that doesn’t mean we’re alone. If our world is the only place where biology exists, then life isn’t a frequent product of natural processes; it’s a miracle.

The support for this daring statement is simple. In the past two dozen years, astronomers have discovered that planets are more common than cheap burger joints. Our galaxy shelters approximately a trillion planets, and the visible universe is home to two trillion other galaxies. Unless you’re vain enough to believe that Earth is idiosyncratic and exceptional in some important way, it’s reasonable to expect that life is widespread. 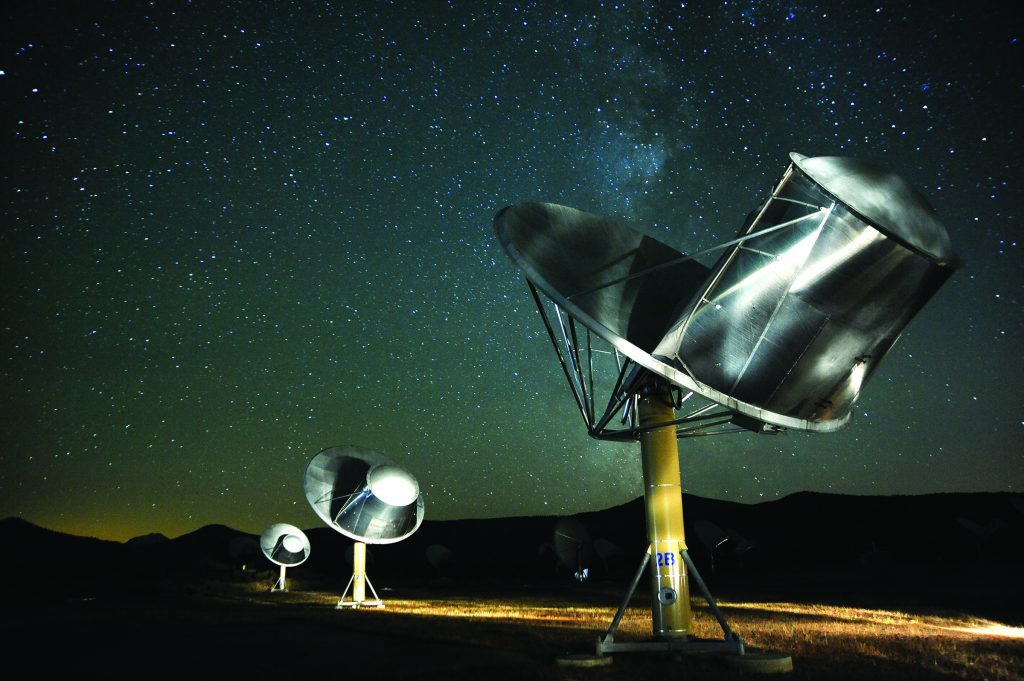 Almost all contemporary efforts to discover extraterrestrial biology have been directed to finding it elsewhere in our solar system—on Mars or beneath the frozen surfaces of some of the moons of Jupiter or Saturn. NASA and other space agencies are hunting on these worlds for microbes, the only life forms that can withstand their harsh environments.

But a few dozen scientists, operating with private funding, are listening for radio signals coming from much farther away—signals that would prove the existence of something more clever than extraterrestrial pond scum. They hope to find evidence of intelligent beings living in other star systems. This experiment is called SETI, the Search for Extraterrestrial Intelligence, and its prey are the real-life equivalents of the dark-eyed aliens who frequently grace the imagery of movies and television. Decades of polls have shown that the majority of Americans (and anyone else who’s asked) feel confident that such sentient beings, friendly or otherwise, are out there (Lampert 2017).

However, there’s a nasty controversy that plays counterpoint to these listening efforts. Roughly one-third of the populace feels that SETI practitioners are ignoring the obvious. There’s no need to plumb the far reaches of space for cosmic company, because the aliens are right here on Earth, tripping through the troposphere in craft reported as UFOs (Whalen 2019). The intent of these presumed aliens is unclear, but they are apparently happy to dazzle military pilots with aeronautical acrobatics and occasionally pluck people from their bedrooms for probing and prodding.

The pages of this magazine routinely feature analyses of the more intriguing UFO reports and in particular to what degree the evidence offered is of decent quality. But in addition to these detailed investigations, it’s fair to ask if the basic assumptions made by the UFO crowd are reasonable. Specific claims aside, does it make sense to think that our planet is hosting visitors from light-years away? After all, the folks who think so are not totally goofy: They’re not suggesting an obvious violation of physics, nor are they in the same camp as, for instance, those who would claim a cure for cancer based on a homeopathic regimen.

Despite the fact that it’s physically possible, rocketing from one star system to another either requires that passengers have the patience of Job or that spacecraft designers can somehow muster the enormous reserves of energy necessary to cross light-years of distance in a reasonable time—preferably before the crew dies. NASA’s fastest rockets clip along at ten miles per second, a speed that would take you from San Francisco to New York in three minutes or to the Moon’s cratered crust in as little as eight hours. But using such hardware to visit even the nearest other star system would be a wearying slog—80,000 years—a long time to spend eating miniature pretzels and watching third-run movies. 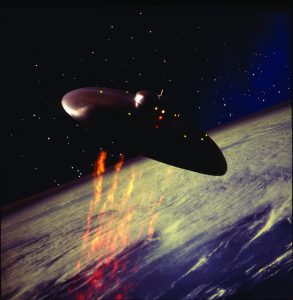 You could cut this tedious travel to a more reasonable ten years by building a much faster vehicle. And thanks to special relativity, the on-board crew would benefit from a modest slowdown in aging if you did so. But such a craft would require 100 million times as much energy as a NASA rocket to get up to speed. This is a physics problem, not an engineering one, and it’s not easy to solve.

There’s additional fine print. High-velocity travel though space means bulldozing through the dust and gas that bathe our galaxy at a blistering pace, turning it into tiny bullets that will pierce the hull of any rocket and quickly dispatch the biology within.

UFO fans counter these dispiriting arguments against anyone boldly going to other star systems by saying that the aliens are using physics that we don’t yet know. Presumably, extraterrestrial visitors have mastered something akin to warp drive or breaking into hyperspace. Savvy readers will recognize that this is akin to claiming that while scientists don’t understand how wispy ectoplasm works, that’s irrelevant because ghosts do. But the point is that whatever the details of a particular UFO report, the idea of cosmic creatures on a jaunt to Earth is, a priori, suspect.

A Matter of Timing

Aside from the transport problem, there’s an additional puzzle about the UFO hypothesis that’s seldom recognized; namely, why are the aliens visiting now? After all, Earth has a four-billion-year history, and Homo sapiens has been shuffling around for 300,000 years. You can’t credibly maintain that the extraterrestrials have been here all that time. Many thousands of UFOs are currently reported in the United States each year (McClure 2019), but fast-moving objects in the sky were not a thing even as recently as the nineteenth century. Why is the post-war generation the first and apparently the only one to host extraterrestrial beings—cosmic visitors who’ve come to disturb us with their aerial antics and their unholy interest in our private parts?

In my experience, the most common answer given by those partial to the UFO idea is that the aliens are here now because they’re concerned about our development of nuclear weapons or our affronts to the climate and environment. One could argue that such suggestions are suspiciously anthropocentric; after all, why weren’t the aliens upset by the Romans’ subjugation of the peoples of Europe two millennia ago?

But a stronger rebuttal is simply to note that the extraterrestrials don’t know of any of this bad behavior. The only way they could be aware of such matters is by picking up our broadcasts, which inevitably belch information about our society into space at the speed of light. However, those unintentional messages have been launched only since the Second World War, with the development of FM radio, television, and (most notably) radar. Transmissions before the war were generally at low frequencies that would be refracted by our ionosphere.

In other words, we turned on the porch light a mere seventy-five years ago. And because spacecraft are limited to the speed of light by Einstein’s cosmic rules, it means that any barnstorming visitors could not have come from more than thirty-seven light-years away. If you’re inclined to believe reports from, say, the 1940s—including the celebrated Roswell incident—then there’s a real problem: There wasn’t enough time for aliens even from the nearest other stellar system to pick up signals from Earth and highball to the New Mexico desert soon enough to spiral into the dirt near Roswell.

The simple fact is that there are fewer than two thousand stars within thirty-seven light-years. It beggars belief to say that the cosmos is so densely packed with aliens that some are camped out so near to us. If you assume that there are between one and 100 million alien societies in our home galaxy now (an optimistic estimate), then the closest would be a few hundred light-years’ distant. They won’t know about us. They won’t be aware of our penchant to risk self-destruction, our fascination with football, or any other thing about our species. This is the basis of the “Why are they here now?” dilemma. 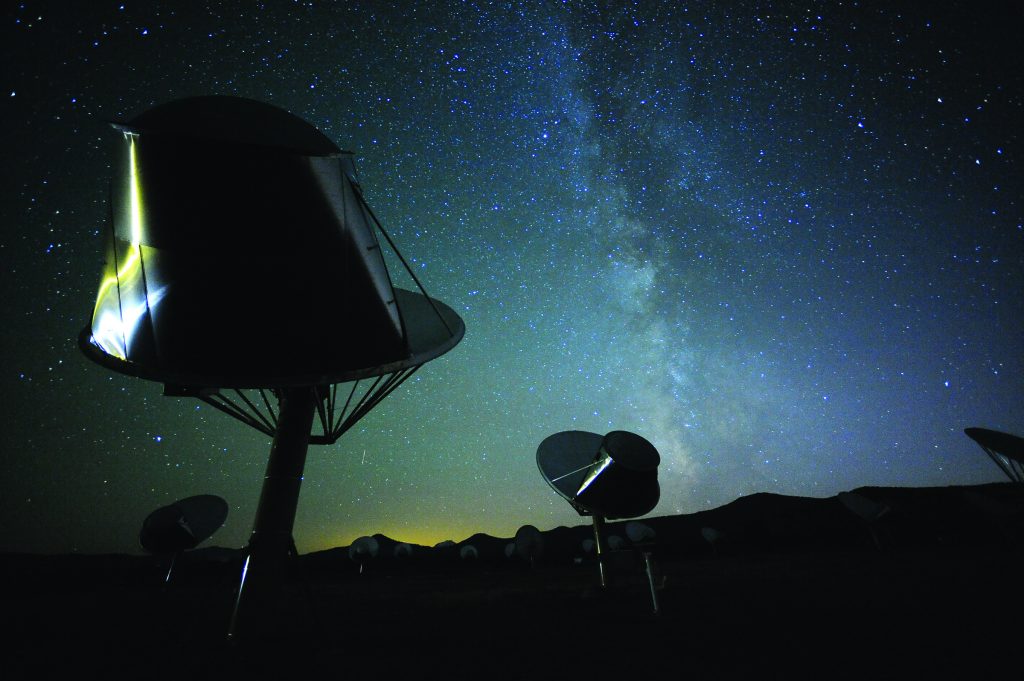 It’s All a Bit Provincial

A final bothersome aspect of the UFO phenomenon is that these putative visitors are picky about their travel itineraries, usually choosing to buzz the United States or Europe. The aliens don’t seem to have much interest in landing on the White House lawn, although they have famously done so in the movies (Influence of the Media 2020), but apparently prefer to frequent less urbanized locales. UFO lore speaks of them jetting through the open skies of the American Southwest or hanging around our cold-war missile silos.

Admittedly, this penchant for avoiding high-density areas could be a consequence of selection effects, either in the reports or the degree to which they’re publicized. But the idea that the aliens favor developed nations is useful in connection with a currently fashionable belief of UFO proponents: namely, that we are on the cusp of “disclosure.” According to this hopeful aspiration, proof that Earth really hosts extraterrestrials is about to be made public by the federal government.

This seems fishy for at least two reasons: (1) it presumes that the U.S. government has been able to keep the matter of extraterrestrial presence quiet for seventy years or more, an unprecedented feat of secrecy; and (2) it requires that the 192 other countries on this planet have either been boycotted altogether by the aliens or have—like the Americans—also been covering everything up. Such a worldwide, cooperative conspiracy would be stunning and unprecedented (see “The Phantom Menace of UFO Revelation” in the July/August 2018 Skeptical Inquirer).

In the end, the question of whether UFOs are truly interstellar spacecraft needs to be addressed by careful examination of the claims, an activity that’s often documented in the pages of this publication. But it’s also the case that—as we’ve argued—there are good reasons to be skeptical that aliens have come to Earth just in time for our generation to host them, even aside from the particulars of any specific report.

The ability of SETI to find a verifiable signal from the stars that would prove there’s someone (or something) out there is improving rapidly, and it’s hardly inconceivable that we will soon learn that aliens really do populate the cosmos. What that discovery would do to the UFO ecosystem is unclear. But meanwhile, there seems little reason to tell the Federal Aviation Administration that they are failing to adequately control our airspace.

Influence of the Media. 2020. The day the Earth stood still. Encyclopedia of the Unusual and Unexplained. Available online at http://www.unexplainedstuff.com/Invaders-from-Outer-Space/The-Influence-of-the-Media-The-day-the-earth-stood-still-1951.html.

Lampert, Martijn. 2017. Majority of humanity say we are not alone in the universe. Glocalities.com survey. Available online at https://glocalities.com/latest/reports/majority-of-humanity-say-we-are-not-alone-in-the-universe.

Seth Shostak is Senior Astronomer with the SETI Institute and host of Are We Alone?