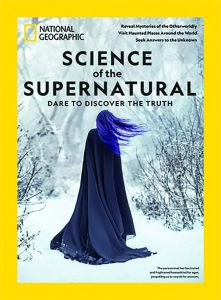 The good name of the National Geographic Society (NGS) is unfortunately being misused, as Skeptical Inquirer has reluctantly noted on recent occasions. As discussed in our special issue “Health Wars” (September/October 2019), NGS has published in the past decade at least six newsstand books or “book-azines” on medicinal herbs and natural healing remedies that fail to meet scientific standards. And in “Whither National Geographic?” (January/February 2020), Editor Kendrick Frazier suggests that while National Geographic magazine still seems to exhibit high editorial standards, the company’s book division might not.

Now comes another such NGS publication, Science of the Supernatural: Dare to Discover the Truth, by Daniel S. Levy (2019). This time, there is an effort to give the proverbial “both sides” of controversial topics such as psychic phenomena and witchcraft. Of course, showing two sides where only one is scientific is not the way to “discover the truth,” as we soon see.

The book divides into four sections, with chapter one treating “Faith, Magic & the Miraculous.” This includes such a wide variety of topics that it lumps Uri Geller’s pretend psychic powers with “miraculous” healings, astrology, and several other topics. However, while it sometimes attempts to offer some science-based arguments for them, it often also tries to balance those with some speculative fantasy, revealingly referring to “this era of cold science and rational technology.”

In discussing supposedly miraculous healings, for example, Levy considers the healing spring water shrine at Lourdes in France. There in 1858, the Virgin Mary appeared to fourteen-year-old Bernadette Soubirous, and ever since the Catholic Church has certified alleged cures there. Citing the latest one, that of a nun who visited Lourdes, Levy reports how, later in her room, she took off her leg braces and “could immediately walk.” He does cite the placebo effect, whereby people believe some treatment is beneficiary and thereby “their mind directs their body to repair itself.” But readers are left wondering at the immediacy of the cure. Doctors reportedly could not explain what happened, and so the Church certified another “miracle.”

Readers must understand that miracle is not a scientific term. Its definition as that which cannot be explained by science relies on the logical fallacy of “an argument from ignorance”; one cannot conclude that because the cause is unknown, the effect must have been supernatural. Readers should also be told that important information has been withheld: the nun actually could walk, just in a limited capacity. We may suspect that her body had, over time, already effectively healed itself, and that came to be discovered. Other “cures” may be attributable to misdiagnosis, psychosomatic conditions, prior medical treatment, and other effects, including (in the case of certain illnesses such as multiple sclerosis) spontaneous remission. As to the Lourdes visionary, St. Bernadette herself, she is a study in irony; the supposedly curative power of Lourdes escaped her: she was bedridden for the last years of her life and died young at thirty-five.

Again, in discussing the alleged “Sixth Sense,” Levy commendably introduces James Randi, “a founding member of the Committee for Skeptical Inquiry,” whose million-dollar challenge to psychic claimants went forever unclaimed. But then we are presented with a CIA Project Stargate test of Uri Geller who seems impossibly to have triumphed!

Alas, the author does not reveal that the tests were done by the notoriously credulous parapsychologists at Stanford Research Institute where mentalist Geller was allowed great laxity of controls, and his assistant was permitted to be, as Randi himself tells us, “constantly underfoot”! Without alerting readers to the revealing account from Randi’s classic book The Truth about Uri Geller (1982, 30–54), Levy’s selective reporting misleads the casual reader.

For some topics, the provide-both-sides rule is suspended, with astrology, charms, and other superstitions essentially given a free pass. Yet while chapter two, “The World of Witchcraft,” rails against the inquisitors who tortured suspected witches, Levy can’t help but offer the view that “Today witchcraft has evolved into an open set of beliefs involving goddess worship and honoring nature.”

Be that as it may, chapter three presents new problems, because it lumps together “Vampires, Ghosts & More,” under the heading “The Undead.” The first problem is a two-page spread picturing an alleged “Vampire-Killing Kit” from 1840. However, these kits are notorious fakes—improvised from period boxes with partitions added for the assembled accouterments plus fake labels (as I show in my book Tracking the Man-Beasts, 2011, 125–129). Even the idea of such kits awaited Bram Stoker’s Dracula of 1897.

Although Levy treats vampires skeptically, blaming the myth on diseases such as porphyria and “consumption,” he leads with a case that begs for explanation—especially because it “helped spark a vampire craze throughout Germany, France, and England.” That is the 1725 case of one Peter Plogojowitz, who clearly appeared on nights after his death, provoking his fellow Serbian villagers to exhume, stake, and burn his body, which showed signs of apparent vampirism. His seemingly paranormal appearances to others were almost certainly due to their experiencing the phenomenon of “waking dreams,” realistic hallucinations that occur in the state between wakefulness and sleep. A plague, rumor, and vampire belief did the rest (see my Entities [1995], 236).

In the segment on “Ghosts and Poltergeists,” author Levy continues the presenting-both-sides approach. Of ghosts, he acknowledges at the outset “there is no real scientific evidence of their existence,” and he even follows up by mentioning how “settling houses” can “simply mimic the sound of otherworldly footsteps.” Still, he gives a plug to the “paranormal tours” at the Stanley Hotel in the Rocky Mountains that inspired Stephen King’s 1977 horror novel The Shining, as well as to the “ghost tours” of the R.M.S. Queen Mary (docked at Long Beach, California), where one might see among the plentiful spirits the resident “lady in white.” Unfortunately, missing elements include explanations for apparitions, ghostly photographs, or the true nature of most poltergeist phenomena.

Finally, with chapter four’s “Signs of the Otherworldly” comes the question of extraterrestrial life. Here, breezily mixed together, are the Roswell crash, Project Blue Book’s UFO study, alien abductees, SETI, cinematic offerings such as E.T., Peru’s Nazca lines, and more. Once again, information is given in hit-and-miss fashion—as in opportunities missed to enlighten readers. Omitted is any evidence of hoaxing regarding the McMinnville, Oregon, UFO photos (one of which is shown); ditto the picture of an English crop circle, the caption of which rather astonishingly states, “It is unclear who, or what, has fashioned such creations.”

Of course, matters could have been even worse, but Science of the Supernatural fails to live up to the promise implied by its subtitle: “Dare to Discover the Truth.” One must hear therein an echo of Jack Nicholson’s character in A Few Good Men: “The truth! You can’t handle the truth!” For here, in a slick, colorfully illustrated book-azine, is the disappointing attempt to force science to share legitimacy with its polar opposite, the imaginary realm of the supernatural. It is a cynical compromise that ignores critical facts leading to an enlightened view. However much some wish otherwise, we live entirely in a real and natural world.