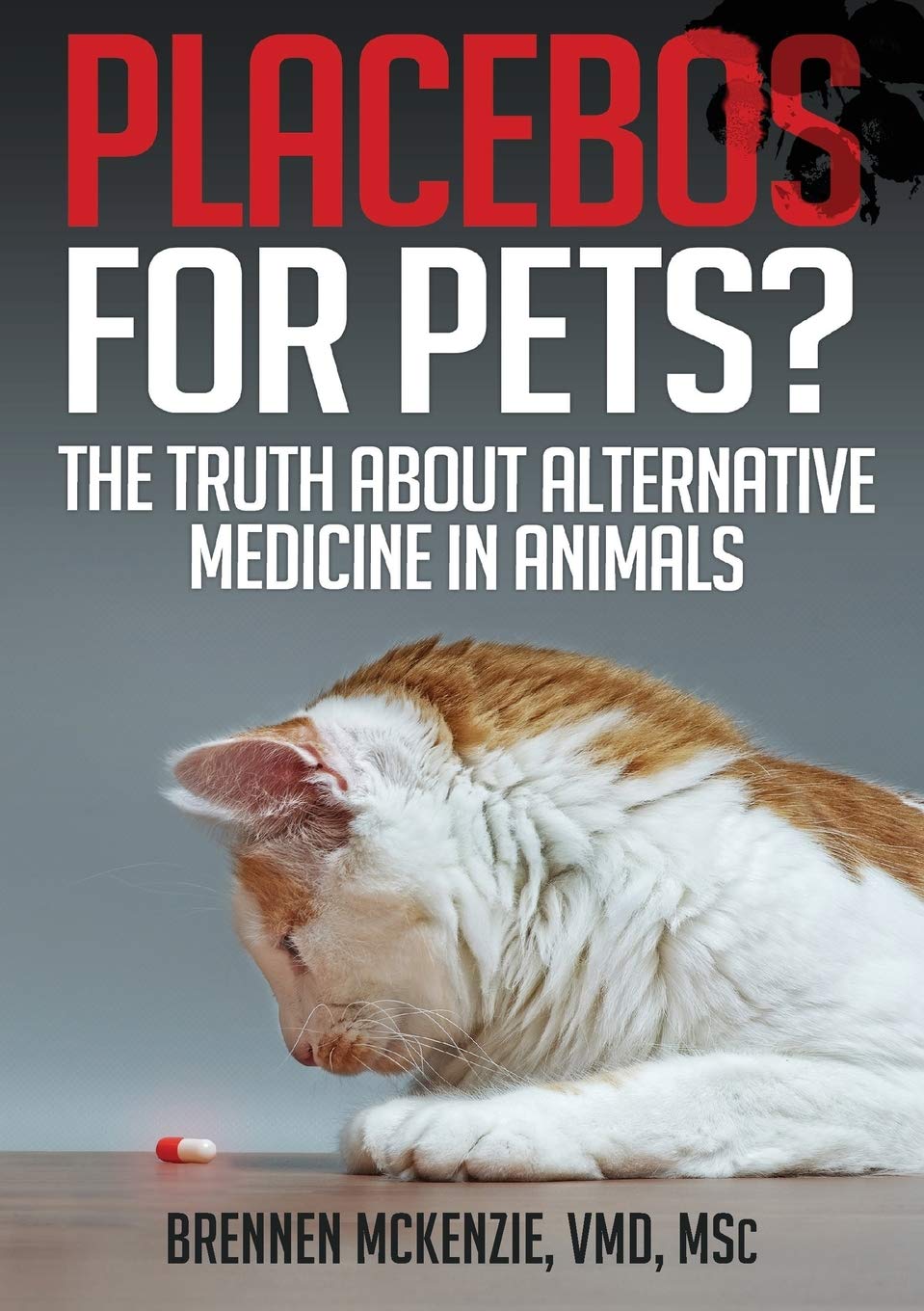 Animal and human medicine are the same yet different. They both rely on scientific evidence, build on the same basic science, study the same subjects—such as anatomy and physiology—and have much more in common. But humans are not rats (even though some people have been known to call others rats—usually with the addition of the word dirty). And all animals are not the same. What cures an elephant might kill a bunny. Aspirin causes congenital defects in mice, but not in humans. Horses don’t have gallbladders. It is not valid to extrapolate findings from studies in one species to another species.

Human and veterinary science are interdependent. Animal studies frequently precede human clinical studies; they can provide valuable information but not reliable clinical guidance. Veterinarians are forced to rely on human studies, because they are more plentiful, and few or no studies may have been done on the species they want to treat.

McKenzie has written for Science-Based Medicine, and he tries to do for animals what the SBM website tries to do for humans—not only does he provide science-based evaluations of treatments and claims, but he teaches readers the principles of science to help them learn to do their own critical evaluations of claims. McKenzie points out that veterinarians spend as much, if not more, time interacting with people as with animals. That reminds me of a pediatrician I once knew who said that good pediatrics consists of benign neglect of children and emotional support of parents. Dogs and cats can’t read this book, but their owners can learn from it—if they are willing.

But some pet owners will refuse to learn. McKenzie relates an encounter with a client who was sure her dog’s pain had almost completely gone away with homeopathy and acupuncture. When he pointed out that the dog couldn’t bear weight on his leg and cried out when it was touched, the owner became angry. Another client believed an energy healer’s diagnosis that her dog’s cough was due to leukemia. All tests were negative, and the cough resolved with antibiotics. The client refused to believe that the healer could have been wrong. She was convinced that the healer had correctly diagnosed leukemia before it could show up on any tests, and then had cured it with homeopathy.

Beliefs such as these can directly harm animals.

McKenzie lays a strong foundation by explaining how only science can give us reliable answers and how complementary and alternative medicine (CAM) relies on anecdote, philosophy, and belief systems rather than on credible, reality-based scientific studies. He explains how pet owners are misled by metaphysical beliefs. Some CAM vets claim that we can influence the world by our thoughts and that we can cause disease in our pets with our thoughts and feelings. They say the physical aspects of illness are secondary—if they matter at all. They believe that to be effective, practitioners must create a healing state with their own energy fields. McKenzie rejects such nonsense; his methods are firmly grounded in reality.

McKenzie covers homeopathy, acupuncture, manual therapies such as chiropractic and massage, herbal medicine (the most promising but also the most potentially dangerous CAM), dietary supplements, and alternative nutrition. Then he devotes another chapter to various other CAM practices such as aromatherapy, colloidal silver, cold/low level laser therapy, cupping, and many others. One that was new to me but apparently enjoys widespread use in veterinary circles is Yunnan Baiyao. The research on this herbal remedy is mostly negative, and it’s not clear that it’s safe.

McKenzie debunks a number of myths about nutrition, raw diets, GMOs, etc., and quips that while cats thrive on a diet of raw mice, he doesn’t recommend it for readers of his book! He provides a handy visual aid to determine if your cat or dog is at, below, or above a healthy weight. The book is plentifully illustrated, and some of these I got a kick out of: a deluded chiropractor leaning on a horse’s back in the belief that she is “adjusting” its spinal subluxations, a dog wearing multiple acupuncture needles in its butt, and a grumpy cat being subjected to cold laser therapy.

McKenzie provides a new slant on some old issues. He points out that a low-carb diet means a high-fat and/or high-protein diet. No one provides truly “holistic” medicine that addresses everything about a patient. So-called holistic vets only address the things they think are important. “Natural”? “There is virtually nothing in medicine that doesn’t involve some effort or alteration of natural materials by humans.” Naturopathy? It has little real substance. McKenzie also says the concept of detox “freely mixes bits of reality and science with unproven assumptions and outright myth to create a ‘toxic’ brew that can mislead us into irrational or inappropriate use of herbal medicines.”

He asks the same three simple questions of any treatment, whether alternative or mainstream: What is it? Does it work? Is it safe?

He offers his eponymous McKenzie’s Law: if it has no side effects, it isn’t doing anything. He points out that a treatment that is claimed effective for many diverse conditions probably isn’t really effective for any of them. He offers a “bottom line” conclusion for each remedy he covers. He says homeopathy is based on ideas that are not compatible with established scientific principles. Although he is trained in acupuncture and practices it, he calls it “mostly a placebo.” (He offers it only after educating clients and getting truly informed consent; he knows placebos can make animals feel better but don’t actually improve their health). His language is circumspect, nuanced, and generally polite, but he doesn’t hesitate to call Reiki “complete nonsense.” People say animals don’t respond to placebos, but they don’t need to. Their owners respond for them, and he explains in great detail how that can happen.

The discussion of the evidence for the pros and cons of neutering dogs and cats was thorough and enlightening. I knew horses don’t have gallbladders, but now I understand the acupuncturists’ (faulty) rationale for sticking needles into a horse’s gallbladder meridian (it is not a physical entity but a metaphysical concept!). Despite their exclusively bamboo diet, giant pandas are carnivores. Dogs and cats don’t need carbohydrates, but they can use them perfectly well as a source of calories. Eating grass is a normal behavior, not an attempt to self-medicate.

I highly recommend this book. It’s well worth reading even if you don’t have a pet. It is well written and easy to read, with clear explanations provided in a conversational tone. McKenzie is respectful of most questionable treatments and describes the positive research findings, although he does point out their failings. He provides exhaustive references, including all the classic skeptical articles and books as well as all the pertinent studies published in both the medical and veterinary literature. It’s a useful compendium of information on alternative medicine for animals, and it teaches readers how to figure out for themselves whether they can believe a new health claim.

If pet psychics really had access to animal thoughts, they might tell you the dogs, cats, and other companion animals of the world are grateful and would like to thank the author. I once played a pet psychic in a role-playing exercise (it was great fun and easy to make stuff up. “Fluffy tells me she loves you, and sitting in your lap reminds her of her mother—and the more expensive brand of food tastes better—and she wants you to buy this book!”). Since I know animals can’t read or speak for themselves, I will speak out for them: Thank you, Brennen McKenzie, for this book and for all your hard work and clear thinking!

This review was previously published on the Science-Based Medicine blog.


Placebos for Pets? The Truth about Alternative Medicine in Animals. By Brennen McKenzie, VMD, MSc. Ockham Publishing, 2019, ISBN: 978-1-9212701-36-0. 481 pp., Softcover, $17.99.   Alternative medicine is accepted by many humans, but we may forget that it is also imposed on their pets. Veterinarian Brennen McKenzie has done cats and dogs everywhere a great …