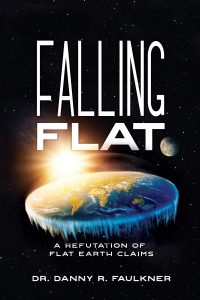 A fifth of the way into the twenty-first century, it is hard to believe that flat-earthers are still around. Faced with assertions of flat-earth belief by figures from the athletic and entertainment worlds, it might be tempting to dismiss them as insincere or aimed at getting attention. Yet there are credible polls indicating that the level of acceptance of flat-earthery is about 1 percent in the United States, Britain, and the Netherlands—and possibly even higher in France and Brazil. And the phenomenon of flat-earth conferences suggests a degree of sincerity: someone who spends $1,000 to attend such a conference presumably is not doing so ironically or frivolously.

Danny R. Faulkner’s announced ambition in Falling Flat is “to provide answers for people who, when confronted with arguments that the earth is flat, may not know how to respond” (8). Accordingly, a good portion of the book—seven of its thirteen chapters—reviews the abundant scientific evidence against the idea that the earth is flat. (Indeed, the running head throughout the book erroneously renders its subtitle as “A Scientific Refutation of Flat Earth Claims.”) Reasonably enough, Faulkner concentrates on what might be called “mainstream flat-earthery,” according to which the earth is a finite flat disk, to the exclusion of the more recherché variants.

In these chapters, Faulkner, who earned his PhD in astronomy from Indiana University and taught for a quarter of a century at the University of South Carolina’s satellite campus in Lancaster, offers a competent review of the science, discussing observations of the curvature of Earth and the evidence afforded by eclipses, the positions of astronomical bodies in the sky, observational astronomy, and Newtonian physics. The mathematics involved is generally trigonometry at the high school level, with a smattering of differential calculus. Though a little dry overall, the treatment is enlivened by Faulkner’s relating his face-to-face encounters with flat-earthers and his do-it-yourself experiments.

Falling Flat is weaker on history, however. Relying on Jeffrey Burton Russell’s Inventing the Flat Earth (1991), Faulkner emphasizes the fact that the ancient Greeks accepted the sphericality of Earth by the time of Aristotle and that—contrary to a myth promulgated in the nineteenth century—most scholars in Europe never lost sight of that through the Middle Ages and into the Renaissance. But he never cites the leading history of the flat-earth movement itself—Christine Garwood’s invaluable Flat Earth (2007)—and, as he recently acknowledged, he did not even bother to read it until after the publication of his own book.

Particularly egregious is Faulkner’s treatment of the polymath William Whewell, accused of perpetrating the idea—indeed, “the lie”—that the church fathers and the medieval church generally thought that the earth was flat (36, 39). True, in his History of the Inductive Sciences (1837), Whewell noted the existence of three obscure Christian scholars—Lactantius, Cosmas Indicopleustes, and Tostado—who allegedly were flat-earthers. (He was not the first to cite these particular scholars; James Bell did so in print in 1829.) But Whewell also emphasized that “all astronomers” after the ancient Greeks adopted “the doctrine of the globular form of the earth.” Did Faulkner actually read Whewell’s book?

Worse, Faulkner peddles a conspiracy theory about the flat-earth movement, suggesting that in both its Victorian and modern incarnations, the aim was to discredit the Bible and Christianity. In so doing, he neglects the fact that for a century and a half, the leading figures of flat-earthery not only identified themselves as Bible-believing Christians but also cited verses from the Bible in the service of their flat-earth belief. The seminal Victorian flat-earther Parallax insisted, “To say that the Scriptures were not intended to teach science truthfully, is in substance to declare that God himself has stated, and commissioned His prophets to teach things which are utterly false.”

Why is Faulkner unwilling to credit the sincere biblical underpinnings of flat-earthery? Because he shares the underlying view that the Bible is without error in what it teaches, even about matters of science. Faulkner is in fact a young-earth creationist, who currently serves as editor-in-chief of Creation Research Society Quarterly (published by a society that insists “the account of origins in Genesis is a factual presentation of simple historical truths”) and works for the creationist ministry Answers in Genesis (which includes a similar characterization of Genesis in its statement of faith). Flat-earthers such as Parallax threaten to present a reductio ad absurdum of biblical inerrantism.

Thus three chapters of Falling Flat are devoted to contending that the various texts commonly adduced in evidence of the Bible’s commitment to a flat earth are figurative, misinterpreted, inconclusive, or (in the case of those from the apocryphal book of Enoch) not in the Bible at all. Here Faulkner is no longer in his area of competence (although, in light of the creationist tendency to reject mainstream biblical scholarship, he would presumably not be impressed by the criticism). And his conclusion—“Clearly, the Bible does not teach that the earth is flat” (337, emphasis in original)—is obviously foreordained. These chapters are not likely to be of general interest.

Today’s flat-earthers, while relying on the arguments of their Victorian predecessors, are not so clearly committed to the inerrancy of the Bible. Instead, as Faulkner observes, they appear to have succumbed to a proclivity to conspiracism, abetted and intensified by the internet. But the diminished emphasis on the inerrancy of the Bible among flat-earthers ought to be of no comfort to Faulkner, because biblical inerrantism is on the decline anyway. In a Gallup poll conducted in 2017, fewer than one in four Americans agreed that “the Bible is the actual word of God, and is to be taken literally, word for word” comes closest to describing their views about the Bible: a record low.