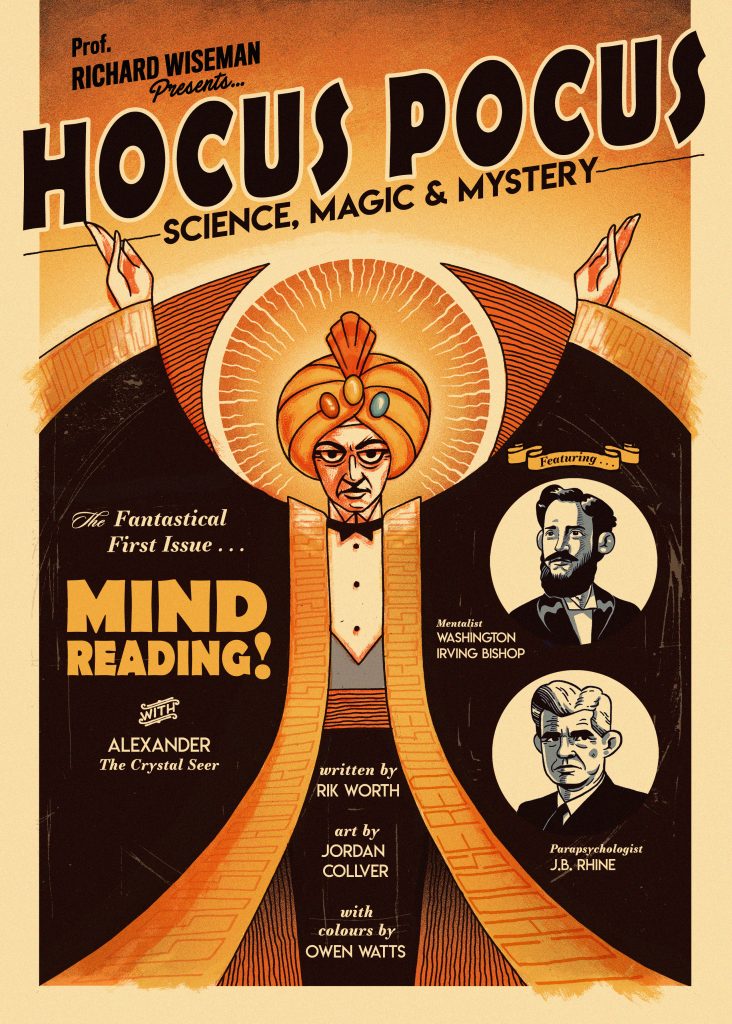 From popular books to public lectures, television shows to radio programs, and magazine articles to blogs, skeptics have worked hard to promote critical thinking about the paranormal. However—perhaps surprisingly—they have tended not to use one of the most visual, immersive, popular, and entertaining forms of storytelling.

Several years ago, I teamed up with illustrator Jordan Collver and writer Rik Worth to create some novel and eye-catching optical illusions for my Quirkology YouTube channel. Collver and Worth specialize in using graphic art and comics to help communicate science, and I suggested that the three of us produce a comic that promotes skepticism and critical thinking. They were open to the idea, and we started to discuss how it might work.

We knew that the paranormal has broad appeal, and so we decided to create a comic that focused on seemingly impossible phenomena, such as psychics, ghosts, prophesy, reincarnation, mediums, and the like. However (unlike many other magazines about the paranormal) our comic was designed to present a much more rational and skeptical approach to these topics.

We decided to call the comic Hocus Pocus and dedicate our first issue to mind reading. In one story, readers travel back in time and meet the Victorian performer and mind reader Washington Irving Bishop. During his shows, Bishop invited a spectator to hide an object somewhere in the venue. Next, he held onto the spectator’s hand or wrist, asked the spectator to think of the secret location, and then led the spectator to the object. In 1889, Bishop appeared to fall into a coma during a performance in New York City and die. The following day, physicians performed an autopsy on Bishop in the hope of studying his seemingly remarkable brain. Unfortunately, Bishop apparently suffered from cataleptic fits and carried a card on him stating that nobody should carry out an autopsy on him until at least forty-eight hours after his apparent death. Our magazine tells Bishop’s remarkable story and explains how his seemingly inexplicable performances involved him detecting tiny unconscious movements (known as ideomotor actions) made by the spectator.

Another story focuses on the pioneer of parapsychology, Joseph Banks Rhine. Readers discover how Rhine was convinced that the results of his research supported the existence of extrasensory perception (ESP), but that skeptics have argued that Rhine’s experiments were often poorly designed. The third and final story concerns a 1920s conman and conjurer named Alexander. Billed enigmatically as “The Man Who Knows,” Alexander stood onstage and appeared to be able to mysteriously divine the innermost secrets of audience members. In reality, Alexander had several ways of discovering the information, including incorporating secret listening devices into the mirrors in the theater restrooms! Once again, Alexander’s story is brought to life in a colorful and dramatic way, and readers learn about the psychology used to fake psychic readings. 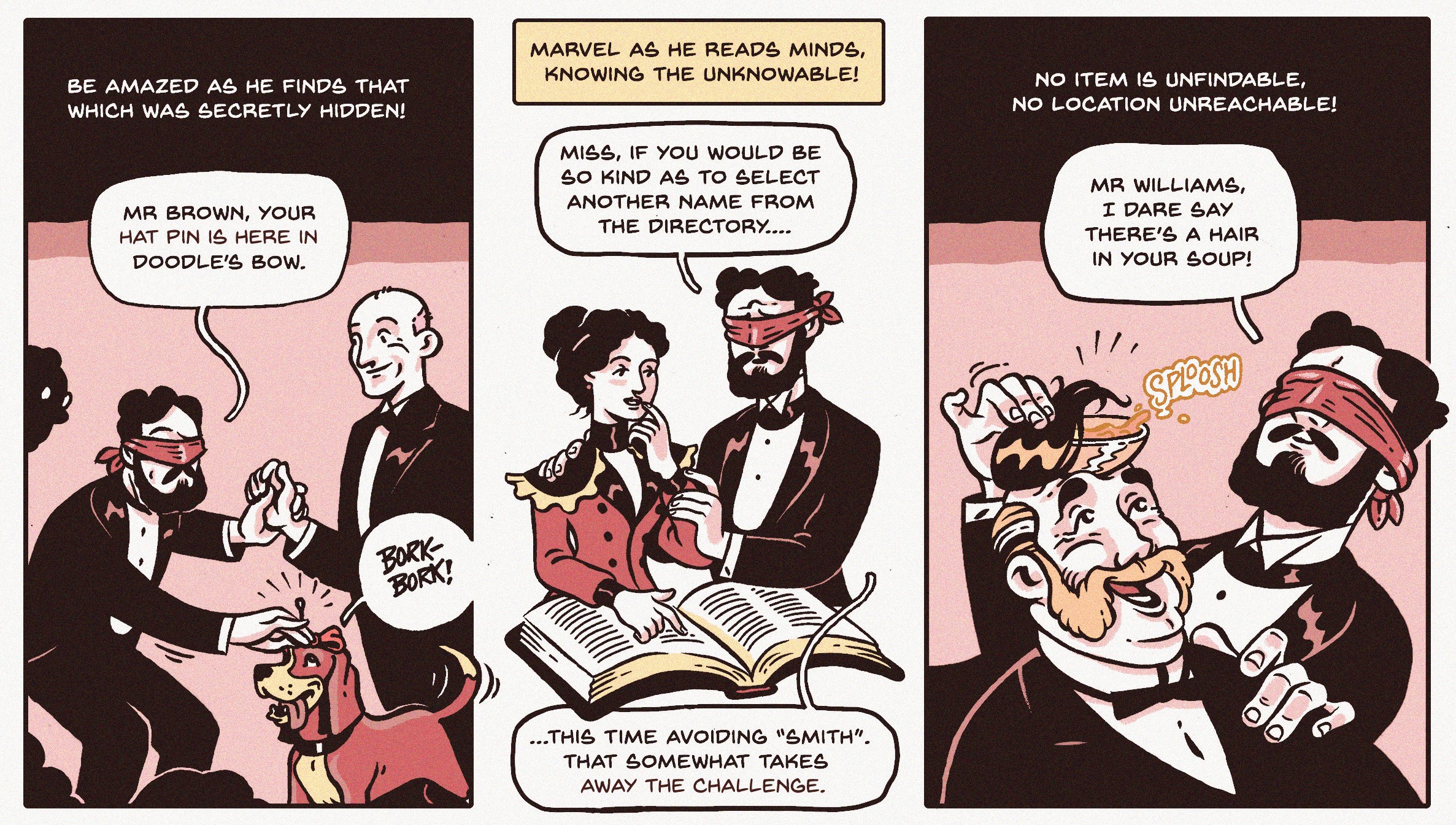 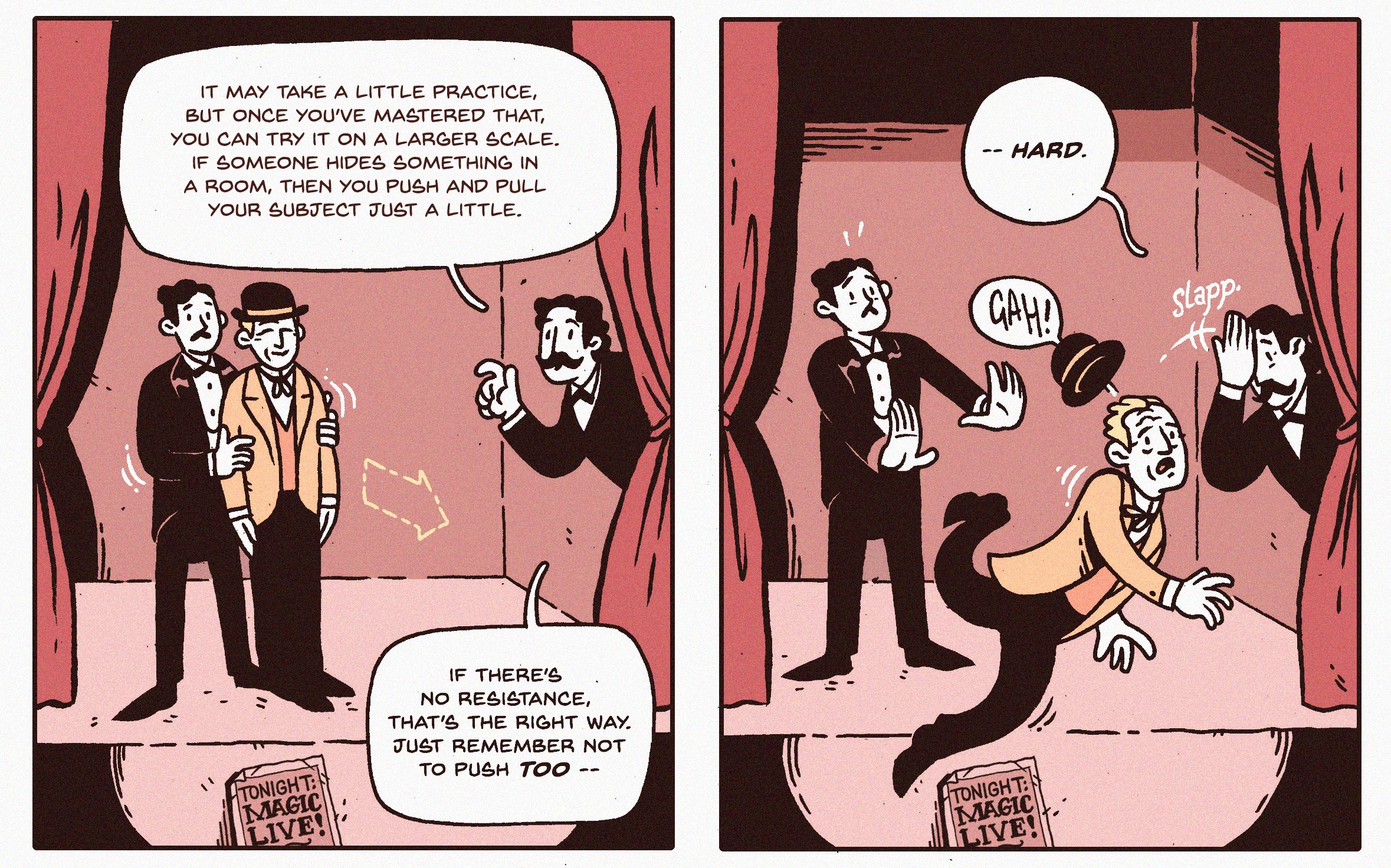 Research shows that both watching and performing magic tricks can boost curiosity and engagement (Wiseman and Watt 2018; Wiseman and Watt 2020). As a result, we are eager to make the comic as interactive as possible, and we have scattered tricks, illusions, and demonstrations throughout the first issue of Hocus Pocus. For instance, readers are shown a simple way of detecting ideomotor actions, are invited to test Bishop’s powers of deduction, receive a psychic reading from Alexander, and take part in an experiment conducted by Rhine. We have also produced a free downloadable booklet for those wishing to use the comic for teaching or to delve deeper into the topic. This booklet contains additional information about the stories and further explains the psychology and science behind the various phenomena. 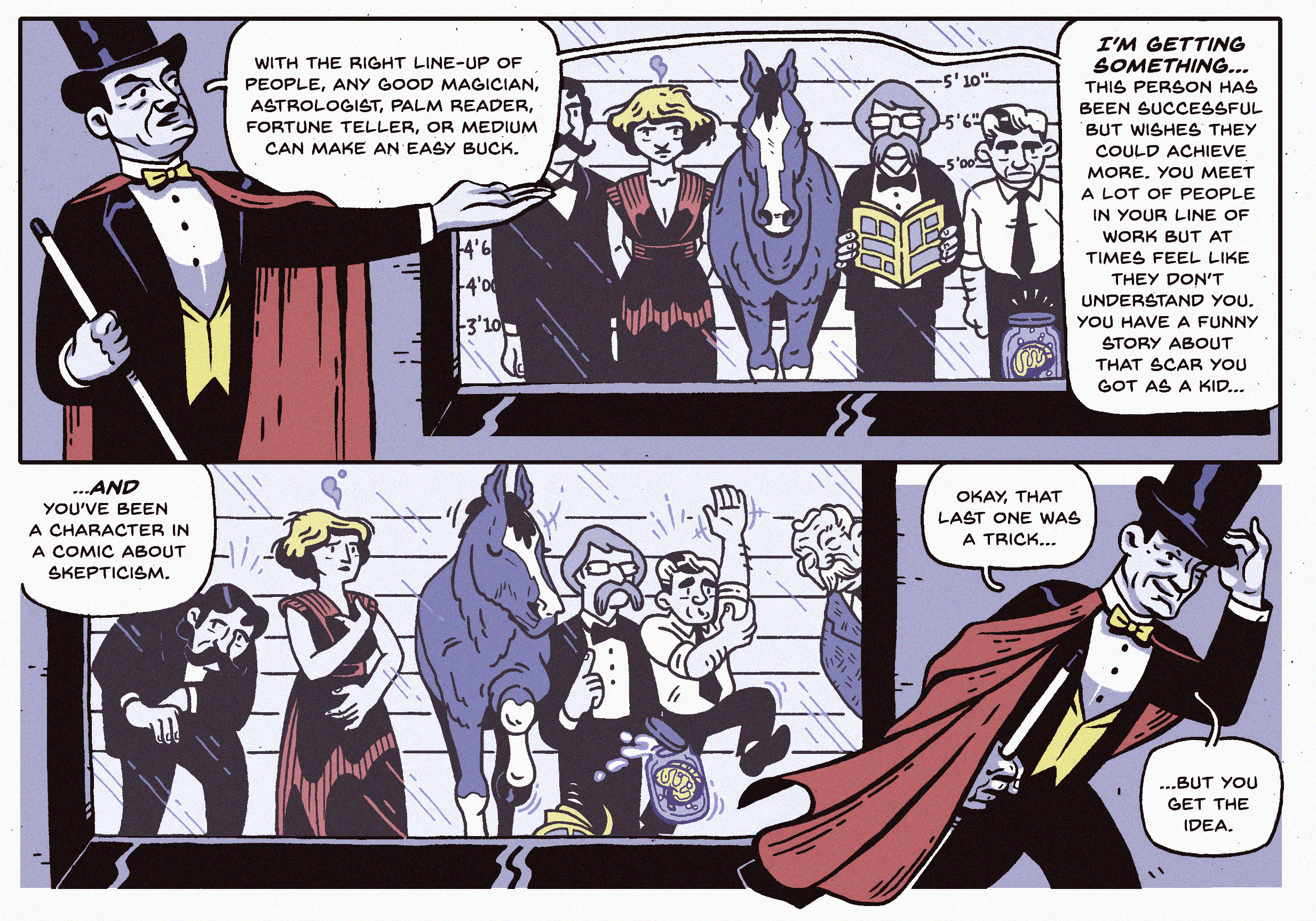 We are not the first to produce a skeptical comic. In the late 1940s and 1950s, magician Bill Neff appeared in a series of comics exposing various psychic scams and techniques. For instance, in the comic Ghost Breakers, Neff debunks spirit table levitation, explains some mind reading stunts, and presents an optical illusion that gives the reader the impression of seeing a ghost. Similarly, in the comic Racket Squad in Action, Neff exposes several scams used by fake mediums and psychics to fleece unwitting sitters. Both of these comics proved highly popular, and we hope that Hocus Pocus will follow in Neff’s footsteps.

Our comic was launched in early 2020 and has already been positively received, with one reviewer describing it as “an utterly magical read” and “one of the most inventive and gorgeous comics we have read this year.” There are more issues on the way, and each will present a skeptical take on seemingly paranormal phenomena. Comics are very visual, highly immersive, and entertaining. As a result, they appeal to a wide range of ages and attract diverse audiences. In addition, several studies suggest that comics are an engaging way of communicating science and mathematics (Farinella 2018).

Comics are currently enjoying a huge surge in popularity, and we are now using this wonderful form of visual storytelling to encourage a skeptical stance toward the paranormal. The first issue of Hocus Pocus is available to download for free at www.hocuspocuscomic.com, and print copies are available there too.

Richard Wiseman is Professor of the Public Understanding of Psychology at the University of Hertfordshire in the U.K. He is a fellow of the Committee for Skeptical Inquiry and a Skeptical Inquirer consulting editor. For more information about his work, visit richardwiseman.com.