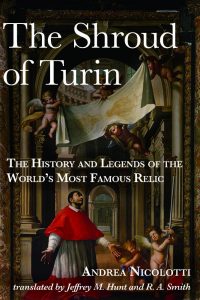 The Shroud of Turin: The History and Legends of the World’s Most Famous Relic. By Andrea Nicolotti. Waco, Texas: Baylor University Press, 2020. 523 pp. Hardcover, $59.95.

The remarkable thing about the Shroud of Turin is that it started out as merely a painting but ended up being treated as a relic—namely a piece of cloth bearing an imprint of Jesus’s dead body.

Church historian Andrea Nicolotti’s tome on the history of the Shroud is a magnificent book with a wealth of interesting and thoroughly researched details. The original Italian edition was quite rightfully awarded two prizes and is recommended by colleague historians. It’s not Nicolotti’s first publication on the subject. In the past ten years, he has published about two dozen scholarly articles and books on the Shroud.

The Shroud, a piece of linen of about four by fifteen feet with a picture of a tortured man’s front and back on it, first turned up shortly around 1355, when it was immediately recognized as a lucrative fraud. In 1389 it resurfaced, and bishop Pierre d’Arcis complained about the fraud to the pope, referencing the investigations of his predecessor. That’s the very first historical mention of the Shroud: as a fake. Nicolotti tells the history in great detail and explains that there were at least forty shroud relics in those centuries.

There is a lot of correspondence in the first century of the Shroud’s existence, altogether about fifty documents. Ownership of the Shroud and the right to exhibit it were fiercely contested. Remarkably, none of the parties concerned ever claimed that it was a genuine relic. In 1453 Louis, Duke of Savoy, acquired the shroud (although fenced would be a better word).

The origins were quickly forgotten, and the House of Savoy enjoyed being the possessor of a powerful relic. From 1578 onward, the Shroud was kept in Turin, the seat of the House of Savoy. In that time, it was frequently exhibited for large crowds. It was also copied, and the copies were themselves copied, and so on.

Then in 1898, the Shroud was photographed during a large exhibition. The photographer noticed that the negative looked very lifelike. The miracles of modern technique eliminated all doubts about the authenticity. This was reason for Canon Ulysse Chevalier, a very accomplished historian and truly Nicolotti’s hero, to investigate the matter. He found the fifty documents mentioned above and concluded that the Shroud was just a medieval painting. Many Shroud fans were very angry. Just when a secret papal committee concluded that Chevalier was right, his superiors forbade him to publish anything more on the subject. Others came to the same conclusion, but such results were kept secret, and it seems clear why: exhibitions of the Shroud are very lucrative.

Not only do the documents prove its medieval origin, but the cloth itself is a herringbone weave with Z-twist yarn. This points to a medieval origin in Western Europe. This is already mentioned in a book by Ian Wilson on the topic, but Nicolotti has meticulously established that the testimony of the textile is quite strong. The Shroud has been examined physically in great detail (Walter McCrone’s book Judgment Day for the Turin Shroud is excellent), but Nicolotti pays most attention to the radiocarbon tests of 1988. They were conducted by three distinguished radiocarbon dating scientific laboratories in Tucson, Oxford, and Zurich. The first meeting about this test was in 1986. The participants could not agree on anything, and the typewritten verbatim record of the meeting ran to 700 pages! Finally, the test results were published in Nature, the world’s leading multidisciplinary scientific journal (vol. 337, 611–715, February 6, 1989), concluding that the period 1260–1390 CE had a 95 percent chance that it contained the Shroud date. Just as expected.

The believers didn’t accept this, offering various rationalizations such as the pollution theory. The Shroud was a bit damaged in a fire of 1532. But if pollution in 1532 with then-modern carbon takes off 88 percent of its age (as claimed), then the pollution must be about 88 percent of the mass of the total, which is impossible. Moreover, labs that do C14 dating routinely clean the samples very thoroughly.

Another “explanation” is that scientists are all atheists, hence liars. Several outrageous theories postulate nuclear reactions that accompanied the Resurrection. Both the image and the carbon rejuvenation are taken care of in one fell swoop. Remarkably, one French researcher managed (in 2017) to deduce from a piece of sticky tape of 0.001 square inches that had been in contact with the Shroud that Jesus had red hair and used a copper razor. Nicolotti has many more such interesting details as well about all the fanciful pre-1355 histories that have been concocted over the years.

Meanwhile, information about the Shroud is kept secret, and real investigators are kept at bay. The believers, or “shroudies,” organized in quite a few national societies, keep writing books and articles and holding conferences. They call themselves “sindonologists” (sindon is Greek for linen, cf. Matthew 27:59); it’s an expanding cult.

Apparently ecclesiastical authorities don’t feel that all this Shroud pseudoscience is actually an insult to a painting that in all its clumsiness might be just as inspirational as the Adoration of the Mystic Lamb in Ghent, which dates back to the same time—but which was made by a much better artist.