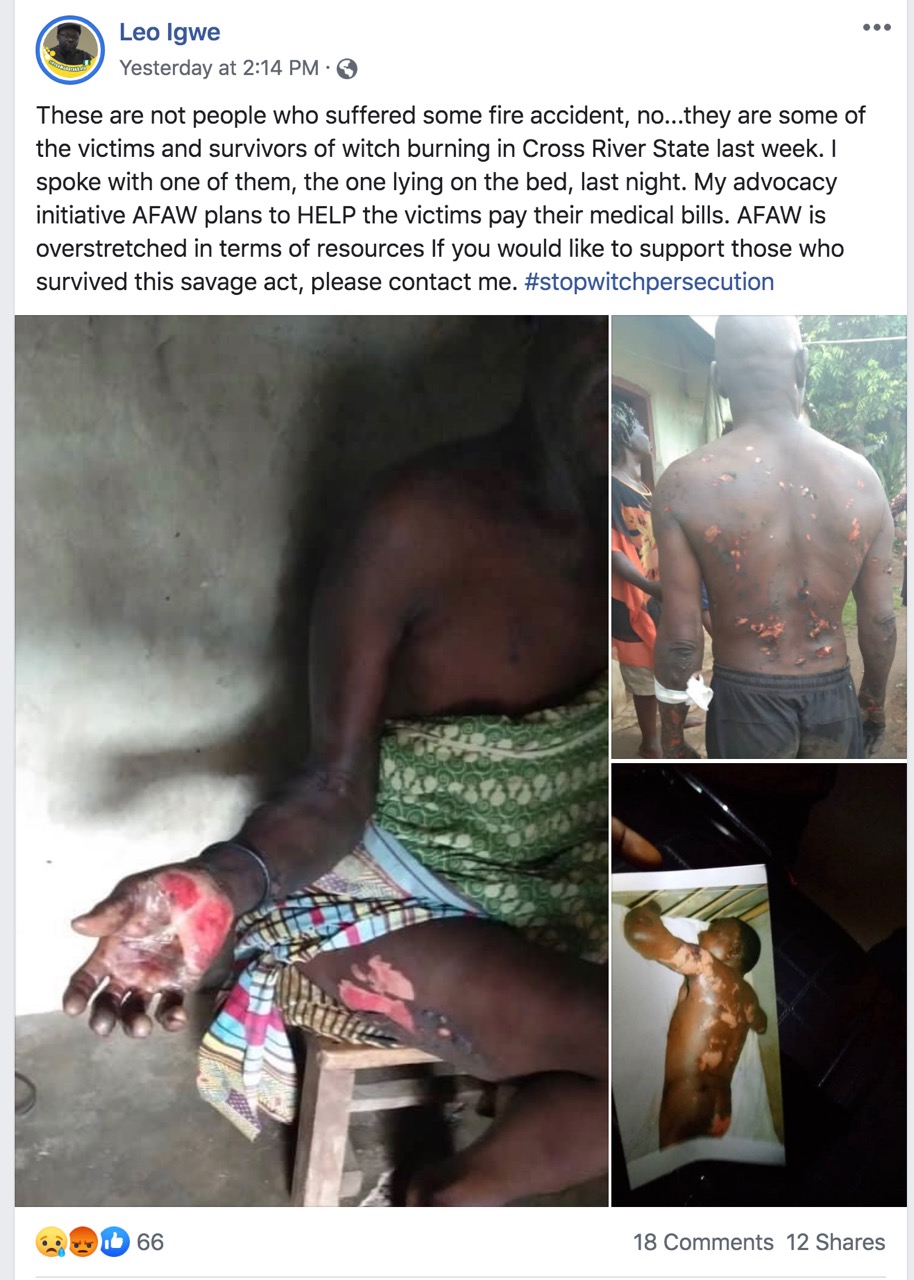 Although the burning of alleged witches is often identified with eighteenth-century Europe, this horrific violence still occurs in modern Africa. People in pre-colonial Africa used belief in witchcraft to make sense of misfortunes that defied naturalistic or commonsense explanations. Unfortunately, these ancient superstitious beliefs have neither waned nor disappeared over the years.

Colonialists tried to eradicate witch hunting and introduced legislation that prohibited witchcraft accusations. At the end of colonial rule, some African countries retained the colonial legislation against witchcraft persecutions. Other countries, however, introduced laws that formally recognized the reality of witchcraft, leading to a legal and political climate that has enabled rampant witch persecution, including recently in West Africa.

On May 19, 2020, at least fifteen people, most of them women, were set ablaze after being accused of witchcraft in Cross River State in southern Nigeria. This region is notorious for witch persecution that often targets children, though the victims in this case were adults. A local politician, Thomas Obi Tawo, masterminded the attack. Tawo, who goes by the name General Iron, is feared throughout the region and leads a local gang that terrorizes the community. Some people said that it was due to Tawo’s powerful political position that the state governor of Cross River, Benedict Ayade, appointed him special adviser on Forest Security. Despite his appointed powers, this position made Tawo increasingly insecure, due to fears and anxieties surrounding alleged occult activities.

According to local sources, the relationship between Tawo and his relatives had been strained, and he had suspected his mother and other family members of bewitching him. Tawo claimed that he saw the relatives in his dreams threatening to kill him. Last year, he confronted one of them, Chief Edward Kekong, and slapped him. In May, Tawo claimed that these family members had continued to appear and threaten him in his dreams. He complained to some of the family members, who agreed to consult some local diviners to confirm his suspicions. But Tawo claimed that he had consulted a man of God—as pastors are called in Nigeria—who validated his suspicion that his relatives wanted to harm him through witchcraft. He then decided to bring witch hunters to rid the community of these evil people.

On the day of the attack, Tawo arrived with thugs wielding machetes, clubs, and other weapons. A few of them were holding mirrors and other objects believed to identify witches. They moved from house to house, pointing out the alleged witches in the community. First, they went to the apartment of Thomas Obi Tawo’s mother; they beat her, dragged her out of the home, and threw her into a fire. Then they went to the homes of other alleged witches and wizards and meted out the same treatment. By the time it ended, at least fifteen people suspected of witchcraft were assaulted and set ablaze. For hours, members of the community watched in shock as Tawo and his lynch mob terrorized the community.

The victims sustained various injuries and burns on their faces, backs, legs, and hands. Some are unable to urinate or even sit because the fire burned their genitals and buttocks. Relatives who had the financial means took victimized family members to nearby hospitals, while the poorest nursed their wounds as best they could at home. The wounds of one female victim who could not afford hospital care became infected, and people in the community contributed resources to rush her to a hospital. Three of the victims have died, and others are still in hospitals fighting for their lives.

A police outpost exists in Boki, where the attacks took place, but the police did not intervene. A complaint has been lodged with the state police command in Calabar. The police public relations officer stated that an investigation had begun, but there seems to be no significant progress. None of those responsible for the atrocity have been arrested, and police have yet to apprehend or interrogate any suspects, including Tawo.

The Cross River state government has been indifferent to the attacks and has refused to condemn such persecutions. The government has extended no support to the victims and has not committed itself to seeking justice. Instead, the state government has been accused of undermining the investigation and trying to ensure that Thomas Obi Tawo and other alleged perpetrators are not brought to justice. The state media spokesperson had stated that no member of the government was connected with the burning of witches in Boki. Advocacy for Alleged Witches (AFAW), an organization that campaigns against witch persecution in Africa, is in touch with surviving victims and is helping defray the costs of their medical treatment. AFAW is also pressuring the police to arrest and prosecute the perpetrators and fulfill their responsibility to prevent crimes and protect citizens. Until and unless state authorities protect the lives and properties of citizens accused of witchcraft, such persecutions and killings will continue.

Leo Igwe is the founder of the Nigerian Humanist Movement and currently a research fellow at Bayreuth International Graduate School of African Studies, University of Bayreuth, Germany.


Although the burning of alleged witches is often identified with eighteenth-century Europe, this horrific violence still occurs in modern Africa. People in pre-colonial Africa used belief in witchcraft to make sense of misfortunes that defied naturalistic or commonsense explanations. Unfortunately, these ancient superstitious beliefs have neither waned nor disappeared over the years. Colonialists tried to …