A lot can happen in twelve years—even in evolution. It took just a dozen years for a population of threespine stickleback fish to evolve to lose the bulk of their armor after colonizing a freshwater lake in Alaska (Bell et al. 2004). Experimental populations of a species of wheat managed in the same amount of time to evolve flowering schedules adapted to different climates in Europe (Rhoné et al. 2010). And over 25,000 generations of E. coli evolved and were monitored in exquisite detail in Richard E. Lenski’s Long-Term Experimental Evolution Project over the course of its first twelve years (Blount et al. 2008).

It turns out that a lot can happen in twelve years in evolution education too. In a recent report published in the peer-reviewed journal Evolution: Education and Outreach, Eric Plutzer, Ann Reid, and I discuss the results of a rigorous national survey of public high school biology teachers commissioned by the National Center for Science Education (Plutzer et al. 2020). The survey, conducted in 2019, was designed to replicate a similar national survey conducted by Plutzer and his colleagues in 2007 (Berkman et al. 2008). There was a lot of change in the twelve years between the two surveys—and a lot of it was for the better.

In 2007, Eves were in the majority, but only barely so, at 51 percent. By 2019, there was a dramatic shift, with more than two-thirds of public high school biology teachers—67 percent, to be exact—reporting as Eves. The proportion of Averys, Mimis, and Craigs correspondingly decreased over those twelve years: from 18 to 15 percent for Averys, from 23 to 12 percent for Mimis, and from 8.6 to 5.6 percent for Craigs. With about four million students enrolled in high school biology classes in the public school system in any given year, the gains for accurate, complete, and honest evolution education are clearly enormous. 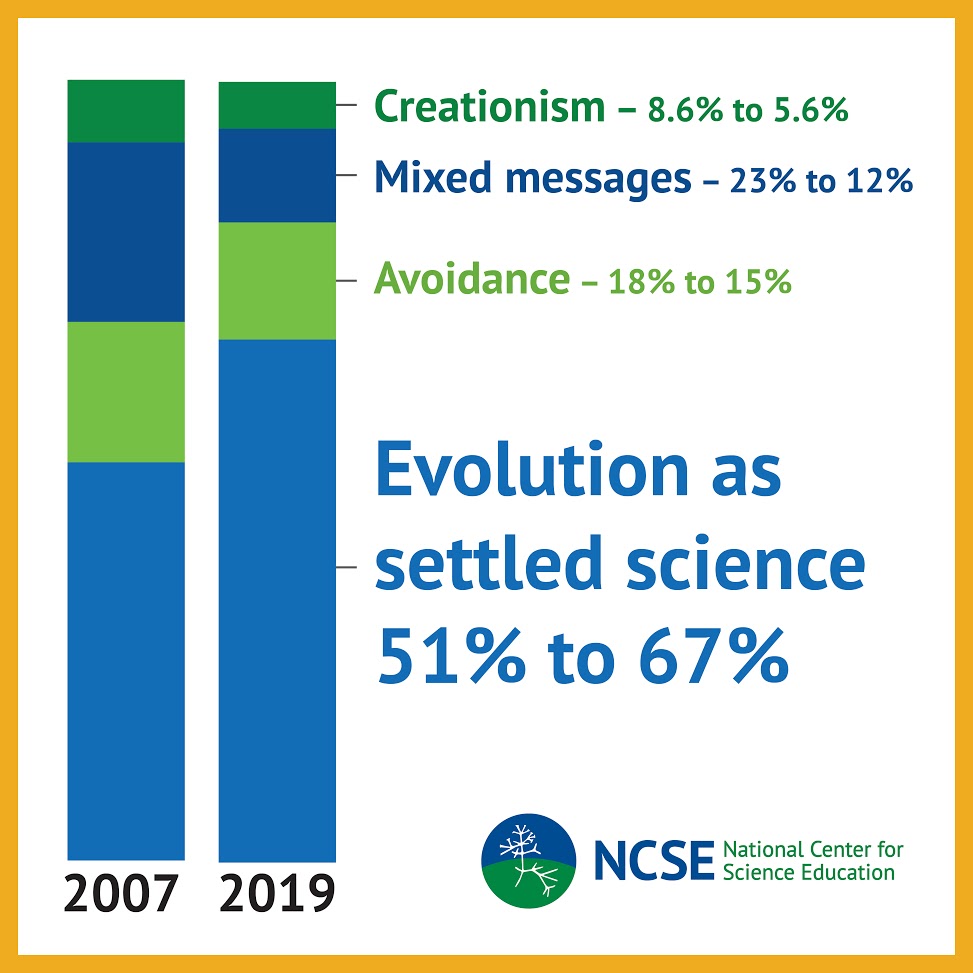 It is still a matter of concern that so many of these teachers—more than one in six, 17.6 percent—are presenting creationism as scientifically credible. Unsurprisingly, the personal religious beliefs of teachers play a large role in their choice of what themes to emphasize in the classroom. Presented with the standard options used by Gallup in its polling on evolution and creationism, 4 percent of Eves, 12 percent of Mimis, 25 percent of Averys, and a whopping 60 percent of Craigs in 2019 agreed with the creationist option, “God created human beings pretty much in their present form at one time within the last 10,000 years or so.”

Even here there is encouraging news. In the 2007 survey, 16 percent of all the teachers surveyed agreed with the creationist option when presented with the Gallup question, while in the 2019 survey, only 10.5 percent—and only 7 percent of the younger teachers who began teaching after 2007—did, suggesting that creationists are decreasingly likely to be represented among public high school biology teachers. The decrease among high school biology teachers significantly outpaces the decrease in creationism among the general public, which fell from 46 percent in 2007 to 40 percent in 2019, according to Gallup (Brenan 2019).

What accounts for such a striking improvement in the emphasis on evolution in the high school biology classroom? Part of the explanation involves the Next Generation Science Standards (NGSS Lead States 2013), the model set of state science education standards introduced in 2013, endorsed by the National Science Teaching Association (National Science Teaching Association 2016), and adopted in twenty states (plus the District of Columbia) so far. Evolution features prominently in the NGSS, which include “Biological Evolution: Unity and Diversity” as a so-called disciplinary core idea of the life sciences.

A degree of improvement was visible also in the two dozen states that adopted standards based on the same framework on which the NGSS is based (National Research Council 2012) as well as in the six remaining states (Florida, Ohio, North Carolina, Pennsylvania, Texas, and Virginia), so the NGSS is not exclusively to thank. But the evidence suggests that states that adopted standards with increased demands regarding evolution took steps to ensure that teachers acquired the content knowledge of evolution they needed to live up to those demands.

So along with the good news about the improvement in evolution education from 2007 to 2019, a moral emerges: substantial improvements in science education, even for a socially contentious topic such as evolution, are attainable by adopting a scientifically accurate and pedagogically appropriate set of state science standards and arranging to equip teachers with the wherewithal to ensure their students gain the knowledge and abilities specified by those standards. Clear and convincing gains for evolution education were so produced in just twelve years. What good news will a further dozen years of effort bring?