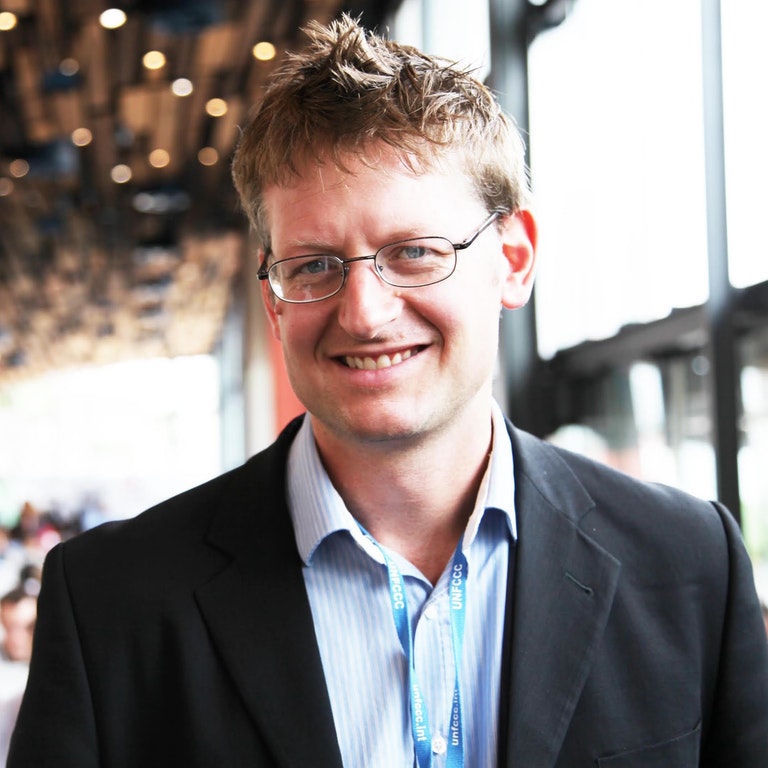 Mark Lynas is a British environmentalist who has written books on climate, nuclear energy, GMOs, and how science has changed his mind. Climate change has been featured in many of his books; his latest, Our Final Warning: Six Degrees of Climate Emergency, is a new and updated edition. It outlines what lies ahead with every added degree of warming. He was a climate change advisor to President Mohamed Nasheed of the Maldives between 2009 and 2011 and is a coauthor of An Ecomodernist Manifesto.

Lynas is a visiting fellow with the Cornell Alliance for Science at Cornell University and a fellow of the German skeptics organization GWUP. He received the Breakthrough Paradigm Award of the Breakthrough Institute in 2012. He has written for numerous publications and outlets, including the New York Times, Washington Post, Wall Street Journal, the Guardian, and CNN.

What was your motivation for writing a new edition of your book Six Degrees? What was different writing the second edition?

I received many queries asking whether my views have changed since I wrote the book and whether I have become more optimistic or pessimistic. I wanted to answer the same questions. I followed a process similar to that of the IPCC [Intergovernmental Panel on Climate Change] to gain an understanding of what has changed in the climate change arena.

The process for the second edition was easier because everything is online now. For the first edition, I had to be at the library of the University at Oxford to read papers. Also, I gained a lot of knowledge going through the process once before. I am not a bonafide expert, but I am sufficiently well versed in the science now to sift through the material more quickly.

Some critics state that too many climate scientists use RCP 8.5 for their climate projections and say RCP 6.5 or even RCP 4.5 are closer to business-as-usual. [RCPs are representative concentration pathways, greenhouse gas concentration trajectories adopted by the IPCC.] Are you too pessimistic in using RCP 8.5? You seem very optimistic at the same time. What gives you hope?

I don’t care which RCP is business-as-usual. I am interested in the temperatures. I look at what the temperature outcomes are and what the impacts associated with them are. RCP 8.5 studies are useful because they give us a good picture of moderate to high-end impacts.

But I don’t believe there is no escape. There is a lot of eco-pessimism out there. That reflects more the psychological state and the political preferences of the actors as much as anything. I am not of that persuasion—and it is not supported by the data.

We are not on the RCP 8.5 pathway if you look at our current trajectory. You’d have to do a lot of coal burning for that to happen. We are eliminating coal, and we have done this in the United Kingdom. The question is whether we get to the 1.5 or 2-degree [Celsius] targets.

In your book, you do not rule out a runaway greenhouse effect as a point of no return—ever. In your view, is that—something that happened on Venus—a real possibility?

I was interested in looking at what is the absolute worst case scenario. You often hear that the planet will survive and there will always be life and that even if humans die, the planet would bounce back. I got to thinking that that’s not right. My hunch was that if we emit enough carbon, we could feed a runaway greenhouse effect given what we know of the ancient history of Venus.

Computer models show how far you have to drive the heating process with carbon to get to what they call a “moist greenhouse.” Then you get to a continually increasing water vapor concentration in the atmosphere. That breaks down the way the atmosphere circulates to destroy the troposphere and stratosphere. Usually, the water vapor at some stage condenses back to liquid. When you stop that from happening, the water vapor increases the greenhouse effect, and the oceans boil off. Eventually, the hydrogen is dissociated and lost into space, which is probably what happened with Venus.

A runaway greenhouse effect is something that takes geological time, but it is not a desirable pathway to go down. You just have to bear in mind that we could make life on the planet extinct if we make some catastrophic decisions.

Do you see a borderline of x degrees that we have to avoid?

That is the point. There is no borderline, where on the one side you have the apocalypse and on the other side a livable planet. It is not binary like that. It is worse if it is 3.5 than if it is 3, and 2.5 is worse than 2.

I think that the 1.5/2 degree Paris targets are reasonably well supported by what we know about likely climate impacts. It will be nice to keep some semblance of the world of today. You’ve also got to worry about tipping points. I don’t want to overstate this, because it is not like you pass the tipping point next Thursday and then everything is lost. These things take decades to play out. In the Arctic, you have to melt the permafrost, and these have to release methane with its feedback into global warming. But we are pushing the planet into ever more dangerous territory over time.

How critical are you of geoengineering?

I am not in favor of stratospheric aerosol engineering, but it may be needed if we are desperate. There are always different things you can do that are technically manageable. My dislike of geoengineering reflects spiritual or qualitative preferences. I don’t think we can find a scientific argument to ban all such research. All knowledge within certain boundaries is good. The more we know about these things, the more options we have.

What is your view of the German approach with renewables only, compared to countries such as Finland, the Czech Republic, Slovakia, or the United Kingdom, who also favor nuclear energy? And what about carbon capture and storage (CCS)?

I have my personal views reflected in my book. Even when I was going through a pro-nuclear campaigning phase, I always avoided being overly skeptical about renewables because I thought there was huge potential there. Plus I wanted us to work together.

When I wrote this book, I thought I could write a line on nuclear. But I made a calculated decision not to get into the tribal technology wars. I did not want to make the book pro-nuke/anti-nuke or pro-renewable/anti-renewable. Reading it should be of equal interest to anyone who is interested and thinks that climate change is a risk.

The situation about renewables, nuclear, and carbon capture and storagechanges all the time. I try not to close doors by saying that this or the other is not going to work. What is more of a challenge now is to keep pushing forward with technology innovation and to rapidly amplify the transition to clean technologies. And I mean all clean technologies.

One of the things I did ten years ago was to work with the renewables, nuclear, and CCS people to lobby for stronger carbon targets, which was partly successful. I still think that the low-carbon people should be working together. Diversity is our friend. I don’t mind if countries want to do their own particular thing. You’ve got to get coal off the system. There are problems with large hydro, and there are problems with all sources of energy. There is no such thing as a free lunch. You have got to look at the pros and cons of each.

Do countries in the Global South have to go down the same path as the older industrial nations?

In most of these countries, solar is probably the cheapest option. If you are in capitals in Africa, you get used to blackouts. It comes down to infrastructure and development. But that development can largely be clean. You don’t have to start with huge amounts of coal to give power to people who have very little access to energy.

What do you think of the repeated discussion about mitigation versus adaptation?

This is a false dichotomy because adaptation is part of the mitigation effort as well. Some of the problems are with us today, and we have to do all that we can to save lives immediately, as well as avoid a much worse catastrophe in the future. I don’t have any problem with that. In Bangladesh and West Bengal in India, they have just had a super cyclone. There were a few dozen deaths, which of course is a tragedy. Still, it was nothing compared to what used to happen in the seventies and earlier decades before they had proper scientific forecasting, cyclone shelters, and those kinds of things that come with development. Hundreds of thousands of people would have died in these cyclones had we not had that level of adaptation, if you like.

Many activists blame climate deniers for the current state of affairs. Are we overestimating their influence?

I don’t think that denialism is such a significant factor anymore. It is an old white men thing. Take the the Global Warming Policy Foundation (GWPF). The GWPF has all publications by emeritus professors who are fading quietly into the night and want to have one last shout and get some attention and therefore do the contrarian thing. I don’t think that is politically significant.

Ecomodernists and traditional environmental groups are divided on what to do. Is cooperation between them possible?

Divides are not a bad thing per se. I believe in democracy and pluralism. Diversity is not a thing I want to eradicate. I don’t want to get people to think the same thing. I am a cosignatory and coauthor to the ecomodernist manifesto. It was not a statement like a religious gospel. It was intentionally a provocation to get people in the environmental movement to think in ways they did not before. The environmental movement is too small. It has to be everybody. You can’t solve the climate crisis unless you have willing participation from people on the right. You are not going to have a Bernie Sanders–type of regime in perpetuity, and I wouldn’t even want there to be.

You have to have enough of a cross-party consensus on the fact that we need to save the climate. That means that divisive Greens-only plans, even if they get out there and are met with much enthusiasm, won’t work. Politically, I am a bit more of a centrist. I am on the left, but I would not count myself on the far left. So maybe that’s a reflection of where I am.

Where do you see ecomodernism today?

Ecomodernism was something where I was trying to forge pro-science environmentalism. I have been very pro-genetic engineering and nuclear and things like that. I just think these debates need to be evidence-based. What infuriates me more than anything else is not the climate deniers but people who are smart, young, and informed who come out with pseudoscientific attitudes on GMOs. I find that more infuriating, because I want them to be better as environmentalists. If you pollute environmentalism with antiscience mysticism, then you have negated a potential force for good in the world. For me, that would be the most tragic thing of all. If I have a life’s work, it is to do my bit to make sure that environmentalism is informed by science.