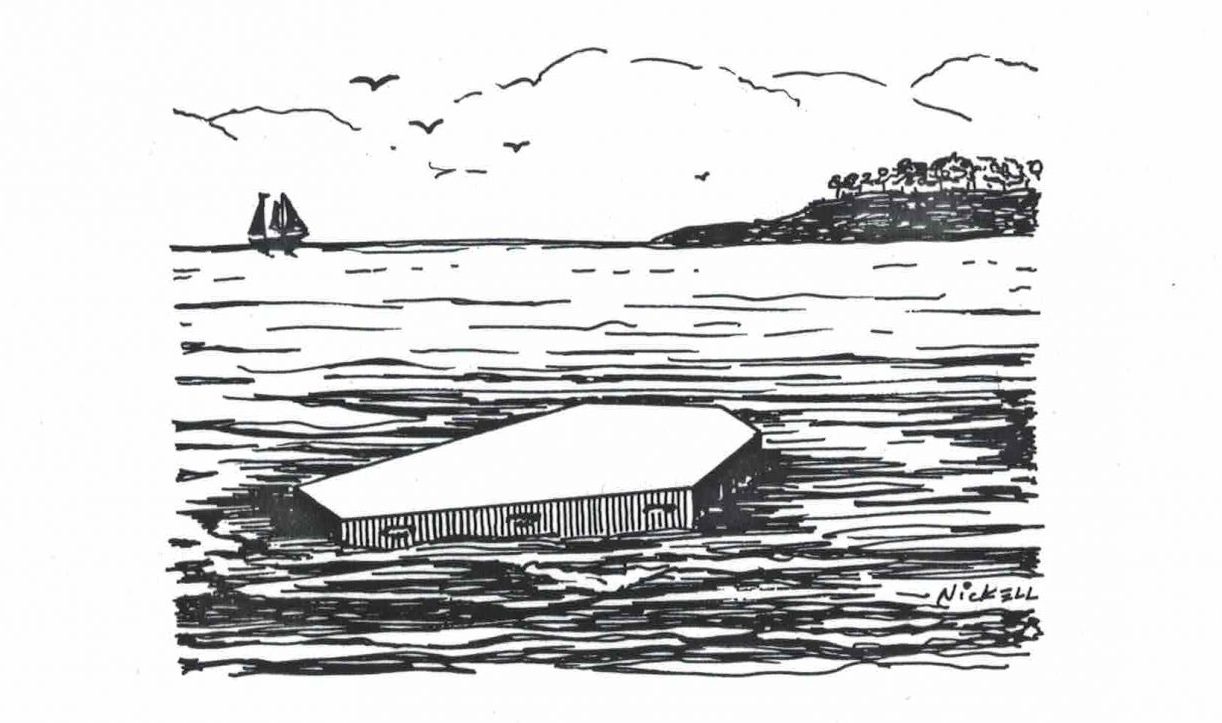 The astonishing story of Charles Coghlan’s coffin has been among the most intriguing claims in the annals of the mysterious, raising the very insistent question: Could a corpse actually develop a “homing instinct”? Could it direct its coffin—freed from its vault by a great natural disaster—across ocean waters many hundreds of miles away back to the land of its heart’s desire? Or was the voyage of Coghlan’s seemingly determined coffin instead one of the most astonishing coincidences in history?

Charles Francis Coghlan (1842–1899) was an actor born to Irish parents living in Paris. Performing on stage in London and New York, he—like many of his contemporary Broadway actors—enjoyed his summers at Bay Fortune in the little Canadian province of Prince Edward Island. In 1899, after performing in Houston, Texas, Coghlan died of gastritis in Galveston on November 27, leaving his wife “prostrated with grief” (“Charles Coghlan” 1899).

However, the most striking element of his four-decade career is the story, launched (to choose an ironic word) after his death. The earliest—and shortest—published version of the returning-coffin account is by Coghlan’s fellow actor Sir Johnston Forbes-Robertson. In his book A Player under Three Reigns (1925), Forbes-Robertson mentions Coghlan dying at Galveston and adds:

Shortly after his burial there, a great storm came up from the Gulf which swept his coffin with others into the sea. The Gulf Stream bore him round Florida, up the coast about fifteen hundred miles to Prince Edward Island, and he came ashore not far from his home.

The very brevity of the story and its lack of any precise detail makes it sound more like a folktale than a reliable account. Indeed, no one was able to discover the reburied coffin. Coghlan’s daughter asked Forbes-Robertson if he knew the site, but he was unfortunately quite vague even about how he had heard the tale. Coghlan’s former manager could himself only say he had heard it “many times.”

The tale became a staple of the strange-mysteries genre. After appearing in Forbes-Robertson’s book, it was published in a 1928 Robert Ripley “Believe It or Not!” newspaper panel (Ripley 1929). Mystery-mongering writers such as Frank Edwards (1964, 82–83) and Vincent Gaddis (1965, 40–41) further disseminated the tale, which gained additional “facts” and errors in the process.

An excellent skeptical look at the proliferating tale was taken by my late friend Melvin Harris in his book Investigating the Unexplained (Harris 1986, 191, 194–196). Harris found that there were no newspaper accounts reporting the coffin’s ever having arrived at Prince Edward Island—where it should certainly have proven a sensation. Likewise, there were no records of the alleged reburial, nothing. He concluded that “the whole story is a fantasy.”

I looked into the tale for my children’s book, The Magic Detectives (Nickell 1989, 102–104), challenging young readers to discover errors and unlikely facts in the retelling. In 1999, after addressing forensic experts at the annual conference of the Canadian Identification Society in Fredericton, New Brunswick, I continued through “the Maritimes” of Canada to investigate several mysteries (Nickell 2000). The trip included my second visit to Prince Edward Island, the alleged landing site in question. I learned little more than how many northbound coffins one might launch before chancing to hit Bay Fortune at the mouth of the Fortune River on the island’s eastern coast.

I acquired scarce books about the awesome hurricane destruction at Galveston on September 8, 1900, including The Great Galveston Disaster (Lester 1900) as well as a little Lutheran tract (Gohdes 1912). Although I became acquainted with the calamity—which necessitated a thousand burials at sea and hundreds of cremations on shore—Coghlan’s ultimate fate eluded me.

My old Toronto friend John Robert Colombo, in his Mysterious Canada (Colombo 1988, 66–67), suggested that the Coghlan tale may have been derived from another “homecoming” story—not of Charles Coghlan but of a different Charles, Charles Flockton. He was a fellow actor who sometimes also spent summers at Bay Fortune. His wish to have his ashes interred there was carried out after his death in 1904, leading Colombo to conclude, “It was one small step from one Charles to another Charles; and one giant leap from ashes to coffin.”1 Be that as it may, there would be still more to the Coghlan story.

Over all those years, none of the persons mentioned thus far knew the true fate of Charles Coghlan’s coffin.

In fact, however, it had long ago been found—years before the homing-coffin tale itself had even been created. A small, two-paragraph story appeared in the New York Times some seven years after the Galveston disaster, telling how the metallic coffin was discovered by hunters, “almost buried” in a marsh and obscured by weeds. The location was only described as “on the mainland in an out-of-the-way place” (“Coghlan’s Body Found” 1907).

The short article went on to make clear that at the time of the flood, the coffin had not actually been buried but only stored in a cemetery receiving vault, pending shipment to New York for interment. Beyond this there is no indication of how the casket was identified as Coghlan’s—nor, of course, what its ultimate fate would prove to be.

Nevertheless, the account does seem to settle the Coghlan mystery. I do not know who was first to relocate the Times article, no doubt by a modern internet search, but it is now widely available (see “Charles Francis Coghlan” 2018). I suspect the true final disposition of the actor’s body is that indicated in the title of a New York Times article dated two days after his death: “Coghlan’s Body to be Cremated Here” (“Coghlan’s Body to Be Cremated” 1899)—that is, in New York where it was to be shipped. That was delayed, and then a hurricane intervened. However, after the coffin was eventually recovered, it may well be that the cremation was finally carried out according to the original intent.

I am indebted to my late friend Melvin Harris for his investigative work and to CFI Libraries Director Tim Binga for providing a copy of the New York Times Coghlan article of January 15, 1907.


The astonishing story of Charles Coghlan’s coffin has been among the most intriguing claims in the annals of the mysterious, raising the very insistent question: Could a corpse actually develop a “homing instinct”? Could it direct its coffin—freed from its vault by a great natural disaster—across ocean waters many hundreds of miles away back to …