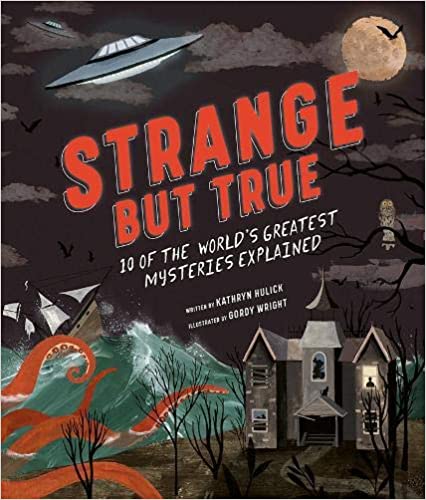 Kathryn Hulick’s Strange but True: 10 of the World’s Greatest Mysteries Explained is a refreshing addition to the strange-mysteries genre—all the more so because it is a children’s book.

Books of this genre typically go wrong in one or more specific ways. For example, they may be essentially mystery-mongering texts. That is, the author is so intent on fostering a mystery as to exaggerate and omit facts, deliberately rendering the proffered mysteries unsolvable for the average reader.

Another approach is to offer the proverbial “both sides” to controversial topics such as UFOs, ghosts, or Bigfoot. This risks leaving it to the reader to separate science from pseudoscience or to sort good arguments from bad—a failed approach if the author is missing in action.

Still another approach is simply to lean strongly toward magical thinking—as if the difficulty of solving some mysteries implies the existence of the paranormal or even the miraculous (examples of the illogic of “arguing from ignorance”). Books following the one-sided approach may even be deliberately biased toward a single special topic, for instance “Strangest UFO Encounters” or “Bigfoot Unsolved.”

In contrast, Hulick’s motivation is admirable. She aims to capture the interest of young readers—as well, I deduce, as those who are still young at heart, who have that enduring quality common to children, scientists, detectives, and many others: curiosity. Let me share a little story.

Once at a conference, the great scientist and inventor, my late friend and CSI Fellow Paul MacCready, hailed me, down the aisle of a shuttle bus, to announce, drawing some attention, “Joe, I’m reading your book The Magic Detectives!” With some mischief, I replied, “It’s for children, Paul!” This drew a big laugh from people, and he joined in. Then he wagged his finger and said, “But you don’t talk down to your readers,” going on to say he was enjoying reading and learning from my selection of paranormal adventures. I’m sure he would have liked Hulick’s book too.

Again and again, Hulick shows she knows her stuff—the fruits of thorough research—and she presents concepts clearly, mindful of her readers. She has consulted various scientists and skeptics (and I am pleased to make a few cameo appearances myself).

In case after case—“The Haunted Mansion,” “The Search for Lost Worlds,” “The Secrets of an Ancient Tomb,” and so on—Hulick gets her facts straight, then draws the reader more deeply into critical thinking. Describing the great desert drawings of the ancient Nazca people, for instance, she brings in the fanciful notion of Erich von Däniken that they were “signs to beings approaching them from great height”: extraterrestrials.

Soon, however, she is giving readers a much more reasonable explanation—one backed up with evidence. Hulick states correctly the prevailing theory about the lines: the Nazca probably “walked along them during religious rituals and used some shapes as gathering sites.” Moreover, “The remnants of offerings, including smashed pottery and seashells, have been found nearby.”

For her chapter on lake and sea creatures, “Monsters of the Deep,” I shared with Hulick an experience related to me by a wildlife technician. While banding ducks on a New York lake in dim light, he suddenly spotted a giant undulating lake serpent. But as the astonishing view continued, he realized he was seeing some otters that his mind was connecting into a single, serpentine creature!

Hulick is skilled at creating word pictures, but here, as often throughout the book, she is ably assisted by illustrator Gordy Wright. He captures the otter illusion for all to experience. The duo should be proud of what they have created. It will pay dividends for a generation—and beyond.