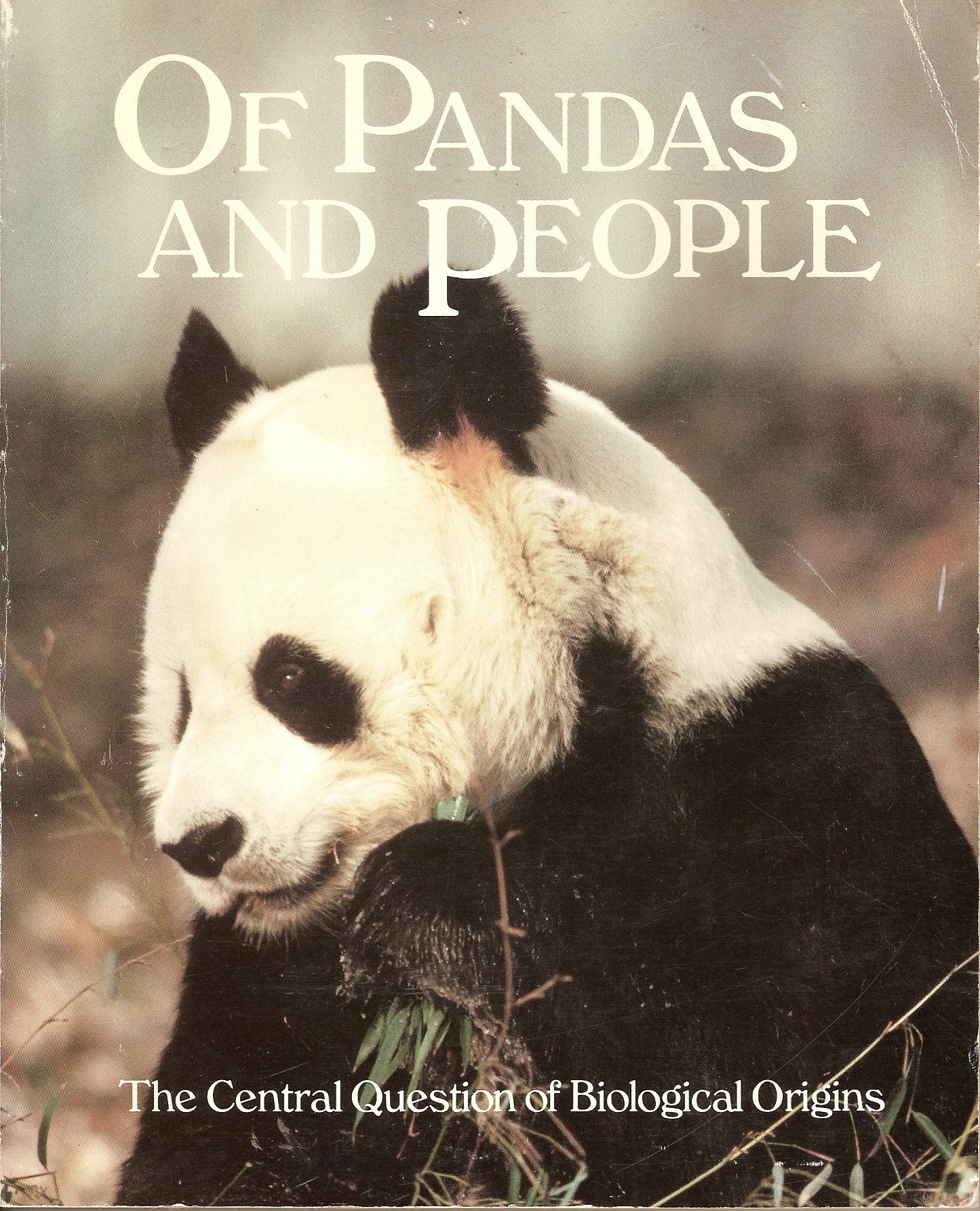 The Foundation for Thought and Ethics, the non-profit which once published the internationally controversial textbook Of Pandas and People, has quietly closed its doors. The financially-struggling organization was completely dissolved some time in early 2016, and its titles have been absorbed by the notorious Intelligent Design group, The Discovery Institute.

Don’t weep yet for the death of Creationist textbooks; you can still order them in bulk through the Discovery Institute website. But the death of the Foundation signals something somewhat reassuring in American education: Intelligent Design textbook publishing doesn’t pay. In fact, last year, the organization declared a loss of almost $14,000 on merchandise alone, and almost $34,000 in total, according to their last IRS filings.

The Foundation for Thought and Ethics first caught the public’s eye in 2004, when one of its books became the centerpiece of a federal court case. The Dover Area School District, which comprises six public schools, had just required that biology curricula cover so-called “intelligent design”:

“Students will be made aware of gaps/problems in Darwin’s theory and of other theories of evolution including, but not limited to, intelligent design. Note: Origins of Life is not taught.”1

The Supreme Court had already ruled that it was unconstitutional to teach creationism in the classroom, so this new theory of “intelligent design” would be its replacement. Of Pandas and People was to be the “supplemental textbook” which would be taught alongside evolution. The federal judge ruled that Intelligent Design “cannot uncouple itself from its creationist, and thus religious, antecedents,” and so could not be taught in a public science classroom.2 Pandas immediately went out of print, but became a notorious symbol of the invasion of pseudoscience in education.

As we approach Pandas’ thirtieth birthday (the first edition was published in 1989), and with the loss of its mother organization, here are a few facts you might not know about the 161-page book, and its theories, that caused all that fuss a decade ago.

Sagan, who openly doubted the existence of God, nevertheless wrote such elegant prose about the nature of the universe, that even the creationists had to co-opt it. “As long as there have been human beings,” he wrote, “we have posed the deep and fundamental questions… on the origins of consciousness; life on our planet; the beginnings of the Earth; the formation of the Sun; the possibility of intelligent beings somewhere up there in the depths of the sky; as well as, the grandest inquiry of all – on the advent, nature and ultimate destiny of the universe.”

The excerpt, however, cuts off just before Sagan makes his point:

“For all but the last instant of human history these issues have been the exclusive province of philosophers and poets, shamans and theologians. The diverse and mutually contradictory answers offered demonstrate that few of the proposed solutions have been correct.”3

This isn’t the only time Pandas exploits ambiguous statements from famous biologists. At one point, the authors claim that Stephen Jay Gould said that the “neo-Darwinian synthesis” was “effectively dead, despite its persistence in textbook orthodoxy.”

Of course, Gould was not questioning whether evolution happened, but whether a particular school of evolutionary thought was accurate. He later clarified that he had spoken too strongly.4

Philip Johnson, who was recognized as the “father of the IDM” (Intelligent Design Movement) at the Dover trial, does not believe that HIV causes AIDS. Johnson, a retired lawyer who was never a scientist, claims that “AIDS careerists” have falsified data to make the AIDS crisis seem worse than it is, and that HIV doesn’t cause AIDS.

Lest there be any doubt, it is a scientific certainty that the human immunodeficiency virus (HIV) causes AIDS. Clearly, where scientific certainties are concerned, Mr. Johnson has a terrible batting average. Johnson’s book, Darwin on Trial is “suggested reading” in Pandas, and Johnson remains an advisor to the ID think tank, The Discovery Institute.5

“We often get the impression from newspaper articles and even some textbooks that scientists have come close to ‘creating life’ in a laboratory. Yet compounds synthesized in the laboratory fail to exhibit the special sequences or the three-dimensional structure necessary for biological functioning.”6

There’s a tricky thing about science. If you base your theory on gaps in scientific knowledge, your theory will only last until science closes those gaps. Which is exactly what happened in 2010, when a team of geneticists in the UK successfully synthesized life. Specifically, they synthesized the genome of a yeast that when inserted into a cell, was biologically functional. In other words, within six years, Pandas was proven wrong.

So much for that argument.

Another example of this tenuous (and ultimately outdated) thinking is the authors’ assertion that “Darwinists” can’t explain why blood clots.

“How do Darwinists explain the origin of the blood clotting system? They don’t, at least not in any detailed, step-by-step fashion.”7

I now introduce you to a 2009 paper presented at the Cold Spring Harbor Symposia on Quantitative Biology titled, “Step-by-step evolution of vertebrate blood coagulation.”

Basing your argument on gaps in reasoning is clearly a losing battle, and this same sort of argumentation continues throughout the book, ad nauseum.

“The standard explanation for the giraffe’s long neck is the advantage it gives the animal when competing for food with shorter-necked varieties.”

“That may be true, but the fact is that the giraffe also bends its head down to the ground to eat grass and drink water. Given the giraffe’s long legs, its neck may just as well be required to reach the ground as the trees.”

Let me get this straight. The prevailing theory, of course, is that giraffes who could eat the harder-to-reach food from tall trees were more likely to survive and pass on their genes. Long legs and long necks would, presumably, both be advantageous, so evolution would favor them. But these authors are suggesting that an intelligent creator gave the giraffes long legs for no reason at all, and then had to compensate by giving them long necks so that they wouldn’t die of thirst. An intelligent design, indeed.

In an effort to try to make the entire distinction of “species” look silly, the Pandas authors question its biological basis. Most scientists define a species as a group whose members can mate and produce fertile offspring, but according to Pandas, that would mean that Great Danes and Chihuahuas aren’t the same species, because their size prevents them from mating:

“The range that prevents interbreeding among the dogs is a range of size. The breeds at the extreme ends of the size range cannot interbreed with each other.”

Of course they can. It’s not recommended, especially if the female is smaller, but Chihuahuas and Great Danes have successfully mated and their offspring are waiting to waste your afternoon on Pinterest.

Actually, most mutations are neutral, but even those that are harmful don’t weaken evolution’s explanatory power. After all, evolution doesn’t just rely on survival; it also relies on the death of the “unfit.” The roughly one in ten mutations that helps one individual survive is the one that wins the evolutionary race.

Unsurprisingly, Pandas makes the completely wrong assertion that there are no “transitional forms” — that is, fossils which document the transition from one species to another. It even goes on to predict that “it seems unlikely that future research will fill” supposed gaps in the fossil record.8

Little could be further from the truth. There are so many transitional fossils, they have their own Wikipedia page. But even Tiktaalik, the fish who could have been the sitting model for the “Darwin fish” hasn’t convinced Creationists. In fact, the Pandas authors practically begged him into existence when they offered this drawing of a fish and amphibian. What could possibly be the intermediate form between these two? 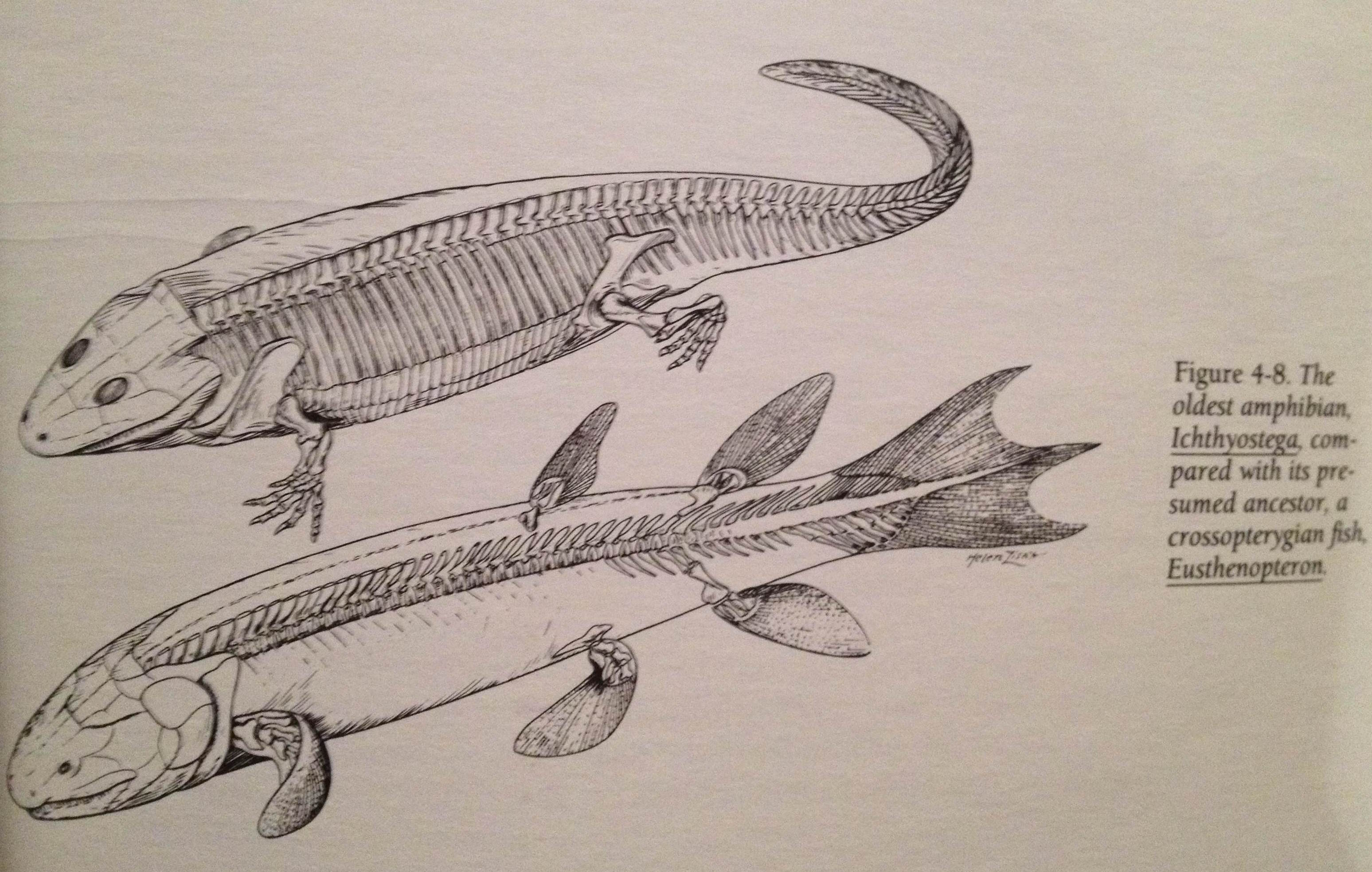 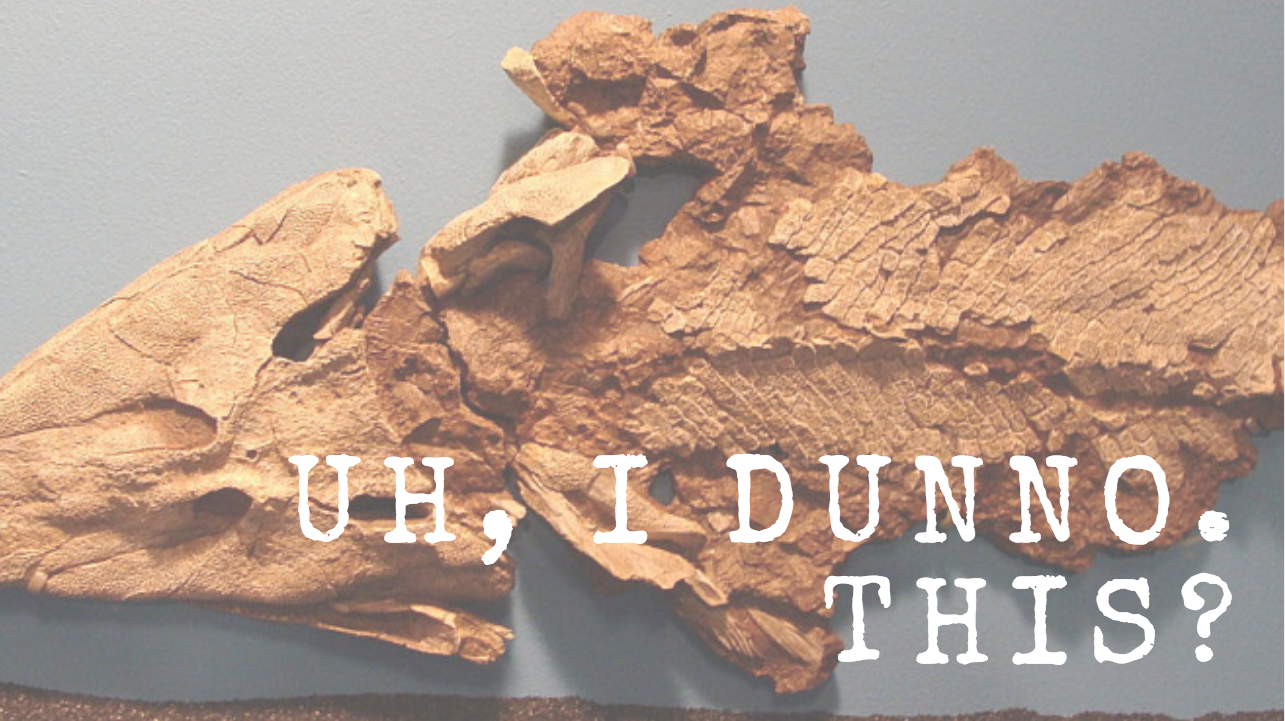 To their credit, and contrary to other Creationists, the authors of Pandas acknowledge that the Earth is much more than 6,000 years old. They even acknowledge that fossils of modern humans date “as far back as 70,000 to 110,000 years ago” (current research puts our origins closer to 200,000 years ago, but Pandas was first published in 1989, so we’ll give them a pass there).

Today, four out of 10 Americans believe that God created Earth less than 10,000 years ago. With almost half of us so clearly ignorant of the science, it’s a bit surprising that Pandas takes the Old-Earth Creationist view. Hey, they got something right! Cherish this moment, because it won’t happen again.

This is really one of their arguments. Since a dog’s paw and a human’s hand are so different, how can we possibly say that we came from the same ancestor? We can’t. QED.

One argument for evolution is that our DNA so closely resembles the DNA of other living things. In other words, the animals who are closest to us on our evolutionary tree have the most similar DNA. But Davis and Kenyon argue that evolution has nothing to do with it.

“If the molecular building blocks used by predators were different from those of their prey, how could they utilize their food?”9

They go on to say that if the molecules weren’t similar, the predator would have to break down the molecules and build them back up into usable food, and “this process would require a great deal of energy. As a result, food chains would be cut short, affecting the entire world of living organisms.”10

Of course, one must wonder why an intelligent designer would be able to create the entire world, and every living creature on it, but not know how to turn anything He wanted into lunch. By arguing that the Designer must design both prey and predator similarly, they are relegating their Creator to the fallible, natural world. He ceases to be all-powerful, and becomes powerless to nature. That’s fine if you think the Designer is an extra terrestrial, but a bit sticky if you think He is, say, the God of the Bible.

After reading 161 pages of this out-of-print nightmare, I can only declare that I am glad it went extinct. Rest in peace, Foundation for Thought and Ethics. We hardly knew ye. 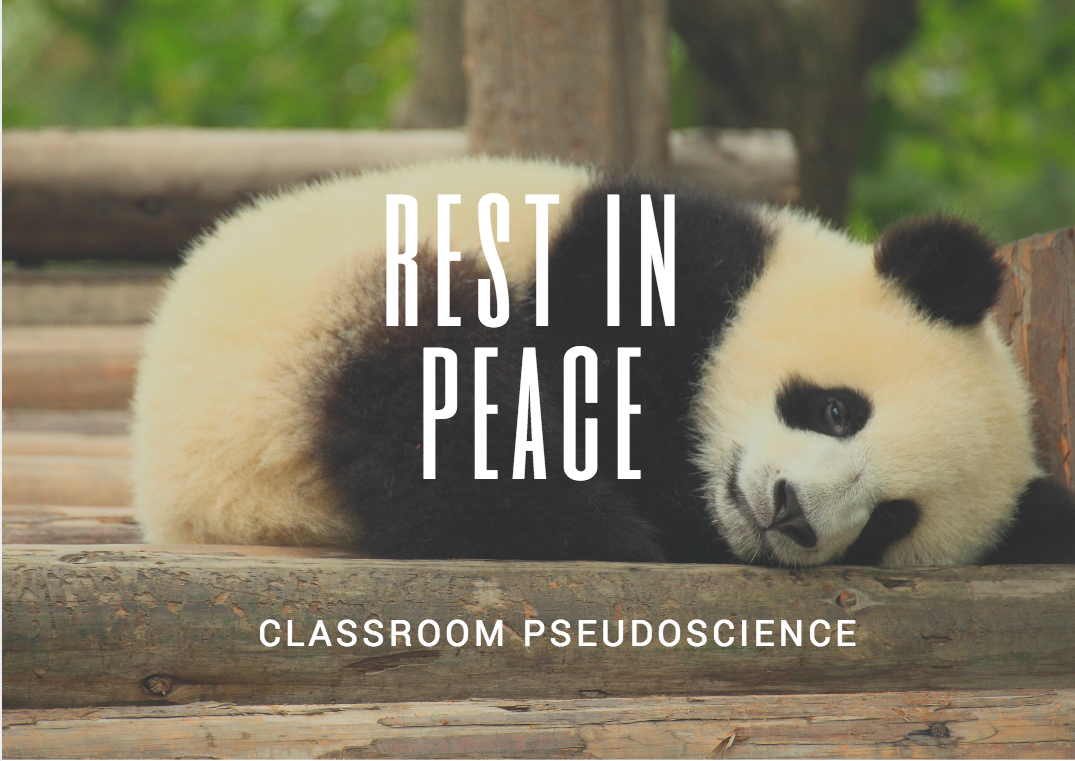