Psychiatry is arguably the least science-based of all the medical specialties. There are no objective blood tests or imaging studies to diagnose mental illness, medications are often not very effective and have bad side effects, and it’s hard to do good controlled studies on talk therapies. No wonder people are skeptical.

Some have gone beyond skepticism to denial. In his book The Myth of Mental Illness, Thomas Szasz denied that mental illness even existed. He thought it was a metaphor for problems in living. He said it had no underlying physiological basis and only described unwanted and unpleasant behaviors. He said diseases are what people “have” while behaviors are what people “do.” He believed that calling it “illness” was a nefarious collaborative conspiracy of the state and the medical establishment to control people whose behavior was inconsistent with societal norms and to repress disapproved actions, thoughts, and emotions.He saw psychiatric diagnoses as judgments of disdain. He rejected the idea of insanity as a legal defense, saying “mental illness” did not explain or mitigate guilt.He accused patients of malingering. He was adamantly against any kind of involuntary psychiatric treatment or commitment. He practiced psychiatry himself, but only as an interaction between consenting adults.

Szasz called psychiatry a pseudoscience like alchemy and astrology. He spawned an anti-psychiatry movement that continues to flourish today. Psychiatry bashing is a popular sport. And psychiatry is the butt of many jokes. One of my favorites: neurotics build castles in the air, psychotics live in the castles, and psychiatrists collect the rent.

Some people assert that antidepressant drugs are no more effective than placebos. But there is good evidence that they are effective when appropriately prescribed for severe depression. They have been accused of causing suicides and violent behavior, but that’s not true. Depression can lead to suicide; treating depression can prevent suicide.

A 2008 study by Turner et al. was reported as showing that Big Pharma and the FDA had covered up negative information about antidepressants. “Health Ranger” Mike Adams said it would be considered criminal activity in any other industry. The reports were very misleading: the study actually confirmed that antidepressants worked. 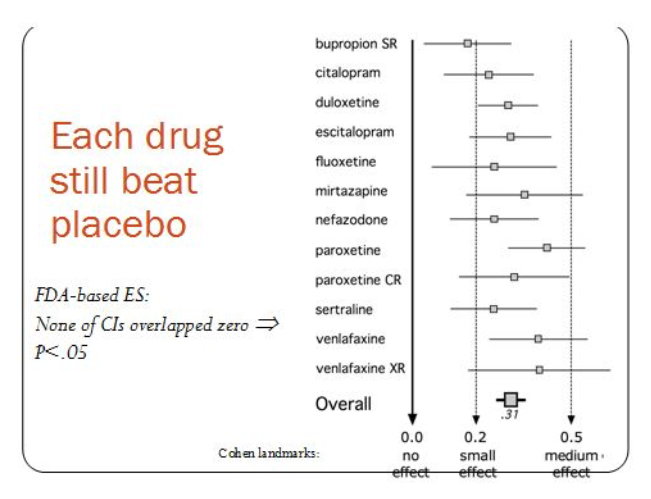 A critic named Kirsch argued that any effect size of less than 0.5 meant ineffective. Turner argued that a small to medium effect had been demonstrated, that 0.31 meant the glass was one-third full not empty, and that even partial responses could be clinically important for patients. Ironically, while rejecting antidepressant drugs, Kirsch strongly supports psychotherapy even though the effect size for psychotherapy is lower than for antidepressants.

What Are We To Do?

The reality is that mental illness exists. It disrupts lives, incapacitates patients, results in deaths, and causes untold suffering for patients and their families. What do those who reject drugs and psychiatrists imagine we are supposed to do about people who are too depressed to get out of bed or who try to kill themselves or others because of hallucinations or delusional beliefs?

Anecdotes are not evidence, but they can help us understand. Even fictional stories can provide a lot of insight. The famous conundrum in consciousness studies asks, “What is it like to be a bat?” We can’t get inside the mind of a bat, but human minds can hope to better understand what other humans experience.

Have you ever tried to imagine what it would feel like to have a severe depression or a psychosis? Have you ever wondered what it feels like to be a doctor responsible for helping patients with those diagnoses? Bats may be beyond our reach, but psychiatrists and patients are not.

Steve Sobel, MD, is a psychiatrist who teaches at the University of Vermont College of Medicine. His book A Five Hundred Pound Amoeba and Other Psychiatric Tales is a collection of ten vignettes of patients with various psychiatric diagnoses, each followed by a narrative from the psychiatrist who treated them. The patients are fictional, but they are realistic composites of patients Dr. Sobel has seen in his practice.

Jake couldn’t think straight and could barely talk. He felt guilty and worthless. He had suicidal thoughts but was too incapacitated to devise or carry out a suicide plan. He wanted to get out of bed, but his body simply wouldn’t obey: he felt like a 500-pound amoeba. Dr. Katz hospitalized him and started him on antidepressants. After three weeks in the hospital, he was ready for discharge. With continued outpatient therapy, he had soon “returned to the human world” and was working and functioning well.

Dr. Katz couldn’t save every patient. Evan was haunted by a demon. Dr. Katz diagnosed him with schizophrenia and tried a series of medications, none of which worked. Evan seemed to be doing better for a while, but on a walk with his parents, the demon unexpectedly returned and forced him to commit suicide by jumping off a bridge. Dr. Katz was tormented by thoughts that he might have done something more to prevent Evan’s suicide but was reassured by his colleagues and was even thanked by Evan’s parents for his support and for sharing their pain.

Alice was psychotically depressed and violently angry. She was convinced her husband was having an affair with a nonexistent woman in the attic. Dr. Katz hospitalized her and started her on antidepressant and antipsychotic medication, and she responded remarkably well after only two weeks. She eventually made a full recovery and was able to laugh at the idea of a woman in the attic.

This short, accessible book puts a human face on a problematic subject. It brings the patients to life and makes you care about them. It is nuanced, describing contributing factors and the complexities of treatment.After reading it, only the most perverse denialist could maintain that mental illness doesn’t exist or that psychiatrists are useless. Thank you, Dr. Sobel.