Harriet Hall, known to many in the skeptic community as the SkepDoc, is a formidable critic of alt medicine, as well as the author of Women Aren’t Supposed to Fly: The Memoirs of a Female Flight Surgeon and a coauthor of the textbook Consumer Health: A Guide to Intelligent Decisions. Harriet blogs for Science Based Medicine and writes for Skeptic and Skeptical Inquirer magazines. She is a fellow of the Committee for Skeptical Inquiry and a member of its Executive Council. She also will be speaking at CSICON.

Susan Gerbic: Harriet, you and I have known each other for many years. We were fellow attendees of the Skeptic’s Toolbox held in Eugene, Oregon. The story as I remember it was that Wally Sampson encouraged you to write an article on alt med for a journal, and then the next thing you knew you were in demand. This was all done after your retirement from the Air Force, right? Can you tell readers a little about how this all happened and some background on who you are?

Harriet Hall: I served twenty years in the Air Force as a family physician and flight surgeon, retiring as a Full Colonel. After I met Wally at the Toolbox, I emailed him to complain about a dietary supplement called “Vitamin O.” O stands for oxygen, and the product had been analyzed in a laboratory and shown not to contain any oxygen, so they tried to prove that it did contain oxygen after all by doing a clinical study. The study was the worst example of junk science I’d ever seen. They got results that were physiologically impossible, and I suspect they didn’t actually do the study; I think they just made up the data. Wally said, “You know, no one takes studies like that seriously enough to critique them. Why don’t you write up a formal critique and we’ll publish it in The Scientific Review of Alternative Medicine.” I protested that I had never written anything for publication and wouldn’t know how to start, but he insisted. I wrote it up, and he published it. But you have to be all serious and formal when writing for a scientific journal, and I thought the whole Vitamin O thing was hilariously funny. So I wrote another, irreverent version of my findings and submitted it to the Skeptical Inquirer with the title “Oxygen is Good, Even When It’s Not There” (available online at https://www.sciencebasedmedicine.org/oxygen-is-good-even-when-its-not-there/). And my career as a writer took off.

Gerbic: You seem to be published all over the place these days, but I do remember you had a column for a short time in Oprah’s O Magazine. How did that go?

Hall: That was a fiasco. The editor who hired me was replaced by a less sympathetic one, and after a few months they essentially fired me without bothering to tell me I was fired. They restricted me to a measly 200 words and wanted to tell me exactly what to write about and what to say. I couldn’t even recognize the final edited version as my writing. Good riddance to O! 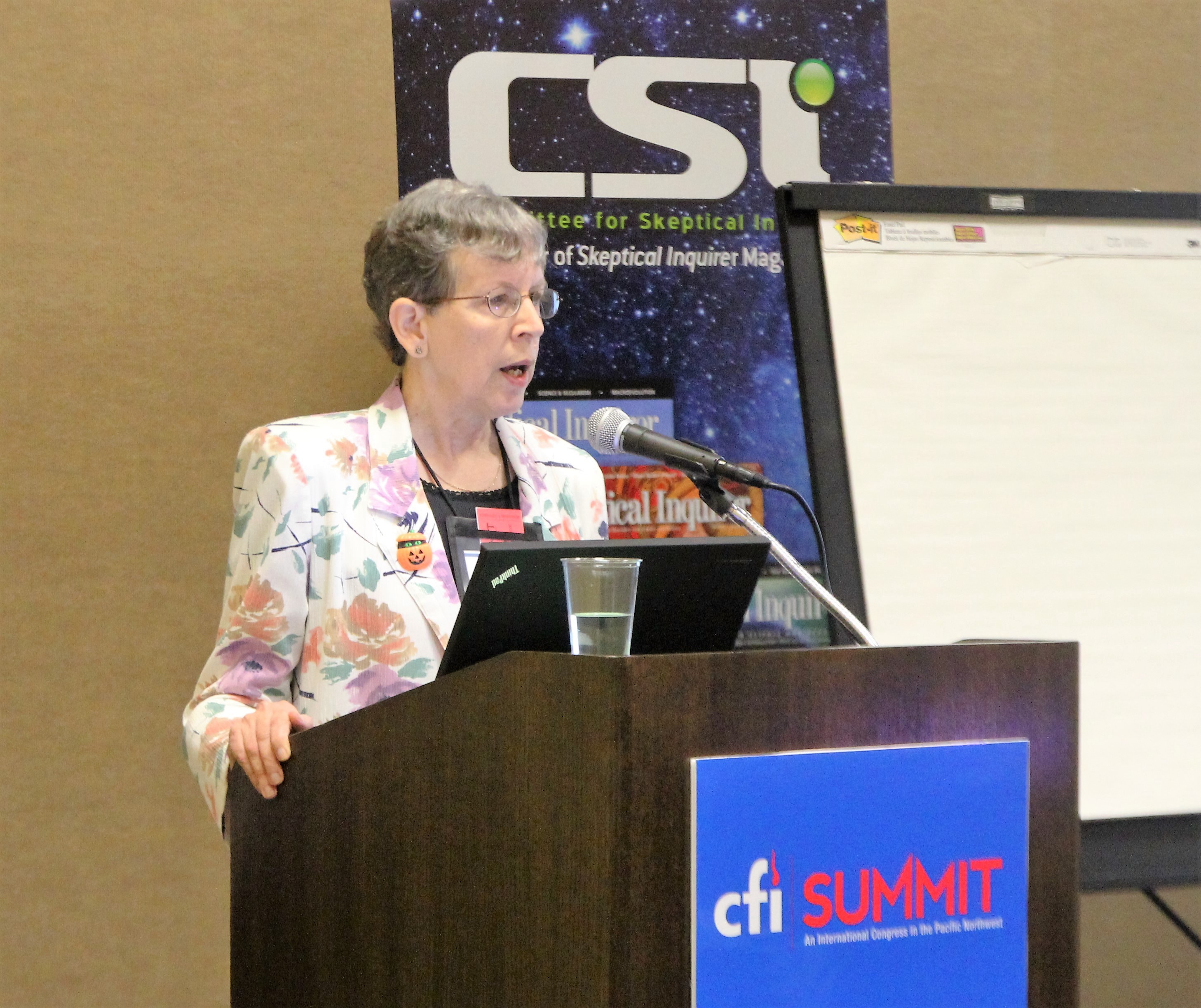 Gerbic: As I said before, we met at the Skeptic’s Toolbox. You were one of the attendees and now you are faculty. It looks like CSICON will be having a mini toolbox on Thursday October 27, at 3:30 pm. Founder of the Toolbox, Ray Hyman, as well as two others of the faculty, James Alcock and Lindsey Beyerstein, will also present at this workshop. Please tell us what attendees can expect?

Hall: It’s impossible to recreate the three-day Toolbox experience in two hours, and we won’t be presenting our usual lectures, but we are planning to divide the participants into teams and let them try their hand at analyzing a case and reporting on their findings. It should be fun! I’m hoping it will persuade people to want more and to sign up for the real Skeptic’s Toolbox in Eugene in August 2017.

Gerbic: You recently released a lecture series called “Fairy Tale Science and Other Pitfalls.” I learned a lot from watching, and every time I share the link on social media several people tell me how much they enjoyed it also. You cover many alt med topics including homeopathy. What has been the reaction to the videos outside our community?

Hall: I think you are confusing two things. “Fairy Tale Science” was a single lecture I gave in Berlin that is available on YouTube. My new lecture series is a free YouTube series of ten lectures commissioned by the JREF, titled “Science-Based Medicine” (https://www.youtube.com/playlist?list=PL8MfjLNsf_miVcNu6eJMNigAMNwQkk_B9). The reaction has been very positive, and I’ve heard from people around the world who enjoyed it, learned from it, found its lessons helpful in explaining things to alt med proponents, and even wanted to translate the text into their native language for the benefit of others. I managed to distill the essence of what I have learned and what I want people to know about science-based medicine and alternative medicine, and I’m proud of it. We had fun doing it; I spoke from my home, and there is a signed Randi doll on my bookcase that we moved around and even hung upside down in one lecture to commemorate Randi’s straight-jacket escapes.

Gerbic: You will be speaking at CSICON on Friday, October 28, at 11:30 am. Can you give us an idea of what you will be talking about?

Gerbic: Harriet, I know you also blog regularly for the Science Based Medicine Blog, so you have been involved in many alt med topics. It seems from reading the news that the world is making great medical strides and improving quality of life overall. Yet there is a small percentage of people that are very vocal that seem to want a stop to vaccines and fully endorse complementary medicine. Am I right to assume that these people have always existed but just seem to be more influential because of social media?

Gerbic: I’ve heard you say that the problem is the “Dr. Google Effect.” All studies I’ve read say that these people are very well educated. How can we reach these people when they already think they have all the answers?

Hall: When people “know” they have found the truth, there is little chance of reaching them. I write for the seekers, those who want to know more, the fence-sitters, the undecided. There’s a lot of false information on Dr. Google, and my aim is to get reliable information out there where Googlers can find it. My SkepDoc’s Rule is: before you accept a claim, try to find out who disagrees with it and why. Quite often there has been no criticism of a silly new claim, so Googlers have no way to tell which statements are false or misleading. I’m trying to correct that lack in my own small way, and I am seeing some hopeful signs that my efforts are not in vain. For instance, if you Google Dr. Amen, you will find my Quackwatch article “A Skeptical View of SPECT Scans and Dr. Daniel Amen.” And Wikipedia cites my articles as references. And I get thank-you emails from people who read what I wrote about a bogus treatment and decided to save their money. 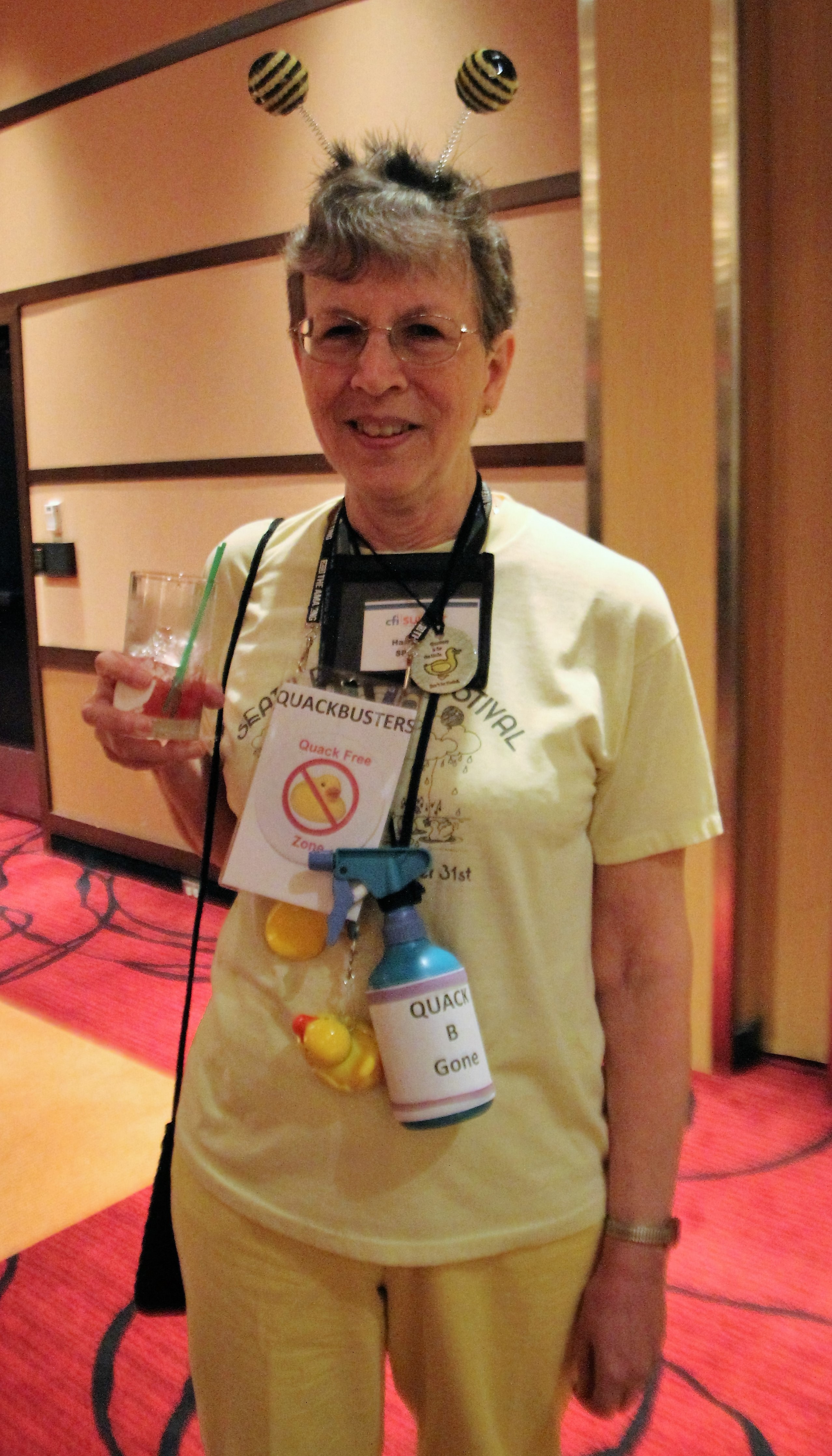 Gerbic: People may not know that you have an incredible sense of humor, so let me assure them that you are quite fun. I remember that at the CFI Summit in 2013 you dressed up as a quack for the Halloween event, complete with a rubber duck. As there is a competition again this year, I’m sure you’re not going to tell me what you are planning, but you are planning on dressing up, right?

Hall: Please! I was supposed to be a Quack Buster, not a quack! I don’t have any plans for a costume this year; I may just go and enjoy everyone else’s costumes.

Gerbic: I can’t imagine you have any spare time left, but what’s next for Harriet Hall in 2017?

Hall: More of same. My SkepDoc column in Skeptic magazine continues; I continue to contribute to Skeptical Inquirer; and of course I continue to write an article every Tuesday on the Science-Based Medicine blog as I have done every Tuesday since the beginning of 2008. I’ve been invited to speak in Australia a month after CSICON and in Los Angeles on Friday the 13th in January. I also have a new monthly column “SkepDoc’s Corner” on the CSI website.