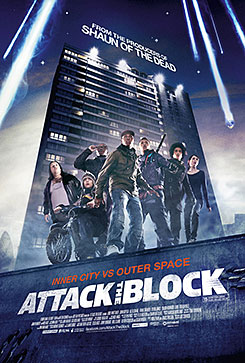 Aliens do not know what they are getting into when they attack a block in the council estates (public housing) in South London. Attack the Block is cheeky, original, gut-busting silliness, but is set on a backdrop that is insightful to the lives of the people in the estates.

Moses (John Boyega) and his roving rabble of teenaged troublemakers, Pest (Alex Esmail), Jerome (Leeon Jones), Biggz (Simon Howard), and Dennis (Franz Drameh), roam the neighborhood looking for ways to make money. They spot what looks like a meteorite and go to check it out. What they come across is an indescribable creature. After a struggle, they bring the creature back to Hi-Hatz’s (Jumayn Hunter) pot-smoking room and head back out into the estates. While there, they visit with Ron (Nick Frost), Hi-Hatz’s nature-show-educated pothead cohort. When they get out, they realize the first creature was just the beginning of their problems—their block is being invaded by aliens. They need to team up with a hesitant neighbor named Sam (Jodie Whittaker).

I love movies, especially horror movies, set in the ghetto. (For American readers, the estates are similar to the projects or ghettos in America.) It is a large sampling of people who know what it takes to survive in a cruel world, so they are less likely to hesitate or act marginally. There are always fewer dumb broads who wait for their man to care for them, or people who are waiting patiently for the police to come and save them. It is usually just a bunch of kick ass people kicking ass. Attack the Block is no exception.

The characters in Attack the Block have to survive their neighborhood on a daily basis. They understand the geography of their vicinity, how to use it to their advantage, how to improvise weapons, and how to survive. The movie is full of weapons made out of what is lying around, improvised weapons made out of household items, and a tactical use of the protagonists’ surroundings to gain an advantage against the attackers.

Attack the Block only makes subtle points and reflections about the people in the estates and their living conditions, some insights more powerful than others. Towards the end of the movie, there is an obvious point being made about the condition of this rabble of teens.

It would be wrong to call Attack the Block a comedy, because it deals with several serious matters, including the neighborhood conditions, drug sales, crime, and violence, in a serious way. There are aspects of the movie, however, that could have had the film team charged with assault for busting the gut of the audience.

More than once, I was so elated that I threw myself against my seat with laughter. I seriously considered leaving the theater to go to the bathroom to make sure I did not pee my pants, but I could not pull myself away. A few scenes were so gross, I was caught shouting “Eww!” at the screen, covering my eyes, and laughing far too loudly to be polite. No one complained, though—they could not hear me over their own laughter.

Even better, the aliens were not humanoid (phew), use the best R.O.U.S. technology (yippie), and come to the planet in an unusual way and for an original reason. The aliens are indescribable, scary, and unique. The characters have a hard time explaining what is happening, because it is not easy to articulate what the aliens look like without sounding completely insane. It is so relieving to see a movie about aliens that has something new to offer.

Attack the Block is ridiculously funny and squirm-inducing and had me shouting more than once at the screen. Now, if you will excuse me, I am going to go see this one again.

2. Attack the Block on IMDb

A review of Transcendent Man Live: a Conversation about the Future

A review of Nostalgia for the Light