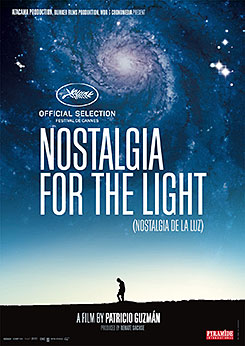 The Past is Now

Nostalgia for the Light is a documentary about time and how it is experienced cosmically and personally, as shown through one small region of Chile. Mind-opening and perspective-changing, Nostalgia for the Light brings the recent and distant pasts so close together, it is almost as if the filmmaker could bend time so the beginning of the universe was flowing into now.

Nostalgia for the Light is a series of interviews of experts in different fields about the study of the past in the high-altitude, extremely arid Atacama Desert in Chile. The desert has no living things in it except human beings. The air is thin and extremely clear. For generations it has been a transit route. During the reign of Pinochet, it was used to house concentration camps in abandoned mining camps and to bury the bodies of political prisoners. It is these conditions that draw people who study the past to converge in this hostile place. It is narrated in part by the director and writer Patricio Guzmán.

Nostalgia for the Light starts by explaining why people study the cosmic history of the universe in the Atacama Desert. It is asserted that the lack of moisture makes for the world’s best view of the stars—and one might be persuaded by the sheer number of observatories.

Astronomer Gaspar Calas speaks throughout the film about the cosmic perspective of the past. His insights in the beginning of the movie are attention-grabbing and require some thought to fully appreciate, but in a way that made me even more receptive to what else he had to offer. He gently opened my skull and dropped ideas in my brain, leaving a gap open for the people who came after.

After Calas, we meet Lautaro Núñez, an archeologist who takes us around the desert showing us the transit paths of llama shepherds of the past. He explains the people’s history of the desert. It is during discussions about the recent era (19th century) that we get the first hints into the problem of those who willfully forget or dismiss Chile’s past.

Vicky Saaveda, Violeta Berrios, and a few other women go through the Atacama Desert by hand with small shovels looking for the bodies of their dead loved ones who were taken during Pinochet’s rule. They wander, digging, hoping to find mass graves or the graves of individual people. During their digs, they often find small fragments of human bone blowing across the desert.

It is these little fragments of bone that tie the entire cosmic story together. Nostalgia for the Light is a painful mace that gives new meaning to Sagan’s quote, “We’re made of star-stuff.”

The slow pace of the film allows for time to process the depth of what is being offered, but at times it does drag. I was a bit bored of watching the observatory dome opening and closing or rolling around the tracks. It is not a film-killer though; some time is necessary to make the connections because Patricio Guzmán does not beat the viewer over the head with the themes—for which I am eternally grateful.

Nostalgia for the Light did not just give me insight into Chile or the Atacama Desert; it gave me new ways to think about time, what it means to live in the past, and if it is even possible to do anything else. It is full of thought-inspiring insights, comments, and themes. The use of cold factual perspective and warm emotion creates a choir of bells ringing a beautiful, haunting, strangely wonderful, and disturbing song.

Before this film, I had never simultaneously felt the sensation of soaring on the wings of wonderment and sinking into a tar pit of sadness. My heart was torn and sewn back together over and over again during Nostalgia for the Light. I cannot suggest Nostalgia for the Light highly enough for anyone interested in the effects of the past, historical or cosmic.

A review of Transcendent Man Live: a Conversation about the Future

A review of Attack the Block