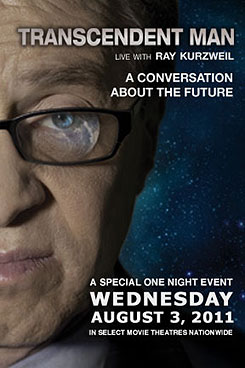 On the panel were Ray Kurzweil, inventor and futurist; Barry Ptolemy, director and producer; Steve Wozniak, cofounder of Apple; Michio Kaku, physicist and television host; Tan Le, technology entrepreneur; Dean Kamen, inventor; and Deepak Chopra, doctor and spiritual leader. It was hosted and moderated by Ellen Ratner and Alan Colmes, both of Fox News. There were several celebrity cameos including Al Gore and Suzanne Somers.

Some background: In 2009, Transcendent Man was released. In it, Ray Kurzweil tries to convince the audience that in the near future humans will merge with machines and we may even stop aging. It is this potential merger, which Kurzweil calls the Singularity, that the panel discussed in Transcendent Man Live: a Conversation about the Future.

The first few minutes of the telecast were a tribute to Ray Kurzweil and his accomplishments—a credibility reel to give the audience a reason to consider his point of view. Then Kurzweil explained his theory of the Singularity and the importance of exponential thinking to the audience. He explained that when people were on the savannah, they had to think laterally because of their surroundings. For example, a lion will not run at an exponential rate.

Kurzweil outlined his proof that lateral development (one innovation at a time) is not how information technology evolves and it is not the way to think of it in the future. It is because of this exponential growth of information technology that he believes nanotechnology, innovations in genetics, and robotics—including artificial intelligence—will be a billion times more powerful in twenty years than they are now. When this happens it will allow us to merge ourselves with our machines and allow machines to merge with us.

Essentially, the Singularity will occur when we know enough to repair our genetic flaws (including aging) and have machines small enough to enter our body to do the repairing as well as increase our intelligence.

The panel, an eclectic collection of people and professions, was a mixed bag. Some offered exquisite moments of mind-changing insight; others made insipid, excruciating, forehead-slapping remarks. It reminded me of the last time I had a bag of Jelly Belly’s Every Flavor Beans. When sampling from a bag of Every Flavor Beans, one is almost as likely to get a disgusting Vomit Bean as a delicious Juicy Pear Bean. Every time I get a bean that tastes good, it is a half-hearted victory because I know it has raised the probability that I will soon be sucking on an Earwax Bean.

When discussing why people should not fear becoming merged with machines, Kurzweil explained the human physical condition in a way that I had never heard before. It was both accurate and poetic. He said that humans are not their bodies because our bodies are renewed every seven years with new cells. Instead we are more like the shape of water as it goes over rocks in a river—not the water, not the rocks, but the shape. In the context of the discussion, it was a beautiful metaphor that rearranged my understanding of self.

As soon as Kurzweil earned some credibility in my mind, he then threw it in a dumpster with a ridiculous endorsement of notorious-to-the-skeptical-community Suzanne Somers and her plan for a healthy life. For those readers not in the know, Somers decided not to get cancer treatment in place of “natural” options. Now she is seen by some, including Kurzweil, as a mogul for staying healthy. Her plans include bioidentical hormones, whole foods (unless you want to buy her processed food instead), and various other dietary supplements and vitamins.

It is hard for me to take Kurzweil seriously on matters of the future of science and development when he throws his hat behind an advocate of faith-based healing (for which there is no evidence of success) such as Somers.

Listening to the panelists was like playing a terrible television game show. Every question was an opportunity to look behind another curtain. Just as in game shows, sometimes a point was made that was so valuable to the discussion that a member of the audience should have jumped up and down as if a prize had been revealed. Other times, panelists gave an attention- and credibility-sapping donkey of an answer.

In fact, from the beginning, it was obvious there was going to be a real problem with the discussion. Everyone on the panel and the hosts were there in person except Deepak Chopra, who was telecast onto a television in the room. Worse, the television was set in the exact middle of the panel on a pedestal, making Chopra look like a revered, disembodied floating head. It resembled a makeshift altar to Chopra, even if only in impression.

As far as I am concerned, when you put Deepak Chopra on a panel to discuss scientific revolutions, the discredit is done. No matter how credible the other persons on the panel may be, good manners dictate that they not treat a religious representative or resident dullard with the condescending or dismissive tone deserved.

Except for one exchange between Michio Kaku and Chopra about quantum physics in which Kaku lost his cool and put Chopra in his place, good manners won out over scientific inquiry and debate. Much to my disappointment, even though the panel members were often displaying physical signs of disgust, outwardly they treated Chopra as if he had an equally valid point of view.

Worse, Chopra demanded attention. He felt the need to address every single question even when other members of the panel had barely spoken and had more requisite knowledge to give an accurate answer. Had I not been carefully listening so I could write this review, I would have just checked out during his vocal expressions of intellectual vomit.

The moderators were extremely frustrating. It was obvious that neither has a background in science journalism. Ellen Ratner seemed ill prepared to cover the topic and the nature of her questions led me to believe she did not really understand what was going on. Alan Colmes had a bit of a better grasp, but he made jokes that could most generously be described as common. The most insightful remarks that came from the panel emerged when the discussion drifted slightly off the topic. Even still, there was a question about God that seemed misplaced and brought out the worst in almost everyone on the panel.

The problems aside, I really did gain valuable perspective about the Singularity, as well as some new orientations to consider about merging ourselves with machines. Frustration aside, Transcendent Man Live: a Conversation about the Future was worth watching for those few diamonds in the rough. If nothing else, it was an excellent way to exercise critical thinking.

I think I would have enjoyed it more at home with a group of friends, engaged in conversation about what was said instead of sitting silent in a theater. If or when Transcendent Man Live: a Conversation about the Future is released on DVD, I will do just that. I suggest the same for the readers of this review.

A review of Nostalgia for the Light

A review of Attack the Block