Professor Edzard Ernst has written the story of his life as a doctor and a scientist, in A Scientist in Wonderland: A Memoir of Searching for Truth and Finding Trouble.


Despite a youthful ambition to become a jazz musician, he studied medicine and became a medical research scientist, taking up appointments in Germany,
Austria, and finally in England.


Professor Ernst’s reverence for the pursuit of truth through the application of scientific methods led to an appointment as the world’s first chair in
alternative medicine. Clashes were inevitable and this memoir provides a unique insight into the cutthroat politics of academic life and offers a
sobering reflection on the damage already done by pseudoscience in the field of medicine. 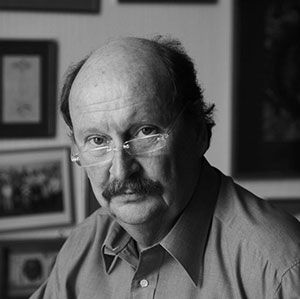 Edzard Ernst: I studied medicine a long time ago in Munich. I’m German‑born. My first job was in the homeopathic hospital, so I was exposed to all sorts of alternative
medicine. Initially quite impressed with it, then I took a job in London and become a scientist, worked in some basic research for a while, went back into
clinical medicine, became professor of rehabilitation medicine, first in Hanover, and then took over a large clinical department in Vienna.

During all this time, alternative medicine was sort of a hobby for me. One day I saw a post advertised in Exeter, England, for the first chair in
complementary medicine, which is the same as alternative medicine. I applied; I got it, built up a research team. We did some decent work for about twenty
years, and now I’m retired for about three years.

Kylie Sturgess: You’ve recently written a memoir, A Scientist in Wonderland ‑‑ A Memoir of Searching for Truth and Finding Trouble. How did you come up with the
title? It’s a very catchy one.

Ernst: My working title when I started writing the book five years ago–I worked a very long time on this book–was “Alternative Medicine: The Inside Story.” I
felt there was so much to be told and there were so many misconceptions with the public about alternative medicine that it would be necessary to tell the
truth about it.

Then some people saw a first draft and they said, “No, no, this is not going to be interesting enough. You need to write a much more personal book. You
need to write where you come from, your background, and so forth.” In other words, it was turned into a memoir, initially somewhat against my will. I don’t
like talking about myself, nor writing about myself all that much.

Sturgess: It can be very challenging. I’ve noticed that there’s been some very strong reactions from what I’ve seen on your site. Did you expect positive
reactions? There’s mostly a lot of praise.

Ernst: I was involved in a couple of quite public disputes, for instance, with the Prince of Wales, with my own institution, with my own university. I’m not at
all surprised that the reactions are strong, and probably we haven’t even seen the start of it.

Before the book was published, it was seen by lawyers and I had to omit quite a few passages from it, because they were thought to be libelous. I was
involved in a libel case recently here in Britain, which is very, very unpleasant. I wasn’t the subject of the libel case, but Simon Singh was sued by the
chiropractors for our last book. That was really most unpleasant. Mostly for him, but also for me.

No, I’m not at all surprised to receive strong reactions. I expect there will be even stronger ones. My own university hasn’t even begun to react.

Sturgess: Gosh. Are you looking forward to seeing what’s being said?

Ernst: I just hope that the lawyers did a good job and they can’t sue me for libel!

Sturgess: Fair enough! How about we go back to the beginning? Since this is after all a memoir, and hopefully not spoiling the book. What was it like in the early
years when you first trained in alternative and complementary medicine? What were you feelings about it back then?

Ernst: As I said, I was exposed as a junior doctor to this area, and I was quite impressed by it. Then it became a hobby, and we did occasionally a bit of
research here and there. When I took over the Exeter post, I was of course aware that I had to leave my own feelings and preconceptions behind and should
work as a scientist, as unbiased and objectively as possible.

We tried to do that as a team. It worked quite well until the results of our research were predominantly negative. This led to more and more upset with the
alternative practitioners, with lobby groups, with Prince Charles’s lobby group, with Prince Charles personally, and eventually even with my own
university, who initially thought I was doing fine–without exaggerating, initially I was a bit of a star in that university.

Then feelings soured because Prince Charles filed an official complaint through his first private secretary. This was very strange. People in this country
are really quite anxious in certain positions to get a knighthood. My two superiors did receive a knighthood once they had mistreated me–no causal
connection implied, because otherwise I might get sued for libel.

But that’s how it went. I went from being well‑appreciated to basically being treated like dirt.

Sturgess: It’s very uncomfortable to leap through that in the first place, but having to revisit in a memoir, what was it like writing the book and having to look
at those facts all over again?

Ernst: That is quite a strange feeling, because it brings it all back again. Luckily, I had long started writing a diary and kept copious noted and emails, so I
had something to fall back on. Nevertheless, the feelings come back and in a way, there’s a danger of writing something that tastes of sour grapes. I tried
to steer away from that and just be as factual and sometimes lighthearted as possible, but, of course, it’s not easy.

On the other hand, it’s also therapeutic. Once you have gone through this type of experience, you have the urge to tell the story. In a way, it’s good to
tell it, and it’s even better to see that at least some people appreciate it.

Sturgess: Now, of course, one of the things that’s raised in regards to the book, the zeitgeist of cultural relativism. It’s a big problem in ethics and it’s a big
problem in science. Just how difficult did it get during those times?

Ernst: From the beginning, I made it very clear what our research agenda was: efficacy, safety, and health economical studies. So I was going to stay very clear
of all this post‑modernism that flies about in my field of research and in some other fields.

I believe that was the right decision. I don’t think highly of this relativism. I feel science provides tools to find the truth, or if we can’t find the
truth, at least approach the truth. If we start from the premise that your truth is as good as mine, if not better, and many truths exist, we are in
trouble.

This is not at all what I’m trying for as a scientist and as a medic. For me, a treatment either generates more good than harm or it doesn’t. It’s perhaps,
to some people, quite simplistic, but to me this is the only way to make real progress.

Sturgess: Now I’ve seen ongoing discussion, it still continues on today, about the intersection between media and science communication. How well does the media
and science serve each other, in your opinion?

Ernst: That’s an interesting question. At one stage in Exeter, I was told I wasn’t supposed to talk to the media anymore. Not that I ever went out myself to
talk to the media. I just was trained to give polite responses when journalists inquired about my work.

At one stage, I was so much in the limelight of the British press that I got almost daily emails or telephone calls, and I duly replied to them. At one
stage, for my dean, this level of attention to my work seemed to be too much. He instructed me to seek his approval. I told him to go yonder and multiply.
I just ignored it, because he effectively was interfering with the freedom of press, with academic freedom, et cetera.

The media can be tricky. Most scientists are scared stiff to talk to journalists. I was brought up differently. I always thought that the media can be
helpful. They certainly are not always helpful and if I had a pound for every misquote, I would probably be quite a rich man. I tried to use the media in
the best way possible, and in alternative medicine this is important.

You might talk to colleagues, to scientists, to doctors about the value of this or that therapy, but in alternative medicine, you would be missing the
target. In alternative medicine, you need to talk to the man or the woman in the street. It is they who make the therapeutic decisions, often entirely
without any assistance from healthcare professionals. This is why the media become much more important than in any other field than of medicine.

Having realized that, I tried to be as productive as I possibly could with the media, and I had good help. Here in Britain we have the Science Media
Center, and they were extremely helpful in establishing communications. They often invited me to give presentations to journalists, et cetera.

I think, in my field, the media have the potential to do a lot of good, and I try to channel them in that way.

Sturgess: You’ve written about the past in a memoir. How do you see the future?

Ernst: My personal future is to carry on. I have a very busy blog, and I write almost daily on the blog. I started a new book with an American co‑author. I give
lots of lectures and I still do some bits of research. I will carry on doing the sort of things that give me pleasure.

In other countries, there are equally powerful lobby groups. If I had had any choice in the future, alternative medicine would have to follow the path of
any good healthcare, and this has to go the path of evidence‑based medicine. That’s the long and short of it, basically.

The official site is http://edzardernst.com.