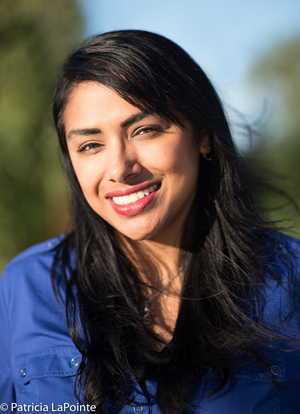 Kavin Senapathy is a science communicator who lives in Madison, Wisconsin. She writes for Forbes on many topics; you can check out her contributions here. Kavin will be speaking at CSICon Saturday, October 28 along with Natalie Newell at 11:00 a.m. They will be showing a film called “Science Moms.”

Susan Gerbic: Hello Kavin, very nice to meet you finally. I hear about you everywhere. We need all the science activists we can get. Can you please tell readers more about yourself?

Kavin Senapathy: Likewise, and I also hear about you often! I’m a communicator tackling myths on science, health, medicine, food, biotechnology, parenting, politics, and their intersection. In my free time I like to watch home shopping channels, but I only make a purchase like once a year. It’s mostly for entertainment. I’ve loved Michael Jackson since I was a kid, so much so that I received several condolence messages when he passed away. Perhaps of interest to CSICon attendees—I was raised strongly atheist by parents who were raised Hindu. I’m pretty rebellious so I no longer identify as atheist.

Gerbic: You will be speaking at CSICon, Saturday October 28 at 11:00 a.m. You and Natalie Newell will be showing us a movie about science-minded moms. How did this come about?

Senapathy: It all started with Buffy the Vampire Slayer! One day, the group of Science Moms (we had already been working together and sharing ideas well before the film was born) realized that celebrities such as Gwyneth Paltrow, Jillian Michaels, Ginnifer Goodwin, and Sarah Michelle Gellar had jumped on anti-GMO bandwagon. Layla sent a message on Facebook lamenting how tragic it was that Buffy was anti-GMO! Layla and Alison in particular love Buffy, so this was upsetting to them! People perceive scientists as these serious, lab-coat clad folks in mysterious labs but, the truth is, scientists love Buffy too. Anyway, we had to do something. So, we wrote an open letter to the celebs, published on evidence-based parenting site Grounded Parents. Other parents signed on, including farmers, communicators, scientists, and even Julie Borlaug, of the Norman Borlaug Institute, and granddaughter of the great Norman Borlaug.

Natalie Newell came across the letter and was inspired. She decided she wanted to make a film following moms who choose to make parenting decisions based on facts rather than misinformation. She reached out with this exciting proposal, and we were in.

Gerbic: You are the coauthor of The Fear Babe: Shattering Vani Hari’s Glass House. What about Vani Hari’s story was so compelling that made you want to focus on her when there are so many others like her out there?

Senapathy: Vani Hari had a pretty strong grip on the food narrative a few years ago, and it’s heartening to see that the mainstream media has largely discredited her. As one of the most popular misinformation vectors in recent times when it comes to food, health, and agriculture, she was not only an effective framework to examine some of the most common misconceptions about these issues but why and how they proliferate.

Gerbic: Madison, Wisconsin, does not come to mind as a hot-bed of science supporters, but I see you did the March for Science this April. They reported between 4–5K people showed up. What is it about the demographics of Madison that made that many people show up and speak out?

Senapathy: It was awesome getting to lead science chants and speak at the March for Science in my own community. I think part of what brought so many people out, in addition to UW–Madison, is that Tia Nelson, conservationist, climate change champion, and daughter of Earth Day founder Gaylord Nelson, gave a speech at the event.

Gerbic: I’m really interested in the March for Science, and I will be speaking about it on Friday at CSICon. I’m concerned with a march like this having a slacktivism feel to it. People showed up got real excited and then nothing happened after that. Really interested in your thoughts?

Senapathy: The international momentum of the march was inspiring and I do think that people want to carry it forward. But I also believe that it was fundamentally flawed in some ways, including that a march “for science” is very broad in scope, which seems to have led to a dilution in efforts and also left the organization open for exploitation. I wrote about it in my column before the march. I also implore people (as I always do) to really look at the big picture when it comes to science, policy, education, and the environment. For example, many who champion fighting climate change are also anti-GMO because they assume these technologies are bad for the environment. In reality, genetic engineering in agriculture can enable increased carbon sequestration and help farmers use land and resources more efficiently. Showing up on Earth Day with signs is great, but it’s easy. Making truly evidence-based decisions, based on the broad weight of data rather than cherry-picking and confirming our biases, is not as easy. And championing for and creating change based on these data is downright hard. See: Forbes Article.

Gerbic: You have this group, March Against Myths (MAMyths), that is pro-science and pro-biotech. I heard you say on one video, “We are not going to give up, wherever myth mongers show up, especially when it comes to science, and when those myths cause injustice, which is often, we will be there.” From what I’ve learned reading your website, this group that marches against Monsanto is losing steam, but they have adopted an anti-vax agenda now. This sounds fascinating; what’s the story on this?

Senapathy: Ah yes, I said that during live video from Chicago this past May. They are definitely losing steam. MAMyths took science to the streets to counter-protest three years in a row, and their numbers are dwindling, with some of our chapters reporting that there was no MAMyths rally to counter-protest. I wrote about the connections between the anti-GMO and anti-vax movements recently here, including some info on March Against Monsanto.

I should make it clear that MAMyths is NOT a march for Monsanto. We are an activist group that fights pseudoscience injustice. I am pro-technology and pro-innovation but think that all businesses and their practices should be evaluated on a case-by-case basis.

Gerbic: One of my big passions is psychic mediums; we call them grief vampires. I have been involved in many stings and protests against them; our focus isn’t on the believers that show up but to shake up the psychics who are really just performers. If the performer gives a bad performance then the whole tone of the event is harmed. As I watched some of your protest videos I wondered who your audience really was. I’m not sure you think you are going to convince anyone on the other side. What is your goal?

Senapathy: Our goal is definitely to shake up the leaders of this movement and destabilize their footing, but for me, the audience of these types of public actions is the middle ground, observers who may be unsure but not ideological about these issues. I see it as giving voice to the justified anger and passion of scientists and science supporters when we see the injustice that myth-mongers perpetuate. Science, by its nature, is cautious, but there is a time and place for scientists to channel grievances in a more visceral way. The other “side” is angry too, but we channel ours with reason and with compassion. I think it’s acceptable to compartmentalize. For me, that means that that vast majority of my communication efforts reflects the nuance of data and science. When I write or speak, I only use the term “GMO” to describe how meaningless it is. But when I March Against Myths, I wear an “I ❤ GMO” t-shirt. We’re particularly excited to now be able to reach the audience of the new Food Evolution documentary, narrated by Neil deGrasse Tyson, in which one of our counter-protests is featured.

Gerbic: You are a mom of two young children. If I understand correctly, you became more involved in science activism because of your children?

Senapathy: I grew up loving science, prose, and storytelling. I was always especially into the life sciences. But what first inspired me to start communicating about these issues was becoming a mom. The overwhelming anxiety of new parenthood really got to me, and as I navigated being a new mother, I sought out information; I was a sponge. But I encountered only slivers of credible information in a sea of BS. I realized that parents are inundated with fear-based marketing, chemophobia, and alarmism. So, I was driven to somehow reach and save other parents from the rabbit hole that so many fall into.

President Obama said after the Sandy Hook massacre: “Someone once described the joy and anxiety of parenthood as the equivalent of having your heart outside of your body all the time, walking around. With their very first cry, this most precious, vital part of ourselves—our child—is suddenly exposed to the world.” The love and anxiety that comes with parenthood is indescribable and ripe for exploitation.

In addition, for a lot of parents, and especially moms, parenthood becomes a part of our identity; sometimes disturbingly so. It’s easy to lose part of who we are and let the mommy identity take over, and when that happens, unfortunately, being a “good mom” can seem like a competition. This is also easy for purveyors of misinformation to exploit.

Gerbic: CSICon is happening at Halloween time. I’m not sure how into the holiday you are, but the theme is a zombie disco one. I’m hoping to get a group of people to reenact the Michael Jackson Thriller dance scene. Any chance I can count you in on that?

Senapathy: Let me know what you end up planning. I just need a little time to practice/refresh my moves.

Readers, CSICon is quickly approaching, it will be an amazing experience. I strongly encourage you to get your tickets soon as it will sell out. Skeptical conferences are not only the time to see and interact with great speakers, but it is a fun social interaction with your peers. Show up on Wednesday and leave on Monday to get the full experience; there is so much conference outside of non-scheduled times. Follow the CSICon Facebook page to learn more about what is happening outside the schedule.