In September 2019, the Center for Inquiry (CFI) was asked to investigate an alleged audio recording of a ghost, commonly referred to as electronic voice phenomenon. For those not be familiar with this term, the best description I’ve found comes from Stephen Wagner: “Electronic voice phenomena, more commonly known as EVP, is a mysterious event in which human-sounding voices from an unknown source can be heard on recorded data from audio tape, radio station noise, and other electronic media” (Wagner 2019). Some people believe they’re capturing the voices of ghosts.

The request came from Bruce Adams, an artist who created many covers in the early years of Skeptical Inquirer, as well as those for sister magazine Free Inquiry. Being a skeptic, Adams wrote, “A friend of mine has a brother who went to one of those haunted places where ghost-hunters say there are spirits that respond to questions through EVP recordings. The story goes, he used his own phone and heard nothing when they were there. But when they went back to the hotel room and listened with headphones, they heard answers to some of their questions. One answer (which I can tell you about if you want later) turns out to have a meaning that the brother did not even know about before hearing the recording and then doing research.” Adams requested we take a listen and, if possible, offer some explanations for the perceived voices.

Barry Karr, executive director of the Committee for Skeptical Inquiry, forwarded the request to me, asking if I could investigate this further. I eagerly took a closer look. I first contacted Adams directly, explaining who I was and requesting the audio file, which he later sent along with an edited version of the original email he received from his ghost-hunter friend. Adams removed the ghostly responses interpreted by his ghost-hunter friend so I wouldn’t be primed to hear what they had. The original email still contained valuable information for my investigation, which I read before listening to the audio: “The Inn was around and active during the Civil War and the barn on the property was used as a hospital during the Battle. It was owned by a couple named Cornelius and Anna. Listen to all of it, the EVP’s are constant throughout the session and often hard to discern exact words. My phone records in stereo (who knew???) and if you listen with headphones, you can even hear some of the voices panning from side to side, implying the ghost was walking around us.”

Though the identity of the location was not given, two images of it were included in the email; one exterior view showing the side of an old barn and an interior view displaying a rustic banquet hall. Once I read that the barn was active during the Civil War and had been used as hospital during “the Battle,” I figured this location was most likely in Gettysburg, Pennsylvania. A quick Google Images search revealed the location to be the Battlefield Bed & Breakfast, a popular wedding venue there. Not surprisingly, it also has a reputation for being haunted—as do many locations in Gettysburg. 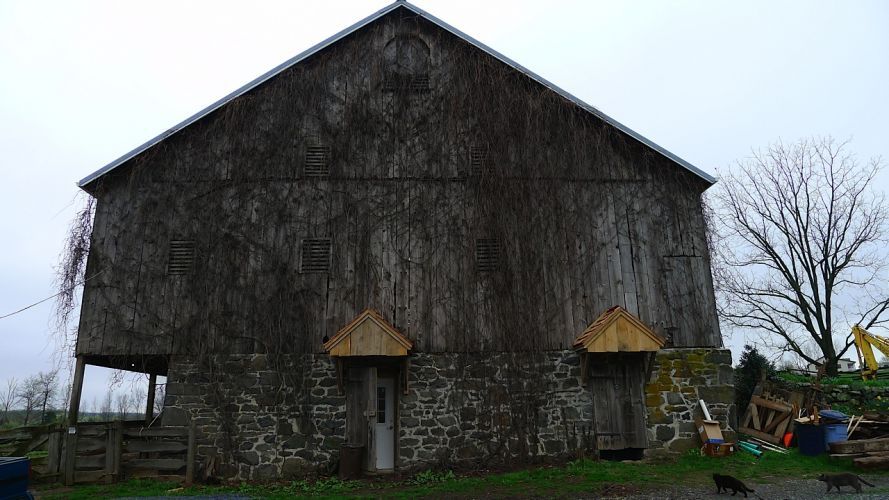 One part of the original email stuck out to me, “My phone records in stereo (who knew???).” This is a common issue with amateur ghost hunters, as many don’t understand how their equipment operates. This lack of understanding often leads to errors and misinterpretations with the use of such devices. These errors, in turn, often become “evidence” in support of paranormal claims, anomalies caused by the ghost hunters themselves. If one takes anything from this article, let it be this: learn how to use your equipment before presenting the results from said equipment as evidence.

I opened the audio file and listened intently via headphones, as suggested. The clip is one minute and fifty seconds long and contains a gentleman asking various questions to the ghosts, such as “Is there anybody here?” and “Is Anna here?” (Anna and Cornelius Houghtelin owned the farmhouse during the battle of Gettysburg). Throughout the recording, one can hear metallic, whisper-like sounds that, with some imagination, could be interpreted as a ghostly voice responding to questions. I’ve heard these types of sounds many times over the years, either while using a faulty microphone or after over-enhancing the audio (over-filtering). I also noted another person (not a ghost) walking around in the background, occasionally conversing with our ghost hunter.

I loaded the audio clip into Audacity, a digital audio editor, and separated the left and right tracks. When listening to the recording in stereo, I immediately noticed the faulty microphones (both of them). The left channel audio was very low, needing to be amplified a bit just to hear the gentleman’s voice clearly. This side (left) also produced many audio pops, the kind one hears when the microphone jack isn’t plugged in all the way. The right channel audio went from being too loud (causing a distortion) to being too low at times. This track also produced audio pops as well, in addition to metallic distortions of sounds both close by and in the background. 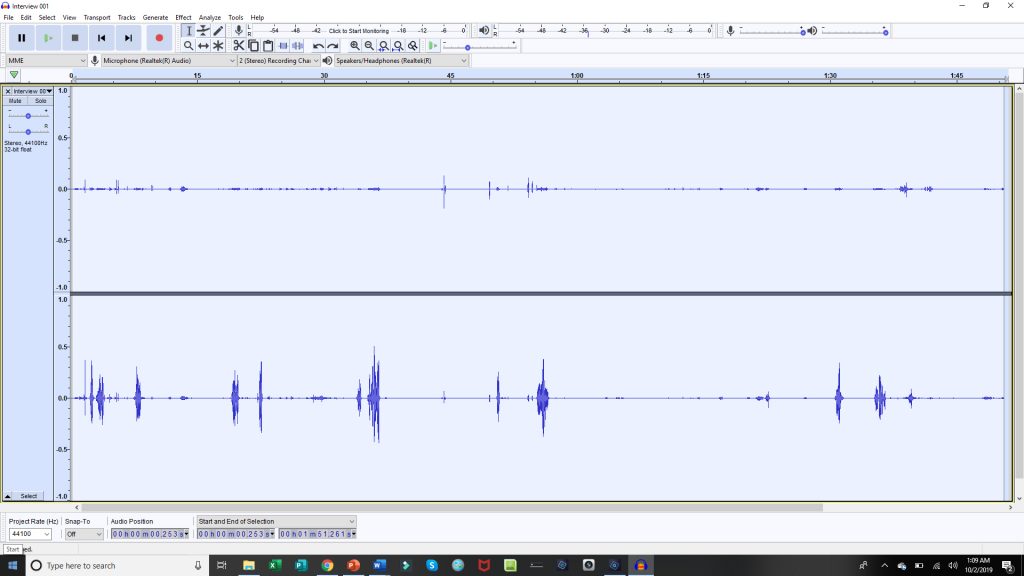 When the tracks were listened to separately, the metallic, whisper-like sounds were more prominent on the right channel. However, when listening to the same sections on the left channel, these noises resembled the swishing/swooshing noises made by the normal friction. From sliding our arms over a desk to our clothes shifting on our bodies (and so much more), we create friction noises that are usually ignored during our daily routines. As an example, lightly move your finger along your earlobe. Go ahead, I’ll wait … . Hear those noises? That’s what happens when devices like your phone’s microphone is within close proximity to your arms, hands, and fingers when they slightly move against other surfaces.

The barn in which the EVP recording was made is used for large events such as weddings, with seating for 140 guests (GettysburgBattlefield.com 2019). There are several large tables (both rectangular and circular) and tablecloths. Setting a recording device down on any of these and resting one’s hands or arms on the tables will produce these types of sound (even without the tablecloths). As I sit here at my desk, writing this article, I produced several recordings via my own phone that have dozens of similar swoosh noises. These subtle sounds, recorded by a faulty microphone, produces the metallic whisper-like effect that can be misinterpreted as a voice (a spooky, sometimes demon-like voice, no less). Once the tracks were separated, the ghostly voices disappeared, and we are left with natural—not supernatural—sounds.

Our ghost hunter had stated he clearly heard responses and listed five of them in his email. Three of the five were “yes” or “yeah” sounds. Quick, short friction or static sounds are often the result of misinterpreted for a “yes” or “no” reply. The other two responses were more complex and deserved a bit more attention. The first alleged response was, “This is Anna’s house.” This was after our ghost hunter had asked if Anna was there, followed three seconds later by “How about Cornelius?” It wasn’t until after I gave Adams the results of my analysis that he revealed what the ghost hunter had originally interpreted. I had not heard the phrase “this is Anna’s house” before (or even after) knowing what was supposedly said. This alleged voice falls into the category of apophenia, which is the tendency to perceive a connection or meaningful pattern between unrelated or random things (Merriam-Webster 2019). The ghost hunter was already aware that a former owner was named Anna and, having just asked about her seconds before, had an expectation of hearing something about her. He likely created the connection in his mind, because the enhanced audio fails to provide the actual phrase.

The second response came after the ghost hunter asked, “Are there any soldiers here?” The interpreted response was “No, friends of the light,” which was thought to be a meaningful response, though the ghost hunter gave no indication of why it might be meaningful. A Google search revealed only three organizations associated with this name: 1) the Religious Society of Friends (Quakers) located in Traverse City, MI (FGC 2019); 2) a religious organization (Quaker Christians) in Birmingham, England (Friends of the Light); and 3) an association of German rationalists from the 1800s (Wikipedia 2018). None of these organizations have any link to Gettysburg or the Battlefield Bed & Breakfast, so this was not a meaningful response (without, perhaps, some tortuous semantic gymnastics). Furthermore, like the rest of the perceived responses, it disappears once the audio tracks were separated and enhanced enough to hear it properly.

All this information, including more from Adams, was relayed to his friend. The response from our ghost hunter was disappointing: “Deep stuff, Bruce. Thanks for digging in … as for me, I’m a believer! AMEN.” This is an excellent example of belief perseverance, which is “the inability of people to change their own belief even upon receiving new information or facts that contradict or refute that belief” (CFI 0219). Despite the information provided by a skeptical investigation and the ability to recreate the alleged EVPs, our ghost-hunter friend chose to “believe” anyway, ignoring the validity issues that Adams and I brought up.

This demonstrates one of the many flaws with amateur paranormal investigation. Experiences that can easily be repeated and verified are not because the person already firmly believes they caught a ghost. The ghost hunter in this case needed only to replicate the experience to realize the faulty operation of his phone, thereby saving himself the trouble of having someone like me investigate it.