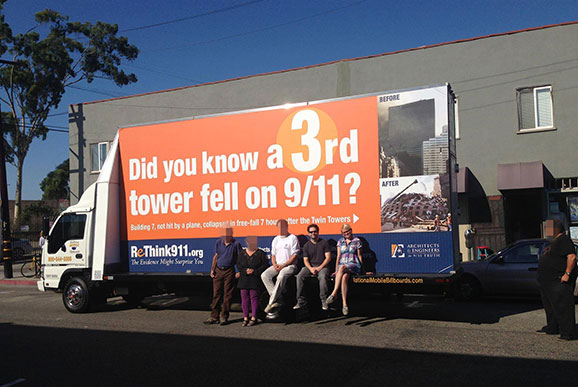 Ross and I are in a coffee shop, on a miserably uncomfortable bench that may have once been a church pew, surrounded by conspiracy theorists who are
yelling at us.

“Do you want your employer to know you have cancer? Or AIDS? Or AIDS?!” yells Abel, the leader of the group, his forehead bulging. Ross has asked him about
digital surveillance. His question barely relates to AIDS, but we’re getting used to this kind of thing. Ross says he wouldn’t want his employer to know if
he had AIDS.

We’ve been going to these “9/11 Truther” meetings for a couple of months now. The Truther movement emerged shortly after the World Trade Center attacks in
2001. Truthers hold that the United States government planned and executed the attacks to create a false justification for the war in Iraq. Here in Los
Angeles, there are two prominent Truther groups seemingly in competition. We have been attending the biggest and most active one. About twenty-five people
attend each meeting. Each one is four to five hours long and mostly consists of Abel showing us YouTube videos and steamrolling conversations. Say, for
instance, responding to a question about surveillance with rantings about employer/employee AIDS relations.

Another issue on Abel’s agenda: his recent tweets to Tom Hanks. He calls his tweets “twitters.”

“I twittered at Tom Hanks,” Abel says, “and asked him why he isn’t calling out Hollywood for covering up 9/11. Now his eight hundred thousand followers
will all see my message!”

The room breaks into applause. Several people tell him he did a good job. A small voice from the back asks, “What’s Twitter?”

When I get home, I check Tom Hanks’s Twitter profile. He has seven million followers. I wonder whom Abel actually “twittered.” 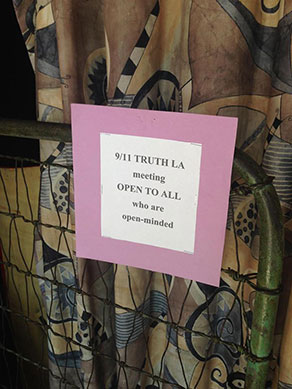 After spending about a dozen hours with these people and watching the three 9/11 documentaries they have given us as homework, Ross and I still have
questions about the September 11th conspiracy stories. The Truthers try their best to field our questions, but their answers sound exasperated. They can’t
believe this isn’t obvious to everyone. And they’ve grown tired of showing 9/11 videos, so the “9/11 Truth” meetings are conspicuously absent of 9/11
truth.

“There’s only so many times you can watch Building 7 fall,” says Abel. Ross and I agree that that’s a good point.

Building 7, a part of the World Trade Center complex that collapsed along with the Twin Towers during the attacks, is key to the Truthers’ argument that
the tragedy was orchestrated by the U.S. government. The DVDs they gave us for homework were full of Building 7. They say Building 7 collapsed exactly how
you’d expect a building to collapse if someone blew it up. To them, this is evidence that the government deliberately manufactured a “false flag” event to
lead us into war. The DVDs are full of barely related details and wild assumptions. We try to broach a couple of them during the meeting.

“The videos mentioned that the World Trade Center was built to withstand a plane crash, but wasn’t it also built in the 1970s, before these kinds of planes
even existed?” I ask, a bit weakly. “Wouldn’t that be part of the government’s explanation?”

“RIGHT!” shouts a fifty-year-old woman across the room, throwing her hands in the air, “They built it to withstand a strike from the strongest airliner at
the time!” She seems to have missed the point, but she’s very pleased with herself. She throws her hands in the air, as if to say, “Nothing could be more
obvious!” It becomes clear that this group has grown so accustomed to incredulity that scoffing is their default. Counterpoints fly past unnoticed.

Two hours later, the room has dissolved into a shouting spree that I cannot follow to save my life (which, at this point, I’m not sure I want to save).
Abel is on a long diatribe about Hillary Clinton: “The Democratic party is dusting off old Hillary’s vagina and waxing it and polishing it up so you can vote
for her because she’s a woman. And we all know how well it worked when they did that for the black guy!”

There’s a murmur in the crowd. Everyone mutters something quietly to him- or herself, ranging from “that’s right!” to “well, I don’t know about that…”

The man next to Ross and me, who is sporting cargo shorts and no shirt, shakes his dreadlocks at us. “They’re just MURDERERS. In a CEMETERY!” he says.

I give him a tiny smile, hopeful that this will end our interaction. Ross visibly pretends not to hear.

I raise my hand again. “I’m sorry. Can I bring this back to 9/11 for a second? I’m new to this, so maybe I’m missing something, but if so few people have
even heard of Building 7, why did the government destroy it? Couldn’t they have achieved the same ends by just destroying the Twin Towers?”

Abel releases an annoyed sigh. Building 7, he says, was full of secret documents. September 11th planning documents, in fact. His voice slows and his eyes
narrow on me. It’s the twelfth hour they’ve spent with us, but they seem to have just noticed us, like a smell creeping through a closed door.

“What’s your background, anyway? What do YOU think happened on September 11th?” asks Abel.

All eyes turn to us. We’ve been found out.

It shouldn’t have been such a surprise we weren’t sold on the theory that 9/11 was an inside job. The previous month, we had introduced ourselves by saying
we really didn’t know much about the Truther movement or about the alternative 9/11 theories.

The rest of the room dutifully clapped for our youth. When we left that meeting, Abel told us to bring “other people, approximately your age and shape” to
the next meeting. We didn’t. None of our friends wanted to spend four hours watching YouTube videos about government surveillance. The next time we
arrived, Abel barely recognized us.

Now Abel is challenging us, asking what we believe. Ross and I have always had a plan for this. If asked why we are there, tell the truth. If they ask us
how we feel, tell them how we feel. If they ask us why we are here in a pointed way that implies “are you reporters?”, admit it. But in this moment, it
becomes clear that this plan isn’t clear at all. How do you know when someone is asking you if you’re a reporter unless they ask if you’re a reporter? I
stammer.

“Um, well, I just wanted to know more. I really don’t know much about September 11th other than the official story…”

“And what do you think now?” asks a man a couple of seats away from me. He has a stern look on his face. If I don’t answer correctly, he’s not going to
like me, which is not an option. It’s very important that everyone I’ve ever met likes me.

“Um, well, I would still like to know more. I’m not entirely persuaded…”

“What about you?” he says to Ross, angrily now. “Do you think the government did it?” 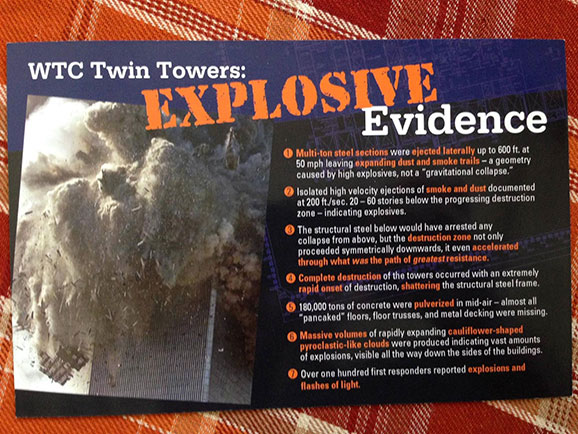 I don’t look at Ross. I am certain that looking at him will somehow prove that we are in cahoots, but staring straight ahead, at the wall, will prove us
independent agents. Everyone else studies Ross.

“I would need to hear more evidence,” he says.

I breathe a sigh of relief. Everyone slowly turns back toward the front of the room, shrugging as if to say “If you don’t want to know the truth, fine.”
But the dreadlocked man next to Ross is still staring us down. You’re not welcome here, he says with his eyes. I go to buy a sandwich.

When I return with a bagel and vegetables, the group has just begun screening a video of Vladimir Putin. It is a very long speech he recently gave, with
subtitles. Abel makes sure to tell us that he doesn’t like everything about Putin, but he likes this. Most of the group is dutifully watching. A few are
lying down on benches along the back wall where they can’t possibly read the subtitles. One is snoring. Time passes so slowly here. I look at my watch.
2:29. I look at my watch again twenty minutes later. 2:34. I go out for some air.

Outside, I kick around some rocks and leaves and call my friend Chris. I get his voicemail.

“Hey, I’m at a 9/11 Truther meeting and it’s SO long, and we’re watching a video of Vladimir Putin, and they are yelling at Ross about AIDS. Call me back.”

On my way back in, someone stops me.

“What’s that?” he says, pointing at the curtain that divides the Truther meeting space and the rest of the coffee house.

“Oh, it’s a 9/11 Truther meeting. Like, questioning the official story of September 11th,” I say.

It is twenty minutes later. They are still watching the Putin video.

When the video is finally over, Abel turns the lights back on just as someone rushes in from the outside.

“Look!” he says, “Outside! The billboard is here!”

Everyone runs out the door, where we find a mobile billboard being towed down the street. “Did you know a third tower fell on 9/11?” it asks.

Ross and I eagerly climb aboard the truck and ask for a group picture. Only a few people join us. The others stand on the sidewalk.

An hour later, we go home. We never go back.