“There’s an app for that” has become a household phrase since smartphones basically became handheld laptop computers. Apps, short for applications, cover a wide range of tasks from managing your finances and editing photos to keeping track of your calorie intake and getting you a ride home. There is an app for just about everything, including adding ghosts to your photographs. These are known collectively as ghost-cam apps.

Ghost cam apps are smartphone applications that place fabricated images of ghosts, aliens, and monsters into any photograph in your phone’s gallery. There have been many cases in which a ghost hunting group or individual investigator attempted to pass off a ghost-cam app “ghost” as the real deal. Some of these apps have used famous movie ghosts (such as the creepy, crawling girl from The Ring film) and extremely well-known “ghosts” (e.g., The Madonna of Bachelor’s Grove) to pull off their hoax (Biddle 2014).

I’ve spent the last decade analyzing alleged ghost photographs/videos and offering logical explanations based on details in the image, what the witness tells me, and my own knowledge and experience. I’ve seen (more than) my fair share of ghost-cam app photos over the years. When they first appeared, these fabricated images were showing up everywhere; graveyards, restaurants, bars, hospitals, private homes, and so on. This craze eventually reached a point where I was seeing new app-generated “ghosts” just about every day.

As the number of these apps increased dramatically, the novelty eventually hit a plateau and began to wear off. The companies producing them lacked creativity; they were recycling the same “ghosts” over with each new app repackaged with a different “skin” (look of the app). Like many skeptical investigators, ghost hunters themselves had become sick of seeing these images promoted as proof over and over again.

Although their use has diminished significantly over the last few years, there are still people who attempt to pass off ghost-cam app ghosts as the real deal. Most of these attempts fall into two groups. First, they are used to support a claim that a location is haunted in order to profit from the claim. Second, they are used to pull a prank on a friend or parent—usually a parent—and occasionally the joke goes too far.

The first group are usually seeking fame and/or fortune, often coming from the owner of a hotel, pub, or business that is looking for a boost in bookings. The idea is that presenting such a photograph will generate increased interest from ghost hunting groups who are willing to spend hundreds of dollars for the chance to investigate such a place. Ghost hunting is a cash cow and once a location gains a reputation for being haunted, their weekends are often booked up quickly with investigation teams paying anywhere from $40 to $100 (or more) per person just to spend a few hours looking for ghosts.

An example of a location trying to benefit from a ghost app came from a friend of mine, Bob Christopher. He is part of a paranormal group that produces a TV series in my local area. He had just wrapped up filming at the Kitty Knight House in Maryland (Christopher 2016) and contacted me for help. One of the owners (at the time of filming) sent Christopher a photo she had taken which, according to her, was proof the hotel was haunted. Christopher reached out to me, asking if I would take a closer look at the image.

The scene in the photograph was of a partial staircase inside the hotel and showed little detail of anything else. It was an uninteresting image, aside from a spooky detail you would quickly notice at the top of the stairs; a transparent image of a woman. She was very faint, but one could see she was facing directly toward the camera, as if posing for the photograph. She also had a melodramatic and cinematic look to her. 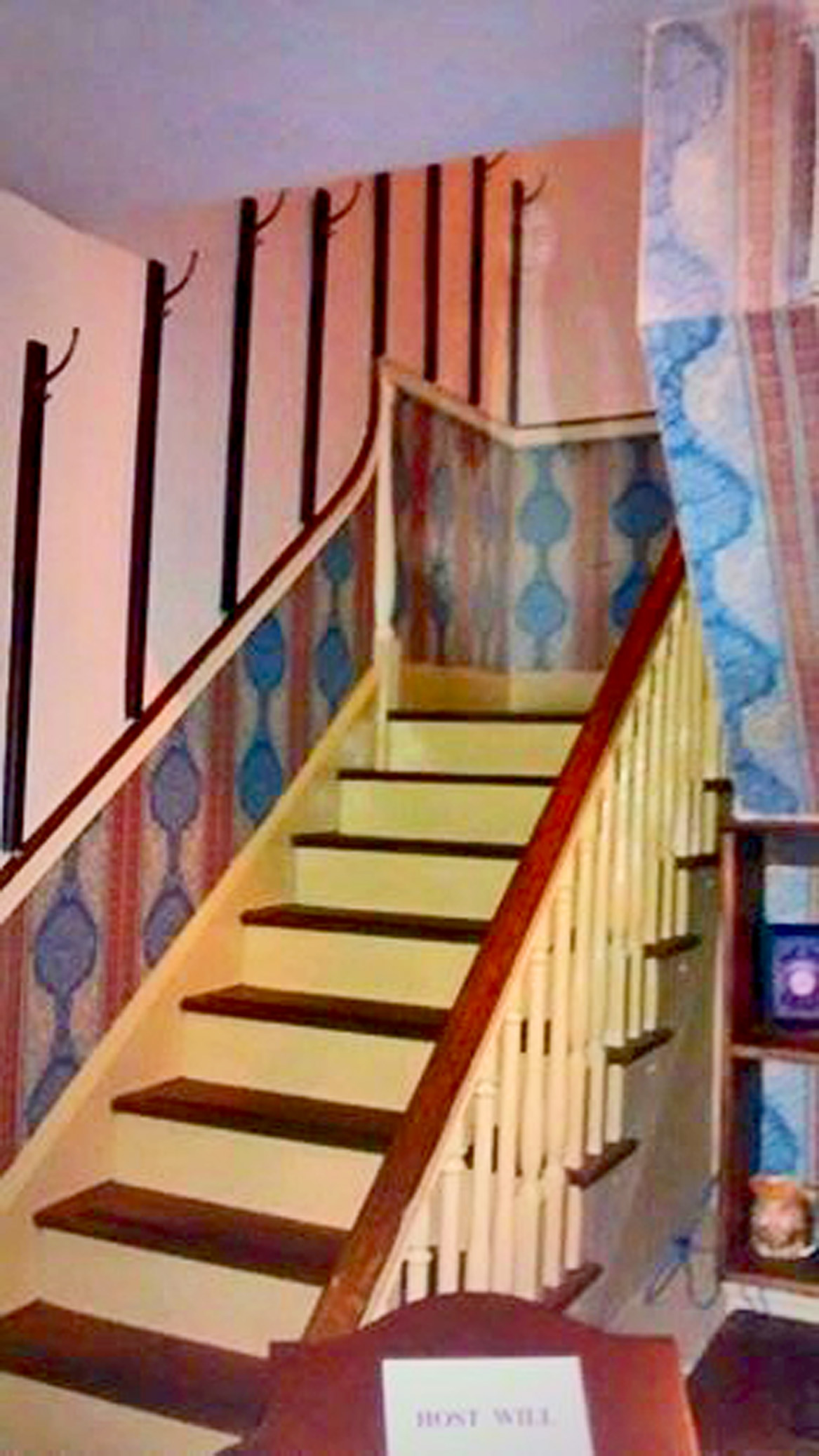 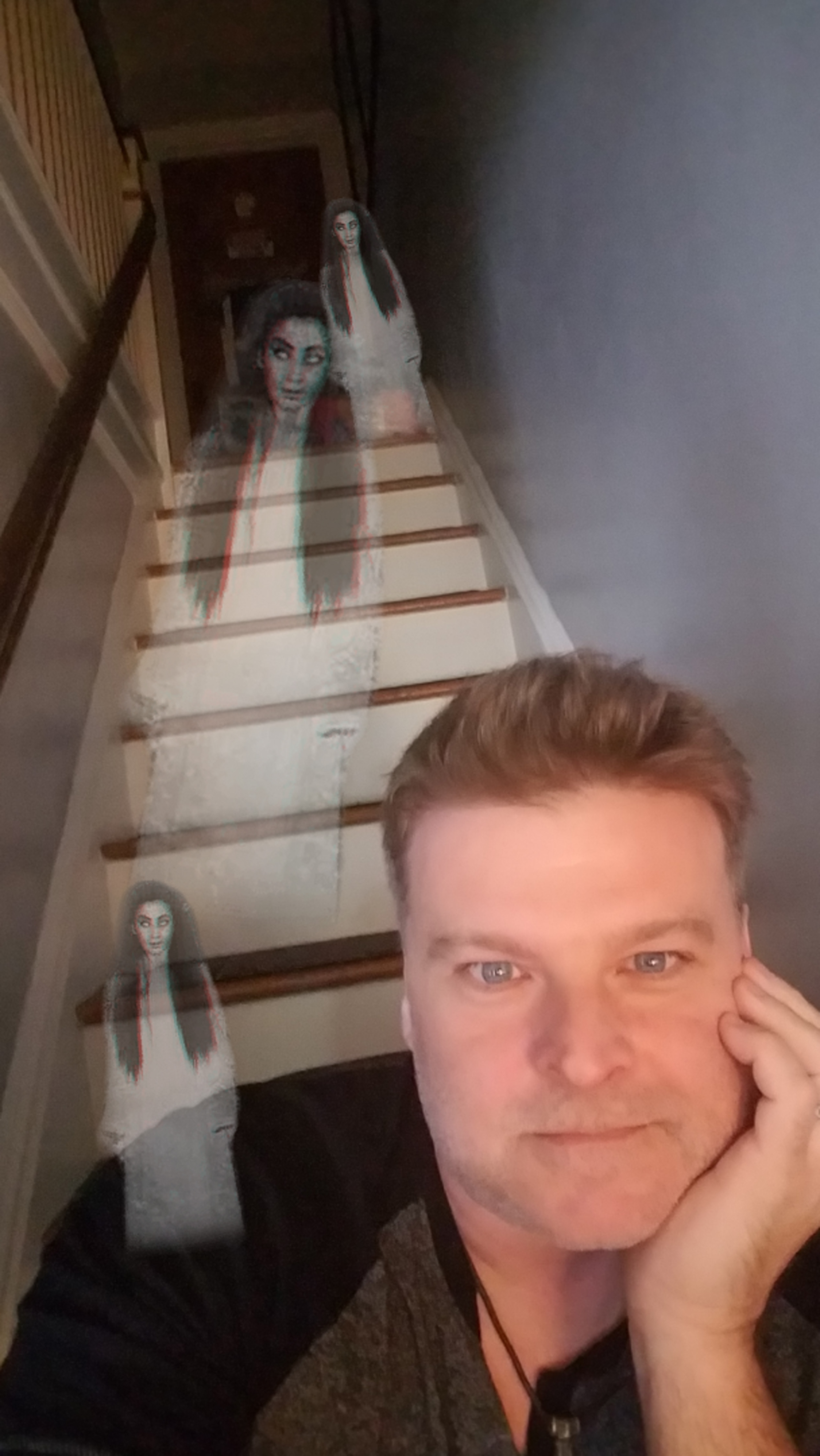 I searched a few databases online, such as “There’s a Ghost App For That” (Sangster 2012), and quickly located the “ghost” in question. The ghost appears in several apps: “Ghost Camera” by Pixoplay It Services Private Limited, “Ghost Camera” by Anoynomous, and others; as I mentioned, companies have become lazy by including the same ghosts in multiple versions of their apps; this ghost was no different. I sent Christopher several images of myself posing with the alleged ghost, which left no doubt in his mind that he was being duped.

In this case, the fabricated photograph was used to bolstering the claim of the hotel being haunted. This deception, in addition to a paranormal television show filming at the location, was no doubt expected to increase bookings of ghost hunters willing to pay-to-play. Unfortunately, the owners didn’t anticipate the ghost hunting film crew to consult a skeptical investigator with a background in photography. When the owner was confronted with evidence of the deception, she became irate and hostile. The deception was made public and any hope of tapping into paranormal-related money became a lost hope. The Kitty Knight House eventually closed on September 11, 2016 (Owens 2016) but reopened under new management on July 5, 2018 (Rodgers 2018).

There’s a second group of people that use these ghost apps to play a prank on family and friends. An example of this came to me via Robyn Blumner, President and CEO of the Center for Inquiry. She forwarded the following email to me (Blumner 2018):

My son took this picture of an abandon building; if you look in the mirror you can see an image of a lady wearing a hood to the left. There’s some history of this person.

The photograph, taken near Ann Lee pond in Albany, New York, shows an overgrown area surrounding a dilapidated building with boards over some of the windows. The image was captured by the driver of a vehicle; we can see the door frame of the driver’s window as well as the side-view mirror. When looking at the reflected view in the side-view mirror, we see a wooded area and what appears to be a transparent white figure. 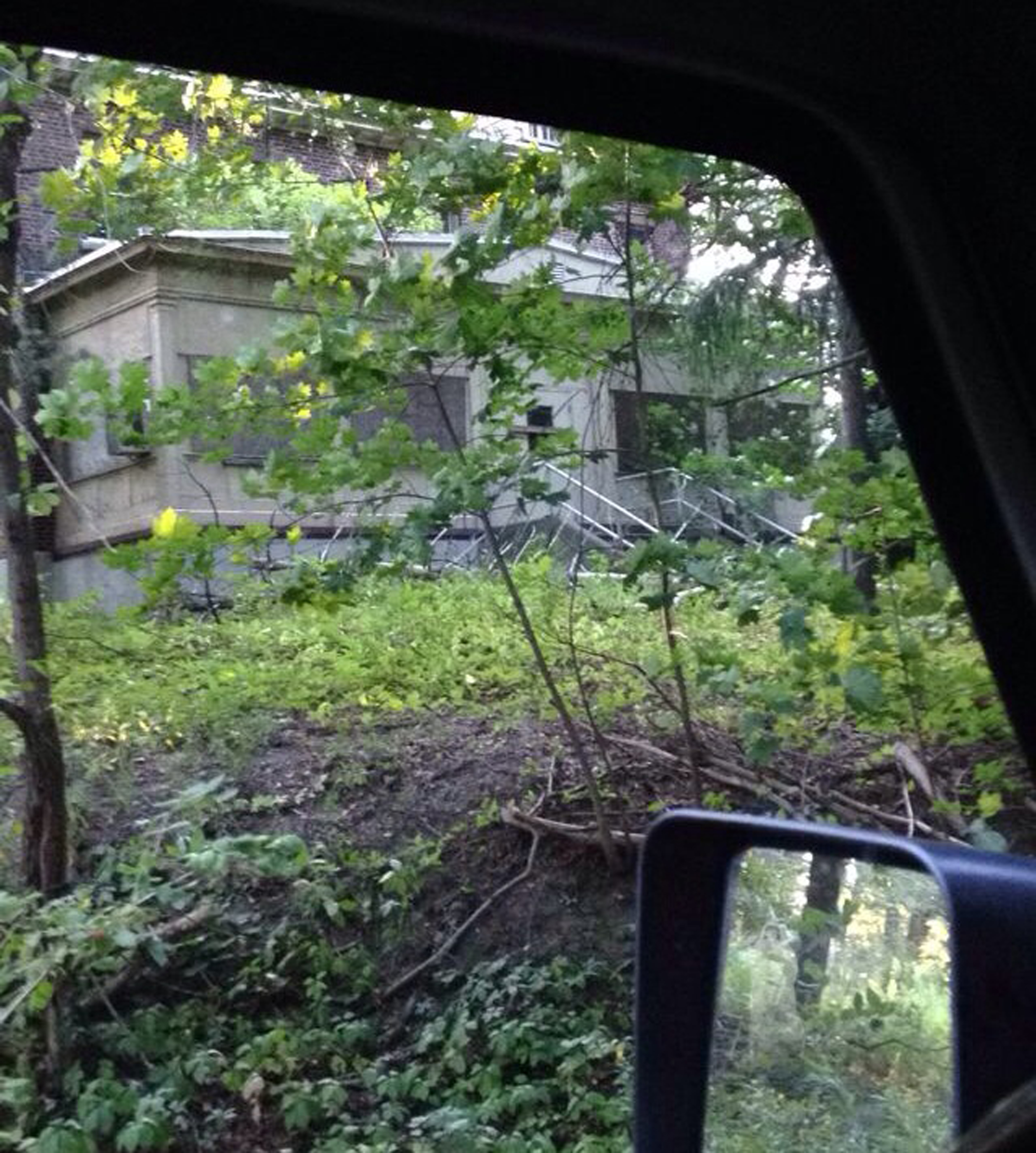 Image allegedly showing a ghost appearing in the side-view mirror. 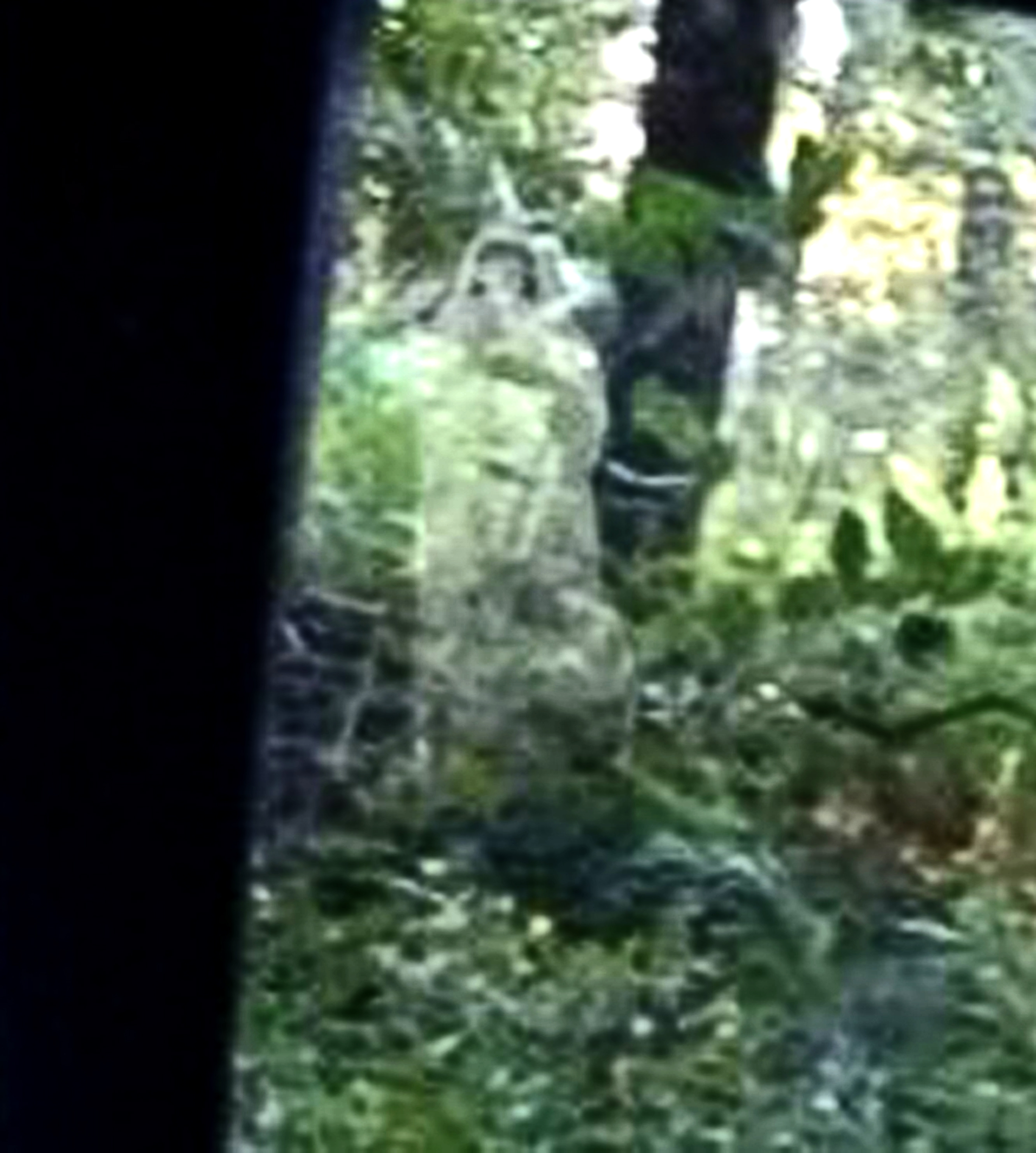 At first I thought there was a smudge on the mirror or perhaps the remnants of bird droppings. On closer examination, I realized it had the familiar characteristics of the popular ghost-cam ghosts I’ve seen over the years; full figure, horror movie look, clear-cut lines, and facing directly toward the camera.

I went straight to the App Store on my Android phone and began browsing the most common ghost apps. It didn’t take long to find one; Ghost Camera Radar Joke by iAppsAndiGames featured this very same “ghost” on their app front page. I quickly put together a side-by-side comparison image with both ghosts; they match up perfectly. 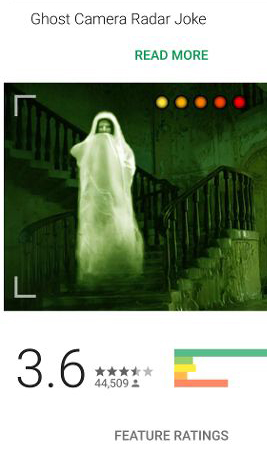 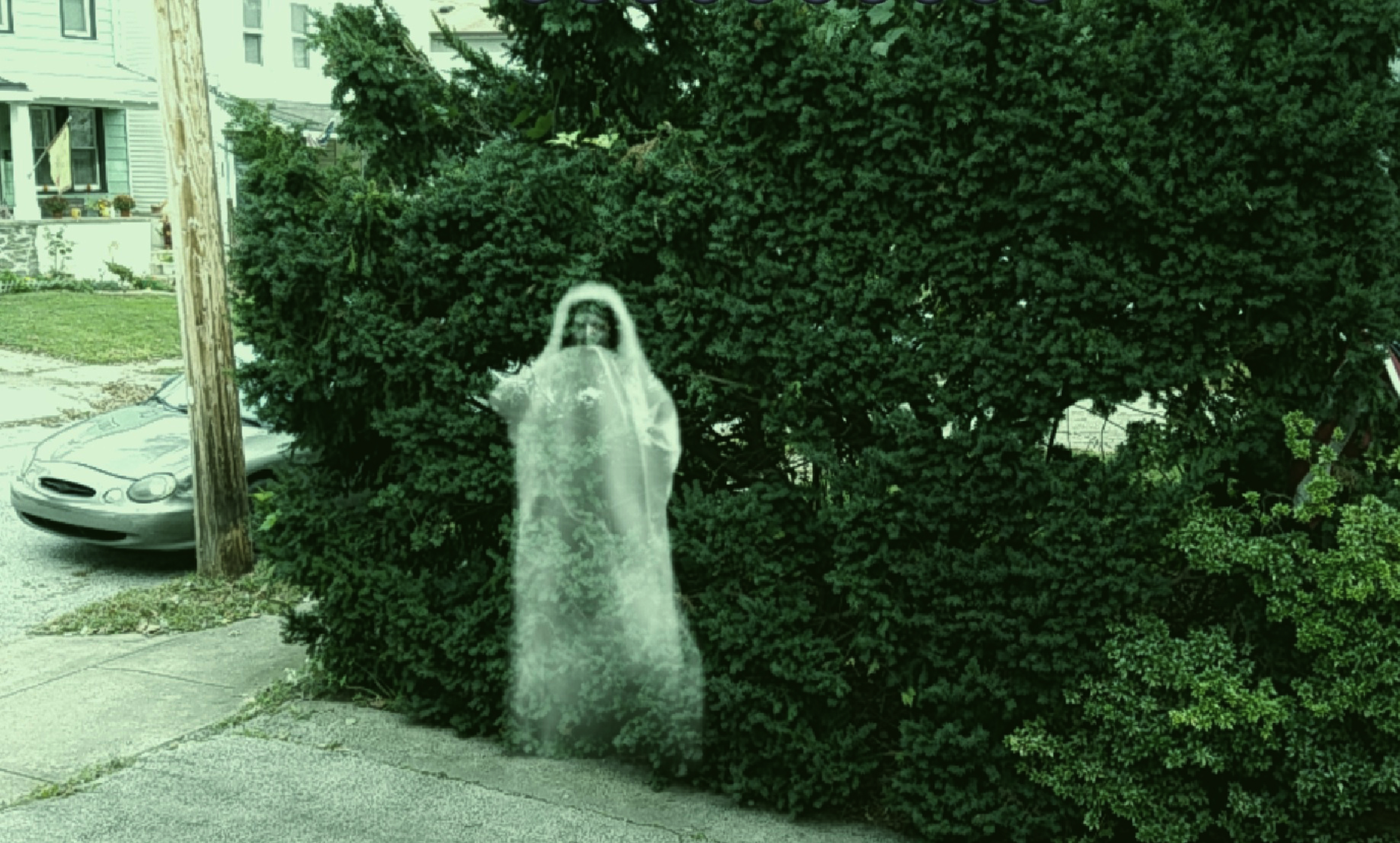 Photo taken outside author’s home with the same ghost.

It is not unusual for kids to prank their parents. In fact, I’ve received dozens of emails such as the one sent to Robyn, usually claiming the son or daughter took a photo and captured a “ghost” in their house. When first suggested that it was a ghost app, parents are often quick to respond with “My kid would never lie to me!” When they are then confronted with the evidence, the conversation usually ceases immediately. Occasionally I receive a response apologizing for being duped by a joke.

In a follow-up email from Mike, he had spoken to his son concerning the ghost photograph. The details of the account changed slightly; it seems it was not his son that took the photo but a friend of the son (one he hasn’t seen in a while). The son reached out to the original person who took the photograph, a man named Kristopher (no last name provided). Along the way, the explanation that a ghost-cam app was used got a little mixed up; the father and son related the explanation to the original owner as “photoshopped” (this has become a general blanket term anytime a digital image is manipulated via software, even if Adobe Photoshop was not the editing software used).

I contacted Mike directly and clarified the explanation I gave was a ghost app, not Photoshop. In addition, I provided several images, so he could see how easily I was able to create the same “ghost” in my own photos.

The bottom line is that ghost-cam apps continue to be used as proof of a haunted location or as attention-seeking devices for those that enjoy making others appear foolish; often for both reasons. Whenever an alleged ghost photograph comes to your attention, be on the lookout for the little details that may expose it as a ghost-cam app:

These are just a few of the things to look for when dealing with a potential ghost-cam app ghost photo. Although their use has decreased dramatically over the last few years, they certainly have not gone extinct. So, keep this in mind whenever you are presented with a ghost photo from a parent or “haunted” location owner: always take a closer look.