At first glance, you might think that Australian artist Alexia Sinclair has produced a photo for a glossy fashion
magazine. The glamorous, fantasy-like image is of three people – but one of them is being inoculated.

It’s an artistic interpretation of Dr Edward Jenner in 1796, and is one of a series for Art of Saving a Life.
The Gates Foundation, headed by Melinda and Bill Gates, commissioned more than thirty world-renowned photographers, painters, sculptors, writers,
filmmakers, and musicians to impress urgency on the global community to reach all children with the life-saving vaccines they need.

The hope is that the works will inspire people to think–and act–on how important vaccines are to modern health systems. 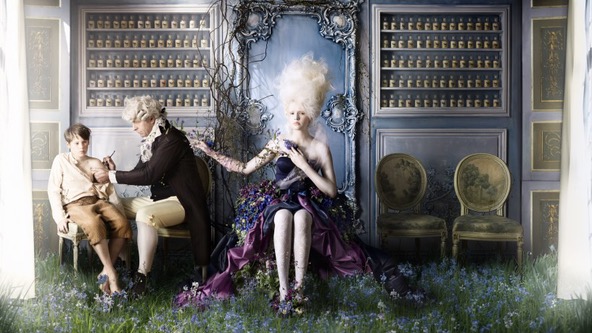 Set in an 18th century English doctor’s surgery, this stunning portrait features Dr. Edward Jenner inoculating James Phipps, the first person to
receive the smallpox vaccine. Dr. Jenner’s pioneering work in the late eighteenth century led to the eradication of smallpox in 1980. Alexia created
and photographed the entire tableaux. The aristocratic woman in the center represents how smallpox did not discriminate, affecting the rich and poor
alike. The many flowers throughout the piece symbolize the global impact of smallpox, and the skulls on every bottle the ephemeral nature of life and
death.

Alexia Sinclair:
I always wanted to be an artist and I didn’t know what type–so like most creatives, I went off to art school and I studied all of the kinds of art you can
do. I just sort of naturally moved into photography and that kind of image making, because I like to create theatrical pieces and the camera became a tool
for documenting the kind of theatrical creations I like to do.

Kylie Sturgess:
They’re very theatrical! When I first saw them, I thought “Ooh, Peter Greenaway!” How would you describe your art?

Sinclair: I find it really hard to describe. It’s a massive process, and I think what I do is not really like a defined thing, as such. It’s changing all the time.
I started out using a camera when I left art school, and then it became all about digital manipulation and I became really obsessed with Photoshop.

Then I moved back to where I started–which was set building and constructing things–before I moved into post‑production. They’re equally difficult. I guess
every time I feel I nailed something, I start to throw something else into the mix. There was a lot of costume making and hand painting things. I’m an
artist, that’s all I can say!

Sturgess: You go all in; it’s amazing. As you said, with the costuming, there’s creation of characters, a certain fantasy element–it’s really quite fascinating.

Sinclair: Yeah, it’s everything combined, and very hands on. Now we’re doing a lot of video as well, and that’s a whole other thing, again. Challenges, that’s
where my desires lie!

Sturgess: How did the opportunity to contribute to saving a life come about? Were you always interested in, for example, vaccine preventable diseases?

Sinclair: I am really interested in them, but it was just fortuitous because I was head‑hunted for it. I’m not verbal about… I don’t sit online and go on to
these websites where people have a rave about how they feel about it. I’m just somebody who does vaccinate, has vaccinated my daughter, and learned a lot
about it.

I do personally feel passionately about it, but I don’t feel like I want to use all of my tiny amounts of time that I have to myself to sit and discuss
vaccines. I like to put that energy into producing a piece of art that allows other people to discuss the issues of vaccinations. It came about because
yeah, I don’t know. I don’t know how they discovered me, but I’m known in certain circles.

We just received an invitation, and we’re living outside of Sydney at the moment, inland, on quite a large area of bush land. This man turned up with a
letter with an invitation from the organiSation. It was really interesting, actually.

Sturgess: I think if I saw something with Bill and Melinda Gates on it, I’d think, “Oh, another Microsoft ad.”, but no, it was a proper invitation?

Sinclair: “Wow, I got a letter from Bill! You know, my mate Bill!” It was really a bit of a moment, it was really lovely.

Sturgess: Are there any particular challenges when it comes to communicating a scientific message via art? What was it like? Brainstorming, thinking about, “How do
I do this right?” What was it like?

Sinclair: Well, I put a lot of thought and research into anything I do, long before. If I’m going to do costuming that’s inspired by another period, then I need to
study that period, fashions and trends, and everything of that period.

It’s the same when they say, “We’d like you to do a campaign on smallpox.” You jump online and you Google smallpox–and you don’t want to have just had your
breakfast; it’s repulsive!

Sinclair: It was a really big challenge, and they said they wanted me to talk about the story of Edward Jenner and his discovery of an inoculation. It was the
greatest killer in the history of the world, and it’s been completely eradicated. It’s a really big, big issue to think about and cover.

Then I said, “Well, I’m not a documentary photographer.” This disease doesn’t exist anymore, so that’s wonderful–and I couldn’t document it, but, also, I
couldn’t show smallpox as a repulsive disease. One, because it’s not what I do as an artist and it needs to sit within the style that I do, and two,
because I think that we see repulsive images all day long and they don’t mean anything to us anymore.

Really, I had a lot of thinking about how I could produce something that had layers of meaning, and allow people to have discussions about what those
symbols within the work meant, and let that story unfold that way.

You mentioned that there are flowers throughout the whole work, and that came about because I discovered that the Chinese referred to all the little
pustules that you get with smallpox as heavenly flowers.

So, there’s a great motif: I can spread all these thousands of little flowers throughout the work, and it will look like the disease spreading throughout
the work. That’s deep!

Sturgess: Yeah, and there’s the actual vaccination going on there with the characters; it’s just so vibrant.

Sinclair: Yeah, there’s the story of how Edward Jenner convinced his gardener to allow him to vaccinate the gardener’s son. It’s this lower class little boy
sitting there, and then there’s Edward Jenner, the middle class, and then the central figure who’s covered in the flowers is an aristocratic figure. That
shows that disease doesn’t discriminate, and disease is something that affects all levels of society.

There’s this story going on, and all the little bottles in the background, they all have a skull with flowers showing life and death, and lots of symbolism
there.

Sturgess: It’s very intricate. Of course, yours is one of a series of works. You’re one of several–not only Australian artists but international–artists
contributing to the project.

Sinclair: Yeah, we’re up there with Annie Leibovitz, so I was happy to get in the New York Times! That’s pretty exciting, lots of really big people. We never have
had any idea who was in it. We knew that there were lots of big people, but we went into it very blindly. I know a lot of people were asking, “Who else is
in and what are they working on?”

I later discovered that we were the guinea pigs, among the very first, and they used our video. I think it’s being released as a thing to follow, so I feel
like we got the really biggest, tremendous disease of all to cover. We threw half a year into the project, and I’m really glad that is being released
because we’ve been bubbling away for a really long time.


Find out more at Art of Saving a Life and the Australian artist Alexia Sinclair at her website www.alexiasinclair.com.