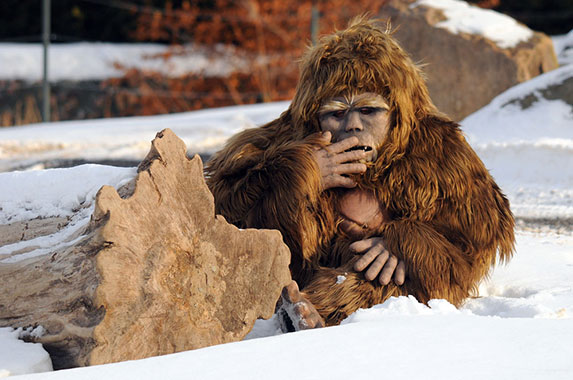 There is a small, elite group of skeptics who know their Bigfootery. That’s right, the Bigfoot skeptics.

Scoff if you will, but skeptical advocacy through talking about Bigfoot and other cryptozoological creatures is an important job. Those who
joke about Bigfoot and how we are wasting our time researching and discussing it must have missed the Internet and popular TV shows lately. Bigfoot is
booming.

Thanks to pop culture making this a hot topic, the public finds it more acceptable—people are talking about it, it has its own TV shows, there must be
something to it.

Bigfoot is arguably one of the more plausible cryptids out there. While he tends to behave a bit supernaturally at times (can’t catch the bugger in real
life or even on camera), a hairy hominoid is not an impossibility—just REALLY unlikely.

I thought it was time to update what has happened in the Bigfoot drum circles in the past year since Melba Ketchum released her astoundingly disappointing
and inept study of Bigfoot DNA. You can read the chronology here. It’s quite a story,
interesting for reason far beyond that of genetics and a new species (a claim which is not justified based on this one highly questionable set of tests).

Ketchum’s credibility faded fast upon the reveal, even though she kept promoting more and more ridiculous events, like the
“Matilda, the Sleeping Bigfoot”
press conference. If the Ketchum team had sought assistance and advice from knowledgeable scientists, they would have been told in no uncertain terms this
is the absolute worst way to appear trustworthy. Science should not be done by press conference, especially if your Bigfoot looks an awful lot like a
Wookie (from Star Wars).

I have digressed. Back to the science of Bigfoot. Yes, there is some, it can be done.

All eyes and hopes in the Bigfoot world turned to Dr. Bryan Sykes of Oxford University in the U.K. who was well underway with the Oxford Lausanne Collateral Hominid Project.
Sykes accepted samples of what was suspected to be an unknown hominid from around the world. Using his special technique to remove contamination and
analyze the inner core of a single hair, he has reached results that have garnered far more weight that the Ketchum results.

Why? Because he had credibility to begin with. Sykes is genuinely interested in the answer, not hung up on a pre-existing conclusion. He has not been
deceptive, or continually feeding us a whiney train of gripes about how the world is out to get him. There were no conspiracies mongered in this case.
There were tests and there were results. It was objective science.

Granted, the Sykes results were documented by Channel 4 in the U.K. Host Mark Evans trekked to the Himalayas, the Pacific Northwest and Russia to tell the
story of these international Bigfoot creatures and examine the background to the Sykes samples. It is not conventional to have a TV program come out before
a paper to announce the findings but camera crews do occasionally follow scientists around to document their important projects. I fully expect the paper
will be forthcoming but that takes time.

The results have been highly interesting but not outlandish. There appears to be a twist on the tale of the Yeti as several threads of evidence, including
two DNA results, point to a hybrid bear as a source of at least some Yeti reports. All the samples from North America, unfortunately, turned out to be not
from Sasquatch. These results were STILL important because they generated questions about the Bigfoot hunters who were certain that they WERE from
Sasquatch. The results from Russia revealed that a local legend of a wild woman (possibly an Almas, another hairy hominid type) is worth investigating
further because she had an unexpected, albeit human, genetic origin.

I was able to watch the Channel 4 three-part series and was extremely
pleased at the quality. The American version edited for National Geographic channel was not quite so compelling due to cuts and voiceovers. Compared to
cryptozoological-themed content from this side of the Atlantic, Evans’s ITV series was smart, measured, fair and dramatic. Excellent stuff.

The Bigfooters didn’t like it. It dashed their hopes for vindication. They had confidence, it seems, that this prestigious project would finally provide
them with the definitive results of an unknown creature. Indeed it did, the Russian and Himalayan results were an unexpected surprise, just not a Bigfoot.

The contrast between the science fans and the science coattail riders is obvious. Sykes’s results do tell us something of great value. When sound science
was applied to the Bigfoot question, the answer was supportive of the null hypothesis—there is no Bigfoot out there. Much else is also supportive of the
null hypothesis which is why the Bigfoot Skeptics are not completely dismissive, but doubtful that an unknown hairy hominid exists. We will remain so until
SOMETHING is worthy of our attention, that's the process of skepticism.

Casts, sound recordings, photos and endless anecdotes will not be enough. A claim that an unknown primate is out there in the North American back woods (or
our backyards, as claimed in some accounts) is extraordinary. That requires robust evidence, no less than a DNA sample that makes evolutionary sense and/or
a substantial piece of the body.

The response from the Bigfoot camp to the Sykes results was curious but not surprising, I suppose. When faced with the fact that they have not come up with
satisfying “proof,” they resolve to try harder. They stood fast in the opinion that the Yeti may still exist. Just because some reports could be bears,
they say, it does not mean they all are. True, but weak. It surely is a setback. Existing evidence they use does not strongly support another mystery
animal. The same excuse was used for the Russian results—it did not dampen the enthusiasm that a Yeren exists in China or that the Almasty was still hiding
in remote areas of Asia. The enthusiastic Yeti researchers who have been promoting Yeti habitat in Kemorovo, Siberia, were crushed. In an example of
cognitive dissonance, they will not accept that their beloved Yeti stories were only folklore or a mistaken identification. I expect they will continue to
promote their life's work until they die.

The sample submitters from North America took the negative results exceptionally hard, but bounced back saying they KNOW the Bigfoot/Sasquatch exists. They
will continue their obviously belief-based quest until they get their Holy Grail. The reactions of some Russian and North American contributors showed that
they only wish to hear verification of their beliefs, not the true answer to what is out there. That these people associate themselves with doing science
is distasteful and wrong. They undertake sham inquiry, not scientific inquiry.

As I said, there is value in any project and there was great collateral importance in this one. Over the past year, many Bigfoot aficionados learned
something about genetics, evolution and DNA testing. They mostly rejected Ketchum's poor excuse for science even though it DID show them what they hoped
(but not entirely), and they walked away disappointed from sound science that didn’t give them what they hoped. I believe this was an exercise in how
science does and doesn’t work.

This scientific attention to the Bigfoot question was a great opportunity to talk to Bigfooters about the scientific process by using a subject they are
emotionally invested in. Even I learned a lot about the methods and procedures, as well as getting an inside scoop from two of the scientists involved. It
was a valuable experience all around.

In a pro-Bigfoot Facebook group, one member cogently pointed out that they need to stop “squatchin’” and start RESEARCHING. Amateurs can use a sound
scientific process but that means they must give up the hooting and howling, the wood knocking, the blobsquatches, and the scare-yourself-silly camp outs
that make zero progress towards the answer to the question, “What, if anything, are people experiencing when they say they have encountered Bigfoot?” In
order to make that shift from sham investigation to genuine inquiry, they will need help from Bigfoot skeptics.