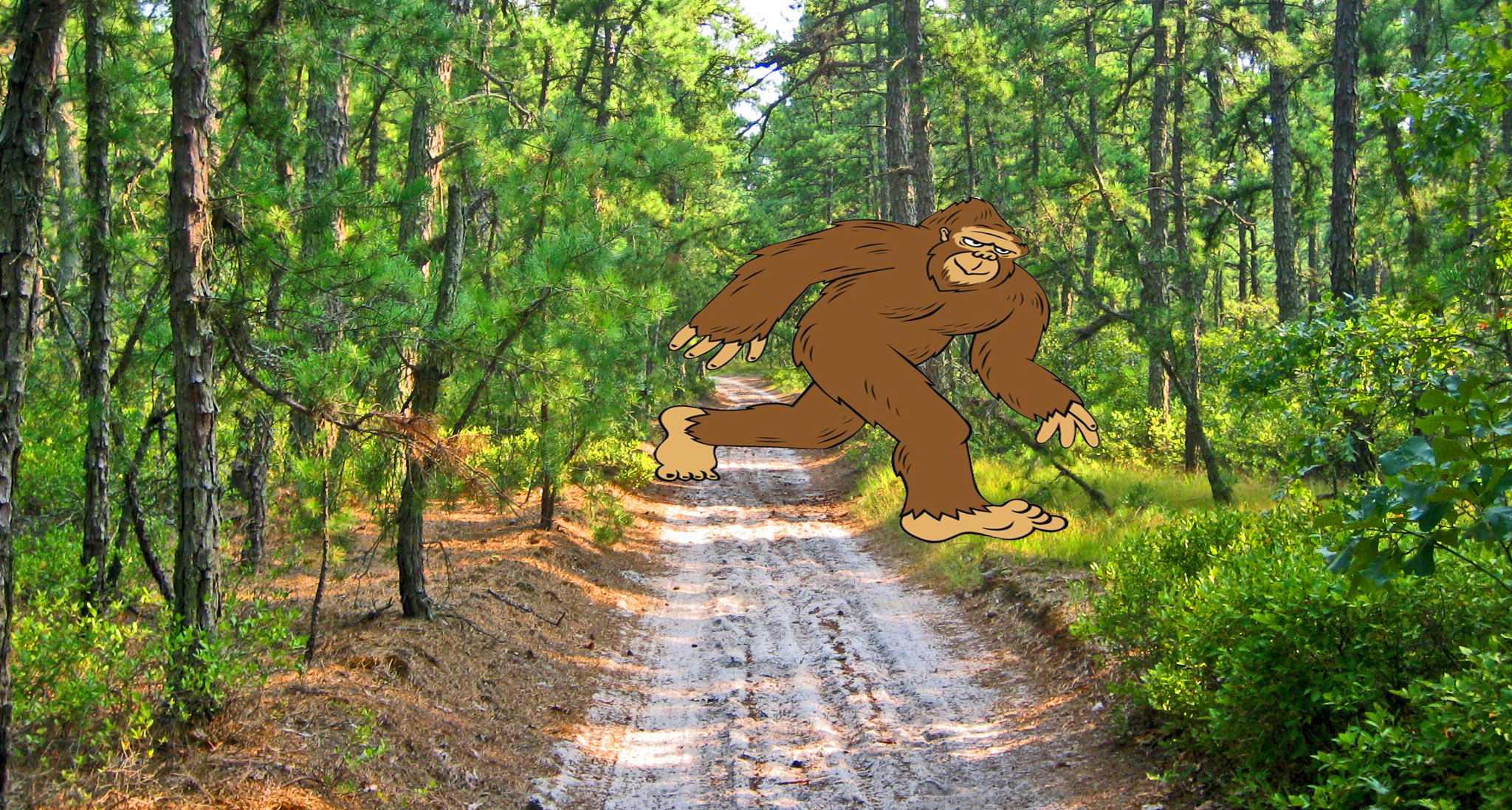 Fox 29 reported on an alleged Bigfoot sighting that took place somewhere in the New Jersey Pine Barrens near Browns Mill in Burlington County. This is a heavily forested area of over one million acres that was designated as the Pinelands National Reserve by Congress in 1978, making it the nation’s first national reserve.

In the report from Fox 29, both in article and video segment formats, an unidentified woman claims:

Whatever this was had, literally, leaped across the entire road. It was about six feet tall. Like a light-colored hair, like a deer, but I’m like it certainly wasn’t a deer because it had its legs splayed and it almost looked like a ballerina leaping across the road. Like, even to this day, I am still trying to process exactly what it was that I saw. It’s just hard for me to fathom it, I guess you could say.

The article goes on to explain that she was off road, and she saw the creature in her rearview mirror.

There are several issues with her statement; first, she provides an approximate height of the creature (about six feet). This is quite a remarkable achievement since she viewed the creature in the rearview mirror while driving off road and with the creature at an unknown distance behind the vehicle. Humans are not good at judging the size of unknown objects at a distance, much less one that is reversed and displayed in a small mirror. Studies that tested perception of size and distance found that errors frequently occur in both children and adults (Hagan and Glick 1977), while children tend to undercompensate and adults tend to overcompensate (Granrud 2009).

Given that drivers usually glance at their rearview mirrors, chances are the witness only had a one or two second (if that) look at the small, reflected image in the rearview mirror (rather than directly at the creature). Furthermore, the witness claims the creature had its legs splayed and “looked like a ballerina leaping across the road.” With the legs spread out and apart, it would be even more difficult to determine the creature’s height, since it was not standing and was in fact airborne at the time.

The witness also states it had light-colored hair “like a deer.” Yet she is certain it wasn’t a deer “because it had its legs splayed.” This explanation does not support her conclusion, since deer are known to leap across fences, gates, walls, and even roads with their legs splayed. A Google search for “leaping deer” will return hundreds of images demonstrating this. In addition, the whitetail deer, known to be present in the Pine Barrens, can leap over fences nine feet tall and across thirty-foot distances when at a run (Big Game Logic 2015). This is more than enough to clear a dirt road, which the witness does mention in her statement.

What really stands out is the witness’s statement that “I am still trying to process exactly what it was that I saw.” She’s not quoted in the article actually claiming it was a Bigfoot, nor does she state this when the reporter calls her on the phone in the accompanying video segment. She clearly states “whatever this was” when referring to the creature, never stating she thought it was a Bigfoot. According to her statements, she doesn’t know what she saw—and that’s as far as it should have gone. Unfortunately, the witness called Eric Spinner, the New Jersey representative for the National Bigfoot Field Research Organization. This ultimately led to the news media covering the story with the sensationalized headline of “Was Bigfoot Sighted in the New Jersey Pine Barrens?” And in the video segment, it is Hank Flynn, the reporter, who claims “she said she saw Bigfoot.”

The reporter then visits with Eric Spinner, who is asked if he found the witness’s claims credible. Spinner responds, “I do, for a couple of reasons. Not only is it uncommon for somebody to report seeing it in their rearview mirror, as she did, but also because they weren’t out there looking for Bigfoot. They were just out enjoying a nice day out in the woods with the dog. Four-wheeling out in the woods. And this happened.”

The fact that someone sees an unidentified animal in their review mirror is not evidence of said animal being a mythological creature such as Bigfoot. All we can gather from this is the witness saw a quick glimpse of an animal in her rearview mirror when she glanced at it while driving forward. There is absolutely no detail in that scenario to which we can extrapolate the report to that of a Bigfoot.

Another reason Spinner finds the story credible centers on the fact that the witness (and her husband) were not out looking for Bigfoot at the time. Instead of lending credibility to a Bigfoot sighting, this only shows the witnesses were (quite appropriately) paying attention to the road ahead of them and having fun, rather than investigating a mysterious creature. There is no mention in the article or news segment that the witness (or her husband) backed up to see what the creature might have been or any further investigation at all. Relying on the idea that “they weren’t looking for Bigfoot” as meaning “credible sighting for Bigfoot” is nothing more than poor logic based on a belief-biased approach to the mystery.

To be fair, news segments and articles are usually edited for time and space, so there may well be further information that has not been made available. Unfortunately, we cannot speculate on what may or may not be … we can only work from the information available to us at this time. There was no immediate further action taken at the time of the sighting to try and figure out what was seen. The Bigfoot researcher accepted the story at face value, letting his biases guide him in concluding the story was a credible sighting of Bigfoot. However, based on quotes from the witness, the most likely conclusion is that she caught a quick glance of a deer leaping across the road. The experience happened too fast for her to understand what was seen, and the media sensationalized the story.

The bottom line: we have a plausible idea of what she saw, but we just don’t know for sure. Until new information comes to light, that’s the only conclusion we can come to.