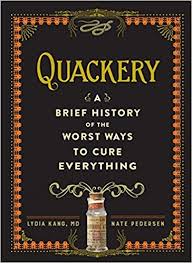 Lydia Kang, MD, and Nate Pedersen have written a delightful new book, Quackery: A Brief History of the Worst Ways to Cure Everything. Histories can sometimes be a bit dry and boring; this is anything but. It’s a page-turner. The authors ferreted out some of the most disgusting and ridiculous things people have subjected themselves to in the pursuit of health. They are fond of the yucky and the shocking. They have a great sense of humor, albeit rather morbid and decidedly irreverent. It’s easy to see that they had fun writing this book, and they want to share that fun with their readers. Readers will alternate laughing and exclaiming “Wow!”

They point out that quackery is a tribute to the incredible power of the human desire to live. “We are willing to ingest cadavers, subject ourselves to boiling oil, and endure experimental treatments involving way too many leeches, all in the name of survival.” And this same drive has led to incredible innovations such as anesthesia for surgery. The trick is to figure out what works and what doesn’t. Quackery lingers on, and there are surely more “worst ways to cure” still to come. The book deals with the history of quackery, but new quackeries arise every day.

I already knew quite a lot about quackery; and in these pages, I revisited many quacks I have written about on the Science-Based Medicine blog, including Dr. Batmanghelid and his water cure, Linda Hazzard, who starved her patients to death and robbed them, John R. Brinkley with his goat gland transplants, and Walter Freeman with his ice-pick-through-the-eye lobotomies.

The book includes one of my favorite stories about the only doctor to ever have a 300 percent surgical mortality. During a too-hasty amputation procedure on an unanesthetized patient, his scalpel took off several of his assistant’s fingers and slashed the coat of a bystander. The bystander died of fright, the assistant died of infection, and the surgical patient died of post-op complications.

In addition to colorfully describing quackeries I was already aware of, the book covered many that were new to me, and it provided obscure facts and tidbits about celebrities.

Hitler’s doctor prescribed a quack remedy (Dr. Koester’s Antigas Tablets), and Hitler took it for nine years at the rate of eight to sixteen tablets a day. He was inadvertently consuming near-lethal doses of strychnine, which may have contributed to his erratic behavior at the end of WWII. He also used chamomile tea: not to drink but for enemas.

Einstein was lured into trying Wilhelm Reich’s orgone box but quickly lost patience with both the box and Reich’s theories. There are pictures on the Internet of Kurt Cobain sitting in an orgone box. William S. Burroughs, the author of Naked Lunch, built his own orgone box and spent many hours sitting in it. Britain’s Maggie Thatcher took “electric baths” as part of an elaborate health and beauty routine, at a cost of £600 per treatment.

Novelist Upton Sinclair promoted Abrams’ “radionics,” calling it “the most revolutionary discovery of this or any other age … the great secret of the diagnosis and cure of all major diseases.” When finally opened, Abrams’ Oscilloclast machine was found to contain a useless jumble of electrical parts, “the kind of device a ten-year-old boy would build to fool an eight-year-old boy.” Radionics practitioners offered to diagnose from blood samples sent through the mail. The AMA sent the blood of a healthy male guinea pig, saying it was from “Miss Bell.” Miss Bell was diagnosed with cancer, an infection of her left frontal sinus, and a streptococcic infection of her left fallopian tube. The caption for a picture of Abrams and his Oscilloclast reads, “Albert Abrams looking like a doctor as he manipulates a totally bullshit machine.” Kang and Pedersen don’t mince words.

A Cornucopia of Quackeries

The grape cure for cancer: fast, use enemas, then eat seven meals of grapes every day for two weeks. Nose writing to improve eyesight: Aldous Huxley recommended imagining your nose is a pencil and then writing an imaginary signature in the air with your nose.

Roland Hunt wrote a book explaining cosmotherapy, claiming that blue tinted water called Ceruleo could cure dysentery, cholera, and the bubonic plague. In referring to his “readers,” Kang and Pedersen comment, “assuming there was more than one.”

In Mesmer’s heyday, before his “magnetic healing” was debunked by Benjamin Franklin and the French Academy of Sciences, he became a wealthy man. They say, “Like so many quacks before and after him, as Mesmer’s bank account grew, his moral commitment to advancing medicine shrank.” I can think of quite a few people that applies to today.

The caption for a picture of one quack reads, “Dr. Fouquier taking a break from poisoning patients.”

Breatharian Wiley Brooks claimed to eat only when there was no fresh air to breathe or when he couldn’t get enough sunshine. He said humans needed no other nourishment “except for a Twinkie, a Slurpee, and a hot dog from 7-Eleven, all of which were seen clutched in Brooks’s arms by an observer in 1983.”

Victorian doctors gave pelvic massages to female patients to produce “hysterical paroxysms” (a euphemism for orgasm). Then do-it-yourself vibrators were invented, becoming the fifth electrical appliance introduced into the modern home after the tea kettle, sewing machine, fan, and toaster.

Ground-up human mummies were used in a variety of medicines; it became such a big business that England levied a mummy import tax.

Pliny the Elder recommended putting the right foot of a hyena on a pregnant woman to help with the delivery. Not the left foot: that would cause death.

Tobacco is the deadliest plant known to mankind, responsible for more than 6 million deaths a year worldwide. But tobacco has been widely used as a medical treatment. Leaves were smoked to cure the common cold, and smoke was blown up a woman’s vagina to relieve the pain of labor. It was even said to cure cancer; pretty ironic considering that seventeen people will die from smoking-induced lung cancer in America in the next hour alone. It was even added to toothpaste. Tobacco toothpaste is still sold in Southeast Asia. But the title of worst toothpaste ever should probably go to the radium-based toothpaste sold in the 1920s. (Do your teeth glow in the dark?)

When leeches were popular, leeching chairs were available with a hole in the seat area to facilitate application of leeches to the anus. When a leech was re-used after treating a syphilitic patient, it transmitted syphilis to a child. One doctor applied a whopping 130 leeches to a man’s testicles to treat gonorrhea. He must have had large testicles to make room for them all.

Quackeries tend to persist. Did you think bloodletting was a Medieval practice? It’s still regularly used in Unani, a Persian-Arabic branch of medicine. And California had to ban bloodletting by acupuncturists in 2010.

Why do so many people believe the ridiculous claims of quacks? “… When scholar after scholar insists that ‘it works because I heard it works,’ then people believe it. Ah, the power of the anecdote!”

Sometimes crazy-sounding things do actually work. What about drinking the urine of an impregnated mare to relieve post-menopausal hot flashes? That may sound like quackery, but it’s the basis of the drug Premarin.

There are plenty of graphic illustrations (many in color) and interesting sidebars. In the section on quack surgeries to implant animal testes in humans, there is even a sidebar with the recipe for a Monkey Gland Cocktail (no actual monkey parts, just gin, orange juice, grenadine, and absinthe).

I highly recommend this book. It is an excellent, informative history of how people have used weird, sometimes repulsive, and often dangerous treatments that didn’t work; and it’s highly entertaining to boot. It will tell you more than you ever wanted to know about “the worst ways to cure everything.” Readers may gasp in horror and retch or lose their appetite, but they are more likely to roll on the floor in convulsions of laughter. If laughter is the best medicine, this book is good therapy. It’s a hoot. Maybe even a hoot and a half.