Investigating alleged ghost photographs and offering rational explanations for them has been a focus of mine for well over a decade. I’ve hosted workshops to explain the various causes for “ghosts” and other alleged paranormal entities that seem to appear in photographs and videos. So when I came across a paranormal event advertising a speaker as “The Ghostographer,” I decided to take a closer look.

Tim Scullion was a featured speaker at the Maryland Paranormal Conference at which he was scheduled to present a slideshow of his best (ghost) photos, many of which are featured on his blog and in his book Haunted Historic Williamsburg, Virginia with Breakthrough Ghost Photography, described as the “world’s first photo study of ghosts” on his Facebook page. Although I wasn’t able to attend the conference, I did order his book with anticipation for the “breakthrough ghost photography” it advertises. Scullion describes himself as a photographer, author, and a musician, who has bachelor and master’s degrees in education from the College of William and Mary.

While waiting for the book, I browsed his blog, which features dozens of images that Scullion claims are ghosts. Long exposures seem to be the technique of choice, evidenced by motion blur, use of ambient light (no flash) in low light environments, and even examples of light painting. Light painting is a technique in which a light source (such as a flashlight) is used as a “paint brush” to paint designs or words with light during a long exposure. Ghost hunters often accidentally get this effect when they turn the camera flash off, causing the camera to take long exposures. Any background lights or other ghost hunters who are carrying devices with lights can cause streaks of light to appear in photos.

Scullion also presents artifacts apparently produced by lens flare as evidence of ghosts, referring to them as orbs. Scullion ignores the fact that in many of the images a line can be drawn (with a ruler) from the “orbs” straight back to an overexposed light source (such as a porch light or street lamp). Another clue attributing the artifacts to lens flare and not ghosts is the shape of many of his orbs: they are hexagonal. This is a common sign of lens flare and is caused by light that reflects off the inside edges of the lens aperture.

Scullion attempts to justify his claim that the lens flare artifacts are ghosts with a blog post titled “Lens Flare…Or Ghost?” He states, “According to just about every professional photographer, the odd shapes of light that I photograph are the result of a lens flare, and that I should immediately dismiss them as inconsequential and move on. But until I can get a thorough, scientific explanation that debunks anything paranormal, I have to dismiss the lens flare explanation of these light anomalies. Why? If my camera is stationary (on a tripod), by the definition of a lens flare, it (the lens flare) would not move nor would it shape-shift!”

He assumes, for reasons that are not clear, that paranormal claims have never been explained by natural causes (that is, debunked) when in fact many have. He also dismisses the lens flare explanation despite hundreds of photography resources (books, websites, tutorials, and photographers) that provide precisely the explanation he claims doesn’t exist. In the specific blog post where the above quote appears, he offers three images to support his claim of “If my camera was stationary, it (the lens flare) would not move nor would it shape-shift.” This is where we see Scullion’s misunderstanding of how science works come into play, especially when it comes to controls. Rather than taking multiple images consecutively from the same angle using the same camera without moving the camera/tripod, he changes multiples variables with each image.

Scullion offers these three images in support of his claim that lens flare artifacts are indeed ghosts. He failed to apply proper controls; he took the images at different times of the year, different angles, different lighting conditions, and different cameras.

The three images were taken months apart over the course of a year; the first in the winter of 2013, the second in summer of 2013, and the final one in the winter of 2014. The camera was in a different position each time, which changed the angle of the images, thus changing how the light entered the lens. Speaking of light, notice the light in the windows; the interior lights change in each image, which adds to the lens flare effect (especially in the right-hand image). Finally, a different camera was used for the third image—a camera modified to allow more infrared and ultraviolet light to be recorded on the image (typically mislabeled a “full spectrum” camera). This was far from a controlled experiment.

Another blog post caught my attention. Titled “Gettysburg: A Gathering of Ghosts,” it describes Scullion’s trip to Gettysburg and a particular apparition he caught on camera while visiting the area of Little Round Top. He states, “Seconds later I picked up a white figure near the trees, and in the nest photo part of it turned navy blue—indicative of a Union uniform. As I went to jump from one boulder to another to possibly get a better photo of the figure, I saw a dark shadow move into the trees from the path.” He provides two images of the apparition, both of which are cropped down to only the figure. 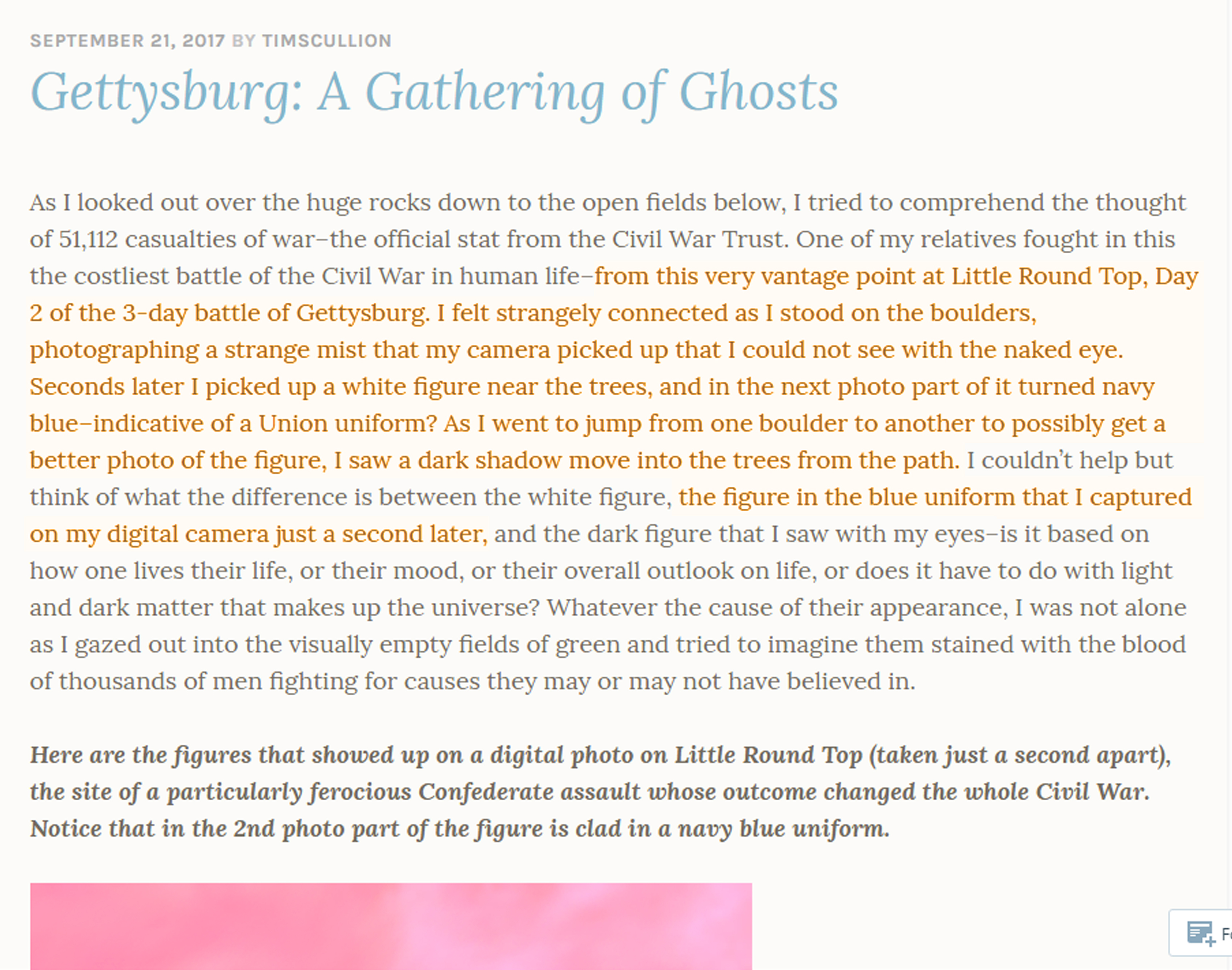 Screen capture of Gettysburg: A Gathering of Ghosts blog post, before it was removed. 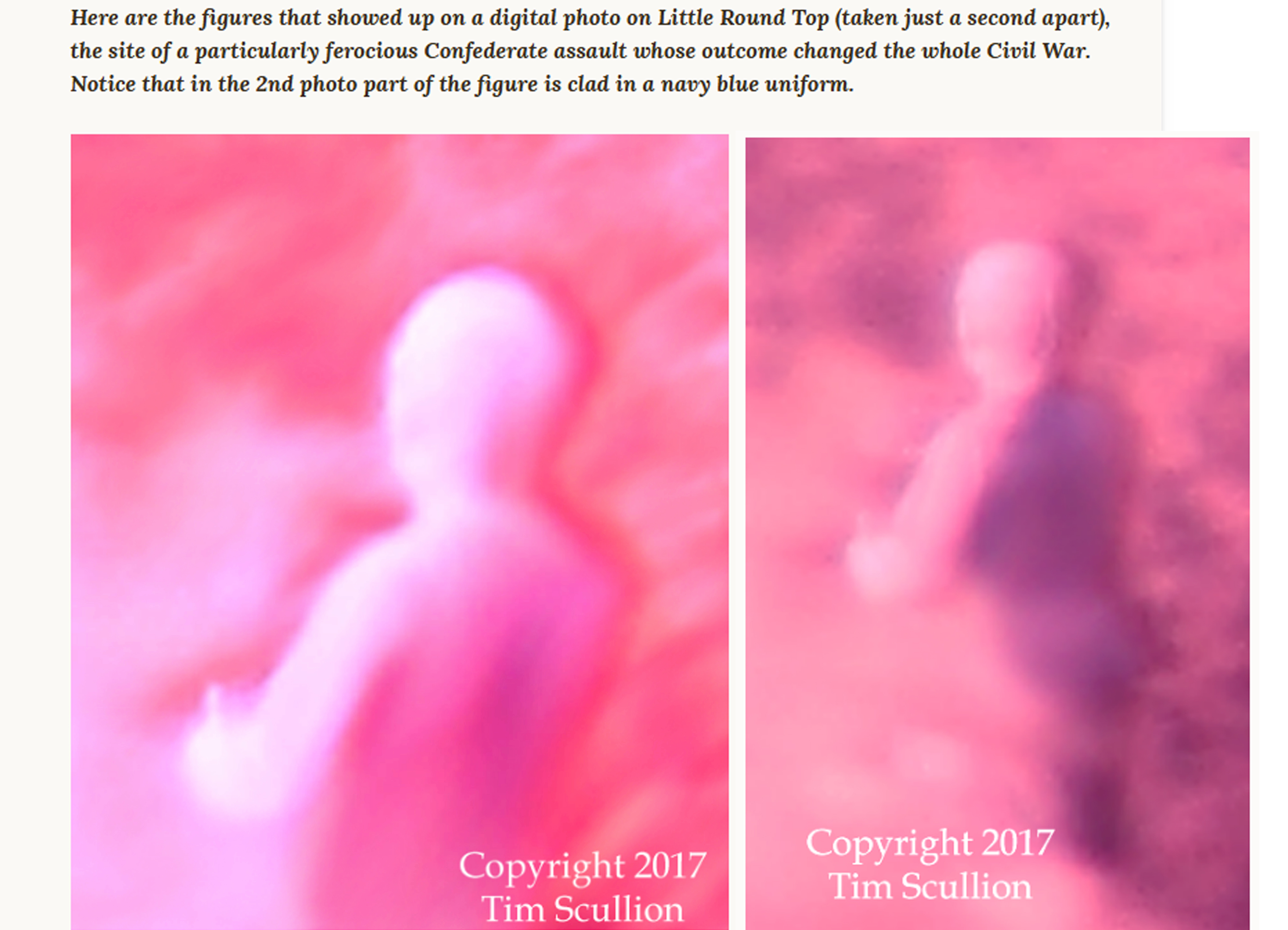 Two photos Scullion claimed to be that of an apparition. In reality, this is a statue of a soldier on top of a monument to the 155th Pennsylvania Volunteers.

It didn’t take long to see an obvious explanation for the white/navy blue figure he presents as an apparition: it’s a statue. That’s right; it’s a statue of a soldier atop the monument to the 155th Pennsylvania Volunteer Infantry (dedicated on September 17, 1886). It’s a monument I’m quite familiar with from dozens of my own visits to the area. The monument is quite tall, rising over fifteen feet (closer to twenty if you include the boulder it sits on). The monument is also easily visible from most of the immediate area of Little Round Top and the fields below it. It’s out in the open, making it a mystery how anyone could sincerely mistake it for a ghost—especially in broad daylight.

I contacted a friend and resident of Gettysburg, Andy Keyser. He was kind enough to head over to the location and locate the same camera angle to replicate Scullion’s “ghost.” He was able to easily duplicate the image, and when compared side-by-side, there’s no question this mystery is solved. 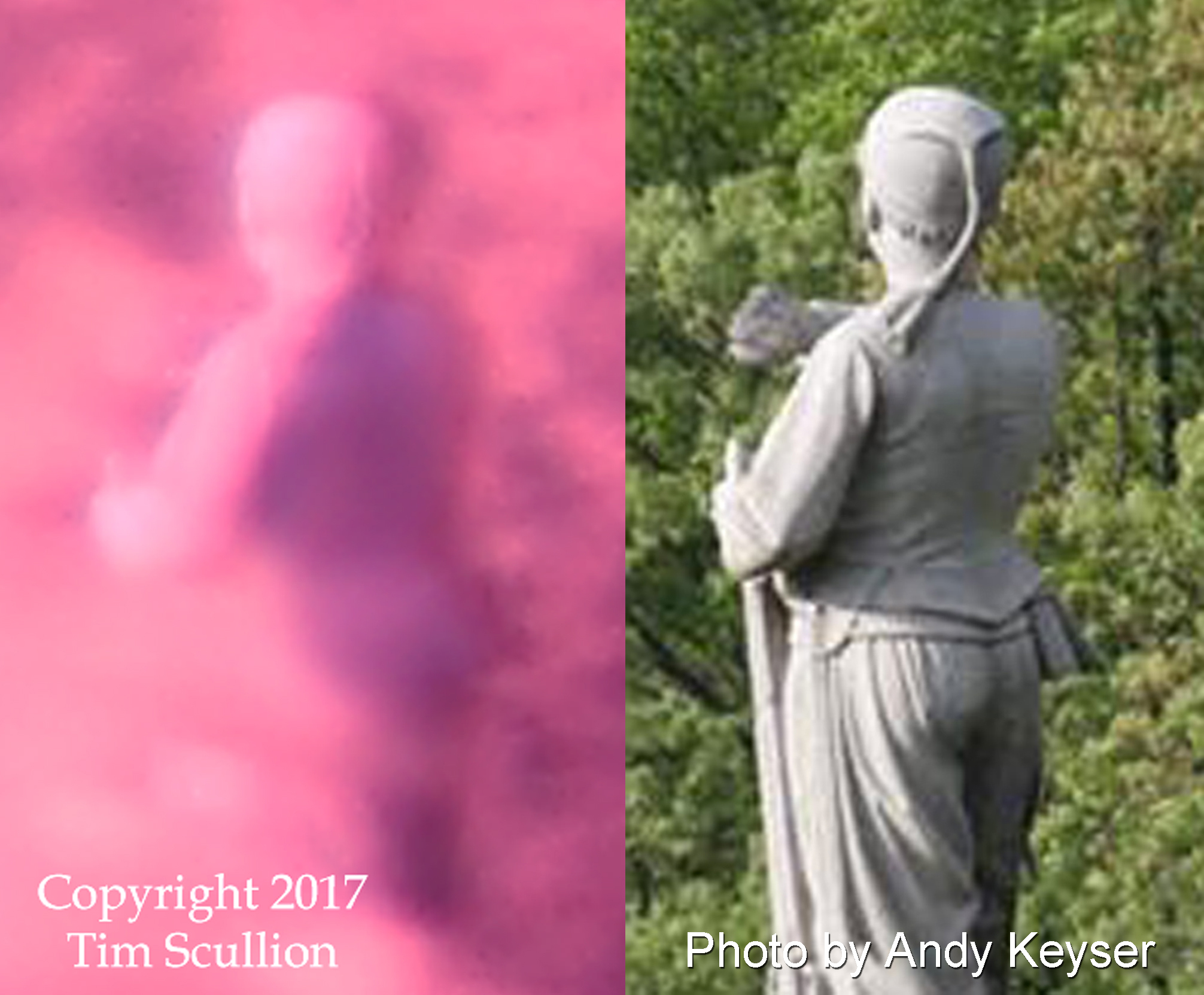 On the left is Scullion’s alleged ghost. On the right is Keyser’s replicated image at the same location. 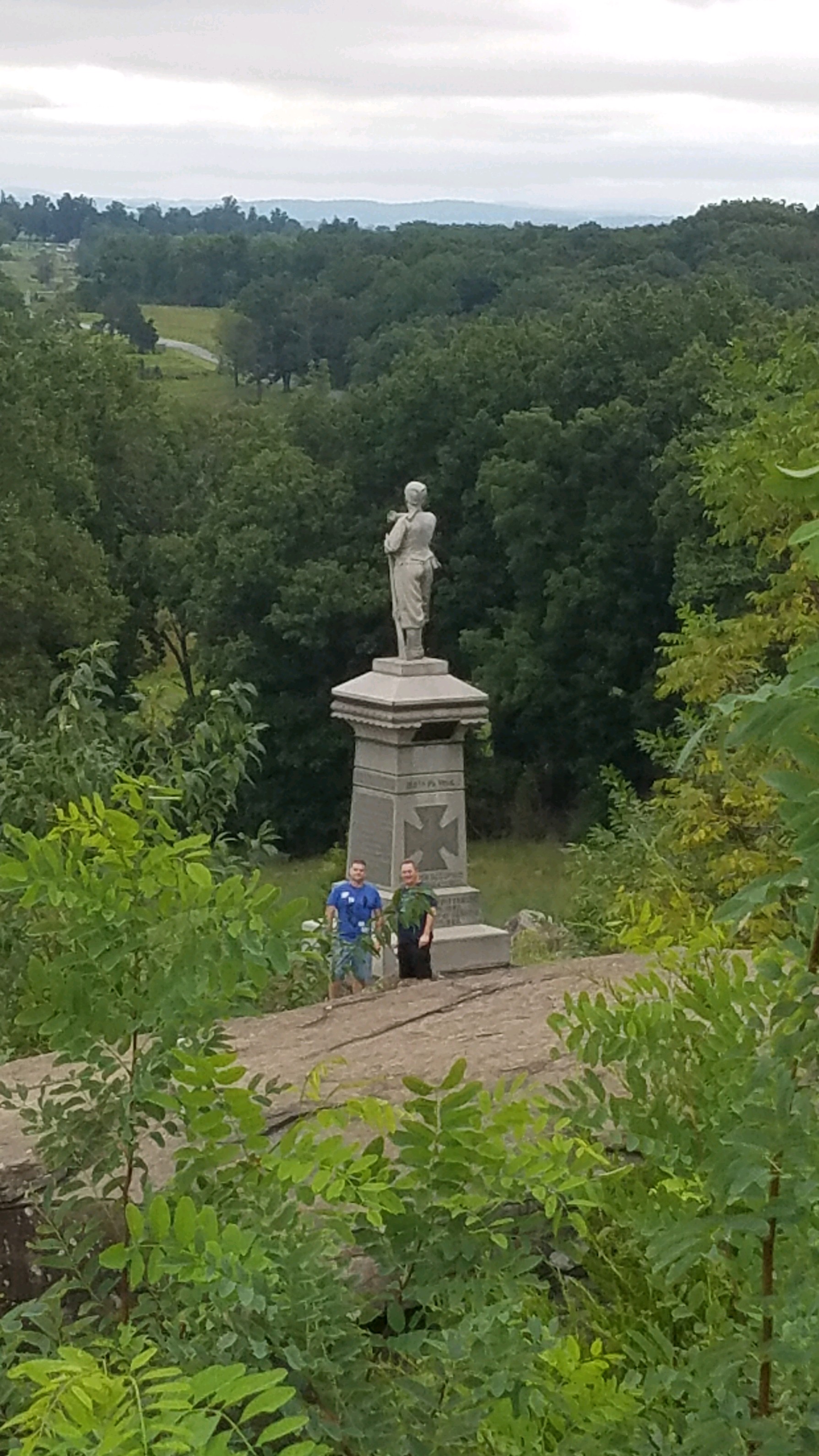 Kenny Biddle and Andy Keyser in front of the 155th Pennsylvania Volunteers monument.

Looking through more images on his blog, I found many faces, most of them appearing in window panes from various historic sites and a few appearing in fog or mists. There’s a common theme: They are not actual human faces such as in a photograph (or real life). They appear to be paintings and/or chalk drawings that have been edited into the photos. The faces share an artistic style, the proportions are slightly out of proportion and/or irregular, and it’s painfully obvious they are artwork…not ghosts.

In one image taken at a beach, image noise (known as grain in film cameras) is apparent in several of his ghost images due to the low-light environments. However, closer inspection of the close-ups Scullion provides reveals the image noise is absent only where the faces appear. It looks like he simply took blurry faces and overlaid them onto the photo of the beach, forgetting about all the digital noise that would still be evident over the faces if they were actually there when the photo was taken.

An image Scullion took at a beach showing several extra faces floating around. In the close-up on the right, the distinctive image noise is absent wherever the faces were added.

A few days later, his book arrived and it was, not unexpectedly, a disappointment. It was packed with over 200 photographs, including what seem to be long exposures, lens flare, dust particles, and paintings/drawings inserted into images. It claims to be a study in ghost photography, but it appears to be a mixture of poor photography methods, ignorance of science, simple replication methods, and some fabrication of apparitions.

I reached out to Scullion via his blog on June 8, 2018. I related that I was working on an article about his work and wanted to ask him a few questions to clarify some concerns. He agreed, responding, “I would be happy to answer any questions that I can.” The next day I addressed some of the issues I’ve covered here in a polite and professional manner. I even offered to travel down and accompany him on one of his excursions to observe his techniques and see the images he captures just after they’re snapped. If he truly had “breakthrough ghost photography,” as he boldly claims, I wanted to see it and help promote it. Over a week passed without a direct response, though I did notice that his Gettysburg post—the one with the alleged ghost of a Union soldier that was obviously not the ghost of a Union soldier—was suddenly removed from his blog without comment.

I’m disappointed in the lack of response from Scullion. He had a chance to address fair questions and defend his claims, but instead decided to quietly delete the evidence and ignore my inquiries, perhaps hoping I’d just go away. He’s appeared on several local news programs promoting his “breakthrough” ghost photography, yet these have been nothing more than fluff pieces; no one has asked him the difficult questions or gone along to observe his methods. I see why; when challenged, he backed away and covered his tracks (though not before I was able to screen capture the site).

If this article reaches Mr. Scullion, I’d like him to know my offer still stands; I’ll travel to Williamsburg, Virginia, to observe (and test) his methodology. If he can demonstrate his method actually works, I’d be supportive and help him out. All he has to do is respond (but I won’t hold my breath).