How Being in Love Made My Skin Look Great 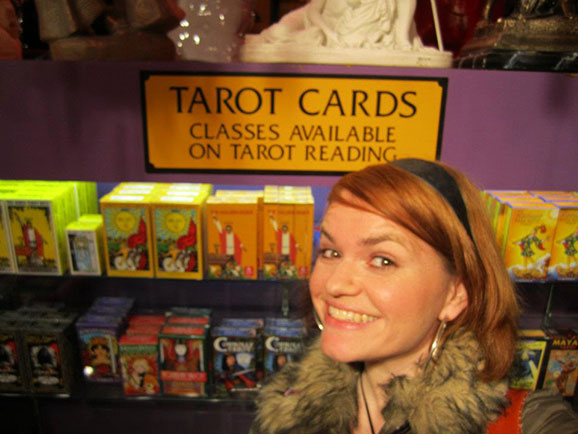 There are pictures of me in a chair shaped like a hand. They were taken at an occult bookstore, which I had visited on a story. I wanted to know what kinds
of claims tarot readers make to their customers: what would happen in the next few months, what is unique about my personality, what career I should
pursue, and who I should love—all based on some cards with pictures of flautists and Satan. 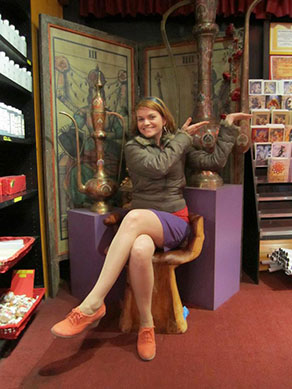 In the pictures, I am bright and glowing. In half of them, I am alone, in the chair shaped like a hand. In the other half, I am with my co-conspirator and
friend, Ross, who is there to get his fortune told, too. In all of them, I am grinning from ear to ear. My skin is clear and radiant.

Those are the first pictures I know of that were taken right after I fell in love. Minutes later, I would walk to the back of the store, and get a reading
that was exceptionally almost true. The astrologer would tell me I was a good writer and communicator, that I was a little too analytical sometimes, and
that I was in love with a person who was wonderful for me. She would also tell me that I seemed distant from my brother. I don’t have a brother.

As we left the store, Ross took pictures of me, grinning and pointing at the sign for the shop. I confess, I think I felt a little glee that the psychic
stranger inside had given me her approval of the new object of my affection, whom she’d never met. It was much easier to forget that she swore I worked as
a hostess in a Mexican restaurant (miss), when she also said I was in love with the perfect person for me (hit, obviously). 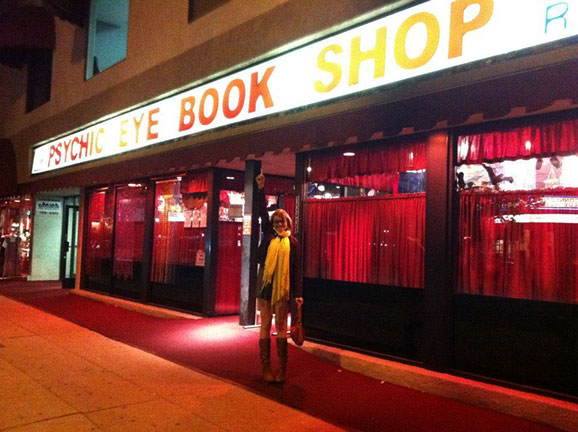 I was in the “limerence” stage of love; a term coined by the psychologist Dorothy Tennov1. Think you might be in limerence? The key symptoms are euphoria, intensely focused
attention on the one you love, craving for emotional union with the beloved, and increased energy. It was sort of like the feeling I got when I was a child
and I would go to Denny’s, and throw back a cup of cream into my mouth (something my mom would want me to tell you she never approved of). My brain would
melt into tiny spheres of golden light, and nothing would be wrong with the world for a split-second. Ah, cream of the gods. Denny’s cream. Love is a lot
like a shot of Denny’s cream.

So I started to wonder what was behind this biological and psychological experience of love. Lucy Brown, a neuroscientist for the Einstein College of
Medicine, says love is not an emotion, but “a motivation….The other person becomes a goal in life.” Her evidence is all in your head: brain scans of
people in early love show areas that are associated with reward systems lighting up; the same systems that drive us to eat when we are hungry, drink when
we are thirsty, and take a gulp of air when we get stuck under a boogie board. When we fall in love, the other person becomes not just part of our basic
enjoyment of life but, at least on a biological level, part of our basic survival, too.2 Anthropologist Helen Fisher goes so far as to say that brain scans could serve as a
sort of lie detector, proving that your spouse still loves you after twenty-five years (and plenty of her subjects do).3 I asked neuroscientist Indre Viskontas, who is affiliated with the University of California, San Francisco, what she thought of the lie detector theory.

“There's a lot of individual variability in brain function and morphology, so you can't look at one individual's scan and deduce something as complex as
love. The measurements are correlational—and they don't necessarily work backwards,” Viskontas cautioned.

But without some kind of consistent yardstick, it would seem impossible to answer questions I really want answered, like whether certain people have a
deeper capacity for love.

“It would seem so, from their behavior, but I can't experience what someone else feels, so who knows?” Viskontas says, throwing water on my certainty that
I would be the best ever at that love-brain-sensor-cum-Lite Brite.

As time went on, my affection for my beloved only grew, which I guess is how you know you’re a grown-up. Grown-ups love each other more every time
one of them leaves a piece of cake out and ants come into the house and ruin everything, because they learn something humanizing about their partners, or
about themselves, or about ants. Grown-ups turn love into a growing experience, and they become better people for it, which makes them more lovable, et
cetera, et cetera, and then you die. This experience of pouring all that affection into another person (or other persons) is thought to be universal. When
the anthropologists William R. Jankowiak and Edward F. Fischer surveyed 166 societies, 147 had evidence of romantic love (the other nineteen didn’t have
counter-evidence, but the data was unavailable).6

Chances are that if you are reading this, you too have experienced the joy of love, and the worst of love. By the time you reach college age, chances are
about 95% that you will have been rejected by someone you passionately loved.7 Since
the withdrawal symptoms associated with romantic rejection are pretty close to those for cocaine withdrawal,8 even the mention of rejection may call up the worst memories of your life (when I
was nineteen, I literally tried to learn American Sign Language to impress an ex-boyfriend whose previous girlfriend knew how to sign. I was a mess.)

But if you’re reading this, alone, with a box of wine in one hand and a box of human-grade organic dog treats in the other, take heart: even if you never
find anyone, chances are that at least you’ll die younger and be in misery for a shorter time.9 But even more likely, you’ll find someone again, and do this whole dance again, and
sit in a chair that’s shaped like a hand, and take pictures, and the world will be your oyster.

And when that happens, your skin will look so good.

1
Tennov, D. “Love and Limerence: The Experience of Being in Love,” Scarborough House, 1998.

4
Macrae F., “How lots of lovemaking makes you look up to seven year younger than your actual age,” Daily Mail UK Online, July 4, 2013.