In May 2018, I spent the night at the White Hill Mansion in Fieldsboro, New Jersey. The mansion has a rich history; it was built in 1757 and survived the Revolutionary War, during which it was even invaded by the British army looking for rebel colonial soldiers. The mansion has changed hands many times over the past two hundred and fifty years. It has been occupied by inventors, doctors, and even a State Senator. In 1923, it housed an upscale German restaurant that was often visited by New Jersey’s elite. In 1972, the restaurant was sold, and the White Hill Mansion eventually came to be owned by the Stepan Company. When the Borough of Fieldsboro learned that Stepan planned to demolish the house, the Borough purchased it and now maintains the property. The White Hill Mansion is currently on the New Jersey State Register of Historic Places. A restoration project began in 2004 and is run by the Friends of White Hill (White Hill 2018).

The mansion, predictably, has its share of ghost stories. From a basement bartender who doesn’t like anyone behind “his bar” to an alleged spirit that either committed suicide or was murdered—no one knows which, and the ghost declined comment—in the bathtub of the “bloody bathroom,” named for the bright red accents throughout the room. Shadow figures have been reported in several areas of the mansion, and objects have been said to be thrown around.

I was first introduced to the White Hill Mansion by a paranormal conference held there in 2017. I was one of the speakers and also took part in a roundtable discussion panel. Over the course of the following year, I developed a great relationship with the members of the preservation society. The staff allowed me the opportunity to investigate some of the ghostly claims and was very accepting when I found several plausible and natural explanations for the spooky experiences (Biddle 2017). They invited me back to stay the night with some of my science-minded friends, adding that we could perform any experiments we wanted. This was an excellent and rare opportunity; most locations that claim to be haunted are resistant to skeptical/science investigators having free reign to potentially solve some mysteries.

In the weeks leading up to my overnight stay, I gathered information from a few dozen ghost hunting teams that visited the mansion and claim to have evidence of paranormal activity. The most common phenomena reported from the mansion are electronic voice phenomena (or EVP). EVPs are described as mysterious voices of spirits that are only heard when a recording is played back or through a “ghost box” (essentially a radio that quickly sweeps through the stations without muting the sound). Most of the teams reported the EVPs were not just random responses; they were direct, intelligent responses to specific questions. I found this interesting and decided to take a closer look.

In my own research, I’ve found EVPs are often presented as the most “valid” form of evidence by ghost hunters. An informal poll on my blog showed 65 percent valued EVPs over photos and video. Ben Radford (2018) notes in his book Investigating Ghosts: The Scientific Search for Spirits, “After surveying the efforts and results of ghost hunters over the years it’s clear that, in their opinion, by far the strongest evidence for ghosts they have found has been in the form of EVPs.” Likewise, as Sharon Hill (2018) notes in her book Scientifical Americans, when comparing parapsychologists and amateur ghost hunters, “The amateurs embrace EMF meters, consider electronic voice phenomenon (EVP) to be a primary form of evidence….” It seems a lot of weight is put on EVPs as proof of the existence of ghosts. And alleged intelligent responses offer us a testable claim. 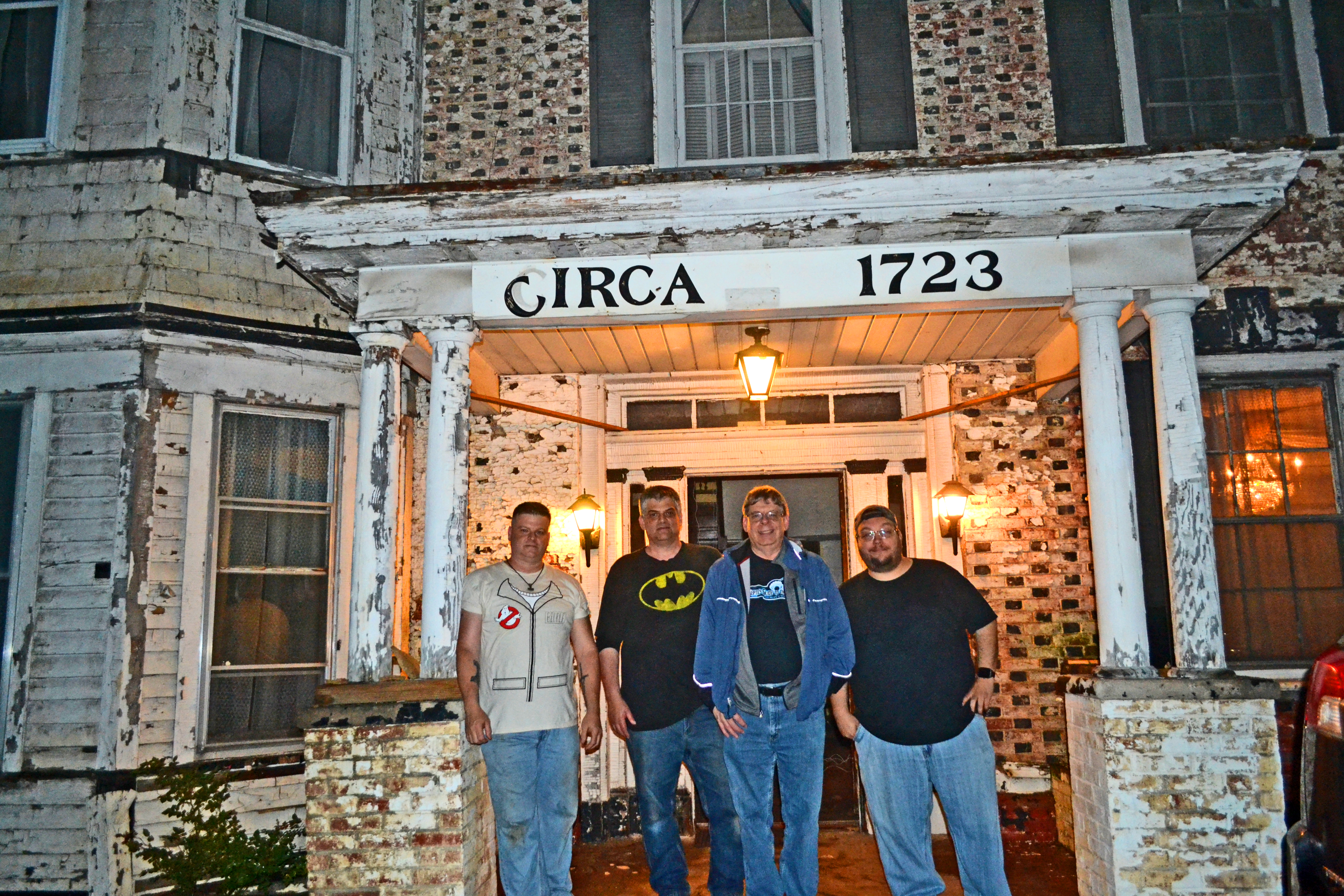 I arrived at the mansion with my friend and colleague Tim Vickers, a forensic interviewer from West Virginia. We met up with Rob Palmer, a member of the Guerilla Skeptics on Wikipedia and fellow CSI columnist, and Chuck Sanders, a video producer and photographer. After a short tour of the mansion, I spoke with Loretta (president of Friends of While Hill Mansion) about our experiment (which was originally Tim’s idea); we wanted to try and find a hidden object through the use of EVPs.

I handed Loretta a small foam ghost (a squishy toy named Spooky) and explained that while we waited across the parking lot in the office trailer, she was to hide the toy ghost somewhere inside the mansion. As she walked around deciding where to hide it, she was to speak out loud and inform the spirits (if any were around) what she was doing, what the object (she was hiding) was, and that she needed the spirits to tell us where to find it. The idea was simple: if there were cooperative ghosts here and they could communicate with direct, intelligent responses to our questions, then they should be able to lead us to the hidden toy. 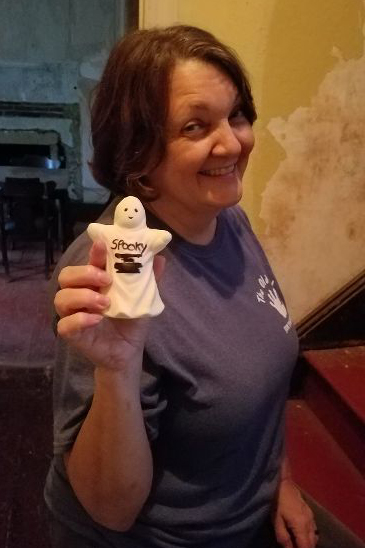 Loretta Kelly, historian and president of the Friends of White Hill Mansion

We used three different recording devices and went floor-by-floor; the basement bar, the restaurant area on the main floor, the main bedroom on the second floor, and finally the central room in the attic. We spent about ten minutes in each area asking questions (to whatever might be listening) and listening to the replay for any voices that didn’t belong to us. Unfortunately, our questions went unanswered, and we never found poor Spooky.

However, this gave me an idea: Why not challenge the ghost hunters that claim to get such EVPs to perform the same experiment? For most of the past decade, I’ve been following the claims of others; investigating and solving the “unexplainable” evidence that has been presented. This time, I wanted to challenge the ghost hunters to actually prove what they claim to get: direct, intelligent responses from ghosts. In this case, ghost voices telling them where a specific object was hidden in the house. 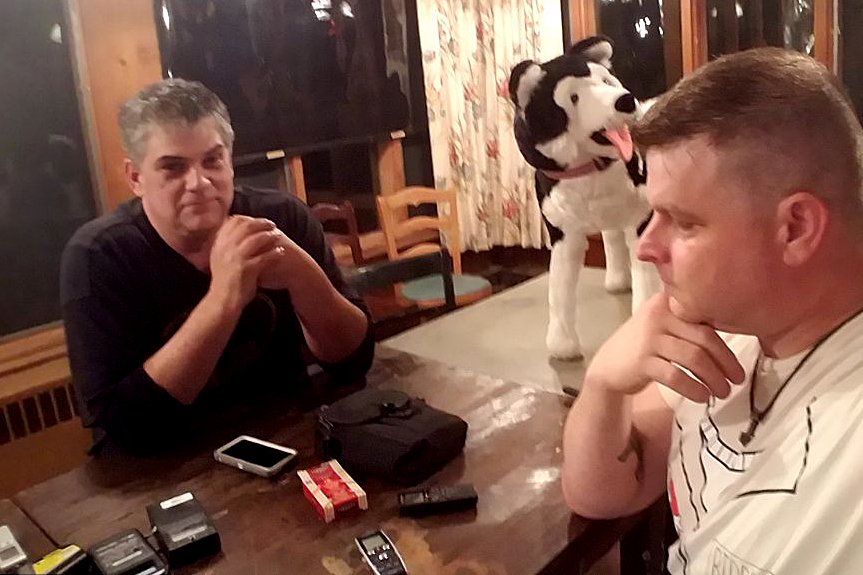 Tim and Kenny trying to get the spirits to tell them where their ghost toy is. 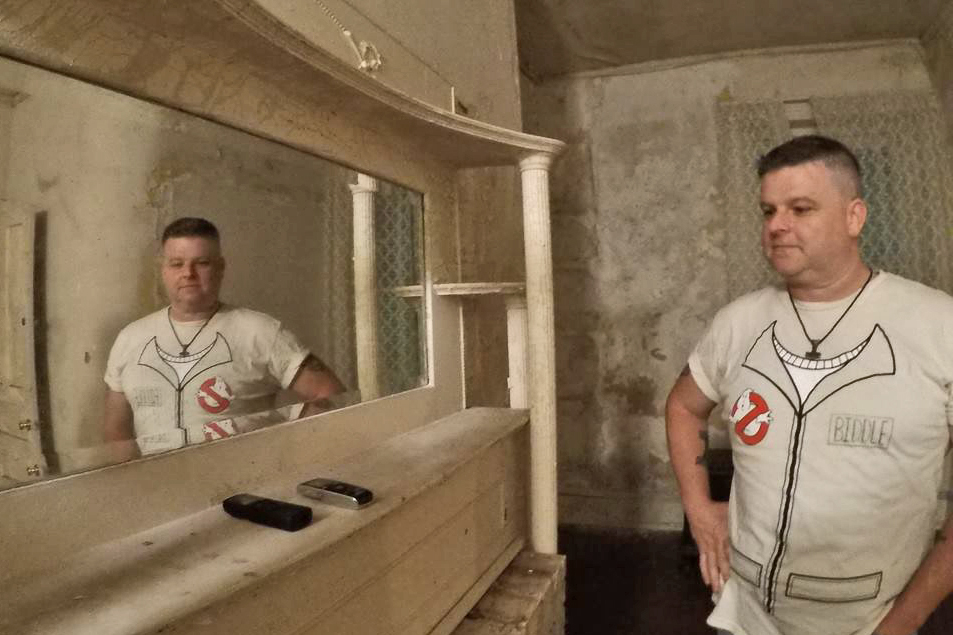 Ghostbuster Kenny in the main bedroom trying to talk to ghosts (they weren’t talking back).

And to make it interesting, we would follow in the footsteps of James Randi and offer a cash prize of $100. I spoke with Tim Vickers, and we developed a rough draft of rules for participation that would be fair but also prevent any cheating from participants and us. I reached out to Jim Underdown of CFI’s Independent Investigations Group (IIG), which has an ongoing $100,000 challenge for anyone who can demonstrate paranormal abilities under controlled test conditions (IIG 2012). Underdown graciously offered his expertise and helped us refine the rules, as well as kicking in an extra one hundred dollars.

Once we were all satisfied the test conditions were fair, it was time to hide the target object. I made arrangements with the White Hill staff to have the mansion all to myself for a few hours. I acquired a target object and carried it into every room on every floor of the mansion. I spoke out loud (and had video recording me the entire time), proclaiming who I was, what I was doing, what the name of the target object was, and exactly where it was going to be hidden. I have no doubt that if ghosts are haunting the mansion (granted, if they exist at all), they heard me.

I placed the target object in its hiding place and snapped a few photographs. Those images were printed and paired with a written description of the object and its location. Two copies were made and triple sealed in envelopes with several tamper-proof security measures. One copy was given to the Friends of White Hill for safekeeping, and the other was given to Tim Vickers. This measure was to ensure I could not replace or relocate the target object, since I’m the only one who knows what it is and where it is.

On June 30, I posted a video announcing the challenge and what it would take to win the cash prize (Biddle 2018), which was now up to $300 after the White Hill staff kicked in an extra hundred. The challenge is simple: if a team (or individual) can submit an unedited, continuous video of them conducting an EVP session, obtaining EVPs that clearly tell them what the target object is and where it is hidden, they win the prize. (There are additional rules, so be sure to check out the video listed in the references and on the White Hill Mansion website.) This really shouldn’t be too difficult, because it’s basically what ghost hunters are already doing—asking specific questions and claiming to receive direct responses.

There’s been a lot of interest over the past month, with several requests coming from groups overseas about replicating the challenge in their local areas. Although I have serious doubt that anyone will claim the prize, I think this is a good opportunity for ghost hunters to put some solid data behind their claims. If a team gets an audio recording (or voice coming over a sweeping radio) that tells them the name and location of the target object—both of which are completely unknown to everyone but me—I’d be pretty impressed. I would also be out $300. So, who’s up for the challenge?

Update – After I sent this article over to Benjamin Radford for editing, he found the idea very interesting and wanted to contribute. He sent me a message stating “I’ll pitch in $200 for the reward on the EVP test.” This brings our cash prize up to $500.