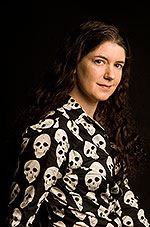 A man enthusiastically bounded up to introduce himself with a hug and I immediately took three steps backwards. The time was 2005, the place was The Amazing Meeting 3 in Las Vegas, and I was on my honeymoon. With someone else, just in case you were wondering.

I’m not accustomed to being embraced, certainly not by strangers and especially not by men I don’t know. Yet this was different context—I suddenly realized that I “knew” this man from an online forum board. Within a day I was signing my name to a shirt as if I was some kind of skeptic celebrity, joking about my friend’s choice of career as a stripper and peering flirtatiously through the borrowed eyeglasses of someone who would later become my best friend.

About thirty attendees of TAM3 bonded through online interactions for six months or more before the event—some didn’t even reveal their real names. It didn’t matter in the slightest to us; on the last night we filled four long tables in a restaurant and vowed to return another year.

For many, it never happened. Some of the people from that first Amazing Meeting I attended have gone on to achieve many things in the name of skepticism. However, some of those attendees have disappeared forever from the scene or “lost their way” in disappointment and recrimination. Quite a few of those people were women; some of them no longer call themselves “skeptics.” The year is now 2011 and today I opened an email to read news about a code of conduct for this year’s “Amazing” gathering:

We are all subject to confirmation bias, to taking a position and not budging; we all have more to learn about applying skepticism to our own views. But being unwilling to discuss these topics without recourse to personal attack or threats is counter to our goals as a skeptical movement.

The JREF takes sexual harassment seriously and we take women’s voices seriously, because we know that we are more effective as a movement when half of humanity’s talent, knowledge, and experience is not ignored. That’s why we have worked to make sure that at The Amazing Meeting this year, more than half of our main program talks are by women.

We’ve printed a statement in the front of this year’s conference program that makes it clear that sexual harassment and other forms of harassment are not acceptable at TAM.… We’re discouraged to see the depth of division in our movement that has been brought to the surface by recent statements by various leaders, but we are optimistic that the conversation and debate will generate more light than heat. We believe that an open discussion of sexism and harassment will ultimately strengthen the skeptical movement.

While there have been many women actively involved in skepticism whose names can be easily found, my initial investigation as to whether it’s predominantly a token gesture or genuine acknowledgment of their contributions as equals has produced mixed results. In skepticism, the double-X chromosome is not queen; the broader landscape of gender politics is inescapable and influences how we interact with others and ourselves and how we progress.

In 2008, I was more optimistic about how skepticism had progressed in regards to the treatment of women, having compared a variety of historical documents online. I read of “CSICOP’s Rational Feminist Alliance” of 1997, with about ten women and four men presenting

…talks on disability politics, multiculturalism, creation/evolution politics, and others, which, while important, fascinating, and thoroughly enjoyed by conference participants, were far off from the stated purpose. Anyone looking specifically to discuss gender politics in science may have been, at the very least, a bit confused. However, this did not seem to concern either participants or speakers. In fact, “complaints” were practically nonexistent. [my emphasis]

This review reflects something that Sara Mayhew sees as important in 2011’s Amazing Meeting 9 in terms of contributions now and in the future:

One practical action has already been implemented at this year’s TAM; there seems to have been a conscious effort to invite more women speakers to conferences. One of the biggest and most easily remedied problems—not just at skeptic conferences, but society in general—is simply exposing everyone to more women. As writer, I often speak about the benefits of more depictions of female characters in comics, TV, and movies which demonstrate that women are just people. Think of the wide variety of male characters we’re exposed to and then the very narrow options for female characters. For this reason, I’d like to mention that I don’t want to see more women at skeptic conferences just talking about women’s issues—we need to see more women talking about the same variety of topics that our male counterparts do, just like this year’s TAM lineup offers.

Of course, our experiences may differ for many reasons: Dylan Keenburg of “Woo Fighters” reported from TAM8 that “Harriet Hall noted that she has never had discrimination experiences within the skeptic community,” while “Pamela Gay argued that by working toward integrating gender parity and cultural diversity into the skeptic community, there would be more diverse role models and that would result in skepticism reaching more people in the United States.”

While it’s a contentious topic, civility and social norms have been explicitly addressed at many conferences—from the famous Phil Plait “Don’t Be A Dick” talk at TAM8 to the less attended but still vital “Don’t Be That Guy” panel at Balticon (as reported by the Geologic Podcast). Some of the more heated debates online have revolved around the relative importance of tone and creating conducive atmospheres when discussing skeptical matters; many of these have been documented by Daniel Loxton on Skeptic Blogs in his post “The Science of Honey and Vinegar.”

How social behavior influences the participation level of women has been discussed at least since the 1980s, as shown in “CSICOP and the Skeptics,” originally published in the Journal of the American Society for Psychical Research by George P. Hansen:

Coulman wrote another column in the June issue asking the same question, noting that no women had yet replied. Finally, months later, Elissa Pratt-Lowe (1985) responded:

I think another aspect of organized skepticism that may deter women is the aggressive, “macho” attitudes held by some of the (male) participants. It seems to me that some “skeptics” are more interested in ridicule than in exploring and challenging pseudoscientific beliefs. [This was followed by “Very true, I think-MC”] (p. 7)

The Bay Area Skeptics are not the only ones to confront the problem. In response to an article by physicist George Lawrence in Rocky Mountain Skeptic, John Wilder (1988) wrote: “For all of the author’s [Lawrence’s] scientific, academic and intellectual credentials, he displays a level of disrespect for others that, in my opinion, is completely inappropriate.… The author succeeded only in subjecting a group of sincere … people to outright ridicule.” (p. 8)

The issue of comfort around male skeptics was also raised in a section entitled “Where The Girls Aren’t,” in a 1999 article by Jeanine DeNoma on “Local Skeptical Groups,” which cites Sheila Gibson:

Gibson raises the point that “maybe skeptical women are just different?” She quotes one woman who said, “Women who participate don’t necessarily have a science background and they don’t fit female stereotypes. They seem comfortable in groups of men. Being the only woman doesn’t bother them.”

Just being a skeptic, male or female, probably means one is at least somewhat comfortable being out-of-step with the mainstream. One reward for affiliation with an organized skeptics group is the interaction that occurs among seriously-mindful and thought-challenging skeptics. [Emphasis mine.]

A 1996 article by DeeAnne Wymer on “Why Are There So Few Female Skeptics?” suggested why women may not be so eager to involve themselves in skepticism. It noted, “Family and work demands leave women with little time for any outside activities; sexism among male members creates an unpleasant atmosphere for women; groups seldom focus on topics of interest to women; skeptics are generally recruited from the sciences, fields with fewer women.”

A wonderfully insightful article by Josh Rosenau on the blog Thoughts from Kansas, “A Pedestal is as Much as a Prison” gives advice on what part men can play in encouraging a supportive atmosphere:

I can also, and this is a different topic, think about ways to change my own behavior and that of other guys, to make this less of a problem. If I see a guy acting like a douchecanoe, I can call him out on it. Maybe privately (which is more likely to actually change the guy’s thinking), but maybe in public, so that other guys know that folks are watching, and so that women know they aren’t alone in this.

While speaking out can have a better chance of creating a snowball effect of change, you can also vote with your feet. Since the early days of The Amazing Meetings, there have been ongoing efforts to encourage more women to attend and present on stage, from a number of people both within and outside of JREF. I personally feel that efforts to create skeptical events in cafés and libraries, groups like the UK’s “Ladies Who Do Skepticism,” and skeptical parents (not only blogging and podcasting, but presenting and doing workshops at conferences!) all demonstrate excellent efforts towards rectifying some of these problems.

Suggestions to hold alternative conferences have been eagerly adopted, with “un-conferences” like the previously mentioned SkeptiCamps and long-running events such as Dragon*Con and Balticon featuring fine examples of inclusive skeptical content. Dragon*Con’s Skeptic Track in particular has featured several panels on gender issues over the years featuring both men and women, with a range of topics that are open to both official guests and eager skeptics who apply to present.

The fight to acknowledge women’s equality and challenge sexism isn’t new and isn’t unusual in society and certainly not in skepticism. There have been plenty of men as well as women, writing, speaking and presenting online and at conferences about the need for gender equality, for quite some time. Certainly, these voices have been heard and recognized as valid, some more than others. The growing popularity of and opportunities to attend conferences and meetings are clearly influenced by online interactions—our conversations and comments appear worldwide rather than in our hometowns, and civility isn’t just about talking to people who aren’t skeptics or atheists.

While I may never have again the same sense of collegiality and support I once felt when I thought I was with skeptically-minded friends, I will not dismiss how feeling the same way might contribute to the progress of other men and women of skepticism in the future.