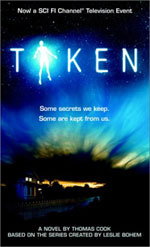 For those planning to watch all ten episodes of Steven Spielberg and the Sci-Fi Channel’s new UFO-centered miniseries Taken, airing December 2-13, I have no intention of spoiling the plot. Still, I can’t resist pointing out one annoying detail. Though it’s probably the glitziest and most epic fictional treatment of alien abduction claims to date, Taken nevertheless borrows a rather tired motif from its predecessors: The introduction of a “debunker” character who is conveniently made to see the light in the course of the drama, and by the end renounces his or her skepticism.

In Taken, the born again believer is Tom Clarke, played by Ryan Hurst (Saving Private Ryan, Remember the Titans). A master of card tricks and sleight-of-hand, Clarke starts out as a skeptic of UFO claims and later becomes a “well-known alien debunker” who, among other things, creates a deliberately hoaxed crop circle in the shape of a peace sign. But after he learns a deep secret from his half-alien half-brother Jacob—would that every skeptic had an extraterrestrial in the family—Clarke renounces his skepticism.

The promotional materials for Taken contain the following explanation of Clarke’s character from script author Leslie Bohem: “The Clarkes, specifically Tom Clarke, came about, in part, because I was fascinated by debunkers and I’ve never really seen much about debunkers.” Bohem must have missed The X-Files, in which agent Scully represented the “debunker” camp—not to mention a slew of other films and mini-series drawing on claims of the paranormal, from Signs to Dark Skies. Skeptic characters have often appeared in these fictional stories, and the same thing happens to them virtually every time. Either they get converted outright, or their skeptical stances are otherwise undermined.

I hate to sound thin-skinned, but just for comparison, imagine the uproar if every time a Jew was featured in a film or mini-series he or she converted to Christianity by the end. Indeed, when it comes to fictional representations of skeptics, the screen writers and directors of paranormalist dramas have truly had no shame. Perhaps the most egregious example of a skeptic conversion via fiction, described previously in Skeptical Inquirer magazine, came in an episode several years ago of the flopped NBC television series Dark Skies. The show introduced a fictional version of Carl Sagan, and then made this archetypal doubter of UFO cover-up claims privy to high-level government UFO secrets. The fictional Sagan then goes on to use the Search for Extraterrestrial Intelligence program (SETI) as a way to find out which planets the aliens are coming from, all the while remaining complicit in a government conspiracy to suppress the truth. The episode came out just half a year after Sagan’s death, which is some indication of just how thoughtless and insulting the trend of converting skeptics through fiction can get.

And Taken and Dark Skies hardly exhaust the genre. As previously mentioned, The X-Files drew upon the tension between skepticism and belief to great effect. But sure enough, late in the series’ run Dana Scully was officially converted from a skeptic into a “reluctant believer.” Given the hordes of paranormal creatures that paraded through The X-Files, of course, it’s hard to blame her. Indeed, several studies have shown that the transition from skepticism to credulity has been a dominant theme of much of our entertainment, particularly in the horror and suspense genres. But when a wide range of fictional representations all converge on a single stereotype—in this case, that of the closed-minded skeptic—it’s a pretty obvious sign that something isn’t completely right with our culture.

To make matters even worse, it’s often the case in paranormalist fictions that characters literally have to renounce their skepticism in order to save their own lives and those of loved ones. In this respect, perhaps the epitome of conversion fictions was M. Night Shyamalan’s summer of 2002 film about crop circles, Signs. The entire movie revolves around the religious doubts of a man of the church named Graham Hess, played by Mel Gibson. In the middle of the film, Hess tells his brother Merrill that there are “two kinds of people in the world": Those who think everything that happens is mere coincidence, and those who think it’s all knit together into a greater, providential plan.

At this point in the drama, Hess stands firmly in the first camp. Yet by the end of the film—thanks to an interplanetary alien invasion that turns out to be intimately and non-coincidentally connected to the grisly accidental death of his wife, his son’s asthma, and his daughter’s concerns about their drinking water—Gibson’s character uncovers a deeper pattern behind events that had previously seemed merely coincidental. This discovery allows him both to protect his children from the malicious alien invaders and to regain his religious faith.

It isn’t hard to make a movie that proves the controlling existence of God, because the writer/director of a movie is its god. He or she has determined the outcome, fashioned the people, and arranged the mise en scène. He or she has said, “Let there be light.” Details can be planted early that will pay off later; a deus ex machina can be lowered on cue…If there is a God, He doesn’t work in such facile, B-movie ways.

The same could be said of the treatment of skeptics in dramas like Taken. I mean, does anyone really think that real-life skeptics would maintain their doubting stances in the face of the kind of evidence with which their fictional counterparts are presented?

I, for one, certainly would not. Give me an alien brother, access to top secret UFO corpses preserved in gooey vats, or anything else along these lines, and I’ll be the first one in line to buy Whitley Strieber’s next book—or write my own. The canonical skeptic conversion narrative, after all, is the gospel story of “Doubting Thomas,” who refuses to believe in the Resurrection until Christ invites him to touch the hole where Christ was wounded while on the cross. Today’s skeptics are Doubting Thomas’s heirs: Give us proof like this and you can bet that we’ll convert too.

In the meantime, however, the real-world existence of skeptics cannot simply be explained away as some sort of odd epidemic of closed-mindedness. The fact of the matter is that real life presents a much better case for skepticism than the world of paranormal fiction does. Until these fictions grapple with this, they may succeed as entertainment but will hardly count as very thought-provoking.

And after all, there is another way. Even though it had its wishy-washy moments, the 1997 film Contact (based on Carl Sagan’s novel) presented a character, Ellie Arroway (played by Jodie Foster), whose atheist/skeptic views did not change over the course of the drama—a Thomas who kept on doubting. Through her character, Contact shattered the mold of paranormalist fiction. It’s too bad that the creators of Taken were unwilling to take up the gauntlet that Contact laid down.

Chris Mooney is a science and political journalist, blogger, podcaster, and experienced trainer of scientists in the art of communication. He is the author of four books, including the New York Times bestselling The Republican War on Science and The Republican Brain: The Science of Why They Deny Science and Reality. He blogs for Science Progress, a website of the Center for American Progress and Center for American Progress Action Fund.

Other Articles from Doubt and About

The Next Big Storm