I don’t typically use Facebook for its intended purpose. If I want to start a political argument with someone, it’s going to be face-to-face so I can look that no-good America-hater straight in the eye. This is harder these days, even though we’re all more stressed out than usual, so I recently succumbed and argued with a stranger on the internet—as politely as I could.

But this isn’t a political post despite the players involved. Deep down, at the heart of it, this is a story of our old, constant enemy—cognitive dissonance—and how pernicious it really can be.

My wife’s aunt had shared a HuffPost op-ed titled, “I’m An ER Doctor In NYC. Trump’s Coronavirus Plan Isn’t Just Dangerous, It’s Deadly,” in which the author explains the diminishing amount of medical supplies in her hospital due to the COVID-19 epidemic. The ER doctor says, “I will soon be forced to make decisions about who deserves a shot at life and who I will allow to die, and that is an unthinkable thing to have to consider, much less do.”

It’s an anecdotal report, of course, but New York Mayor Bill de Blasio said on March 29 (The New York Times 2020) that city hospitals only had about a week of supplies left. Also, the lack of ventilators, used to help deliver air to patients who can’t breathe on their own, has been well-documented. A Facebook friend of the original poster responded:

Even as someone who deeply cares about truth, I thought “whose plan is it?” was an odd distinction to focus on. And yeah, the article made it pretty clear why a lot of people were going to die. I did a little digging to provide some context. 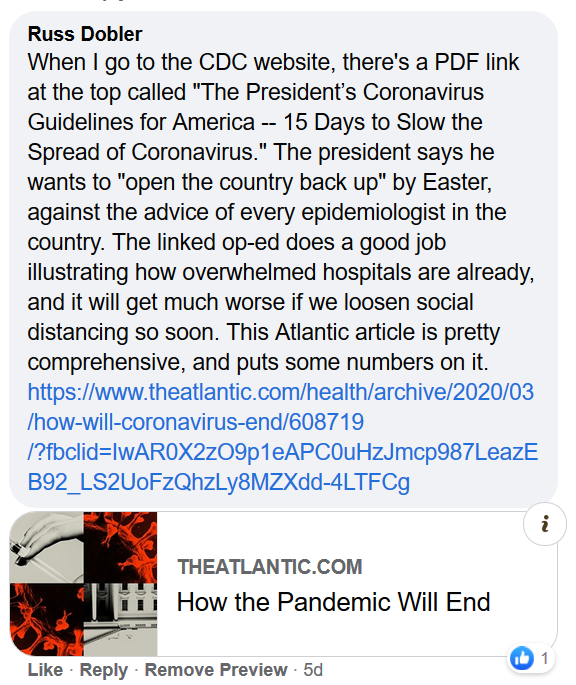 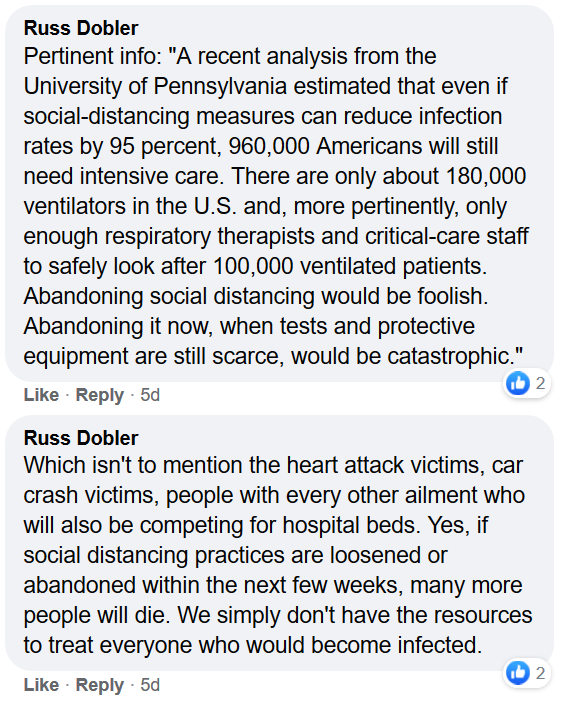 At this point, I’m trying to not make any assumptions. Maybe the friend just wasn’t thinking along those lines, but the next response seemed a little like backpedaling, so I thought to make an earnest statement that could potentially bring the reality of the situation home. 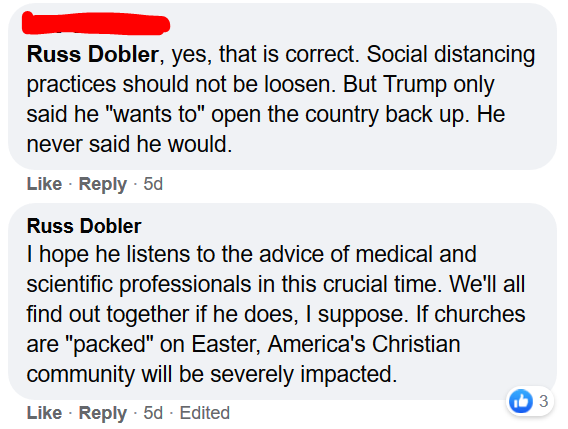 Of course since then social distancing guidelines have been extended through April 30. In any case, I figured that was a little less confrontational then the original poster’s, “I wish he would stop talking!!!!” We should all know by now that method usually isn’t going to help the person you’re speaking with. Maybe the friend was feeling comfortable after all, because some personal information came next.

Oh, no. Oh, please. Tell me I’m wrong about what’s coming next.

Goddamnit. Just … man, that hurts. In case you missed it, hydroxychloroquine is the drug President Trump suggested was a COVID-19 “gamechanger” on Twitter, presumably based on the one, non-double-blinded French study that showed promising effects, research that was announced via YouTube rather than in a scientific journal and the data of which has not been released. Even in the best of conditions, one study doesn’t tell you much, so maybe we shouldn’t be going all in on one that had people drop out from an already small sample size.

Especially when the drug studied is being repurposed from its already approved uses against malaria and the autoimmune diseases lupus and rheumatoid arthritis. The FDA has pushed through authorization that permits doctors to prescribe hydroxychloroquine for COVID-19, leading to unexpected shortages in availability for patients who regularly take it. Another recent, better study from China shows that hydroxychloroquine may help those with mild or moderate (but not severe) cases recover, but is that enough reason to deprive people of their normal medication?

Maybe the friend doesn’t know about these things going on behind the scenes. 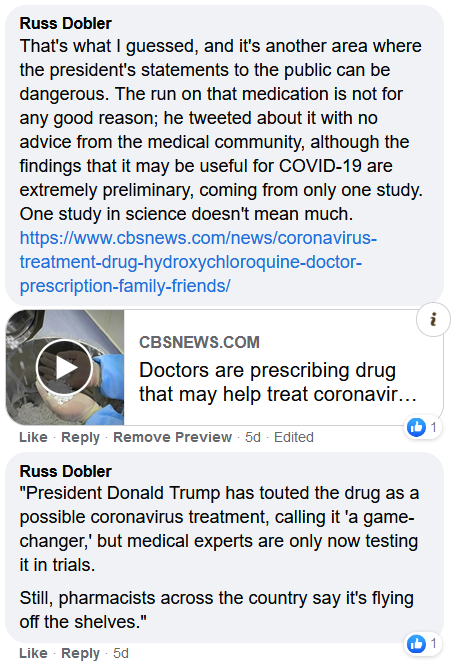 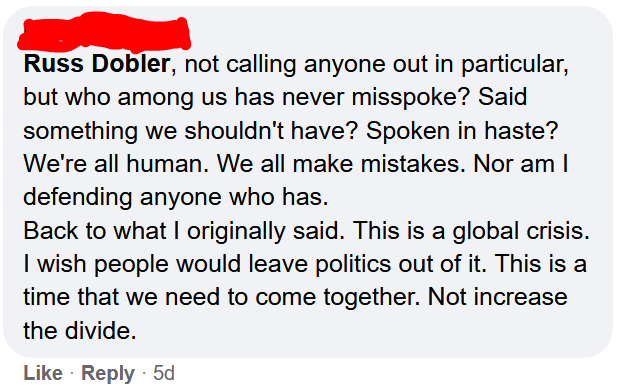 I wasn’t “calling out” the president either. I was just stating the facts of the matter. And I thought I’d been pretty pleasant, too, as Facebook arguments go. I guess it goes to show just how powerful cognitive dissonance is. In this particular instance, the poster was directly impacted by the harmful actions of a person they follow (Trump), but the poster couldn’t accept that person was in the wrong (or, at least, wasn’t thinking about the consequences of his words). I agree that people make mistakes. That’s fine as long as we take responsibility for them.

I didn’t get another response.

Other Articles from The Thoughtful Conduit

The End of Ufology? The Information Age Is the Best and Worst Thing for Believers

NECSS 2019 Brings Something Different to the Scene

That Time a Raping Demon Appeared on Cartoon Network: The Popobawa